Another composite posting here – this encompasses work from the last couple days. Productivity is kind of difficult when we’re getting highs up near 100…at least on the weekends I can get an early start art and beat the heat a bit, but weekday evenings just end up being sweat-drenched affairs. Anyway, with those tough close-tolerance outboard bolts installed, the next prep step was installing the upper brake fittings on the legs. Those came in as expected, along with the thread sealant I needed, so I got those installed.

I also went ahead and pulled out the main wheels, tires, and tubes, and set about assembling those. Aircraft wheels are an interesting affair; they split down the middle and get assembled into the middle of the tire-tube combination. Also, the only experience I had with inner tubes was with bicycles as a kid, so there was a bit of a learning curve here. All told, though, it was pretty straightforward. I think I spent about an hour on the first one and 15 minutes on the second.

That left today for the real fun. My shiny new engine hoist did its duty in raising the front of the plane, and I got to work underneath. I was expecting it to be a two-person job to get each leg in place, but it turned out to be pretty easy to manage alone. About the only hangup I ran into was forgetting to grease the inside of the first saddle bracket I installed, requiring a bit of backtracking (the grease is just for corrosion prevention). I only had to recruit Josie’s help for actually torquing the inboard bolts, since that requires one person holding the bolts from beneath while the other tightens from above.

The final step was really the most tedious – torquing the critical outboard bolts. These nuts are to be tightened until the gear leg is clamped between the saddle and the wear plate, and then the nuts get gradually torqued, increasing 5 in-lbs at a time, until the final torque of 240 in-lbs is reached. So basically it’s a repetitive process of turning each nut, adjusting the wrench, and repeating – about 20 times per side. The desired result is for the brackets to sit clear of the wear plate by about .030”, which worked out fine for me.

At this point, it was another one of those times to go through an assembly step for the sole purpose of motivation, ie seeing something especially airplane-like. So I got out some hardware-store temporary bolts I’d bought previously, bolted the axles onto the legs, and then installed the wheels. Then I had the great fun of rolling my airplane fuselage out onto the ramp for a photo op. (not to mention a good thorough sweep under where it’s been sitting for some time) 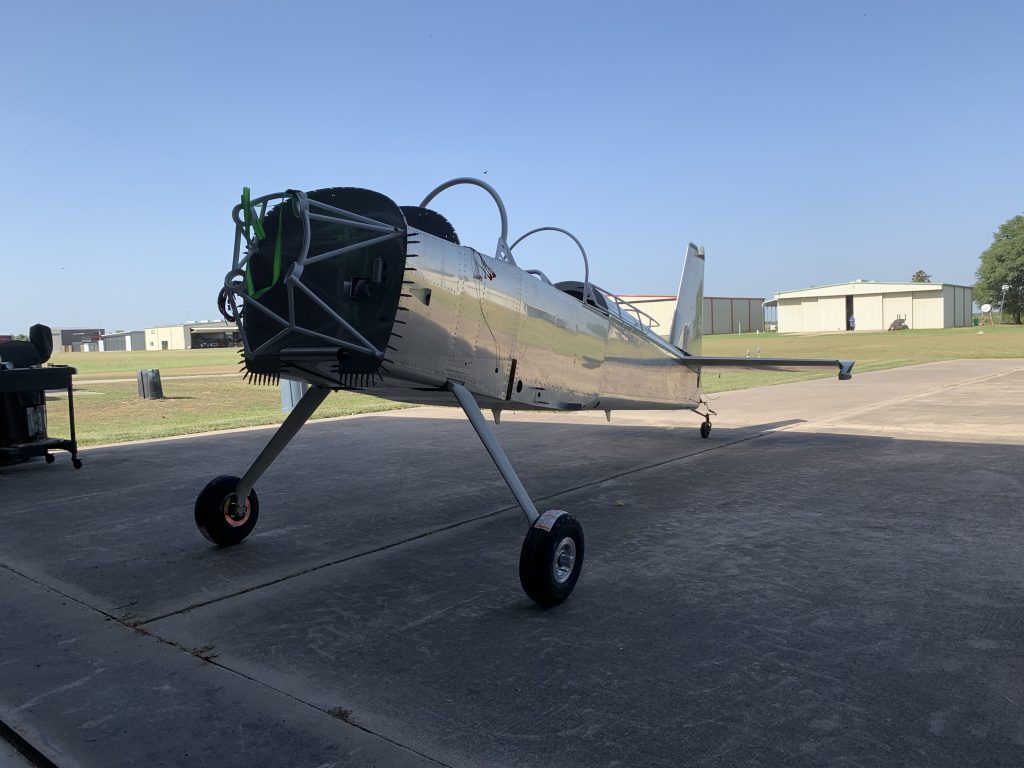 The wheels aren’t going to stay on, though – as fun as it is to have them in place, it makes the fuselage sit even higher than it already does on the legs alone, and the wheels will have to come off for stuff like brake setup and so forth down the road anyway. So my plane is to build some temporary shop wheels to go on the legs. I’d originally thought about using dollies, but I think I can build something that’ll take up less space while still providing large enough wheels to go over the lip to the ramp if I need to move the plane. I’ve already got a loose plane in my mind, I’ll just need to snag some parts, maybe while we’re out tomorrow.

In other news, I got to looking at the engine some more today, mainly thinking about what I might want to do prior to hanging it for the first time. Seems like it’s probably a good idea to get some of the rear-mounted accessories in place, like the prop governor and standby alternator. This also includes the ignition coil mounts, and this is where today’s fun came in. When I ordered the CPI2 system, I specified one magneto coil mount for the lower spark plugs and a mount for the top of the engine case for the upper ones. Unfortunately the fuel injection lines on top of the engine are going to interfere with that case top mount, so I need to get with the SDS folks about ordering a second magneto mount. I also need to get some retaining clamps to actually hold the magneto mount plates to the engine – got to figure out what I need there.

Basically, my short-term plan is to reinstall the interior brake lines, then fabricate the short ones to connect to the upper gear legs. I may go ahead and do the rest of the interior plumbing, including mounting the pedals, but I’m not quite sure about that. Once I get to a stopping point on the brakes, I’ll probably be getting that engine hung for the first time.