So technically, the most reasonable next thing for me to work on after adding the gear legs would have been the brake lines, but…well, I couldn’t resist the allure of getting the engine off its pallet and attached to the engine mount. This was never intended to be a permanent arrangement, but with the engine and mount married, I can install/remove the assembly with relative ease.

Yesterday, while out, I picked up some lumber and other supplies and built out an engine stand. This stand has four bolts that match with the firewall side of the engine mount, and I’ll be able to store the engine on that while I work on mounting accessories to it as well as building out the firewall. Once that was done, I got to work on actually mounting the engine.

I first attempted to put the engine on the mount with the mount on the firewall, but it was clear that wouldn’t work without removing several parts. There was no way to slide the engine straight into the mount ring without the oil filter, fuel pump, and prop governor line interfering. Some more trial showed that with the engine hanging on the hoist, I could maneuver the mount over it if I detached the output line from the fuel pump.

This afternoon, with some help from a neighbor and my father, who was visiting, we were able to maneuver things such that that fourth mount got installed, which was a real moment of victory. In barely over a week this project has gone from a canoe on sawhorses to really starting to look like an airplane.

That was the end of useful work for the day, but I was unable to resist the opportunity to temporarily mount the prop as well, just to make for an even shiner picture: 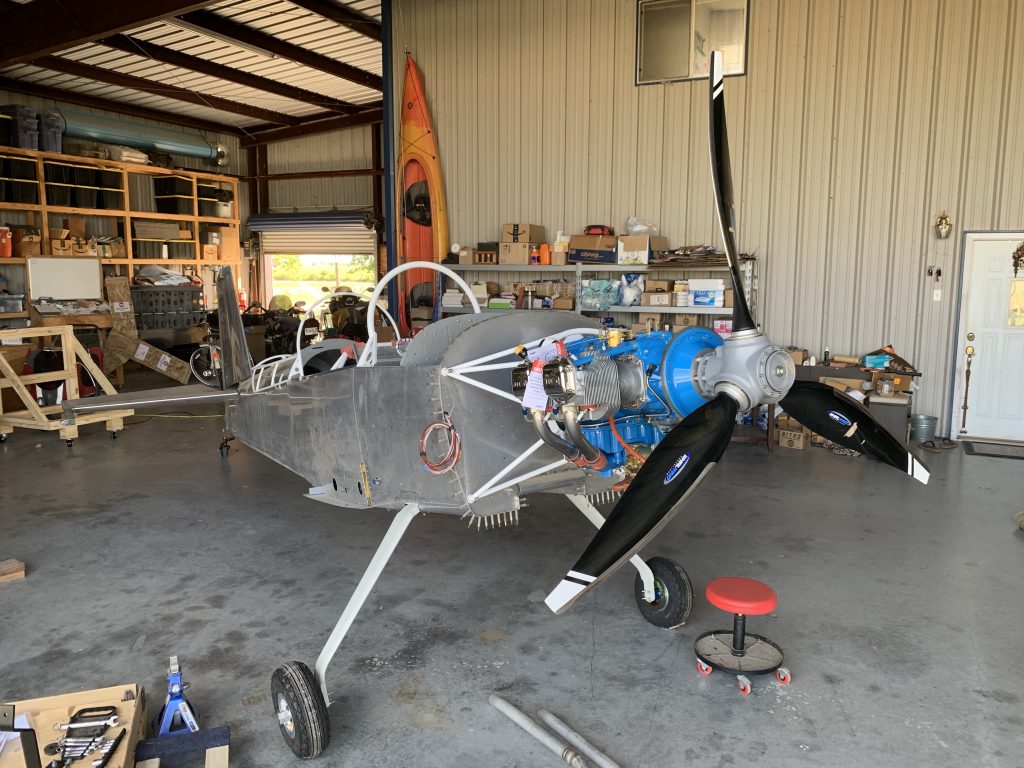 Unfortunately, that will probably be the end of productivity for a bit. We’re heading out on vacation this Friday, so I think this week will be taken by preparation, and once we get back I’ll only be home for about a week and a half before I head up to Oshkosh. I have a few odds and ends I’d like to get done in that time – most notably, some more testing of my intercom setup. A friend lent me his Lightspeed Zulu headset to test with, in order to see if the feedback problem happens with two different Lightspeed sets. If that band out, then I’ll feel pretty confident going to Lightspeed with my concerns.