OK, that title might be premature, but I don’t think it will be. Let’s just say that my first attempt doing some micro filler work didn’t go so well.

First on the docket was picking up with the rudder light cutout area. Ripping off the peel ply revealed a nice new surface, but with a fair bit of overhang. It probably would have been a good idea to trim that glass a bit before it set, but oh well: 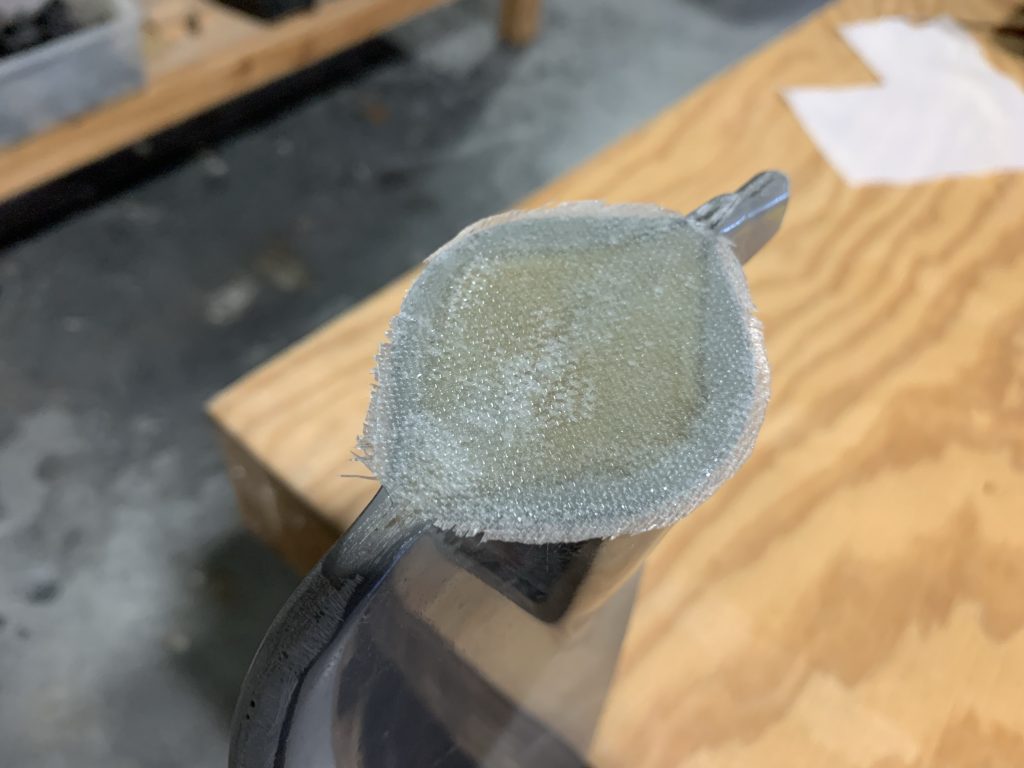 Next up, time to remove all that extra material on the edges and sand to roughly match the profile of the bottom. Since my intent was to cover all of this with micro, I also beveled the edges a bit and sanded off the gelcoat a little ways back. I figured I’d have my micro wrap around to the bevel a bit, and then it could all be sculpted to match later on: 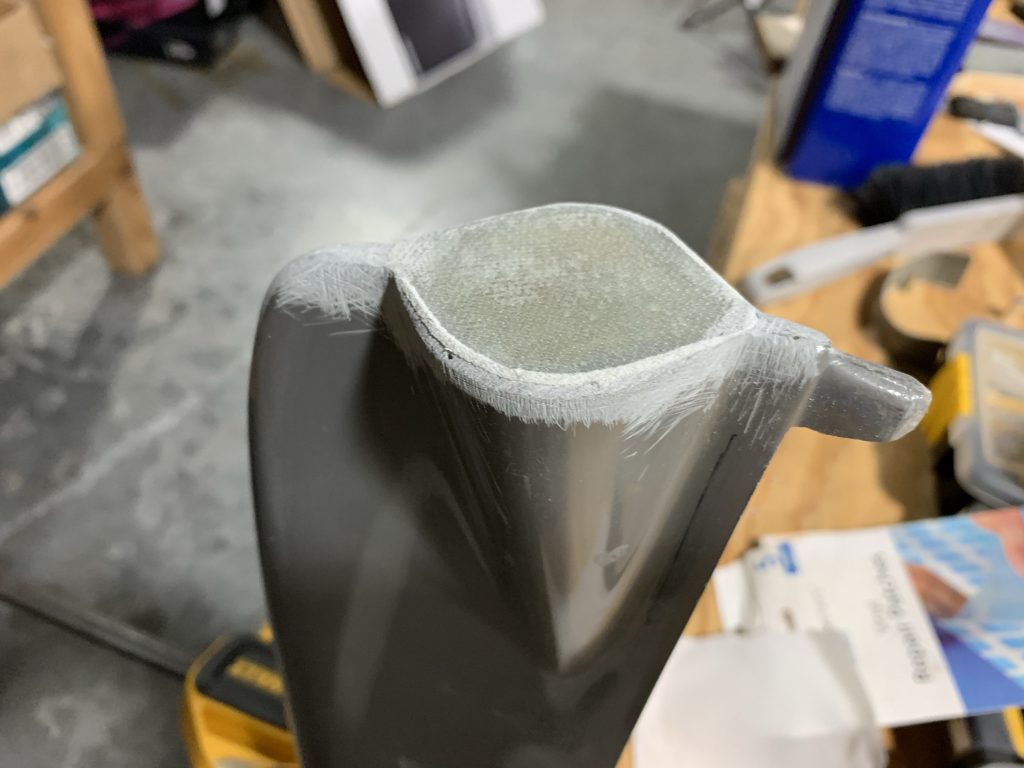 It was somewhere along the line here that I started to think that I kinda jumped into the deep end in terms of glass work. The shape here is kind of complex, especially the small-radius inside curves where the upper/lower edges of the light flare meet the narrower main fairing shape. Even at this point I was thinking it might prove to be challenging to sand this back to a nice shape when everything was said and done.

Anyway, I also pulled off the vertical stab tip and examined the bonded-in balsa filler. My intent with this piece was to add some glass plies on the inside to reinforce the joint, and then use micro to fill out the area between the balsa and the actual tip end, which I could later sand down to match nicely with the rudder tip. I went after the plies first, and that part went fairly well, though working with that stuff in the tight confines was a bit fun. Might have been easier if I’d pre-wetted the glass like I did before, but for reasons I’m not sure about I decided to wet the glass in place.

I almost decided to call it a night right there, but I really wanted to get the micro work done so I could have some cured stuff to work with for my next session. The first comical thing here came when I mixed up a couple pumps of epoxy and then started adding the micro balloons. I don’t yet have a good feel of the epoxy:balloons ratio, though some research after the fact suggests it’s about 1:4-5. The punchline here is that a single pump of epoxy and hardener would have been plenty, with two pumps the mixing cup was getting pretty full after a while. That may be why I decided I had a good dry mixture when, in reality, it needed more balloons.

Once I started applying the stuff, after a bit I started to think maybe it was slightly too wet, but it didn’t seem too bad. The main problem I ran into while working on the stab tip – where I started – was that the stuff really wanted to stick to the popsicle stick I was using, which made it hard to put the stuff where I wanted it. That may have been a poor choice of tool, in retrospect. Once I got the stab tip done, I stuck it in the vise with the open end up while I moved on to the rudder bottom. This was even more fun, trying to put a thin layer of micro on the light face, and then wrap it around the edges. Once again, the way the stuff was sticking to the stick made this pretty tough.

I was still thinking I was doing decent until I finished that and took a look at the stab tip. I hadn’t clamped it precisely straight up, and the micro had overflowed the downhill side. That was when I really realized I made the stuff too wet. I ended up creating a sort of dam around the open end of the tip with tape and plastic, then re-clamping it more perfectly vertical, so I hope that will end up mostly OK. The rudder bottom, on the other hand, I don’t really know of a way to control the flow there, so I’m probably going to end up with something disgusting here when it’s all said and done: 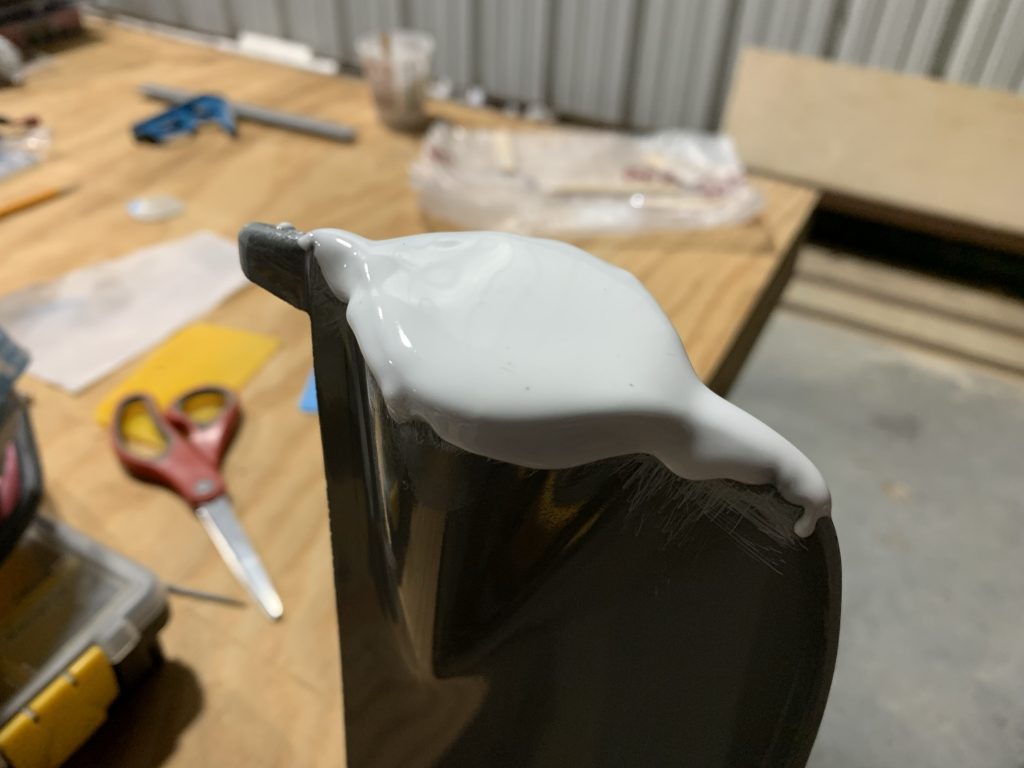 The other dumb thing I did was working on this in the evening during a cold snap. When I went to look up info on dry micro consistency, I also noticed warnings about the epoxy not curing right in low temperatures – and it was down in the 40s by the time I finished up. I set up my heat lamp on these two pieces, which will hopefully help, but who knows whether any of this work will be salvageable. Only time will tell.