OK, so when we left off, I’d just figured out that the poor fit on the rudder tip was an issue with the counterweight skin shape, not the tip piece itself. So the first order of business was to see about straightening that up. After trying a few more gentle techniques, I decided that I just needed to break out the hand seamers. I suspect that the root of the problem here is that I didn’t square up the flanges on the tip rib way back in 2012 or whatever, which meant that to fix this I needed to target the bend in that area. But a little trial-and-error with the hand seamers got things nice and square, and with that done, the tip piece fit quite nicely.

However, this led to a new problem, regarding clearance between the counterweight area and the vertical stab. Previously, these two pieces were nice and parallel with an even gap between them, but by straightening the upper part of the counterweight, I also caused the leading edge to move downward. Not far enough to actually catch on the stab, but it did result in an unsightly uneven gap, and I still wanted to keep proper clearance here (by which I mean “they’re not touching” wasn’t satisfactory to me). I first addressed this by undoing a bit of my bending, a little at a time, until the gap to the tip when installed started to open up just a bit. Things still weren’t completely parallel, so I removed the rudder and adjusted the rod end bearings. Turning the bottom one in a full turn, and the top one out a full turn, got things looking quite nice.

But at this point I realized I should also be thinking about the rudder base fairing. Just eyeballing things, it seemed like there was an opportunity here for the fairing to interfere with the stab spar head of it…so it was time to switch gears to that piece. This one is a little more fun to fit, because it needs to be notched on each side to allow for the control horns. There aren’t any layout markings or anything provided for this, you’ve just got to figure it out on your own. What makes this even more fun is that the notch isn’t 90° to the upper surface of the fairing.

After thinking this over for some time, I decided to measure things out, using the trailing edge as a reference point. To start with, I identified the distance from the trailing edge to the forward face of the control horn angle, and marked that on each side of the fairing for a starting point. Then I used the width of the lower horn angle to figure out the distance to the other side of the notch, and marked that point on the upper edge. To draw the angled lines, I laid a popsicle stick inside the angle, and used a ruler to draw a line along the bottom of the rudder skin. This gave me a handy sort of angle finder – I just had to align that pencil line with the top of the fairing, then drawing a line along the side of the stick would give me a proper cut line. Then I just had to work out the depth of the angle, and I finally had a starting point for the cutout: 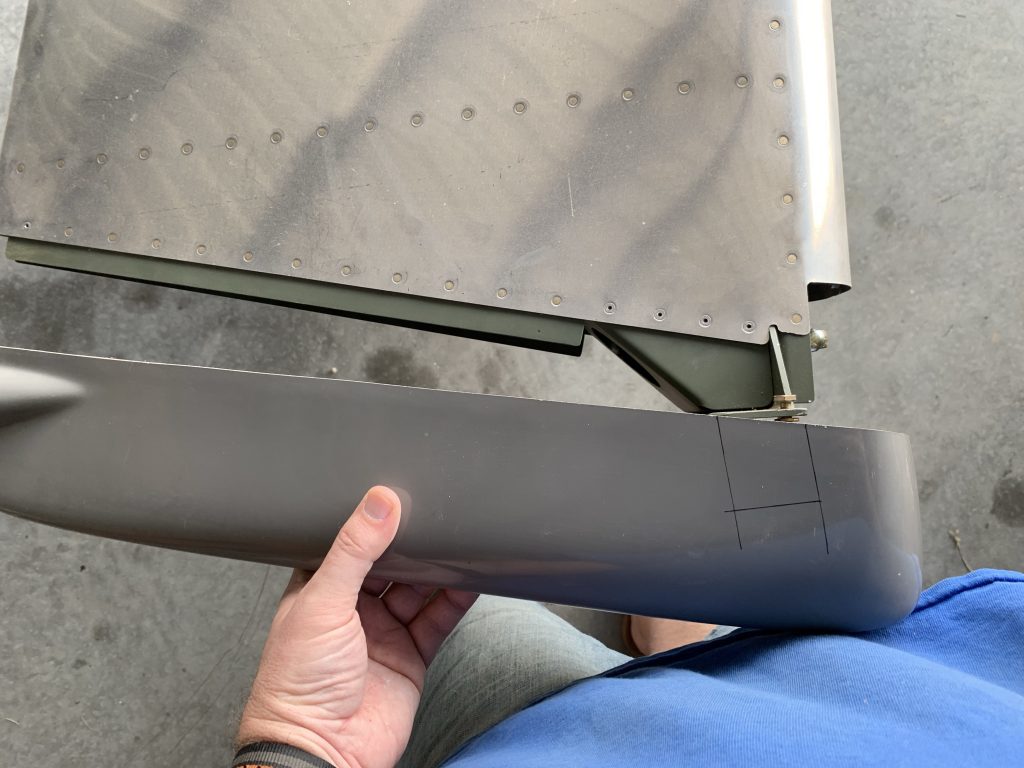 Of course, this wasn’t exactly super precise, and I was conservative with the layout as well, so after making the initial cuts I spent a lot of time carefully expanding the cutout, with repeated trial fitting. I made another sort of fiberglass file with some 40 grit sandpaper glued to a popsicle stick, and really put that thing to work. It took probably three or four iterations on the cutouts before I was even able to get the fairing partially installed. A couple more iterations, and it finally slid into place: 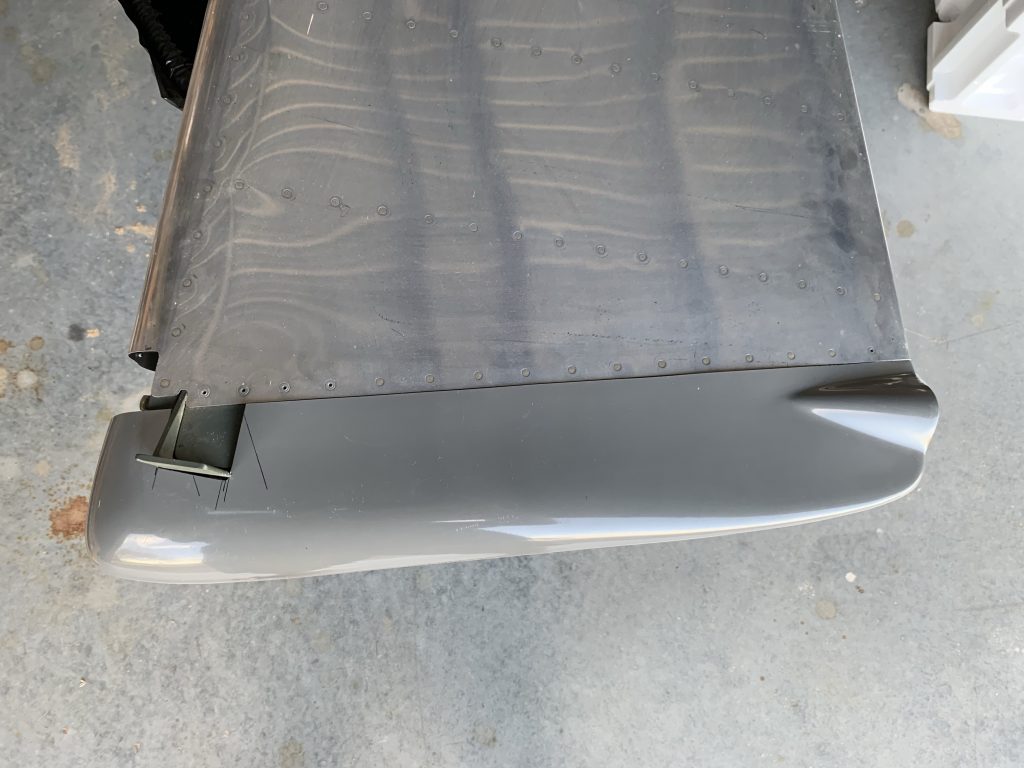 I still wasn’t done, though. The cutout didn’t quite match the horn, and I wanted a nice even gap all around, not like this: 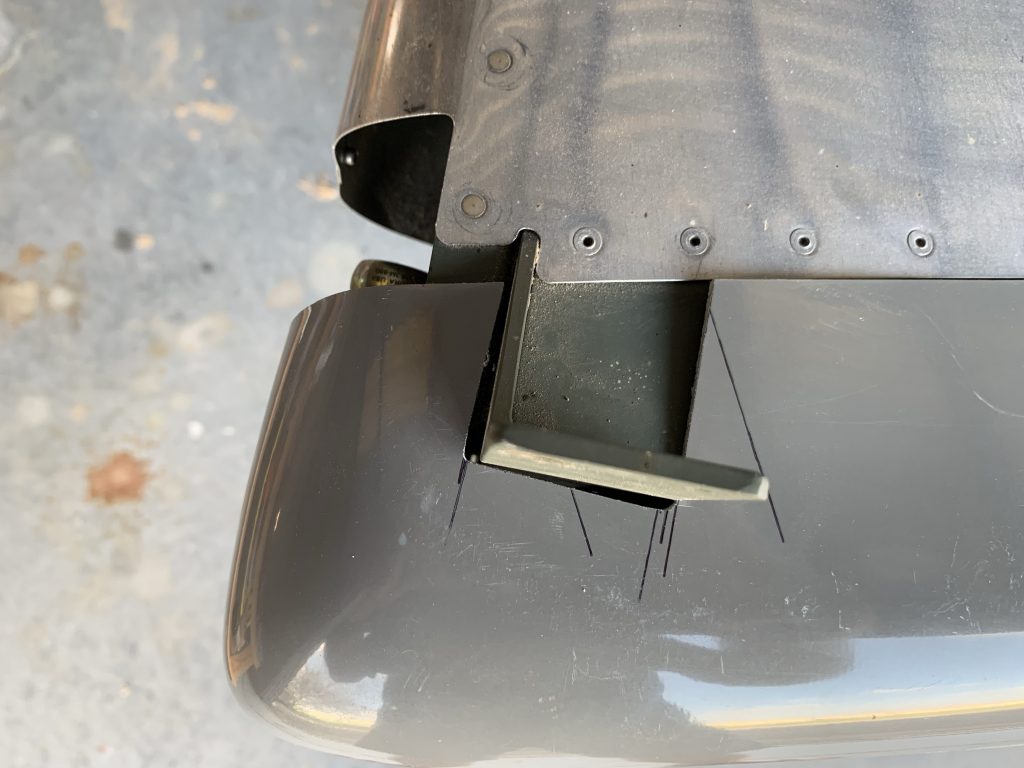 So I marked new cut lines using the horn as a guide, and did even more sanding and such, until I had a nice 1/8” gap all around. I was feeling pretty good about this, and had even started beginning to layout the attach holes, when something (I really don’t remember what) got me to go look up other folks’ work on this. Whatever I was looking for, I found an entirely different concern: seems some folks have issues with the fairing interfering with the tailspring. Additionally, it seems that some trimming might be in order on the leading edge of the fairing. So before I did anything else, I went and tried installing the rudder yet again.

Immediately, the first issue presented itself: the rudder couldn’t possibly go on the way things were now, because the fairing would interfere with the rudder stop attach bolts, as well as the adel clamp I added for routing the tail light wire. In this photo, the rudder needs to go about another inch forward (note that the rod end isn’t even into the hinge points at all): 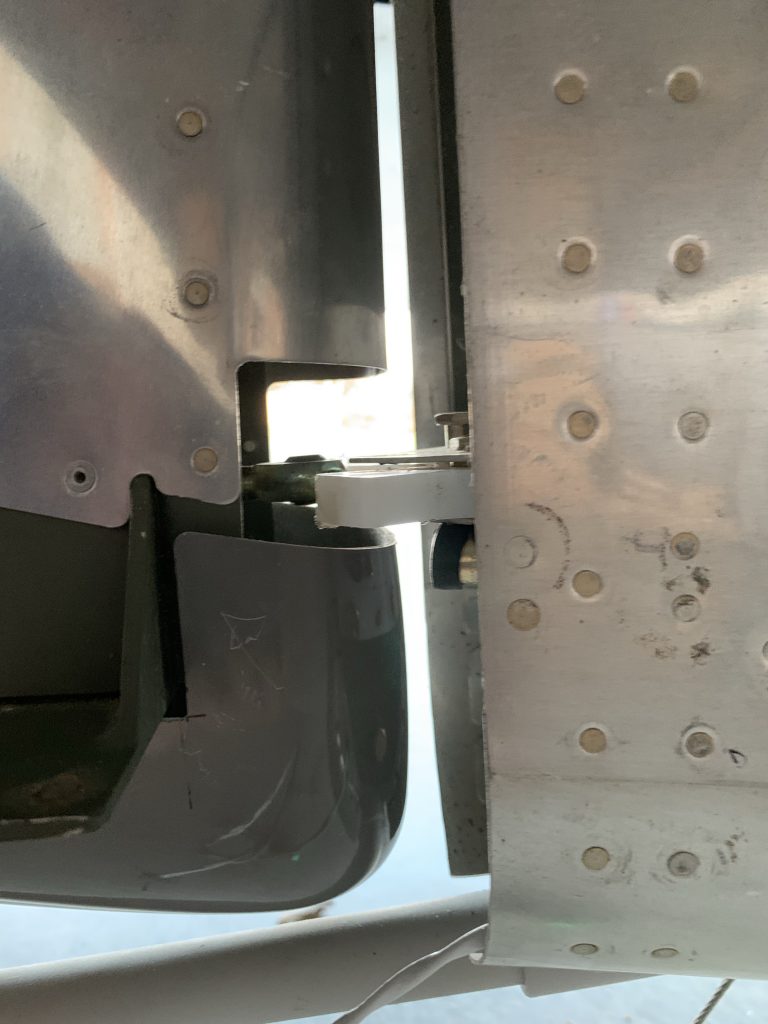 I needed to solve that problem before I could even see about the tailspring interference. Rather than trying to carefully figure how little to trim off here (read: going through another series of iterations, except this time refitting the rudder repeatedly), I decided to just take the cut along the bottom of the horn forward to the tip. Sadly, this meant that one whole side of each cutout, which I’d painstakingly fit, was going away. Oh well.

For this, I just used a strip of paper to carry the lower cut line around the forward edge, did the rough cut, and then once again did lots of sanding, this time with a long flat block, until the top of the cut was nice and planar. Well, mostly, as seen in the next photo, it still looks like there’s a little upward turn at the front. I’ll have to go clean that up some more, you know, just in case someone gets on the ground and looks across the rudder at just the right angle: 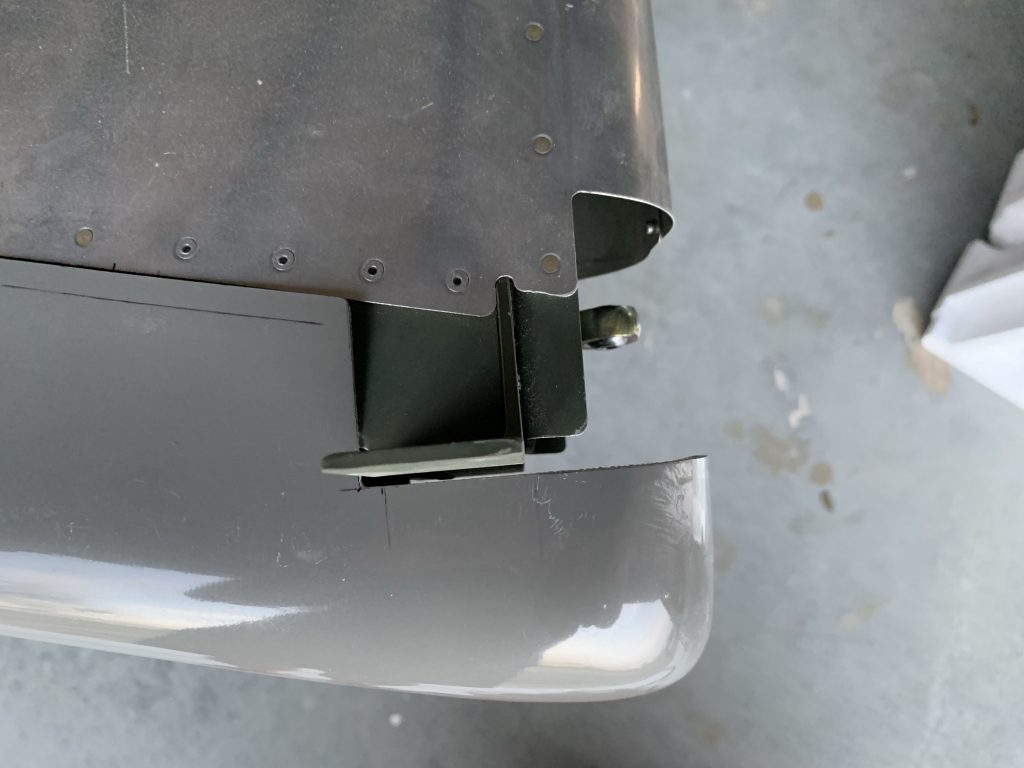 Finally, it was time to install the rudder yet again. Clearance up front with the adel clamp was of course not an issue any more, and the fairing still clears the spar just fine through the entire range of rudder motion. Even better, there’s not interference with the tail spring after all. It’s pretty close – maybe 1/4” if that – but given the location, I think this is probably fine. There shouldn’t be much deflection in the spring this close to the socket – but I suppose I’ll still ask around with the VAF crew to be sure. 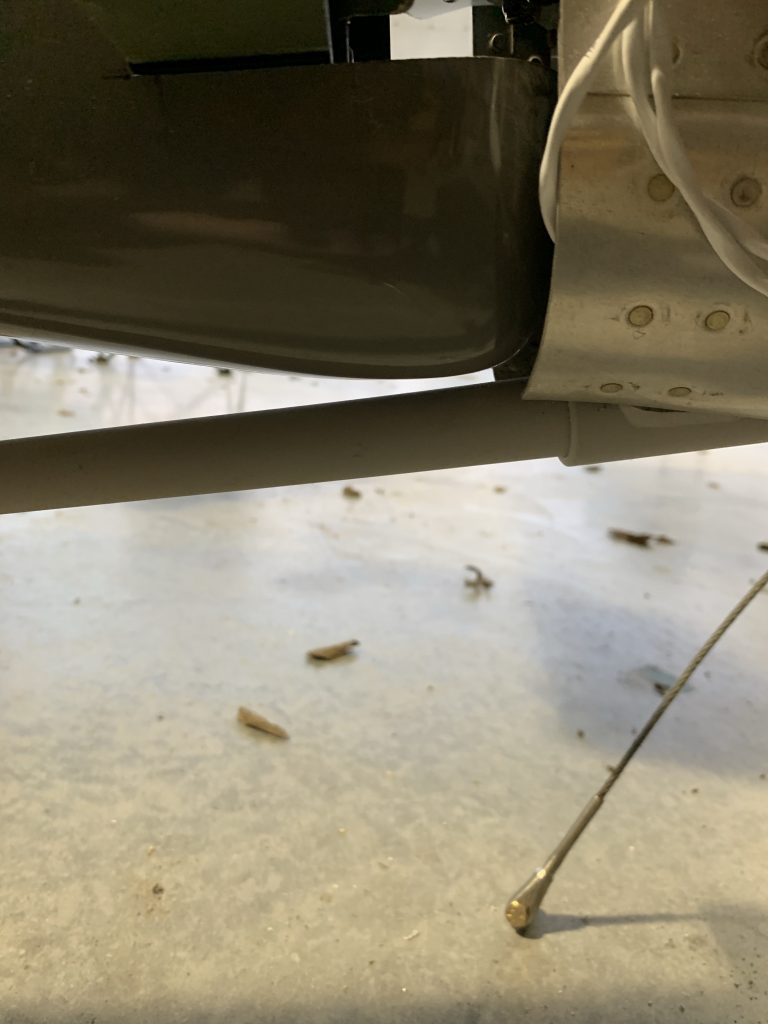 Assuming that’s OK, the next thing I need to decide is whether I want to attach this fairing with pop rivets (as per the plans) or with screws. Going with screws might make it easier for servicing the tail light wiring down the road – for example, when the rudder gets pulled for painting. I think it could be just fine with pop rivets – the service method could be to pull the tail light, disconnect the wiring, and then pull the wire from the fuselage forward through the fairing. I’d just have to make sure that whatever anti-chafe I have up front (probably I’ll add a bulkhead with a snap bushing) has a large enough hole to accommodate the plug. Reinstalling would require fishing the wire back through the fairing, which might be annoying but probably not horribly so. But if I go with screws, then the fairing would just be removed and dealing with removing/rerouting the wires would be a lot easier.

At the moment I’m leaning towards pop rivets for simplicity’s sake, but I figure I’ll let that marinate a bit before I make a decision. I might try and fish the wire through the fairing as it sits now just to get an idea how annoying it’d be…though it occurs to me that without the taillight cutout being there, it’d be hard to get a real idea. Maybe I just figured out the next thing I’ll be doing…