So I continue to be sort of hung up on the horizontal tips, specifically figuring out how I want to modify them to not need so much stretching force to fit. For that reason, I decided to switch gears today and work on the vertical stab and rudder instead, figuring that maybe I’d have better luck there, and develop a bit more confidence in messing with this stuff.

The vertical stab tip was pretty straightforward – it still needed a bit of stretching, but nowhere near the level of the horizontal. I got it to fit nicely just by installing cleco clamps in the open aft end, and went ahead and match-drilled the prepunched holes into the tip. After cleaning those up to ensure a tight fit, I marked a trim line on the aft end of the tip and did the trimming.

Next, I installed the rudder and started trying to get that tip in place. This tip actually wouldn’t slip into place as provided; it was too long and so I did a fair bit of sanding down the flange to get it to fit. I ended up removing a fair amount of material at the trailing edge before it finally went in, and I’ll need to work on the exposed portion before I’m done to get it to match the rudder itself, but that’ll be a job for later.

What I really wanted to get a look at by slipping it into place was how it matched up with the vertical stab tip, and sure enough, they’re pretty far off. If I slide the rudder tip all the way in place, its forward end sits about 1/4” lower than the stab tip: 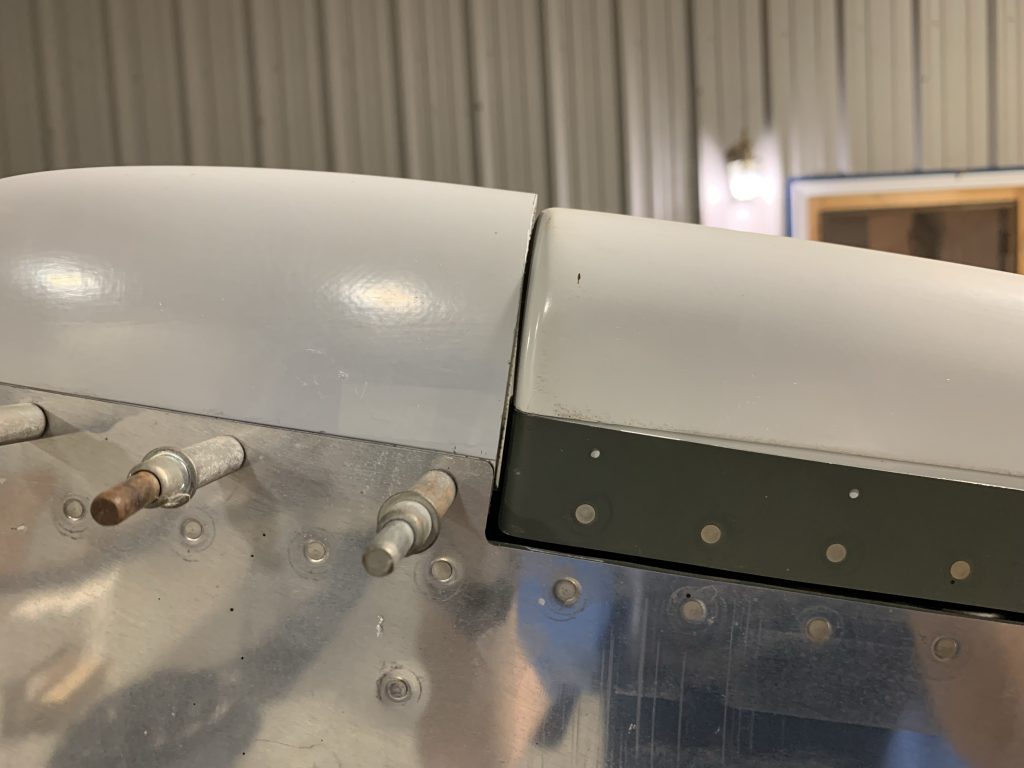 One possible way to address this would be to not insert it all the way, taking care of the alignment issue when the mount holes got drilled. The problem with doing this is that the flange now doesn’t cover the mount holes, as seen here: 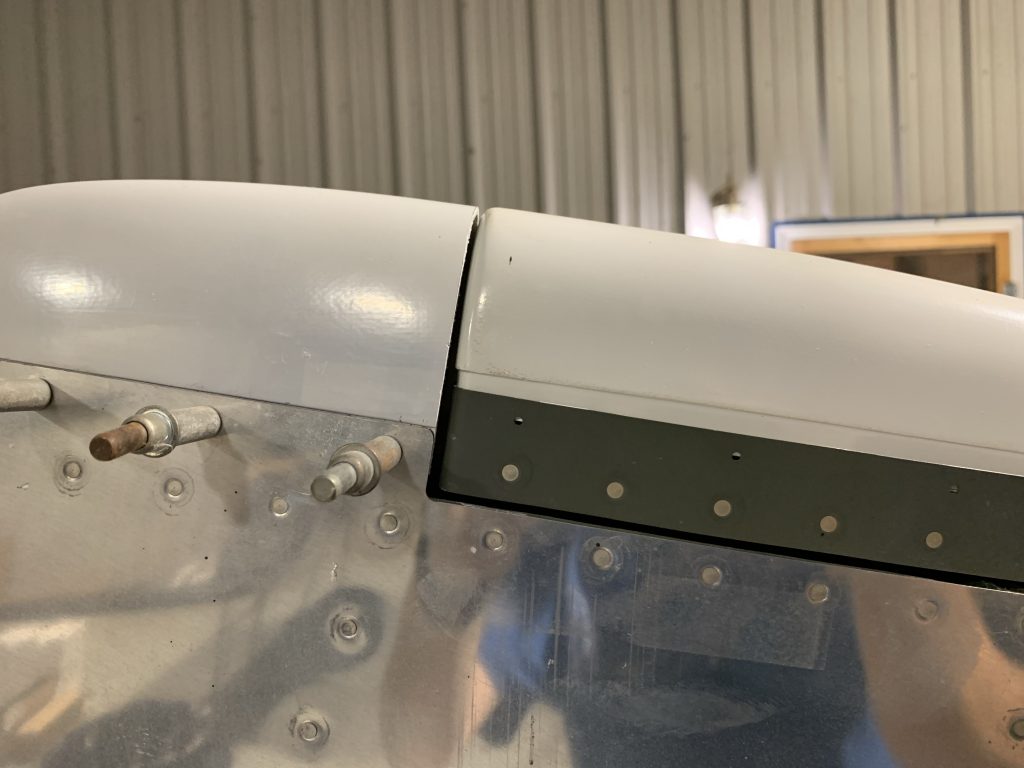 So basically, I had a choice between adding micro filler to the outside of the tip and sanding it to match the stab tip, or needing to scarf in a new layup to lengthen the flange and then fill in the old flag area to match the rudder skin. It didn’t take a lot of thinking to decide that the former was the better direction to go in. With that decision made, I went ahead and match-drilled the holes here as well.

The other issue I had here was that in the middle area of the rudder tip, there was a fair amount of room between it and the rudder counterweight skin. I was hoping that the clecos would pull it flush, but they didn’t; I’ve still got a pretty unpleasant gap in that area: 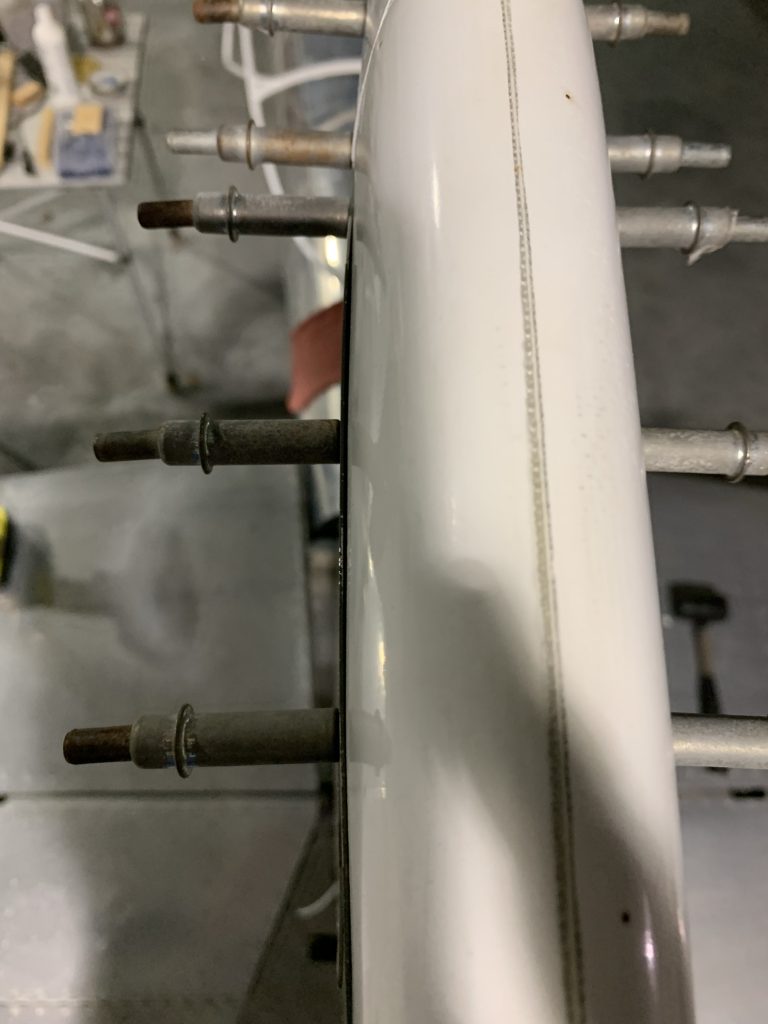 I tried doing the trick of adding a piece of popsicle stick to stretch the tip, but that still resulted in a poor fit. Eventually, I realized the problem – it’s not the tip, it’s the rudder itself. The counterweight skin isn’t straight like it should be; instead it sort of flares outward towards the open end where the tip should mount, which is why there’s so much of a gap there. I made some initial attempts to bend the skin for a better fit, but didn’t have a lot of success, and this is where I ended up calling it a night. I think what I’ll end up doing for tomorrow is making a bending tool out of scrap wood with a slot, and maybe I can use that to massage the skin to where it needs to be.