Well, I’m finally forcing myself to stop procrastinating on doing fiberglass stuff. The main hangup at the moment is that I’m working hilariously slowly as I navigate this whole new world of technique. Most of what I’ve spent time on has been sort of poking around and finding ways to do things. For example, one of the things I needed to do early on was some trimming of the provided fiberglass tips. But what to use to do the trimming? The bandsaw will cut fiberglass nicely, but it’s hard to use it on one side of a U-shaped fairing. The vibratory saw I bought a while back should be good for this, but which blade to use? Turns out a metal-cutting blade works well there, but a trick I learned along the way is to keep the edge of the blade at an oblique angle to the workpiece. Let it get perpendicular, and the teeth will grab the work and weird things will happen.

So that’s a big intro to the first trimming, which was on the elevator tips. I knew I’d need to cut out a section on the forward ends to accommodate the counterweights, but it also turned out that I needed to trim the flanges down. For whatever reason, these are far too long to not interfere with structure inside the elevator. At least making those long cuts got me pretty decent at working the oscillating saw. Some 40-grit sandpaper on a wood block worked well as a file to get the edges right where I wanted them. After making lots of dust, I had some tips that at least fit where they were supposed to go.

Here’s a look at the notch for the counterweight: 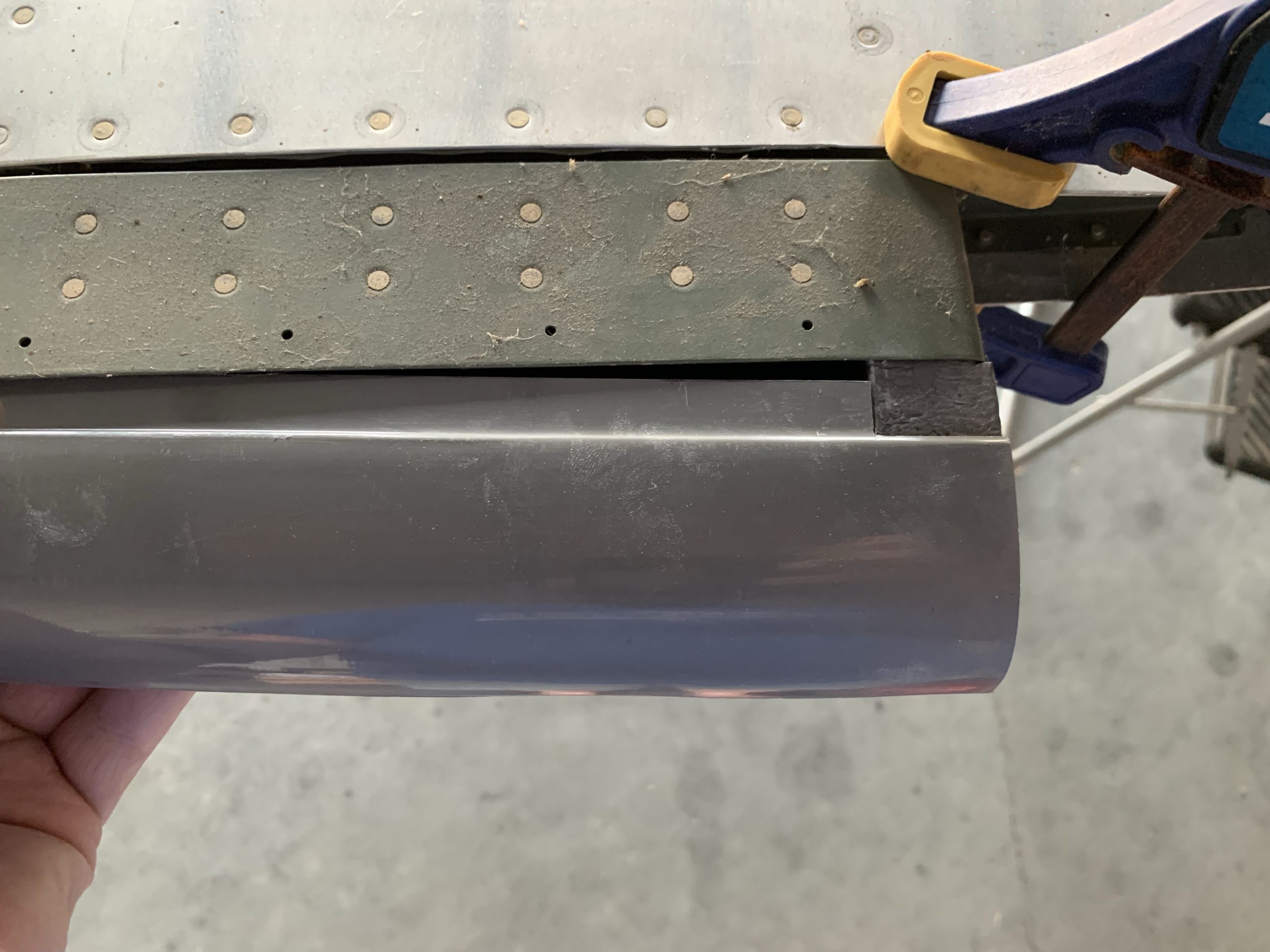 And one trimmed tip slipped into place: 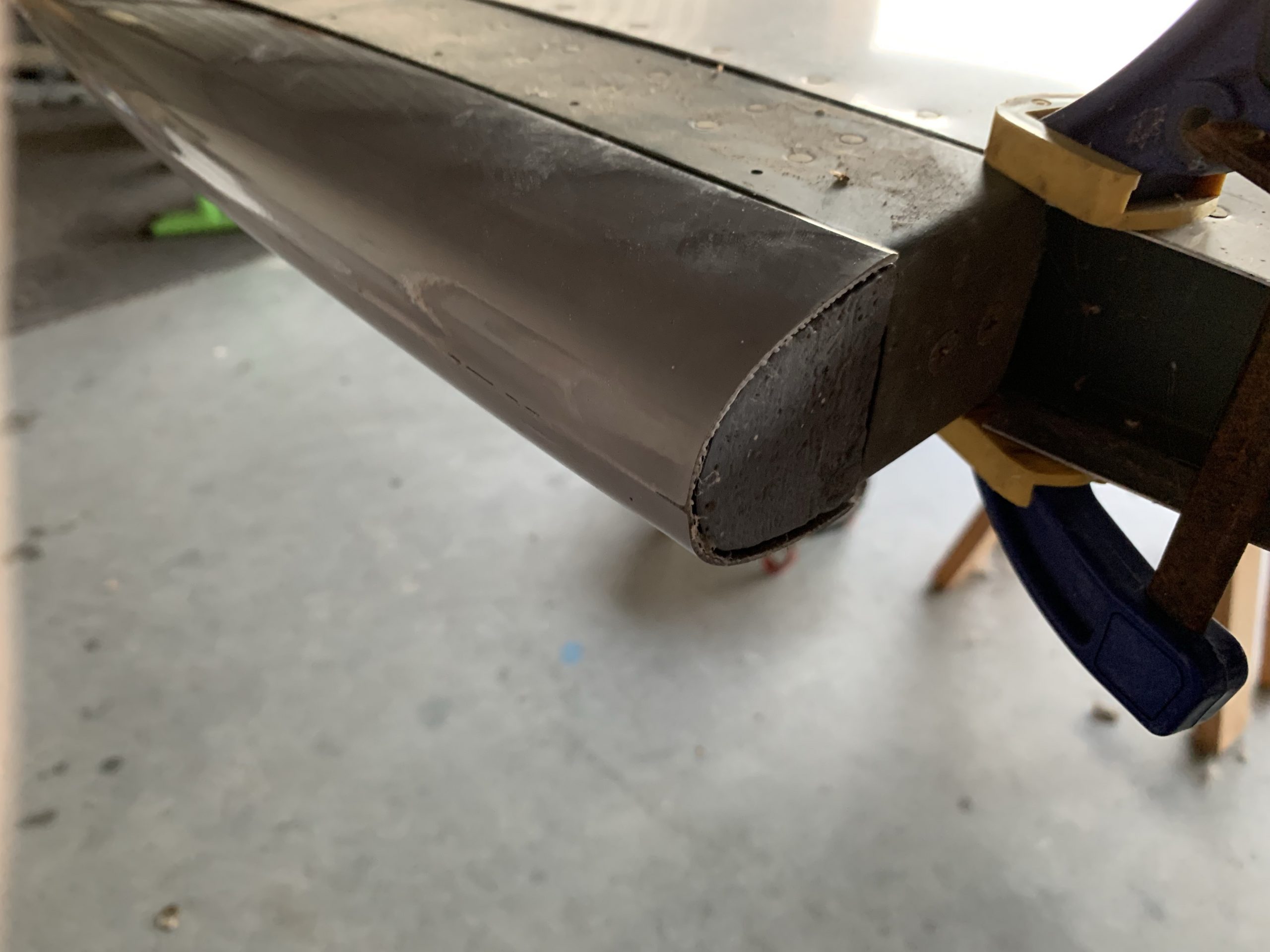 The next fun was figuring out what to do for that leading edge. As can be seen in the photo above, the elevator counterweight skin has a nice curved profile on the forward edge, but both the actual counterweight and the tip itself stick out beyond that. I’d like for this area to have a nice smooth profile, and I’d also like to have fiberglass enclosing the forward end of the counterweight, so I guess I need to trim off some lead. This is convenient, since I need to remove some material to get the elevators properly balanced. But to do that, I need to disconnect the control system so the elevators can swing free…but even when I did that, they’re bound together a bit by the center bearing bolt, and I want them to move independently. I couldn’t for the life of me get that center bearing bolt out, though. I guess I used special tools before, but now I’ve got the vertical stab in the way making the whole thing even more fun. I actually ended up punting on this for the day and moving on to other things…

The other consideration is the stab tips. I mentioned the fitment issues with these in a previous post, and today I worked some more at figuring a way to get them to fit decently. I tinkered with my wood block method from before, but never could get it to work like I wanted, so instead I decided to try putting some small spacers inside the tips to spread them as needed. A piece of popsicle stick, strategically cut, worked surprisingly well to get the tip to fit better, but I kind of don’t like how much force is required to spread the thing. I’m thinking I might want to remove some material on the leading edge of these pieces so they fit better without so much brute force, and then shore them up again once I work that out. I’m not entirely sure how I want to approach this, though…something else to research, I guess.

All in all it feels like I’m not making a lot of progress with this, which is making motivation a little hard. Hopefully I’ll soon get more comfortable with this work, and start to develop a little more flow.