Fitting the side rails and tweaking the canopy frame

So the goal for today was to get to the point of finalizing the placement of the side rails. Getting this done required doing some work with the frame itself to get the fit correct. The main goal was to get the sides of the frame to line up properly with the fuselage sides; this will ensure that the canopy skirt pieces fit nicely down the road when that time comes. The fit here is checked by cutting some thin strips of scrap aluminum, curling them a bit to match the curvature of the frame, and clamping them in place so their fit against the fuselage can be evaluated. With this done, we get a setup like this: 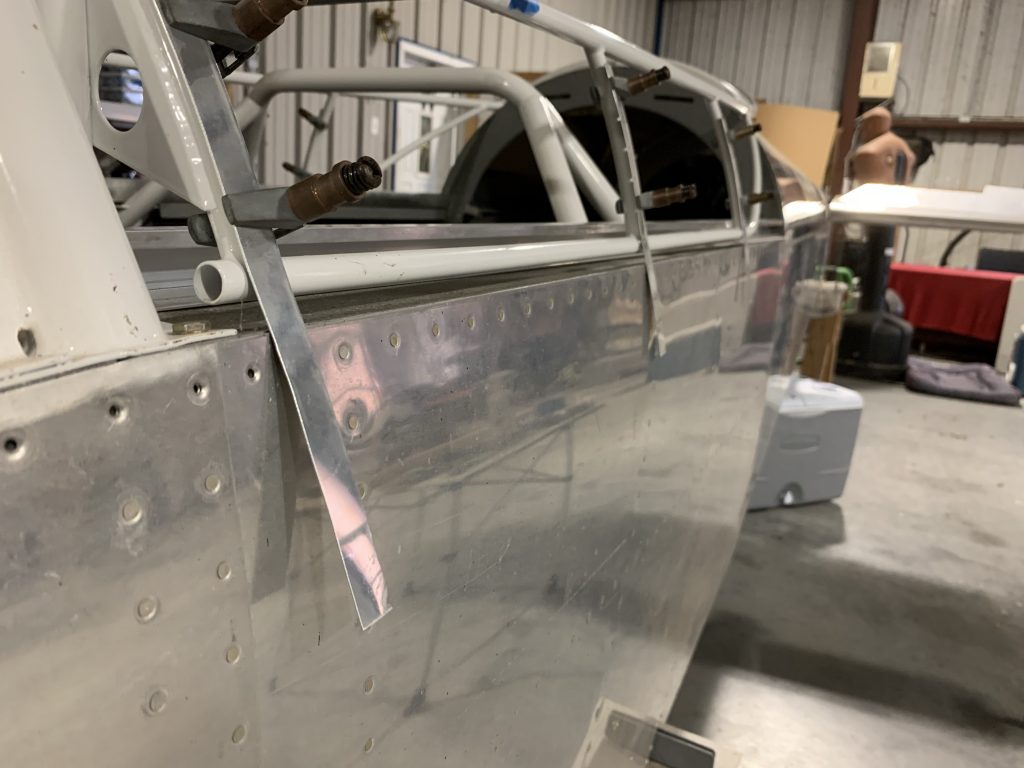 The previous photo was actually taken after frame tweaking, which is why the strips are fitting nicely against the fuselage. At first, though, the frame was a bit too wide, and the strips didn’t quite make contact with the fuselage, which meant I needed to squeeze things together a bit. The force for this was provided by a ratchet strap across the hoop at the front of the frame, but the other thing I needed was some way to reliably visualize how much I was bending the frame. This has more to do with the bending operation than the final dimensions of the frame, which can just be checked by re-checking the fit of the strips.

But for the bending portion, what I wanted to be able to do was to pull the frame to a certain point, relax and check the fit, and then pull it just a bit further on the next iteration. So I needed a good indicator for this purpose, and I went with a yardstick positioned across the top of the frame a little ways back, and clamped on only one side. To ensure precision, I put strips of masking tape on each frame and drew reference marks. The resulting setup: 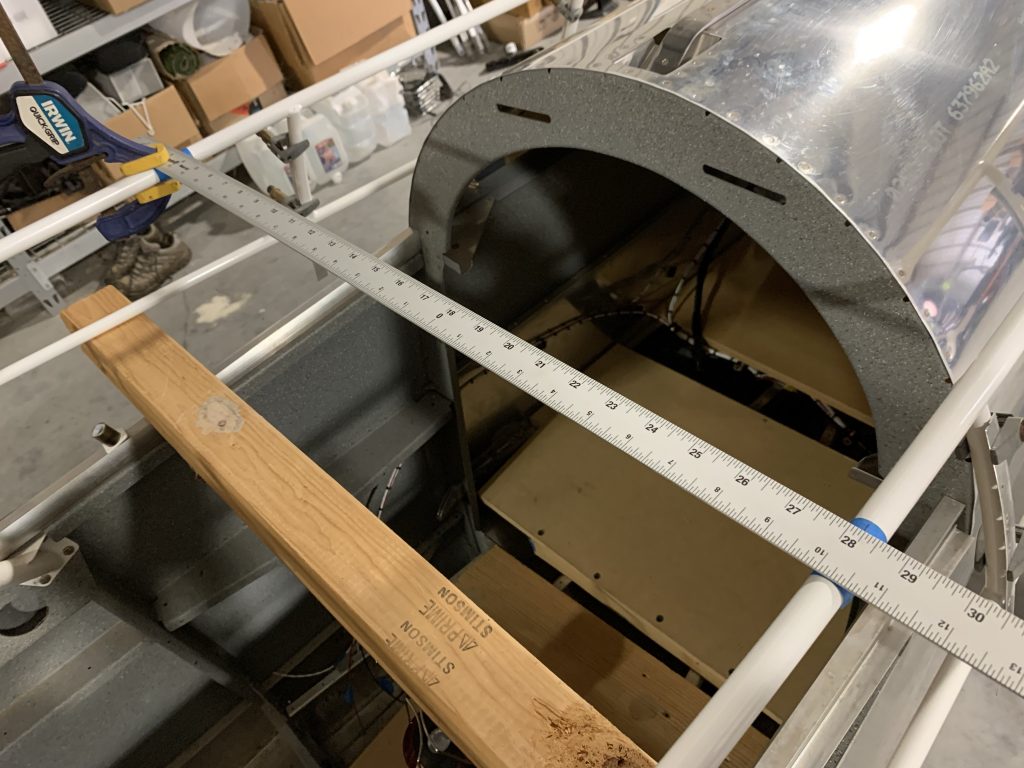 After several iterations, I had the fit I wanted, with the strips just barely making light contact with the fuselage sides. At this point, I started making preparations for drilling the mount holes in the canopy rails. There are two prepunched holes towards the aft end of the rails, which get drilled from below, but the other four holes get laid out on the rail itself and drilled from above.

This was a spot where my level of trust in the plans was a bit on the low side. Not that I thought they were wrong, but more that it wasn’t quite clear where the reference point for measuring was, and it seemed a good idea to really understand where the rail mount holes would end up on the fuselage. The longitudinal measurements are made from the front of the rail – but my question was, did this refer to the very front of the rail, or the relief cutout I made to fit around the roll bar base?

The first hole was to be set 2 1/16” back; measuring from the back of the roll bar base put this hole just behind the joint between the aft spar carry through bulkhead and the canopy rail mount on the fuselage, which seemed like the right idea. But continuing to measure backwards, the third and fourth holes clearly needed to be positioned around the seat back support bracket – and starting with the roll bar base put the third hole obviously in conflict with that bracket, while the fourth one had lots of extra room.

This indicated to me that I should be measuring from the front of the rail instead; doing this moved all the holes forward by about 3/8”. Measuring this way, the third and fourth holes ended up nicely positioned around the seat back bracket, but now the first hole seemed to interfere with the carry through bulkhead joint. This seems wrong and baffled me for a good amount of time, but after evaluating the layout a bit more, I realized that the lateral position of the hole put it almost exactly between two of the attach rivets – which are spaced kinda far apart. OK, this was starting to seem a bit more reasonable.

Still, I was unsure, so before committing to anything, I went in and did some research – which yielded absolutely nothing. That is, no one saying “oh yeah this is how it works” but also not “oh no no no don’t do that.” That was enough for me to decide that the intent of the drawing was for this screw hole to go through the bulkhead flange.

So I drew the hole layouts on the bottom of the rails, intending to drill those pilot holes on the bench and then use them as a template later on. But before that, I laid each rail in place to recheck that the hole positions appeared rational. The only tweak I made from this fit-up was to adjust that first hole forward a bit, in order to have it land directly in line with the rivets in the bulkhead. To do this, I just laid a ruler along the rivet centerlines and under the rail, and drew a new mark to adjust my hole layout (the mark hasn’t yet been drawn here): 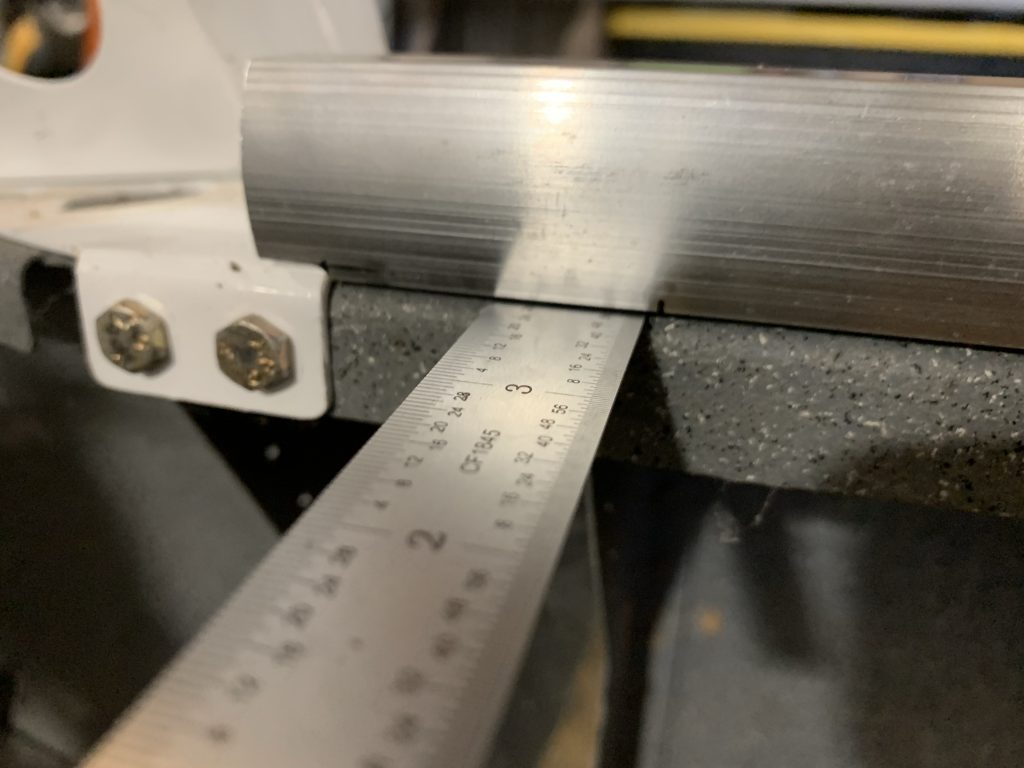 And so I finally got my mount pilot holes drilled in the rails…but then while reviewing he construction manual, I realized I wasn’t done tweaking the frame itself. The one adjustment left to be made was to get the proper vertical distance between the aft tip of the frame and the center slide rail. I figured this was unlikely to tweak the width of the forward end of the frame, but better safe than sorry. 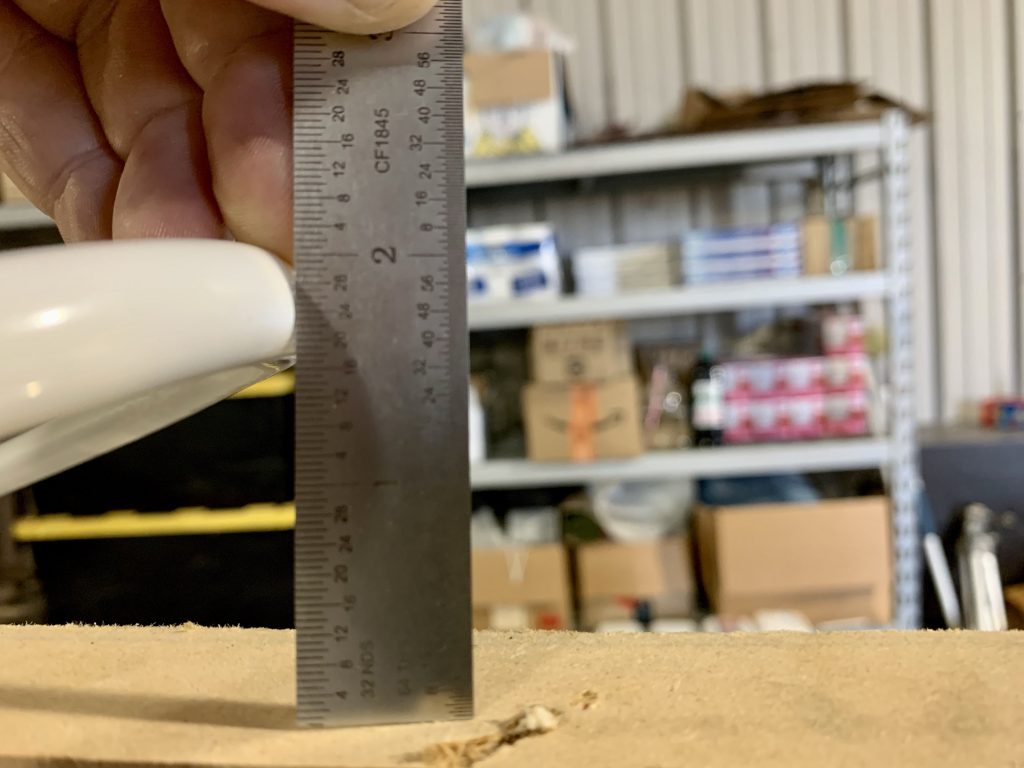 To do the actual bending, I screwed a piece of scrap lumber into the tabletop, using a couple of 3/4” spacers to create a nice gap in the middle, with the entire apparatus spaced a few inches shorter than the length of the back end of the frame. This allowed me to tuck the aft end under the lumber and simply push down on the forward end of the frame to get my bending done. I would have preferred something more controlled, like I did with spreading the forward end, but I couldn’t figure a way to really do this with controlled force. Instead I just sort of estimated where the frame was sitting relative to my body while bending.

Here’s a look at the bending “jig:” 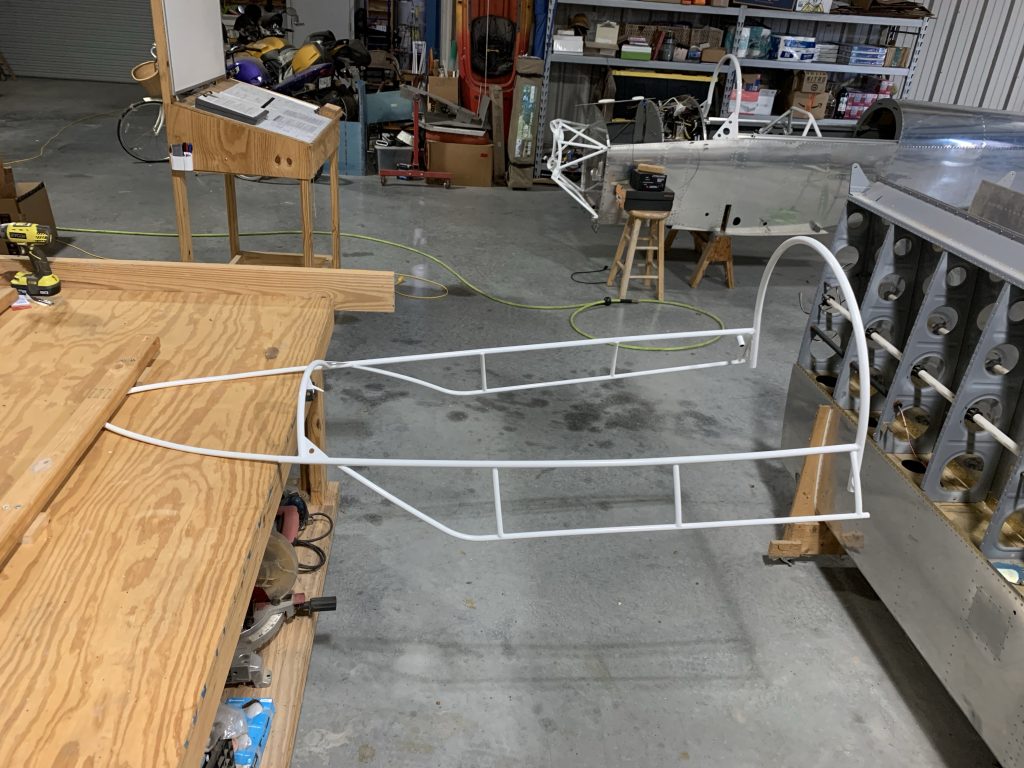 Also, rather than doing a lot of installing/removing the canopy to check the fit, I instead did measuring off the table for the rough bending. I already knew how much I needed the aft end to come down, so I set the frame on the table, measured the vertical distance from the table, and figured the new height I was going for. After a couple bending iterations, I was getting close and so I verified the fit on the fuselage before doing the final tweaking. It all ended up working quite well and now I’ve got a much nicer gap from the center rail: 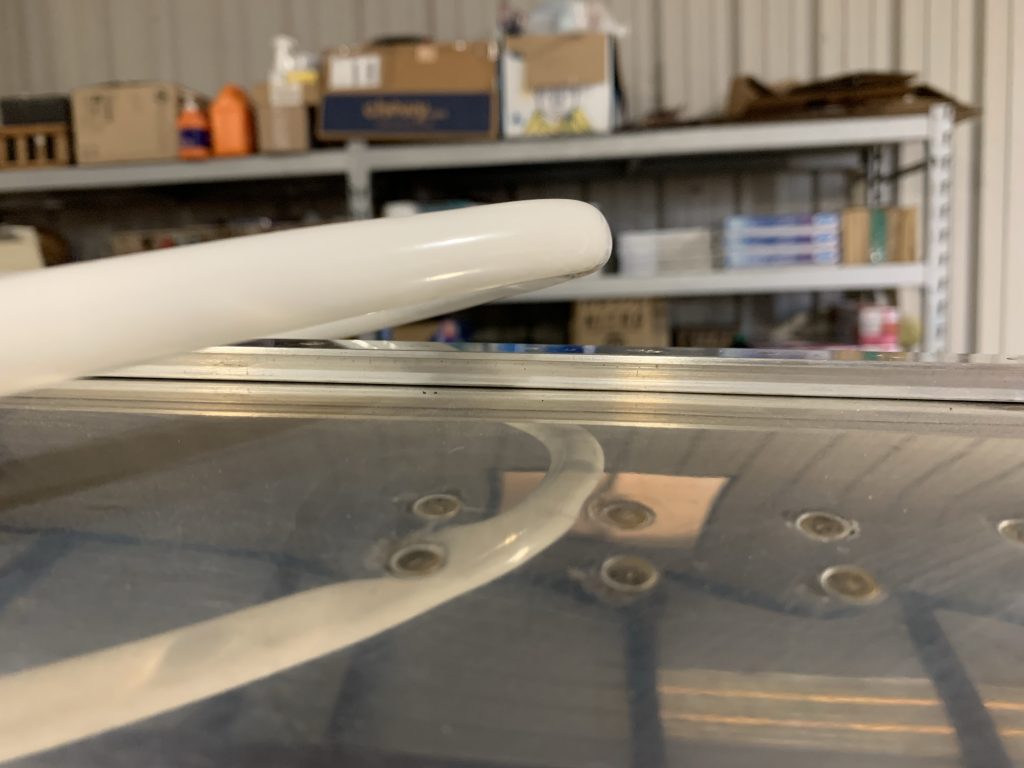 After a final double-check of the fit – as I’d figured, the front of the frame still fir just fine – it was finally time to clamp the rails in place and do some drilling. This is kind of fun because it’s a little hard to work out a clamping strategy. Notably, the manual says you can also tape the rails in place, but that just seems nowhere near accurate enough. I ended up with a C-clamp at the back of each rail, and another about 6” back from the front end.

To position the rails for clamping, I started with the frame nearly full-open – just far enough forward that I could still get the clamps installed (once in, m the clamps would block movement of the frame). I got the rails set an equal distance in from each side of the fuselage, and with the rollers roughly centered, and clamped the back ends. Then the frame went forward and I repeated this exercise up there.

As a final sanity check, I measured the distance across the rails at a couple different spots. This showed that the front ends were about 1/8” further apart than the backs, so I did a little more adjustment of the spacing. I really would have preferred to be able to run the canopy through the full range of motion with everything clamped in place, but that simply wasn’t possible. In the end I just had to measure multiple times and then just kind of go for it.

Drilling started by taking the existing #40 holes (the four I drilled in each rail, plus the two prepunched holes in the fuselage) and using them to drill into the mating piece. The holes laid out in each rail were easy; the other prepunched ones were a little more fun. Those required laying inside the fuselage in various uncomfortable positions while wielding an angle drill (for the forward pair) and a cordless with a 12” bit (for the rear pair, which sit really close to the bulkhead behind the rear seat).

It was only after drilling all these initial holes, adding clecos as I went, that I finally got to test the full motion of the frame. Whew…no binding. That was a bit nerve-wracking.

Next, I needed to create access holes for the rearmost hole in each rail. All the other screws sit outboard on the flange of the rail, and are easily accessible from above, but the rearmost is inside the rail, so a larger hole has to be drilled in the top of the rail so a screwdriver can pass through for installation. This hole also had the benefit of allowing me to do all the rest of the drilling from above.

With the access hole done, the rails got clecoed back in place and I enlarged each hole first to #30, then to the final size of #21. Then I got to pull it all apart and deburr the holes I’d just made. Remember those forward most holes whose placement I worried about so much? While they didn’t quite land exactly between the two rivets, they’re pretty close, and are nicely in line with the row itself: 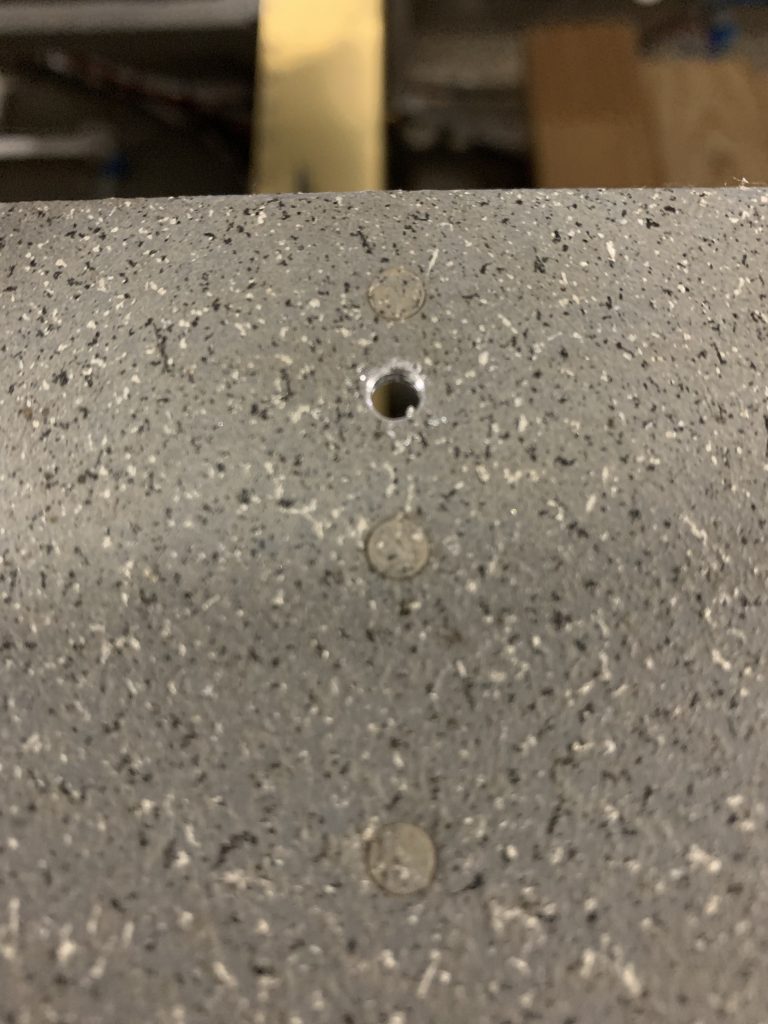 This was about the point where I was ready to call it a night. One thing I’d noticed earlier was that all the fitting had scraped up the powder coat on the roll bar base, so I wanted to touch those areas up before installing the side rails for good. So I hit those with the touch-up paint, and then as a last act took a look at those aft most screw holes in the rails. As mentioned before, the screw placement here is further inboard, inside the channel itself. A consequence of this is that the screw head actually interferes with a raised part of the channel, and I’ll have to relieve that a bit so the screw can actually sit flush.

The interference, along with my marks for making the relief, can be seen here: 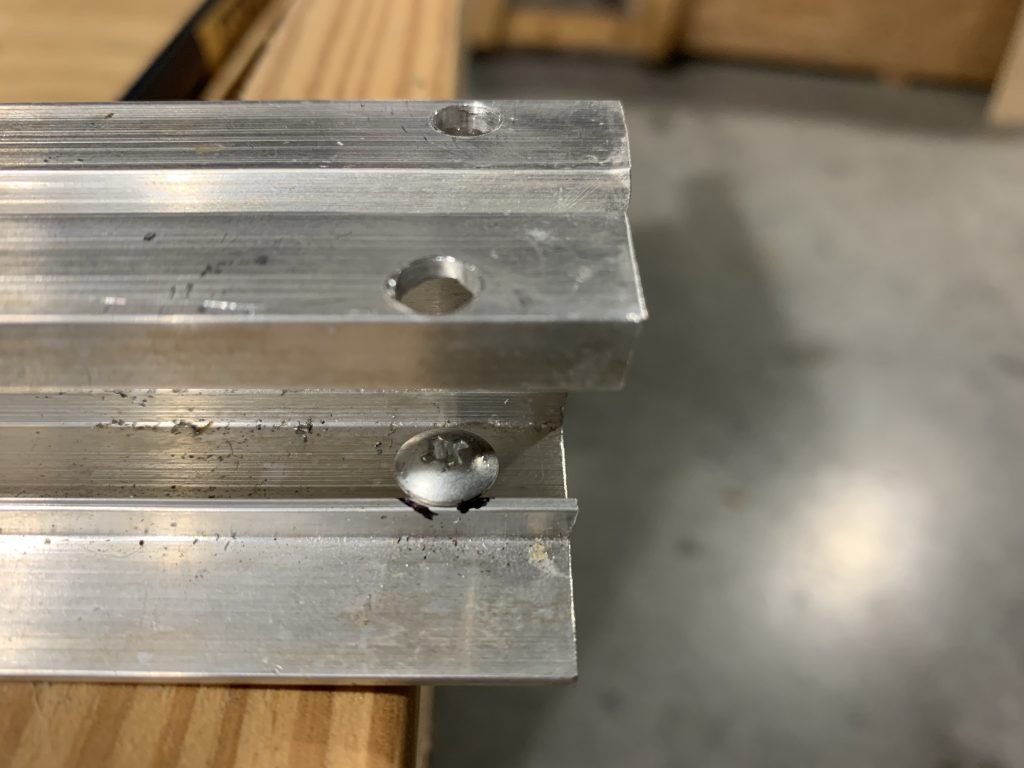 So that’ll be a good spot to pick up tomorrow (which I happen to have off). I’ll actually need to do one more trial fit, because I forgot one thing: the outboard part of the aft end of the rail actually sticks out past the fuselage sides, and will need to be trimmed. I should have marked that before removing the rails tonight, but I forgot. That’s OK, there were much worse mistakes I could have made.

Once the rails go on for good, there won’t be much left but to start messing with the actual canopy bubble…