Picking up where I left off yesterday, today I got to work finishing up those side rails. I clecoed the rails back on the fuselage so I could mark the trim at the aft end, then removed them again to get the trimming done. Nothing special here, I just roughed the cut on the bandsaw and then went to work with a file to finalize things. Making the relief cut for the aft screw heads was a bit more fun. At first I tried just filing the relief cuts, but quickly decided that would take about half of my remaining lifetime. Instead I did the rough cutting with the Dremel and a rotary file, then just used the hand files to finish up the shape of the cutouts.

Here, you can see the relief cuts, as well as the slight taper from the trimming: 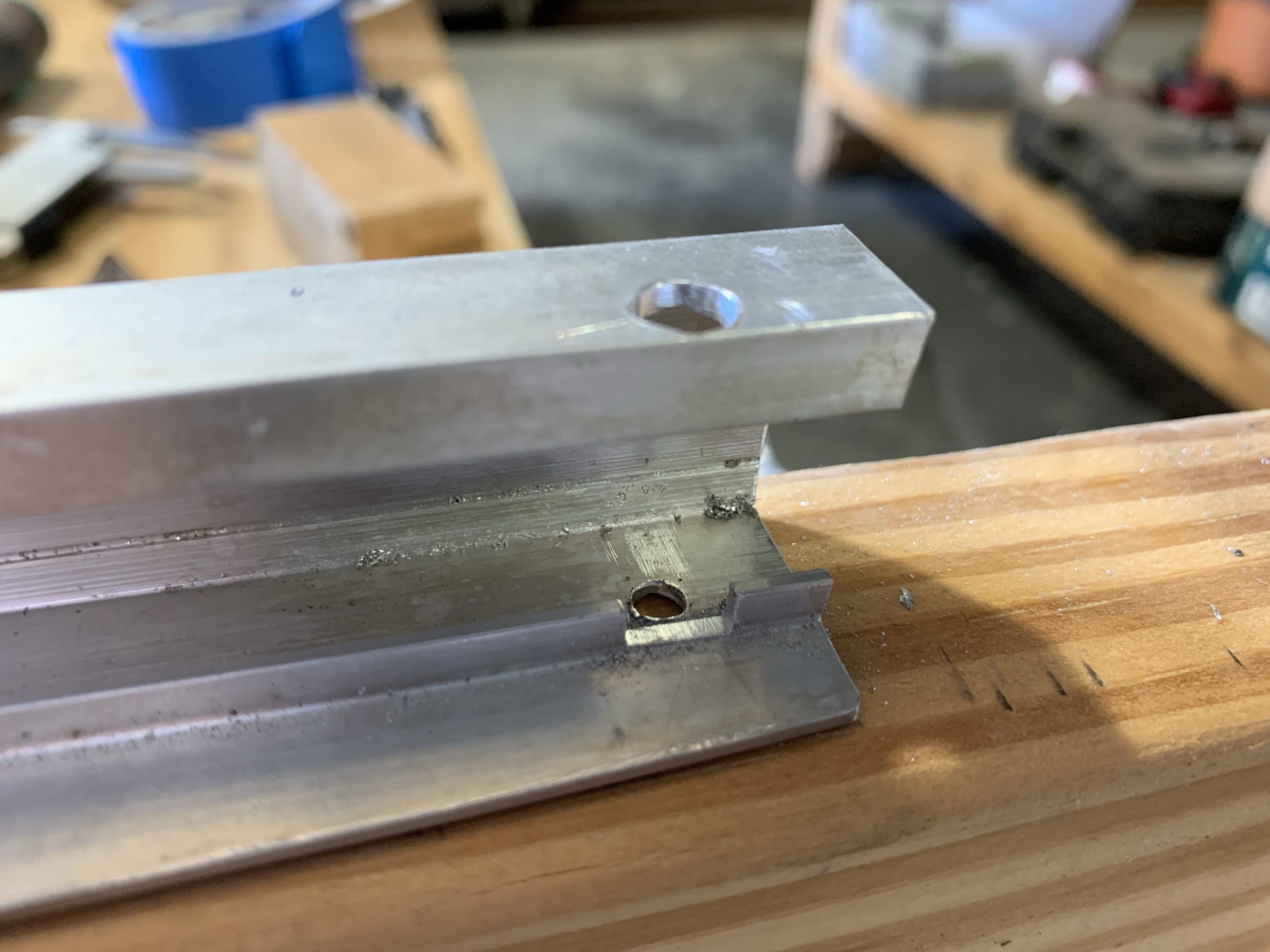 Then it was just a matter of getting the rails screwed in place on the fuselage. Next up was the anchor block back behind the rear seat; this was the only remaining component that wasn’t attached to the airplane yet. The anchor block just attaches with two screws through the back seat bulkhead. The location of the two holes is specified relative to the anchor block itself, but they actually get drilled through the bulkhead first, so a little math and thinking is required to get the layout right.

Next, the block needs some more work: on the forward side it needs to be countersunk to accommodate the dimples in the bulkhead, and on the aft side it needs to be counterbored for the attach nuts. Since the receptacle area is pretty right, the nuts get pressed into the counterbored holes and become captive nuts. The counterboring part was a bit interesting; I’d seen another builder mention that the specified 1/4” depth wasn’t enough, and I saw the same thing. Going 1/4” deep doesn’t even allow the screws to engage the nuts when inserted into the block, much less with the additional thickness of the bulkhead in play. So I went up to 1/2” instead.

The fun here is that the nuts need to be pressed beyond flush. Getting them started was pretty easy using my vice, and to press them further in I picked a small socket from my wrench set that fit nicely inside the hole. This worked great for one nut, but the other one turned sideways somehow, and I had to drive it out with a punch and start over again. On the retry, I pulled the nut into place using a longer #6 screw instead of using the vice; this ensured that it went in straight.

So here’s the back end of the finished anchor block, turned upside down mainly so it looks more like a funny face: 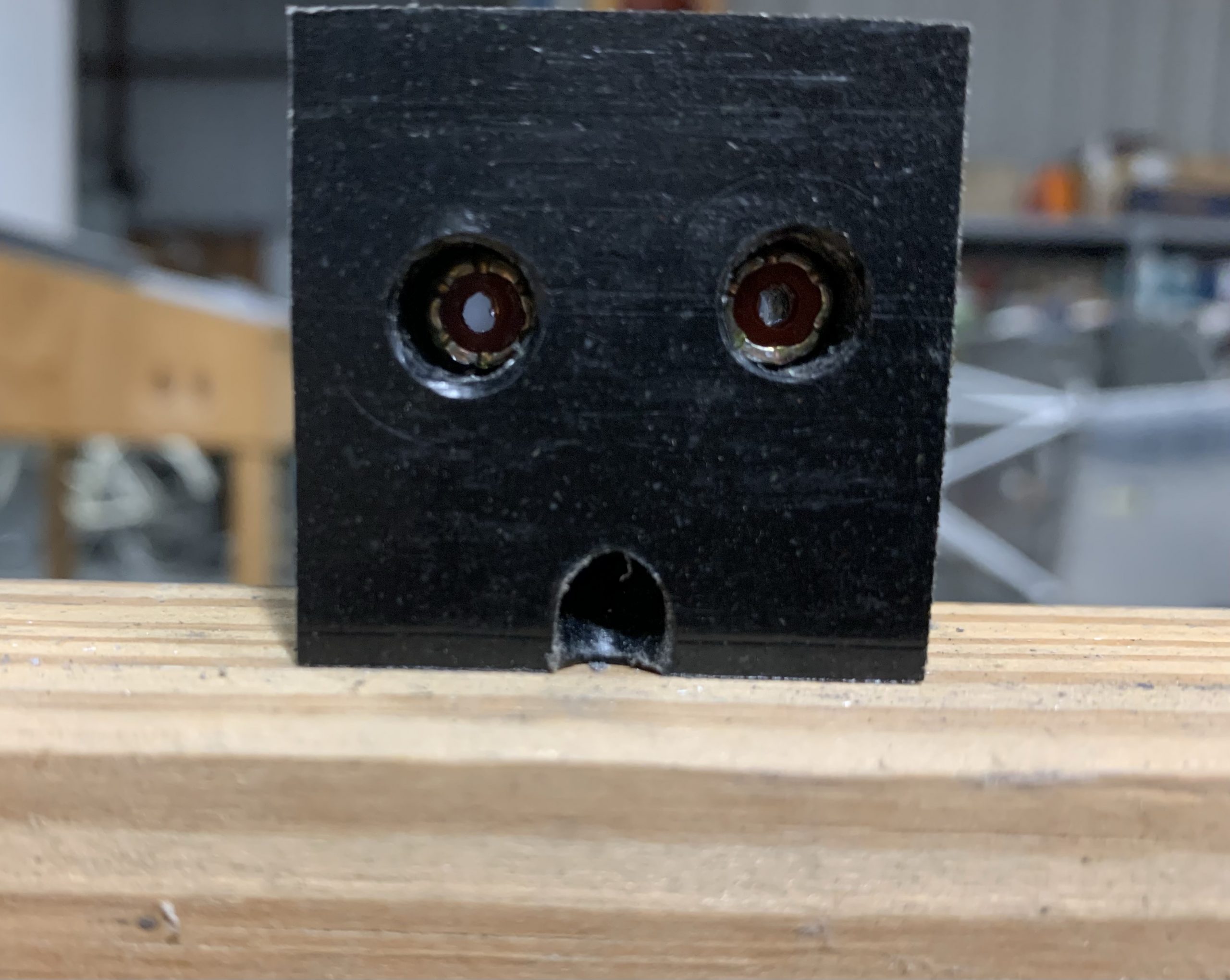 That just left dialing the bulkhead, which was definitely easier said than done. None of the squeezer yokes I had would work in the tight space, and I was kind of at a loss as to how to proceed. At one point I was really considering putting the dimple dies in place and trying to squeeze them between the jaws of a big pair of pliers, but fortunately I didn’t go through with that…I think I might well have damaged stuff that way.

Finally I came up with an idea. The problem here is mostly with figuring out how to handle the female dimple die inside the receptacle…but really I just needed something in there with the right shape. For example…the anchor block itself. With the countersinks made for the flush screws, I thought it might just do the job of the female die. So I dropped it back in place, closed the canopy frame to lock it in place, and installed one of the screws for good measure. Then I stuck the mail dimple die in the arbor of my C-frame, lined it up on the hole, and gave it a good couple whacks. The resulting dimple wasn’t perfect, but no worse than what I usually get out of pop rivet dimple dies (which would have been the other option here, and I would have had to buy a #6 set). A little work with the #6 countersink made everything all right, and then I repeated the job with the other hole, then finally installed both screws.

With that, I now have a fully functioning sliding canopy frame, with the exception of the latch, which will come later. And I now really have nothing else to do but to start working with the actual canopy bubble. To prepare for that fitting, I got out the forward upper skin and clecoed it in place again. I’ll likely have to remove some of these clecos to accommodate the actual bubble, but that I’ll just figure out on the fly.

In the meantime, I have an even more airplane-looking device sitting out in the hangar: 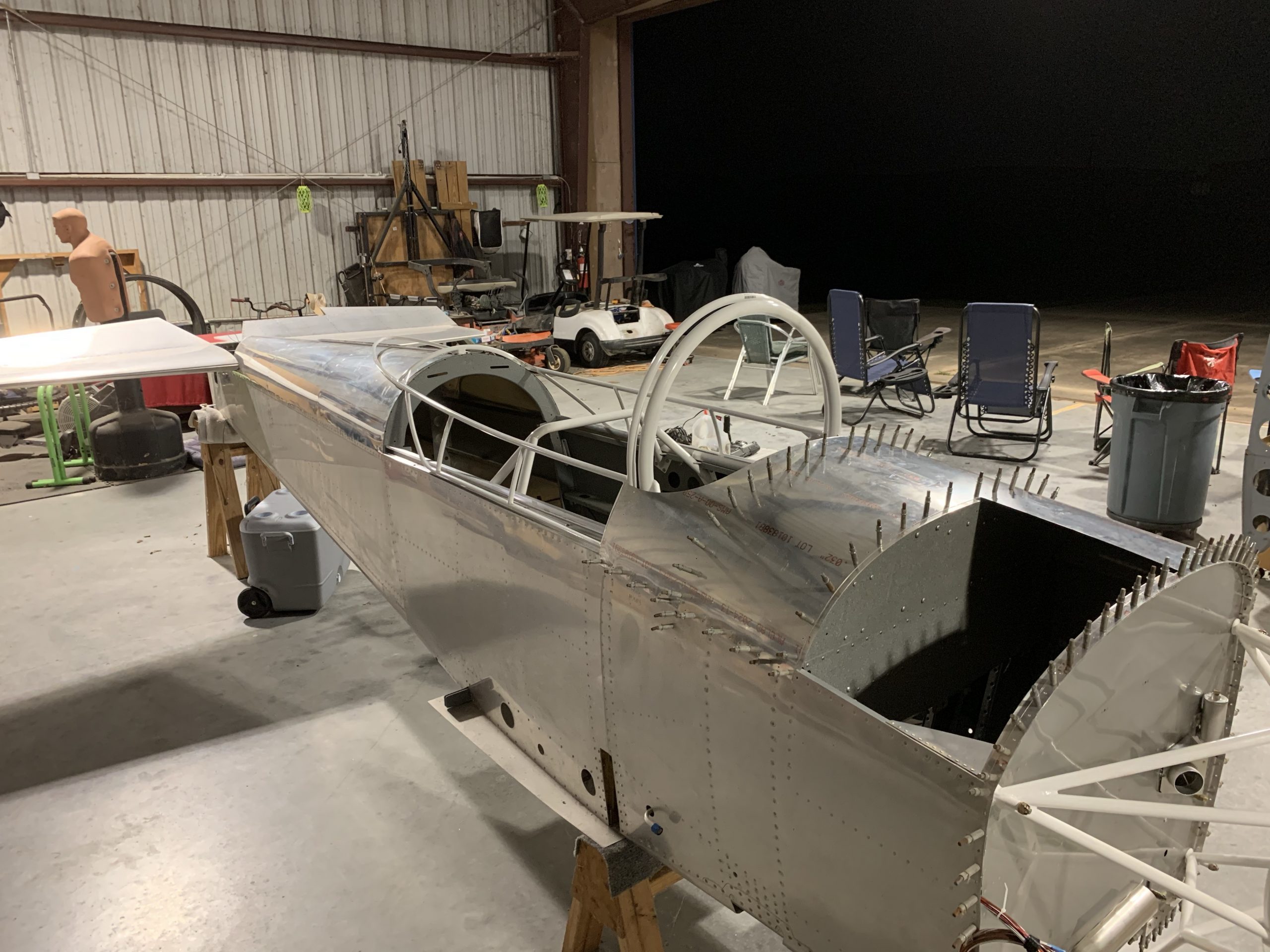