This past weekend I found a nice goody in the mailbox – a package from Van’t containing my replacement slide blocks. Yes, that’s “blocks” plural, because I ordered two of them, just in case I messed up a second time. Things have been busy since then but I got some time tonight to give this a second try.

Looking at the first block, I laid the holes out in what was a pretty good spot, but the actual holes ended up a bit lower. So for this attempt, I mostly focused in being more precise with the drilling, but also shifted the hole location up just a hair. As before, I used the center punch to spot the hole locations, but this time, instead of going straight to the drill press, I started the holes with a #40 drill bit I spun with my fingers. This way I could ensure things were starting off lined up. I also put together a spacer of scrap wood to put between the “ears” of the block to prevent the plastic from flexing while I was drilling; this was probably a big part of why the last block got mis-drilled.

From there, I opened the holes up gradually on the drill press; first a #40 bit using the holes I’d already started, then up to #30, and finally #12. That yielded a very snug fit with the pin, so I finished things off by running a #10 bit through both holes just using a hand drill; this gave be a better slip fit for the pin and also ensured both holes were collinear.

The first test fit on the canopy worked great; the anchor pin now sits just a bit above the center rail, and when the frame is slid all the way forward, the pin engages in the anchor block with the slide block fitting nicely between the frame and slide rail. With all that validated, there were some finishing touches to put on the block (or, as I thought about it, a few remaining opportunities to ruin the part).

First, one side of the block needs to be counterbore a bit to allow the clevis pin to sit flush. According to the plans this is required for the assembly to fit in the socket on the fuselage, though from my previous test-fit it worked just fine. But I’m not one to ignore instructions, so I used a 5/16” bit to make a nice little recess, so now the pin sits nice and flush.

The second thing that’s needed is a smaller hole from front to back on the block; this allows a cotter pin to be inserted through the end of the clevis pin and hold it in place. I was a little nervous about this since it required both precisely measuring the distance rom the block edge to the hole in the clevis pin, and also ensuring the hole was vertically aligned with the clevis pin hole. As before, I marked the spot and then started the hole by hand, before drilling all the way through with a #40 bit.

I think this is all that’s needed; there’s no real guidance given here other than “make a hole for the cotter pin.” I think the only thing that bothers me a bit is that the provided cotter pin doesn’t go all the way through the block, so it’s not really secured to my way of thinking. I’m somewhat inclined to look for some longer pins to use here, so they go all the way through the block and the ends can be bent out. Something else to think about…

For now, though, it’s done. Here’s a look at the clevis pin sitting flush, also showing the cotter pin head on the other side. I inserted the pin this way because with the canopy closed, gravity will be helping hold it in, for whatever that’s worth: 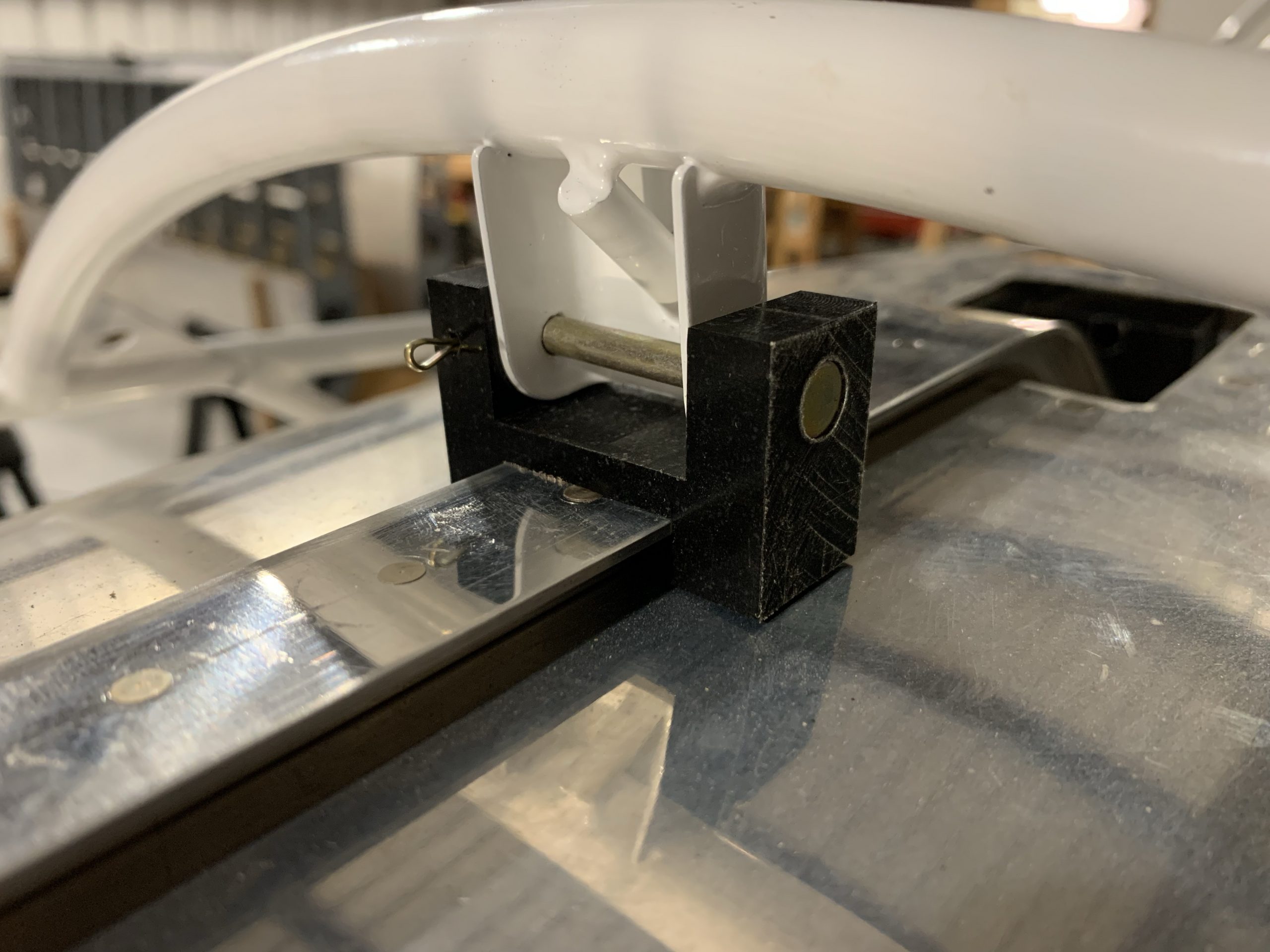 Here’s a better view of the cotter pin from the other side. Initially I’d thought of making the hole large enough for the head of the pin – or at least counterboring it like the clevis pin hole – but on second thought that’d make the pin really, really difficult to remove. Keeping the head exposed seems like a better choice to me: 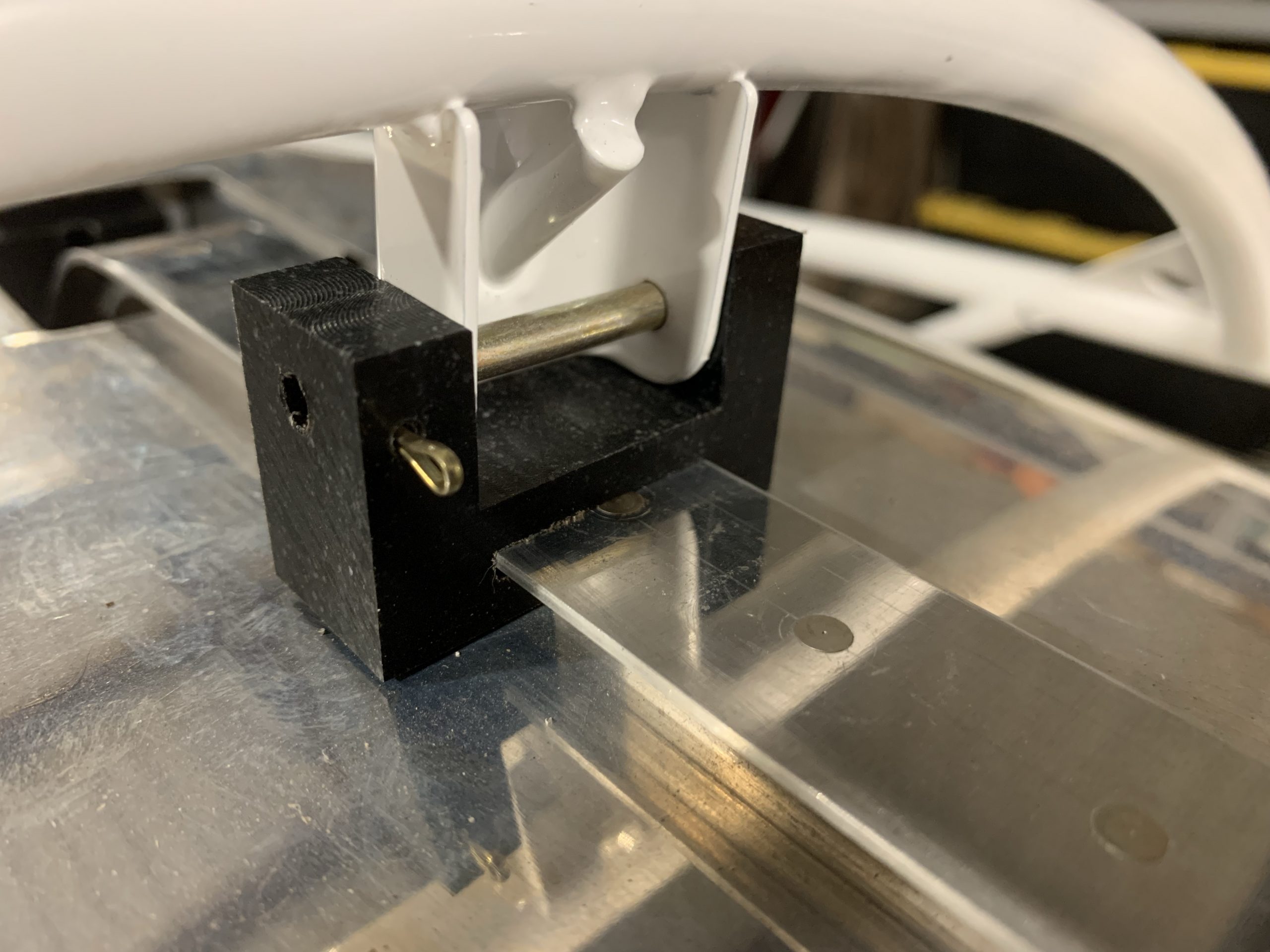 Finally, we can see everything mating together nicely with the frame all the way forward: 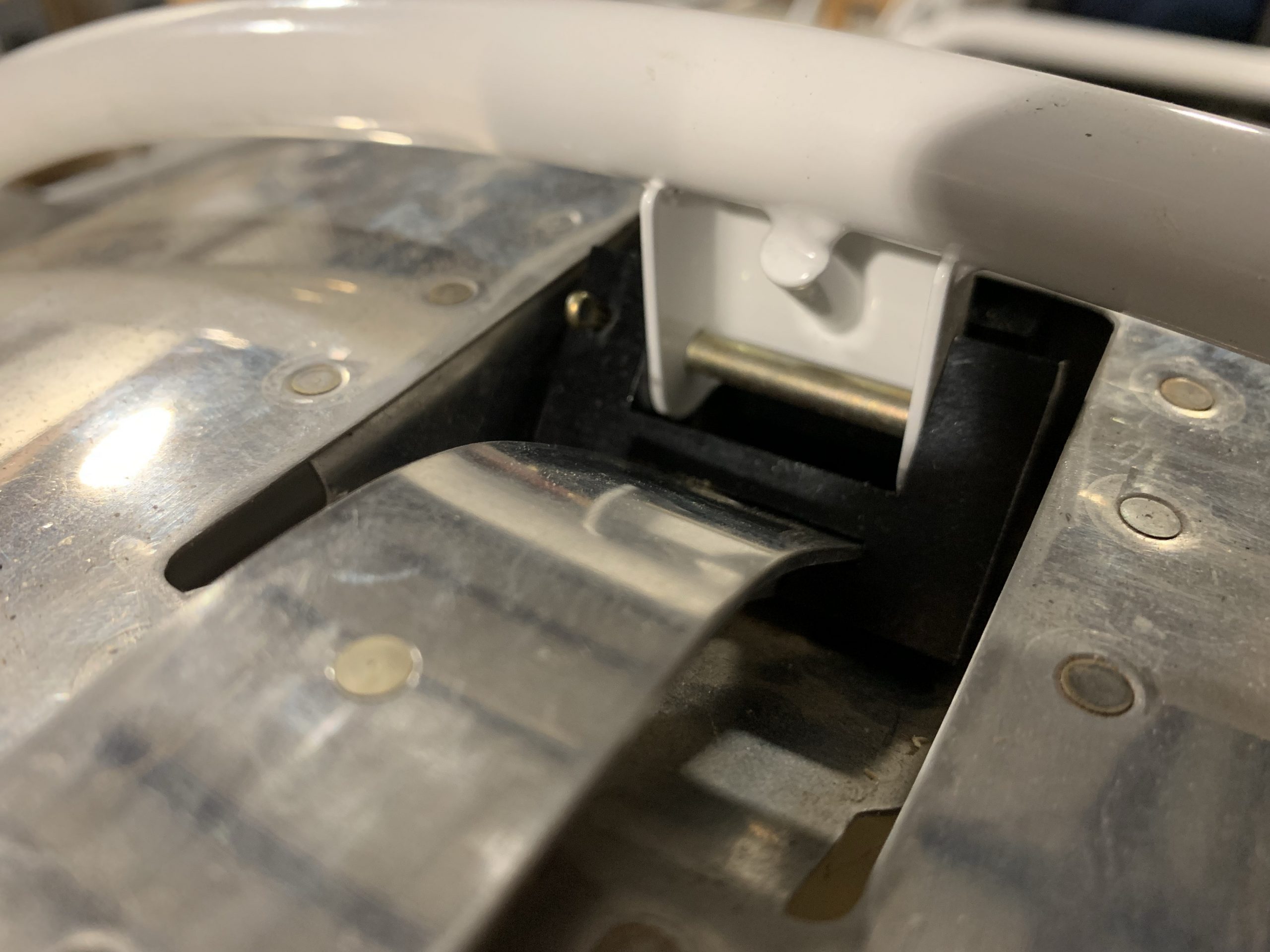 Between the slide rail and the anchor block, the rear of the frame is rock solid in this position, though it can still move side to side since the rail isn’t yet secured. But having this done means I’m finally feeling confident about centering up the slide rail and getting it drilled and screwed into the fuselage – and once that’s done, the two forward rails can follow, and then I should be ready to move on to the canopy bubble itself.