So not a ton to talk about tonight really. Initially I’d figured on threading those CPI2 harnesses back through the firewall and getting the pertinent harness bundles laced for hopefully the final time…but then I got to thinking about whether that was a good idea. The whole reason I had to wait until I pulled the rest of the harness through the firewall is that the engine side of the CPI2 harnesses are already terminated, meaning they have to be threaded through bulkheads from the engine compartment. Thing is, that firewall passthrough may not be the only place I need to thread them. For example, one of the ignition coils will be mounted on top of the engine case, which means that harness will presumably have to pass through the baffles.

Now, that might not be a huge deal down the line – the coil connector plugs can probably be depinned if necessary, I’d just have to identify the connectors and get the right tool. But the crank sensor is a different matter – the wire connections aren’t detachable there. I’m not 100% sure whether or not those wires will need to pass through baffles, but in the end it seemed that the better choice here was to wait on these bundles. I might well end up with a chicken/egg type setup here, though…if I wait until I’m doing the engine baffles, that’ll mean I’ve fitted the cowl, which almost surely would require that the forward upper skin be riveted in…and once that’s done, finishing up the harness bundles will be a lot less fun. But still, I have little to lose by waiting; there’s nothing at stake right now other than me wanting this task done.

So instead I turned to the firewall layout. Some low-hanging fruit here was to go ahead and mount the brake fluid reservoir and cabin heat control box, both of which already have prepunched holes in the firewall. Getting the brake reservoir in place also required riveting a couple nutplates, which I guess were skipped way back when I first did the firewall. The heater box I just clecoed in place for now; it’ll need to be sealed when I final-mount it, and even though that’s still just using a couple bolts, I figure I’ll wait on that.

From that point forward, I was kind of on my own. The one thing that I figured I’d definitely lay out was the manifold block that’ll be used for the fuel and oil pressure sensors. The FWF drawings provided specify a location for that block, and while I don’t necessarily have to abide by that, I see no reason not to. Rather than actually mount it – I’m definitely not ready to commit to anything like that – I just drew an outline of the block and marked the two hose attach locations. 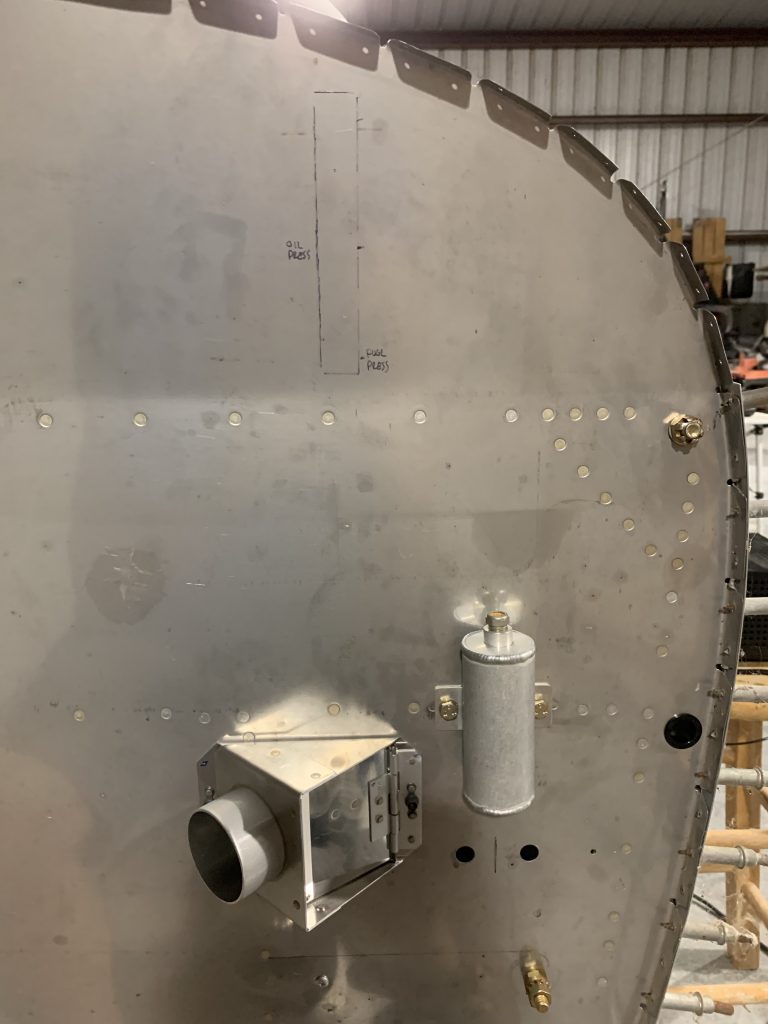 The next thing I tried to tinker with was the location of the battery box; since this is a relatively large item and accessibility is a concern, it seems like something to work out early. The FWF plans call for putting it on the right side of the firewall, about halfway up; I’m sure I’ll end up on that side of the firewall, but I’m less enthusiastic about the vertical location. The big question is how to tie the box into the firewall angles; they’re not exactly conveniently located for this. I suspect I’ll probably end up needing to add another angle on the back of the firewall to accommodate this, but the main takeaway is that this requires some thought. Something else to mull over a bit, I suppose.

Of course, somewhere near the end of the night I remember that I could also have been working on stretching the engine mount to better fit the firewall mount holes. Maybe I’ll work on that next; I’m sure I’ll want to install and remove it a few times while working out some of this firewall layout stuff.