Finishing with the engine mount, doing some wire routing

As I headed out into the hangar to get to work this evening, it occurred to me that I hadn’t had a single super bright idea about how to stretch out this engine mount to get the second pair of holes drilled. All that random thinking about making a jig with threaded rod and so forth hadn’t gone anywhere concrete. So I ended up just trying to stare at things and work out a solution, and eventually I got to something.

Basically, there are two ways to approach this: either I need something inside the mount exerting outward force to spread things, or I need something pulling down on the bottom of the mount. The latter seemed impossible since I had nothing to pull against, but finally I realized that if I stopped thinking in terms of using something like a ratchet strap, there were other ways to approach this. What if I could just hang weights off the bottom of the mount and try to work with the positioning that way?

And that’s how I ended up with this amusing Rube Goldberg setup: 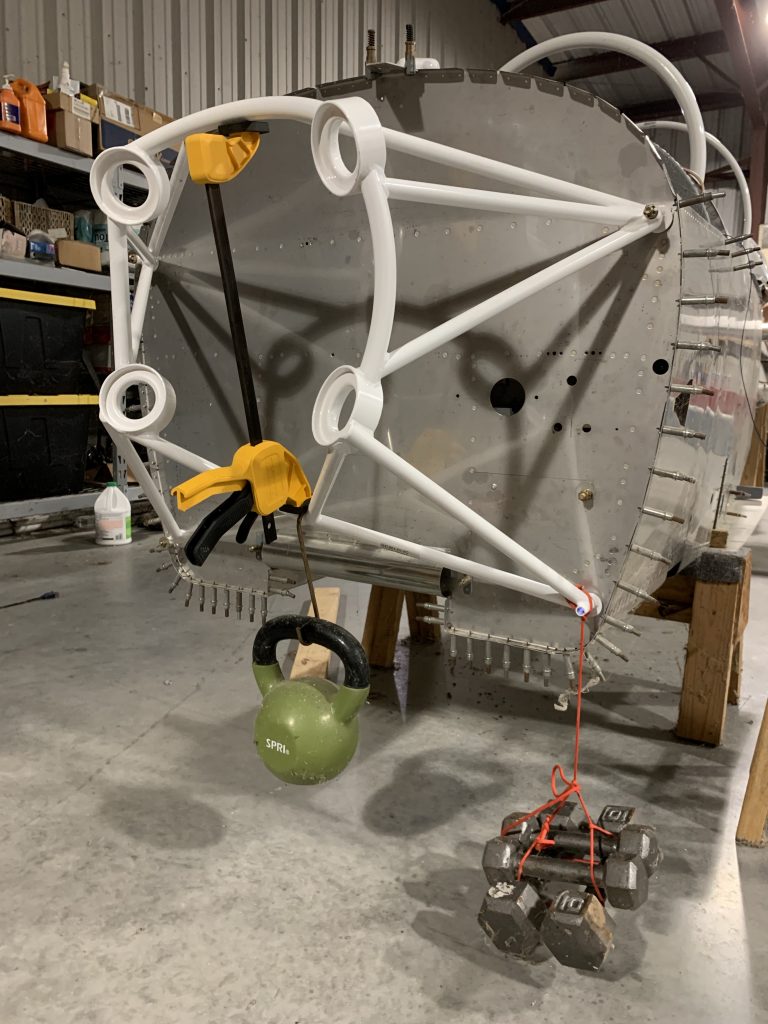 We’ve got a 30-pound kettlebell hanging on the center of the mount, using an S-hook normally reserved for hanging up a caliper while working on the car brakes, plus another 30 pounds of dumbbells lashed together with some spare paracord and hung from the corner with more spare paracord. The only real issue with the hanging-weight idea is that you don’t have a lot of fine control over how much the mount stretches, and that’s where the big clamp comes in. Hanging the weights as shown here got the hole just a tiny bit above where it needed to go, so with the clamp in place, I could carefully apply that last bit of force to get it all lined up nicely.

The only remaining issue was how to pull the mount snug against the firewall while doing this; as it sat, the mount face wanted to sit about 1/4” off the firewall. I initially tried using a ratchet strap secured to a long piece of lumber going through the center section, but the strap would have been bearing on the edges of the forward side skins and the firewall flange, and surely would have bent something if I’d started cranking down. Then I had another epiphany – the other lower hole could be used for this. I just had to run a 3/16” bolt through the hole and the mount, add a large washer so it’d bear against the mount hole, and tighten the whole thing down.

That pulled both lower holes up nice and snug, and once I had the lower right hole drilled and bolted, the other was already lined up nicely and didn’t even need any drama to get it set up. The only concern here is how annoying it’ll be to attach this mount unless I permanently stretch it, so I’ll probably have a go at that at some point, but not tonight.

Instead I decided to continue thinking about FWF type stuff. One item I’ve been putting off for a while is drilling the 3/4” hole down the right side of the aircraft for all the engine sensor wires and such to pass through. That seemed like a nice digestible project for tonight, so I got to it. I’d been thinking that laying the hole out properly would be a challenge, but once I got down to it it wasn’t tough at all. The only hiccup I had was that the unibit drifted a bit as I was opening the hole, and got into the edge of one of the firewall angles, so I had to then go in with the dremel and sanding drum to smooth things out.

Once that was done, I installed the snap bushing and had the fun of feeding the wire bundle through from inside, and now I’ve reached the milestone of having random wires sticking out through the firewall: 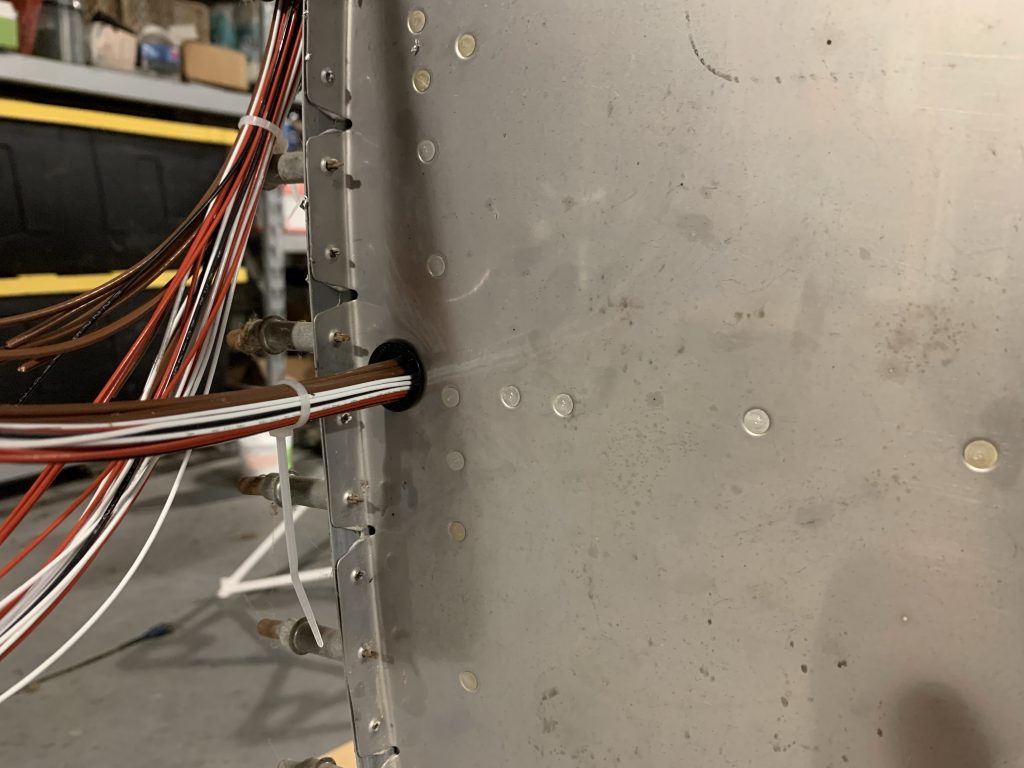 Assuming I don’t get that replacement canopy block in sometime soon, I think I might start marking up the firewall for component locations, just to sort of spitball ideas. The FWF plans include some suggested layouts that I’ll likely start with, but I’ll have to consider some other items not shown there that I’m adding – like the battery-bus fuse block and E-bus relay. Those are pretty small but they still need homes, and routing of wiring is also a concern.

The other item I could work on now would be feeding the CPI2 FWF harnesses back through the firewall and finishing up the lacing of the relevant harnesses in the cabin. Those had to wait until now, as they’re already terminated no the engine side and so can’t be fed through in the other direction. It’d be kinda nice to finish up those harnesses inside, I suppose. We’ll see.