So the title sort of sums up tonight’s short work session, though I feel like I’ve got an idea of how to move forward with the fitting. I’m still going to let that idea marinate a bit before I try doing anything about it (plus I’m gonna run it by the Van’s forum people). Even better, tomorrow I’m flying a Young Eagles event and I see that one of the other pilots is bringing the RV-8 he built. Hopefully he shows up so I can pin him in a corner and pepper him with questions. You know, in a friendly sort of way…

Anyway, out of the assorted issues I outlined before, I felt like the first one to really consider was the large gap between the canopy and windscreen frames. As mentioned before (I think), the limiting factor on forward movement of the frame is an anchor pin at the aft end, which fits into a plastic block that rests against the back of the bulkhead just behind the back seat. One thought I had was to remove some material from that block to allow the frame to go further forward, but it seemed like I’d need to remove a ton of material. To help visualize how things might need to change, I decided to get the anchor block out of the picture entirely and see what kind of gap I could get with the anchor pin actually contacting the bulkhead – that is, as far forward as it could physically go if I went completely bananas on shaving down the block.

This seemed promising at first – looking at the gap on the left side (from where I was working), it was almost nonexistent. Using drill bits as crude feels gauges, the gap was about 1/16”, probably tighter than I’d want in real life. But then I noticed the gap on the right side was a good bit larger. I double-checked at the aft end to see if the anchor pin was centered, and it was. Hmm, seems like this frame is a little crooked. I was eventually able to get an equal gap up front, but only by shifting the aft anchor point as far right as it could go in the socket: 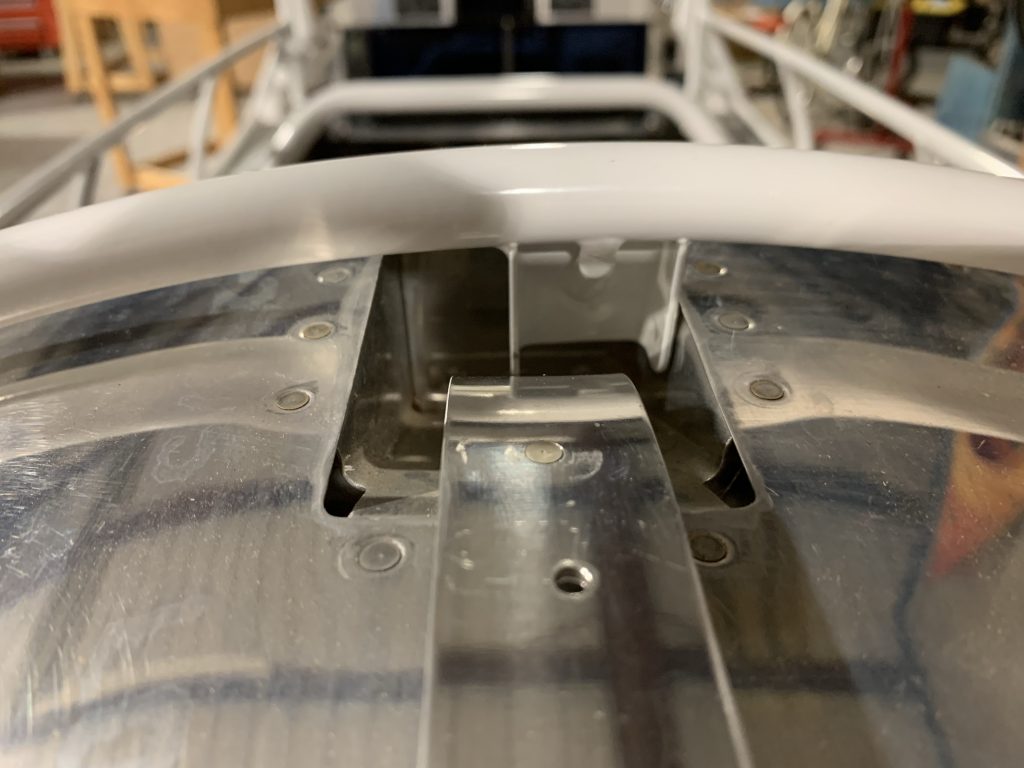 So it seems clear that I’ll need to bend the frame a bit to get both an even gap up front and a centered slide out back. That’s not too awfully surprising, it’s known that these frames almost always need some tweaking to get a final fit, though I wasn’t expecting a sort of twist like this.

But back to that gap up front – with the anchor pin touching the bulkhead and shifted as seen above, the gap was a nice consistent 3/16” all around, which seems like a reasonable number…until you remember that this is without the anchor block in place. At this point I started to get a twinge in the back of my mind, as usually happens when I’m getting subconsciously close to some sort of epiphany. The epiphany completed when I took another look at the anchor block and noticed that the hole for the pin went all the way through it – this wasn’t obvious until I removed the part sticker on the front side. All this time I’d been assuming that the intent was for the pin to barely engage the block, but now I think that’s not the case.

The pin itself looks to just be some rod stock that’s tapered to a point: 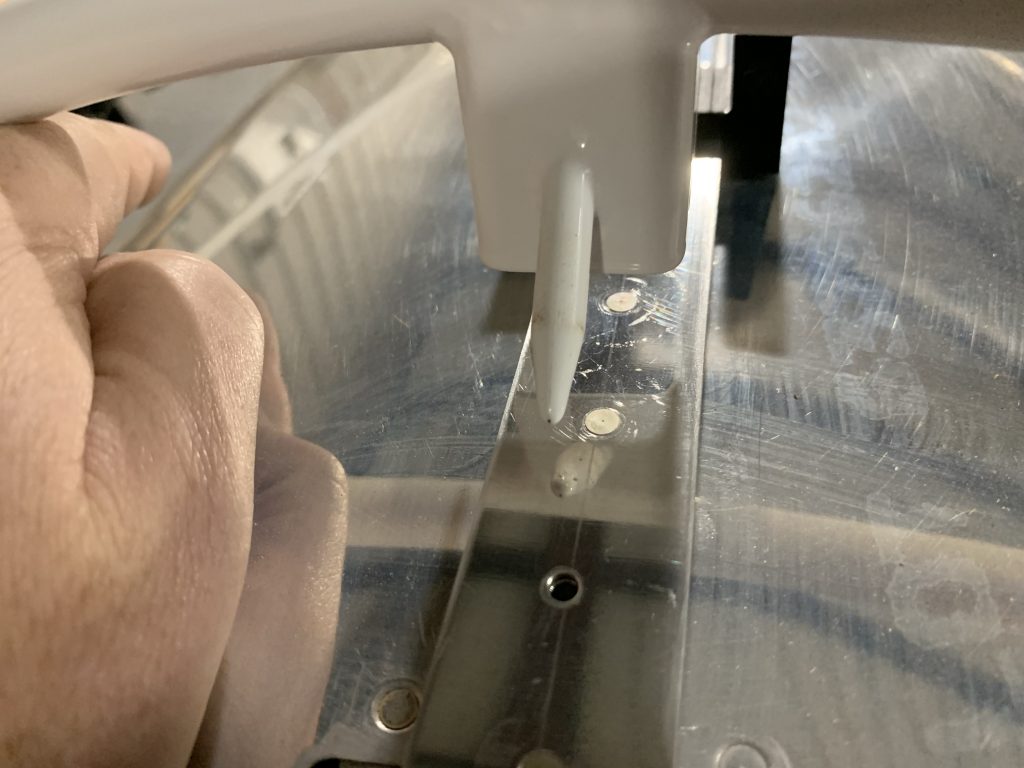 When engaging it with the block as provided, it slides into the block essentially until it gets to the end of the tapered area and stops: 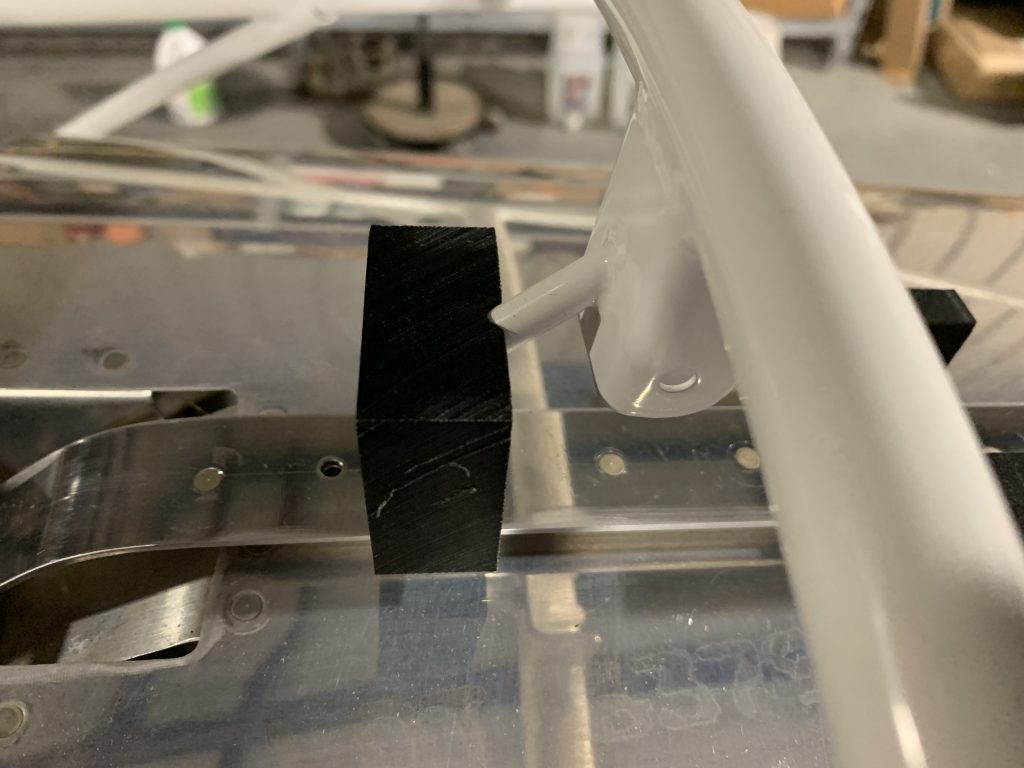 Notably, at this point the engagement isn’t very positive. I didn’t think much about that before, but I was assuming the whole time that the hole in the block was similarly tapered to match the end of the pin. But it turns out that the pin can be inserted further, though it’s a pretty tight fit. It can, in fact, be inserted until it’s nearly sticking out of the front end of the block: 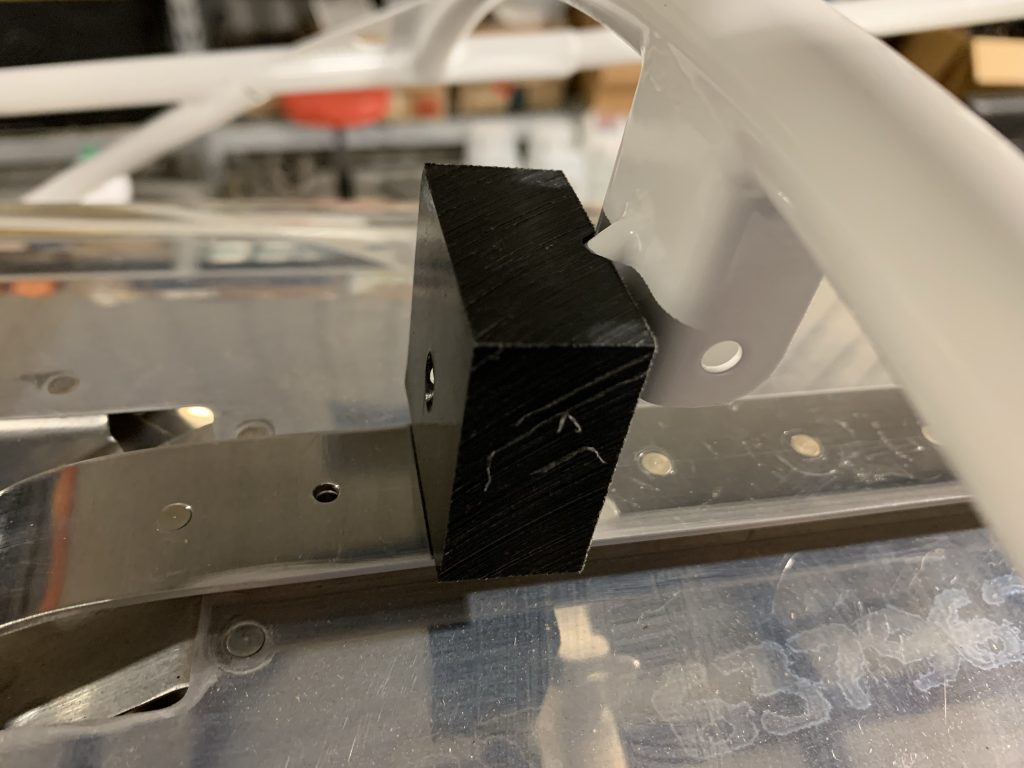 So that all homes in on a path forward to handle the gap issue: if the pin is able to freely drop that far into the block, the whole frame goes further forward and I no longer have the massive gap up front. And instead of shaving material off that block while trying to keep it square, I’d just need to open up that hole in the block a bit. Currently it’s a nice slip fit with a 1/4” drill bit, so I imagine the anchor pin is also 1/4” OD rod, and would slip in there nicely if not for the additional thickness of the powder coating. Probably I can just get in there with the next size up of numeric drill bit and remove a tiny bit of material, maybe still leaving the origin ID towards the front end to keep the tip of the pin from contacting the bulkhead and doing damage over time.

This, again, is an idea I’m going to run by the forums, and maybe by that -8 builder if I see him tomorrow morning.

As a final note, there’s going to be more frame bending to do in addition to trying to square the thing up. While looking over the manual section that talks about “massaging” the frame, it also mentioned “possibly” needing to bend the aft most portion of the frame for proper clearance from the slide rail. A glance at the plans says the appropriate gap is 3/4 – 5/8”. Yeah, I’m going to need to do some bending there, as my gap is currently way larger than that: 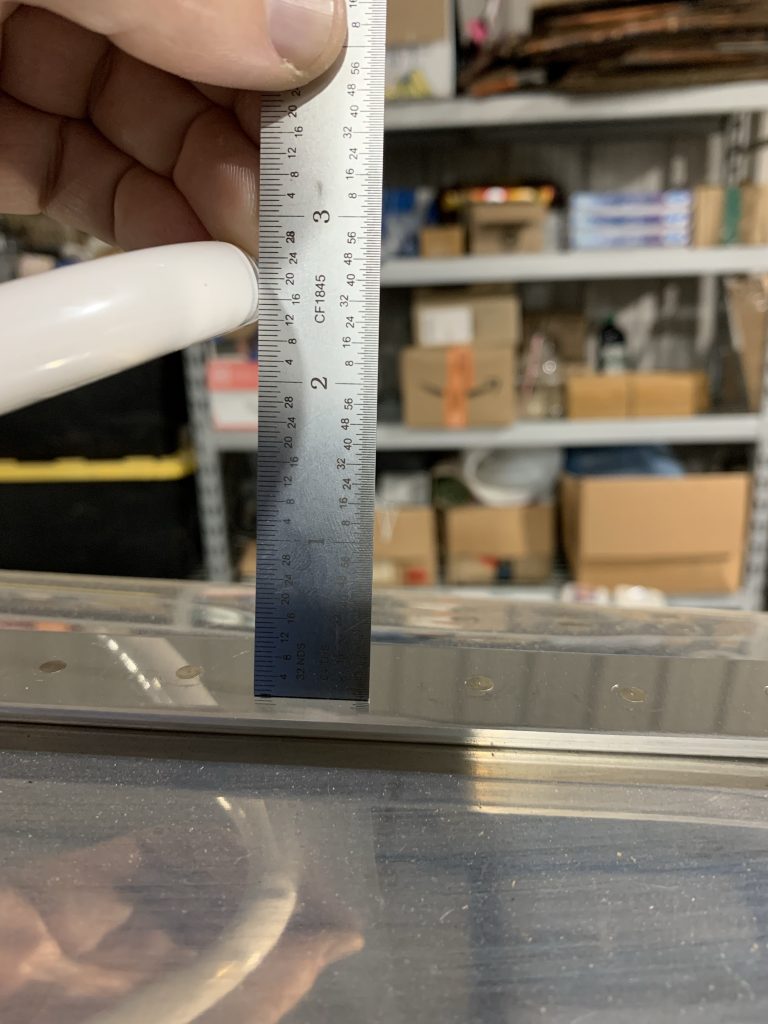 And that’s without even getting to possibly needing to expand the lower forward part of the frame for proper alignment with the fuselage sides. The alignment there doesn’t look too bad offhand, but I’m going to want to add some aluminum strips as per the manual to really properly evaluate things. Bottom line, I see a lot of trial-and-error application of force in my future.