Let me start by summing up this evening’s work: that was kind of frightening but ultimately successful.

I shared my thoughts from the last session on the forums and got some good information. Most notably, my suspicion about the anchor pin/block nesting was confirmed: the pin should be going all the way into the block, not just a little bit. That should settle my large gap issues up front…well, once I get the hole enlarged. The hole is currently 1/4”, and the next largest drill bit I have is 9/32. Checking the different drill bit diameters with my calipers, the larger one seemed like it’d be a looser fit on the pin than I liked. To verify this (well, to convince myself not to just drill the block with what I had), I drilled a 9/32” hole in a piece of hardwood I had lying around – which I figured was about the closest delrin analog I had – and test-fit it to the anchor pin. Sure enough, it had a bit of slop that I didn’t really like. On the one hand, it’s probably not super important that this be a really snug fit, but on the other hand, it’ll never be as snug as it is when I first fit things, so I’d rather go for a precise fit out of the gate. So I guess I’ll be hunting up some weird drill bit sizes. Since the pin already goes in, just really snugly, I probably only need to remove a really tiny amount of material.

Anyway, the other item of discussion was the frame misalignment. Here, no one said anything good or bad about my intent to bend the frame, which is pretty much tacit approval on the Internet. That is to say, people are really good about pointing out problems with ideas like this. So my main goal tonight (and what I actually did first, before the block stuff discussed above) was to do the bending.

I’d been thinking offhand about how to do this for a day or two, and had a pretty decent idea how to proceed. Basically, I needed to lock the forward part of the frame and then pull sideways on the back end. So I made my big table into a jig of sorts. A piece of scrap 2×8 screwed to one end of the table served as my clamp point for the forward end, with another piece of scrap used to actually clamp the frame. I drew reference marks to center the frame on the table, then drew a centerline back where the anchor pin was. I’d hoped to find that the pin was obviously off-center, which would make me feel a little better about the whole thing, but that wasn’t the case…it was pretty much dead-on, definitely not out by the ~1/2” I’d seen while fitting on the fuselage.

Here’s a look at the whole setup on the table. I’d originally intended to hand a plumb bob from the anchor pin, but I couldn’t find mine. I decided that a combination square would work just as well, so that’s what’s seen here. It’s also worth noting that, in the end, I added more clamps to restrain the front end, because it took a lot more force than I expected for this operation: 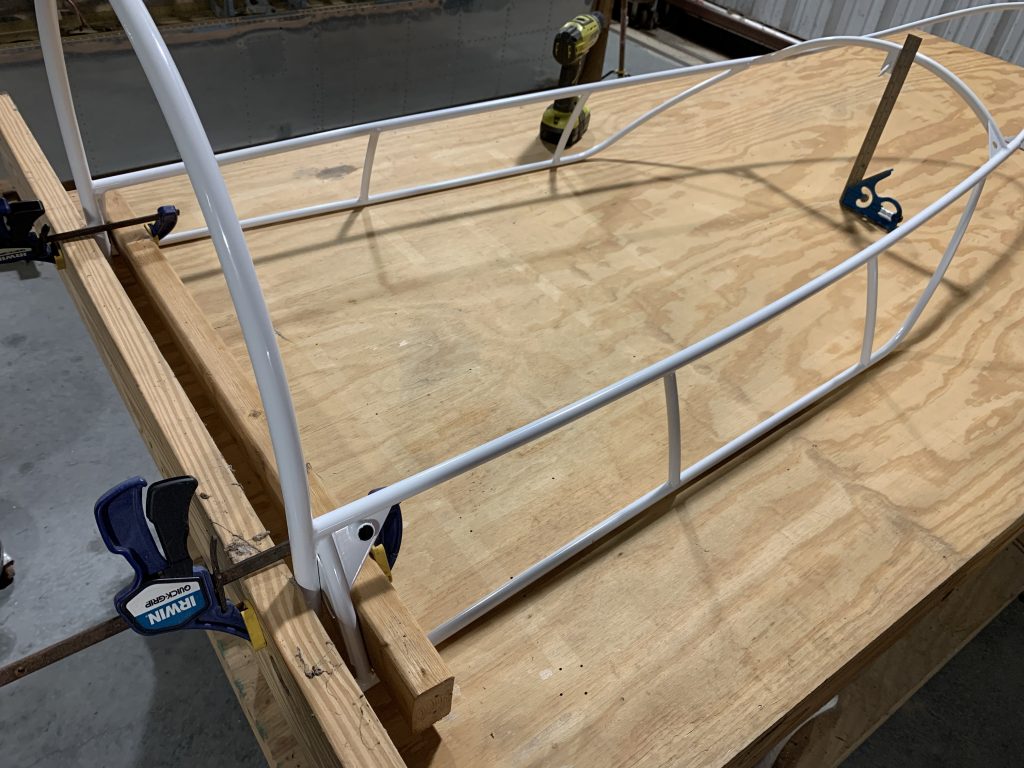 Back to the whole “not off centerline” thing: that really made me stop and think, just to make sure I wasn’t doing something horribly wrong. Eventually I reasoned that the practical fitment on the fuselage was more important than the centerline. I’d checked the thing on the fuselage multiple times, it definitely wasn’t right, and in the end it needed to fit the plane, not some marks on a table. So I drew a second line 1/2” from my centerline, to use as a reference, and got to work: 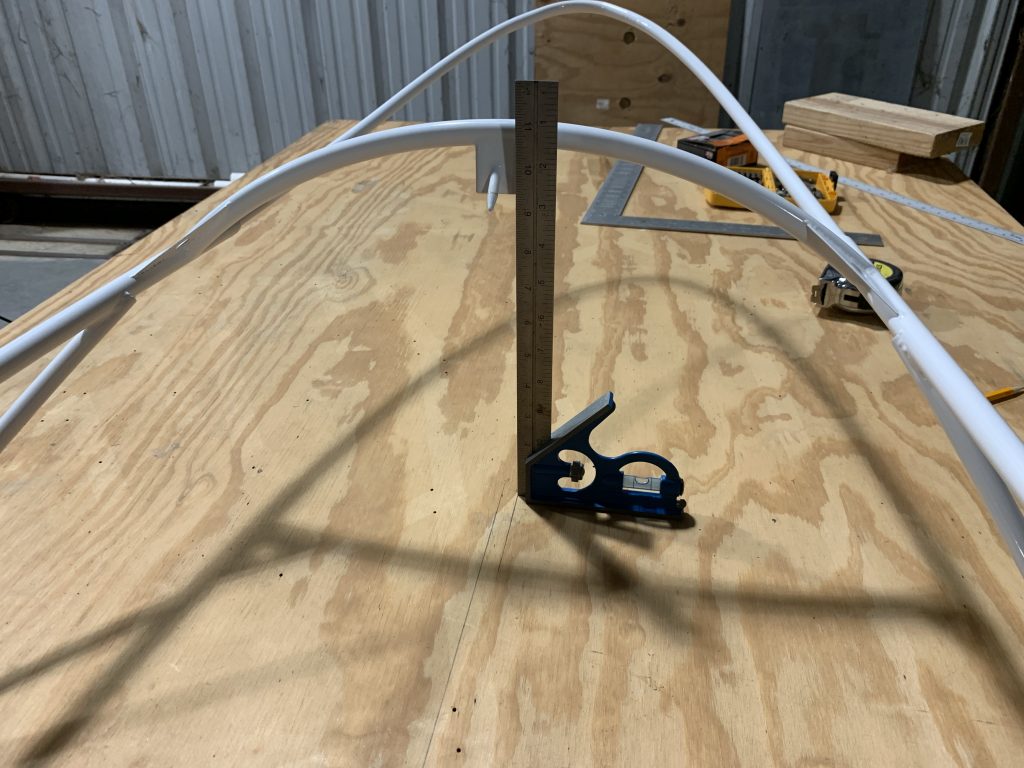 At first, I tried just doing the bending just by pulling in the frame. After all, the manual talks about correcting the bow with “carefully controlled muscle power,” and in any case starting small is a good plan. But it was clear before long that this wasn’t good enough – I got the pin to move a tiny bit, but nowhere near what was needed. OK, time to get some mechanical advantage involved, in the form of a ratchet strap. The fun part was figuring out how to rig this. I ended up finding a large eyebolt lying around, which I installed on the bottom shelf of the table, so I could take the strap over the edge and anchor it down there.

The other consideration was some way to keep tabs on how much I was moving the frame – it was highly unlikely I’d get this right on the first pull, so I needed some way to repeatably pull to where I’d stopped on a previous attempt, and then go a bit further. To handle this, I just laid a piece of thin scrap wood along the left side of the frame. As the frame was pulled sideways, it’d move the scrap wood, and that’d serve as a sort of max-deflection indicator.

Finally, it was time to start pulling. I put what seemed like a decent amount of force on the frame, then released…and the pin had barely moved. The deflection indicator came in handy here, since I could just increment my pulling by a couple teeth on the ratchet each time. All in all, it took probably five or six iterations to creep up on the deflection I needed.

The scary part was that I was putting a lot of force into the system in the end. At first this concerned me because I was sort of necessarily standing right in line with the strap – if it broke I’d probably get a nice welt, but if that eye bolt came loos somehow I’d probably be in a world of hurt. So I tried standing off to the side as much as I could, but then on the last pull I noticed how putting all that force on a single point was noticeably changing the curve of the right-side frame bow. Oh boy, if I ruin this thing it’s gonna be really expensive to get a replacement. After releasing that pull, I sighted down from the back of the frame…whew, seems to have sprung back OK.

Time to do the real check, with the frame back on the fuselage. Before removing it, I clamped blocks on the table to ensure I could put it back in the exact same place if I needed to bend more. Then it was time for another deep breath as I carried it over to the fuselage, slid the rollers back in, and closed everything up…

…and it fits beautifully. Not quite perfect – with the anchor pin centered, the right-side gap is still maybe 1/32” of an inch, but I’m very sure I can live with that.

That was enough fun for one night. I suppose next I’ll worry about the anchor block, then refine the center slide rail, and then see what other bending I need to do while I still have this jig setup in place. I know I need to bend the aft end of the frame down a decent amount, and I may want to spread the forward bow a bit to match the fuselage sides.