So…if I were to go by the construction manual verbatim, the next thing I’d be doing would be to locate the center slide rail on the fuselage, drill the mount holes, and bolt it in place. However, I’m hesitant to do that until I get a good sense for how the entire system works together. Of particular note here is how the center slide rail bends down at the forward end, which causes the back end of the frame to drop in place when closed and put an anchor pin into a locating block. This provides a much more precise location of the frame as compared to the somewhat loose-fitting slide block. What this all means is that, to my way of thinking, it might be necessary to work on the fore-aft location of the slide rail, to ensure that everything nests in place properly when the canopy closes.

With that in mind, today I started out by extracting the canopy frame from the finish kit crate in order to do some test fitting. That, in turn, required a bit of excavation, since the frame is at the bottom of the crate. Next, I gathered up the slide hardware, which took some time because I couldn’t find the bag with some specific screws for a while. The aft hardware is pretty simple – there’s the hard plastic slide block, which gets attached to the frame with a clevis pin. The only mild complication is that the block isn’t predrilled for the clevis pin, so that’s yet another variable in the fitment back here that I’ll need to work out. At the forward end, there are rollers that nest inside the slide channels, which then attach to mount points with screws, nuts, bushings, and spacers. Those mount pieces then nest into tubing on the frame itself, and will eventually be bolted in place there.

With all that stuff assembled, I got the canopy frame in place and slide closed. For now the slide channels are just resting in place on the cockpit rails; refining their position will be part of the larger fitting job. Similarly, the center rail is just sitting on top of the fuselage. 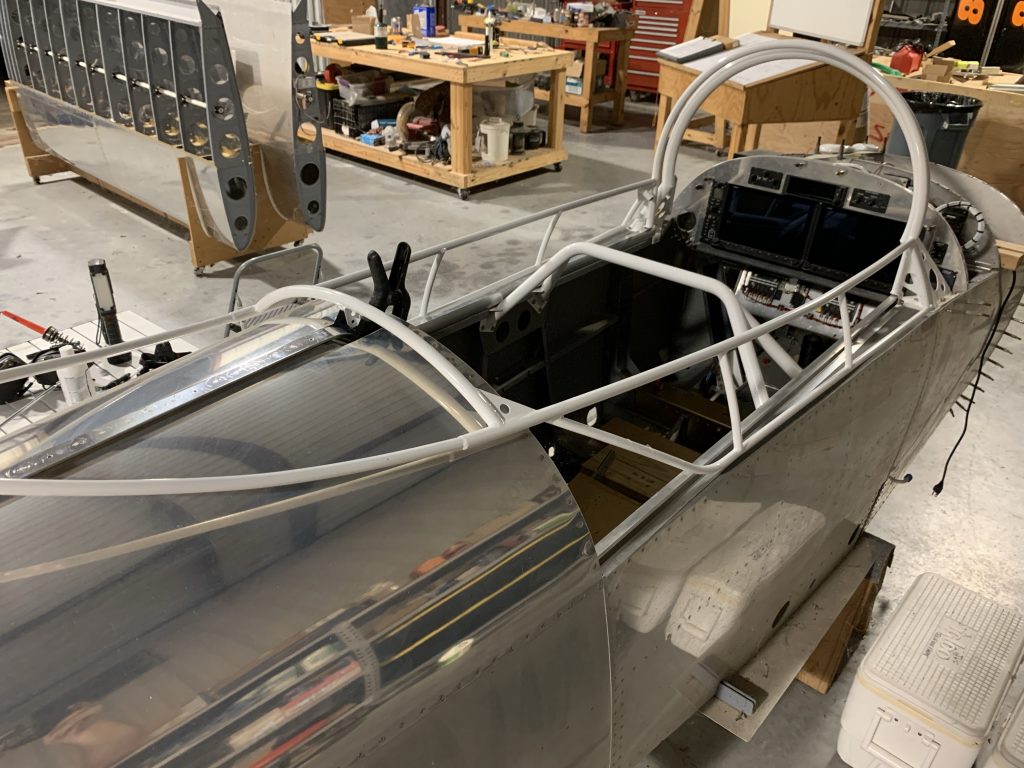 So far, this operation has posed more questions than it’s answered. For one thing, with all this stuff in place, I don’t feel like the canopy frame is able to go far enough forward. I don’t think it’s supposed to actually contact the windscreens support, but it currently sits about 3/4” apart when closed. Later on in the construction manual, when discussing laying out the cut to separate the provided canopy bubble into the windscreen and sliding canopy sections, it suggests trapping a sheet of cardboard between these two pieces to provide a straight cut line. That implies to me that these pieces should sit a lot closer together…but the only way to make that happen would be to modify either the anchor pin on the frame or the anchor block it fits into.

The other question concerns drilling that hole in the slide block. I haven’t been able to find any sort of guidance on where or how to locate that hole. This seems important too, since if it locates the frame too far from the rail, the anchor pin won’t be able to engage in the block. And of course for this whole operation, the actual position of the slide rail figures in.

So I called it a night on that somewhat unsatisfying note. At the moment, based on some fiddling, I think  I want to be able to move the slide rail aft a bit from where it’s naturally resting right now. This should be achievable with some more filing on the relief on the forward end, but I’m definitely going to be thinking things over before I do anything of the sort.