Well, so far there’s been no ship notification for the replacement canopy rail parts I ordered on Monday, which may very well mean that I won’t have those on hand before we head off for our road trip. Meanwhile, I found some time in between trip prep to do a little more work, this time on the pitch trim servo wire routing.

First step was to get the horizontal stab back in place. This was way more fun than it should have been; having that turtledeck skin in place makes attaching the stab way more interesting. Despite my best attempts, I couldn’t figure any way to reach inside and put any of the attach bolts in place from inside. I guess this is just going to require the services of someone really small – it’s going to require going even further into the tail than I went while riveting. I made do for now by just dropping the bolts in place from above to at least sort of hold the stab in place while I worked. One thing I want to figure out is whether or not it’d be sensible to go ahead and final-attach the stab, though it’s not a critical decision at all.

Next up was working the actual wire routing. I decided to add another adel clamp on one of the stab attach bolts to guide the wire up and over the rear stab spar. From there it’ll be attached to the elevator control horn tube, which will of course move with the elevator itself. I added a small snap bushing to the inboard elevator rib for the wire to go inside and connect to the actual trim servo: 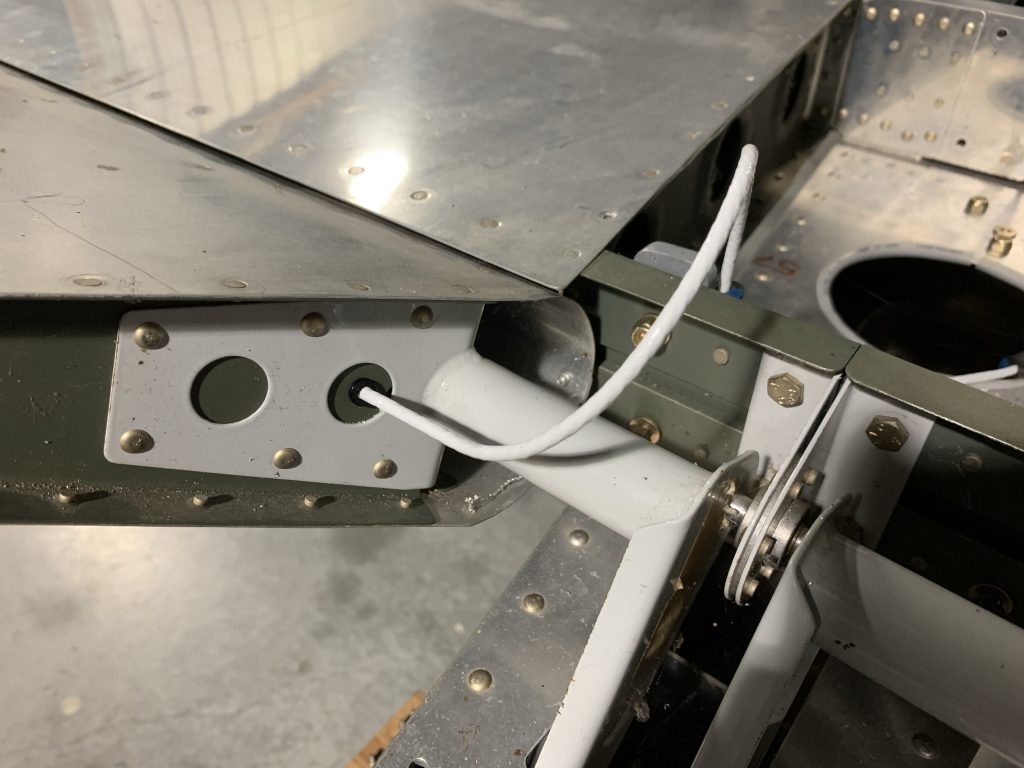 Actual connection to the servo will be done by way of bare D-sub pins (ie not inserted into a connector). By using these, and staggering the wire lengths, the result is a nice and compact connection that’s also watertight (the whole thing will be covered by heat shrink). I’d fully intended to get these terminations done tonight, but after a lot of thinking and visiting schematics and thinking about how the trim works, I’ve decided to wait until I can actually test the trim system.

The reason for this is that since I’m staggering the wire lengths, it won’t be easy to switch the two trim wires if I get the polarity wrong, and after all that reading mentioned above, I don’t feel super confident in my ability to reason out which wire goes where. There’s no real reason not to wait until more stuff is wired up to do this, either; it just cost me a little bit of satisfaction tonight.