Alright, time to start thinking big-picture. Electrical stuff is fun and all, but I need to start thinking about working on the canopy at some point. This matters because the brittleness of Plexiglass is directly related to temperature – the warmer, the better. Basically, I don’t want to find myself starting on canopy stuff when it’s getting colder outside (of course, “cold” in Houston is very relative).

So what I’ve been thinking is that I want to get most of the electrical stuff behind the panel done, and then pretty much pause that work and move on to the canopy. Practically, my general plan is to get the ground terminations done at the firewall, do a final inspection, and do the ceremonial first power-on of the panel. Once that’s done, then I’m going to break out the Plexi.

Tonight I was looking at the grounding. First up was getting the ground bus block installed on the firewall. This block provides a bunch of 1/4” tabs on the interior side for my individual grounds, and a big fat lug on the firewall side for grounding to the battery. Practically, mounting it is easy, but I’ve spent a lot of time worrying about inadvertently putting it somewhere that will cause problems down the road when I get to working on FWF stuff. But after a lot of studying the FWF drawings, I decided on a spot and did the deed tonight.

Interestingly, as provided the block only provides one usable mount hole, where the big ground lug goes through. I didn’t feel this was enough for secure mounting, so in addition to the main lug hole, I added a smaller hole at the other end, where a #6 screw and nut keep the thing from rotating. So now I have the bus block mounted in place: 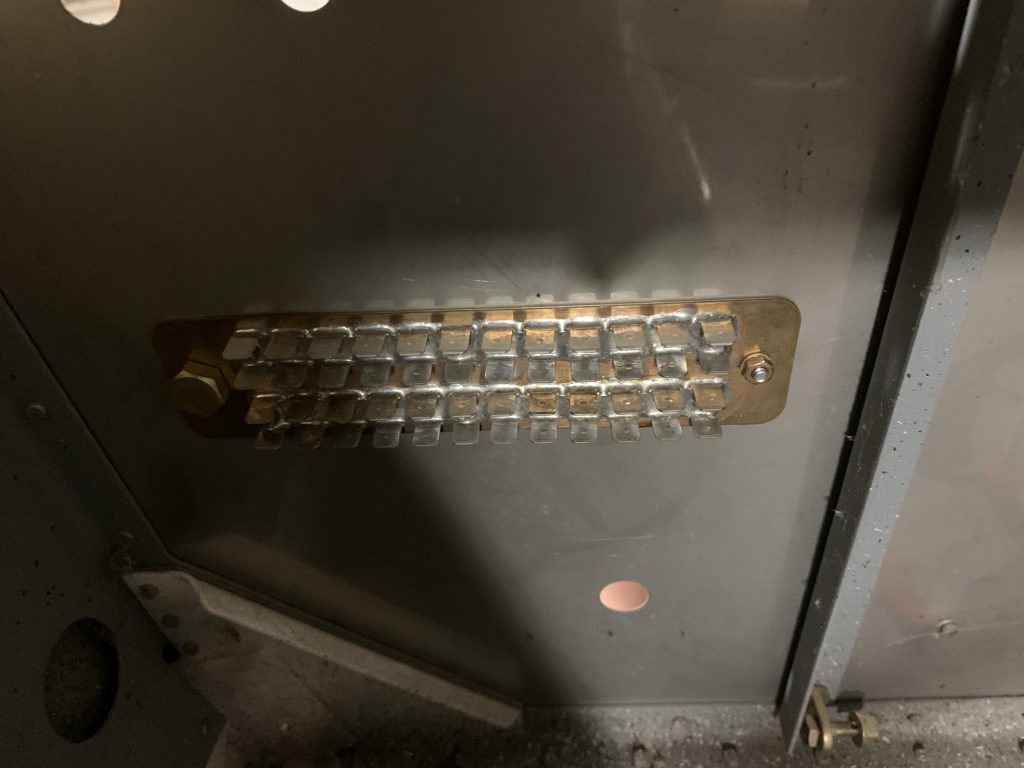 Next up was looking at the routing of the big bundle of ground wires. I laced this bundle up on the bench a while back, but like a lot of the lacing work from then, things seem loose – the individual laces like to move around. So as I’ve done other places, I pulled the bundle out of the gear tower and re-laced the whole thing. With that done, I should be able to get it in its final routing next time out, and start doing some terminations. None of this will be too complicated, but there are a lot of wires, so I’m just going to be doing a bunch of trimming, labeling, and crimping. Plus there’ll be a bit of work figuring out how to secure the bundle, but I have a pretty good idea how I’m going to approach that.