Yes, I’m really writing this at 1 AM. No reason other than I forgot to do it earlier and it’ll bother me to wait and combine it with another day’s work.

Since I committed to not doing any more rotisserie work on the fuselage, and since the weather was looking good today, I decided it was time to shoot epoxy primer on the tail spring. That thing just kept developing surface rust, but I didn’t want to paint it so long as it was being used as a rest for the rotisserie, since whatever I put on it was bound to get marred. But today, I pulled it off and gave it a really thorough wire brushing and cleaning preparatory to getting it primed.

The epoxy primer I’m using is 2K rattle can stuff, which means that once I break the seal on a can, I’m in “use it or lose it” territory. I’ve been waiting for this event so I could take care of a batch of stuff – notably, the two elevator push tubes. The self-etch I sprayed on those got marred in no time installing and removing the rods, so I’d decided to give those epoxy primer as well. Finally, some rust was also showing through the socket for the tail spring, so I cleaned that up and masked around the tail so I could give it some epoxy as well.

All that is to say that there was a fair amount of prep work before I ever got to actual priming. The batch of parts worked out pretty well – I got everything covered and used most of the can in the process. After letting everything dry for a while, I decided that I’d go ahead and install the Bell fork and tailwheel I got from Flyboy Accessories when I put the tail spring back in (though I didn’t fully tighten the nut on the fork, since this likely won’t be the final installation).

With that installed, I felt I had on choice but to put an actual attached wheel on the ground. It’s surprising how much more airplane it looks in a three-point attitude, even if the front is way lower than it’ll be in real life: 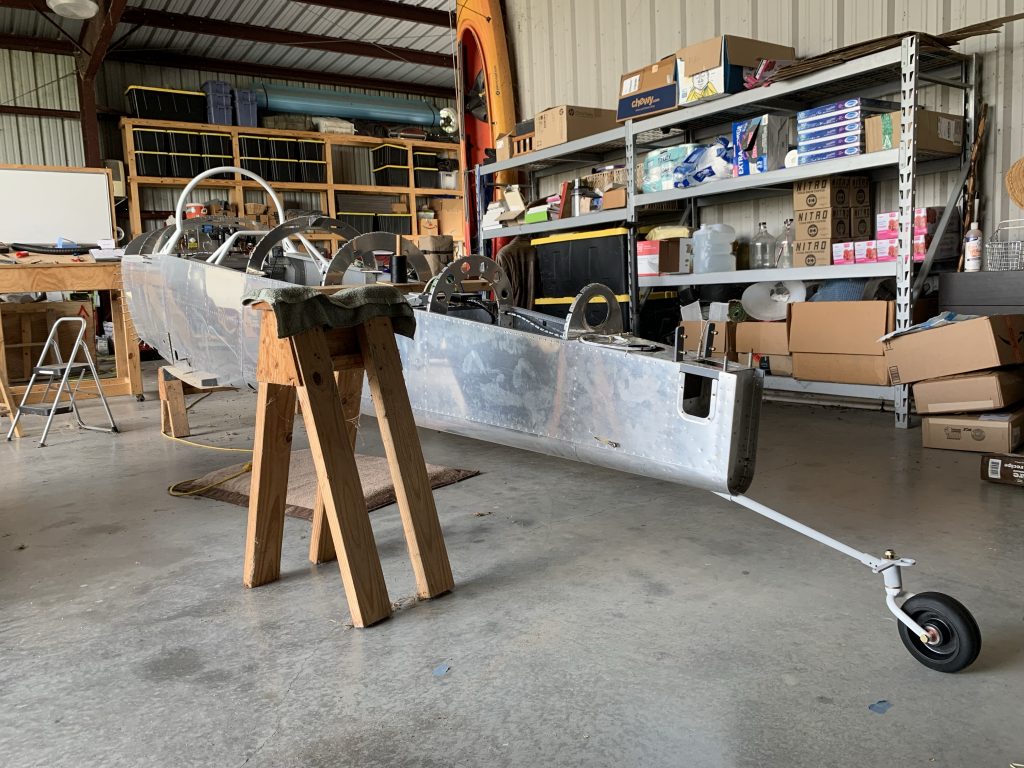 While I was waiting for primer to dry, I was busy reading up on wire routing in the tail. I figured my next move would be to mount the empennage again, and see about working out the wire runs for the pitch trim and tail strobe, even if this wouldn’t be the final installation for any of that stuff. So once I got the tail spring back on, I moved on to attaching the empennage. In my mind I was thinking this might be the final mounting, but as soon as I set the horizontal stab in place, I realized that was wrong. The stab projects further forward than the aft most turtleneck bulkhead, so it’ll have to be off and out of the way whenever that gets riveted. I also discovered that installing the bolts for the horizontal and vertical are a lot more fun with that bulkhead in the way. Torquing those for final install will be interesting…

So that’s where we are now – the empennage is back on, though I still haven’t quite figured out how to route the strobe cable. The pitch trim is pretty easy, but the strobe wire has to exit the rear bulkhead somewhere and then route down to the lower rudder fairing. The latter part is easy, but I’m bothered by figuring out how to route the wire through the compartment with the elevator pushrod and control horns while keeping it out of the way. Gotta think about that one some more.