OK, so technically this is the summation of a few really short work sessions, none of which (until today) seemed worth writing about, but I guess in the end it comes to the same general conclusion, which is that I haven’t done much in the past week or so. I really need to make my transition to my summer schedule, by which I mean getting up early on the weekends and getting as much done as I can before it gets stupid hot out in the hangar.

In any case, I just put up with the heat around midday to get some measurable progress done on this switch console. I’d been putting this job off, figuring it’d be not much fun to do – after all, the harness end for the console is tucked over by the right gear tower, and will only have a short stub coming out of the tower. Good makings of some tight-quarters work.

Eventually I bit the bullet, put all the supplies and tools I needed in the fuselage, laid a few 2x4s on the seat ribs, and climbed in to get to work. And like most tasks on this build that I’ve somewhat dreaded, it ended up not being too bad at all, though it was still tedious.

I did discover one issue, though…after clipping each harness wire to final length and sliding on the heat-shrink label…I had an extra label. Apparently I never did lay in a ground wire for the Flyleds wig-wag switch I put over here. This is mildly annoying, but in the scope of issues I might have run across while working on this harness, this is way on the minor end. It’s also easy to fix – rather than running an additional wire from the ground bus over to the switch console, I’m just going to tie the wig-wag ground into another switch inside the console. Since none of these are signal/audio type grounds, there should be no danger at all in combining them. This is all handy since it’s just work I have to do on the console itself, which means I can do it on the bench vs in the airplane.

Anyway, with that obstacle addressed (in theory at least; I haven’t done the fix yet), I got to work terminating all the wires with sockets, and then started loading up the connectors. The large micro-fit connector which constitutes the majority of the circuits was straightforward. The other connecter is a mega-fit, required for the higher current circuits, and here’s where things got interesting. Try as I might, I could not get these sockets to go into the connector.

Eventually I retreated inside for some research and discovered something really important…it turns out Molex makes two different series of mega-fit connectors, and the housings and contacts for each series are only compatible with that series. Well, I bought one variety of housings and pins, but got the wrong type of sockets.

Given the tight confines inside the fuselage, I think the best way to handle this is to leave the sockets I installed today alone, and swap out everything else for the TPA mega-fit hardware…again, much better to rework the stuff in the console, on the bench, vs in the airplane. But it also means I’m done with this housing for a while, depending on whether I decide to go ahead and place a Digi-Key order now (probably) or put the parts on my list for a future order.

Update: After some research, turns out this distinction only applies to the connector (female) side, so in fact all I need to order are new connector housings for the sockets I’ve already installed. This both simplifies things, and makes the resultant order more annoying since I’ll probably pay twice as much for shipping as I do for the actual parts.

But hey, at least I’ve got one nice-looking connector to show off: 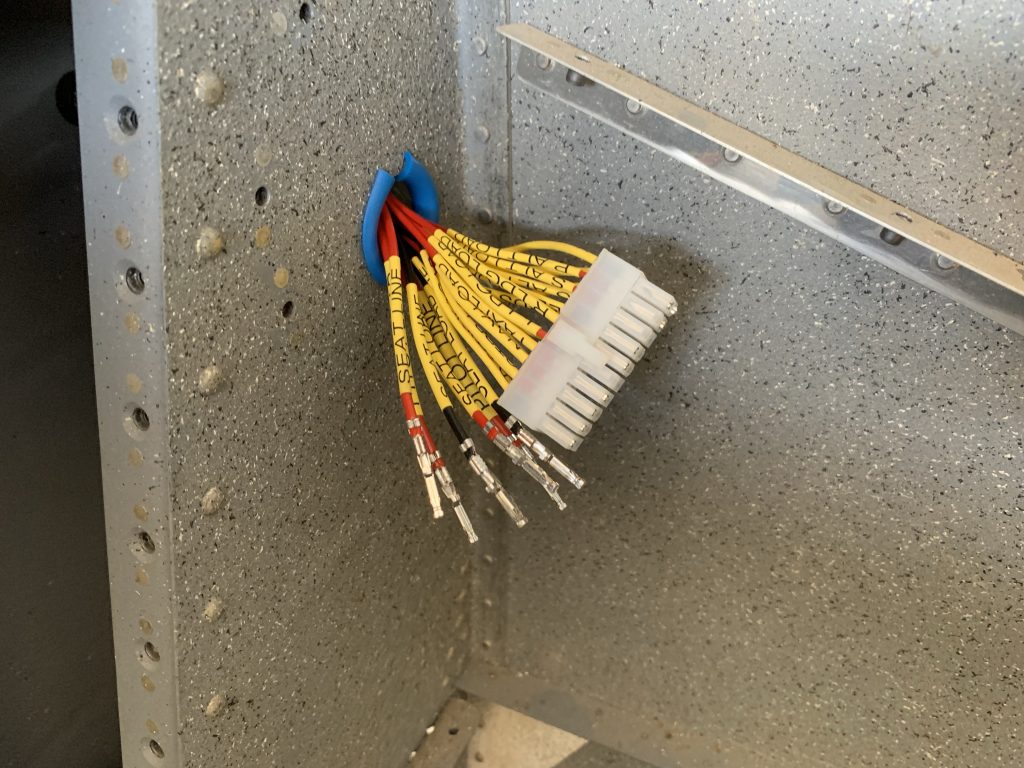