Today I started out with a specific goal: finally solving the problem of securing the harness bundle coming up the right gear tower. After a whole bunch of staring, I decided the way to go was to mount an adel clap to the forward gear tower brace. I was kind of surprised to discover there was already a prepunched #8 hole pretty close to where I needed it, which made it a little simple to figure out that positioning. I added a nutplate to the spot, so I could just install a screw to secure the adel clamp.

This didn’t quite go off without a hitch, though. When I drilled the screw hole to final size, it didn’t seem like the air drill was running at full speed. Then when I went to go swap to a #40 bit for the nutplate rivets…I heard buzzing from inside the drill. Turns out a mud dauber got in there somehow, and was apparently stranded; even after removing the quick-disconnect air fitting and banging the drill on a hard surface, it wouldn’t come out. So I ended up disassembling the drill to get the stupid thing out.

Anyway, I digress…Installing that nutplate required me to remove the instrument panel surround as well as the upper avionics shelf. While I had the shelf off, I decided it was a good time to go ahead and take care of the harness between the CPI2 backup battery and the main ECU unit. The prefab harness was a good foot or so longer than I needed, so I elected to cut it down and re-terminate it with new Molex pins. Some cable lacing on the harness, plus a few zip-tie mount pads, made for a nice tidy end result: 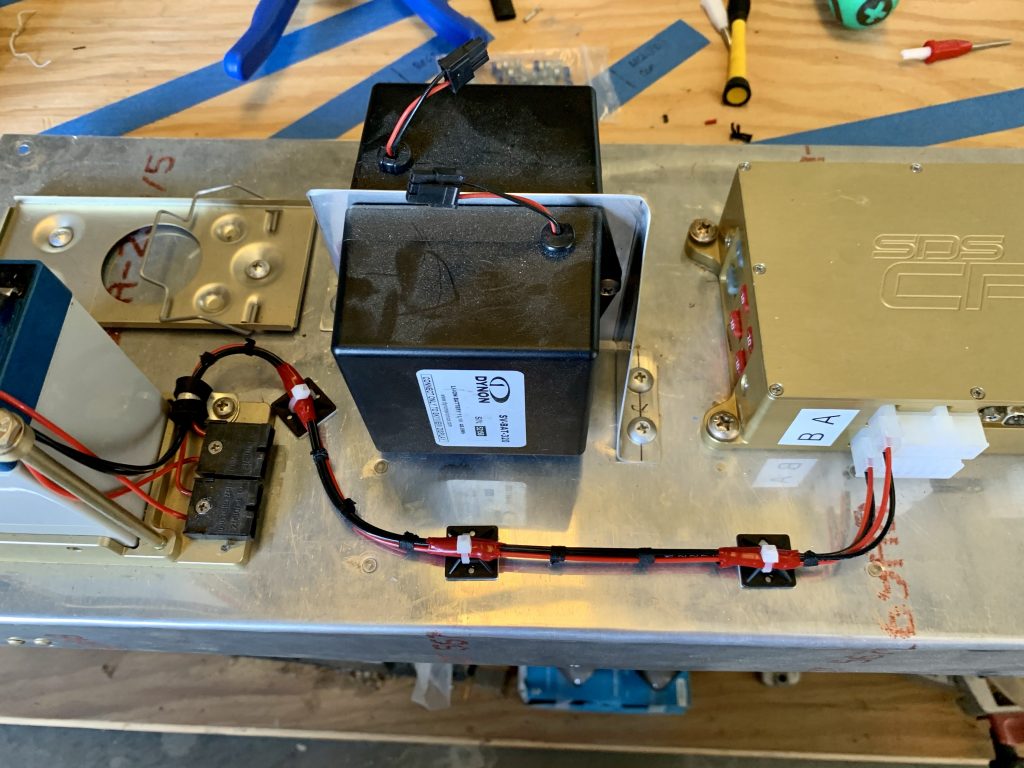 So now the shelf is back in the fuselage with the harness rerouted…I think next up should be the terminations for the voltage regulators, along with maybe going ahead and terminating the pigtails for the GPS antenna and avionics fan. I also want to shorten and re-terminate the roll servo connection at the forward network hub – there’s a lot of excess wire length there that’s just untidy. Then I guess I get to think about the CPI2 and assorted panel mount switches.