Yup…that’s it, I’m done with network cables. Well, sort of…more on that in a bit. Tonight was just making those last two cables, which went pretty much with no additional explanation needed. These two plus the last one from yesterday gave me the three cables from the forward hub to the ARINC and EMS boxes, along with the Skyview MFD (thus beginning the daisy chain seen yesterday).

The two cables to the ARINC and EMS are nice and tidy, but I may end up lacing them together…or else figure out some way to secure them in place here. Maybe a cable loop on one of those mount screws? For now, a good old zip tie makes them tuck together decently: 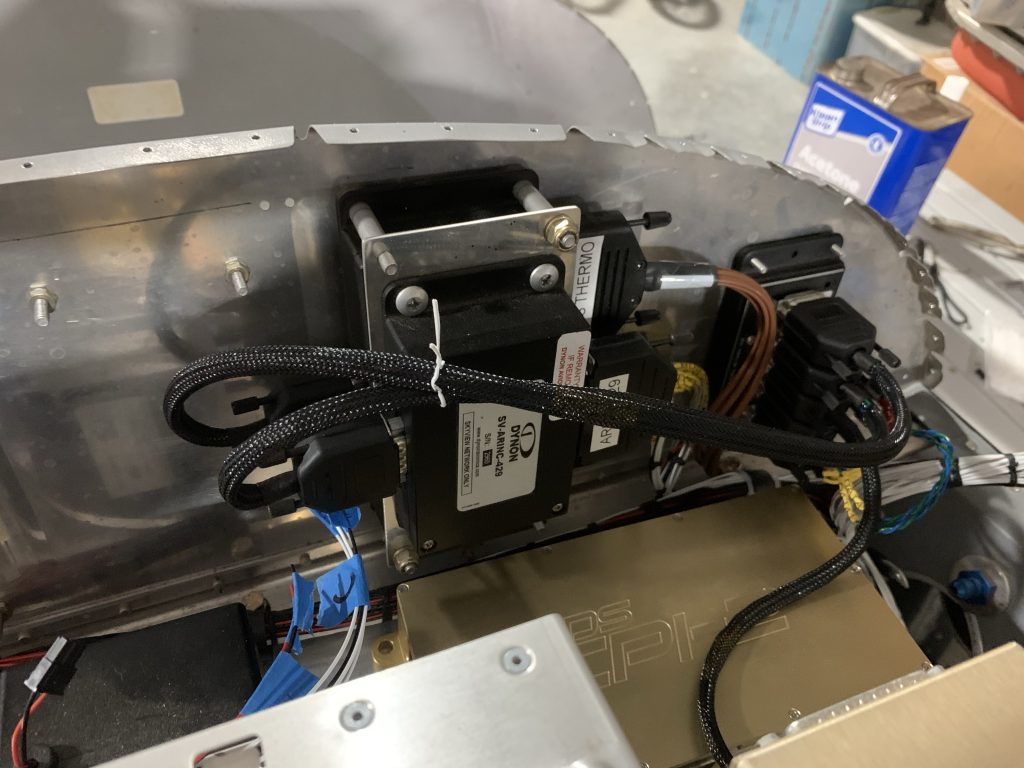 Also visible in the lower right of that photo is the cable going to the Skyview display. Here’s another view of that one: 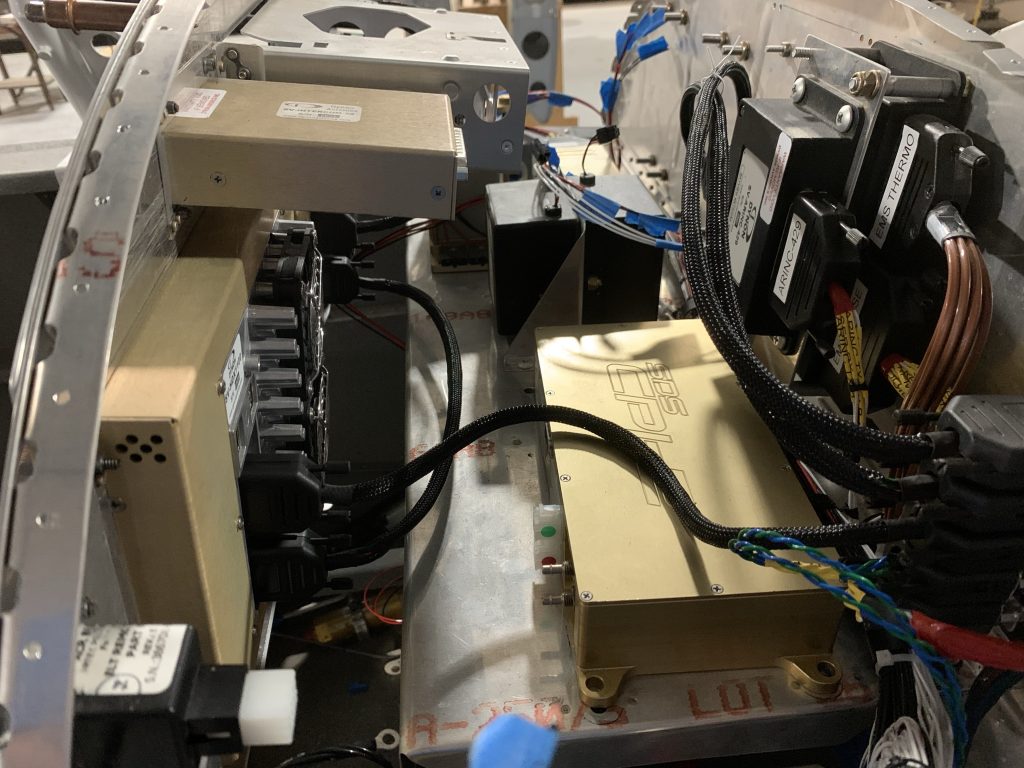 This brings me to the “well sort of” part of being done. The one thing I forgot to account for when measuring for this last cable was the nice big service loop in the rest of the center panel harness. The idea is that I can remove the panel, bring it back into my lap, and then disconnect all the plugs. The main service loop is plenty long for that, but there’s only maybe a few inches of extra in this network cable.

The contrast is abundantly clear in this photo, showing the large main service loop compared to that little jog in the network cable: 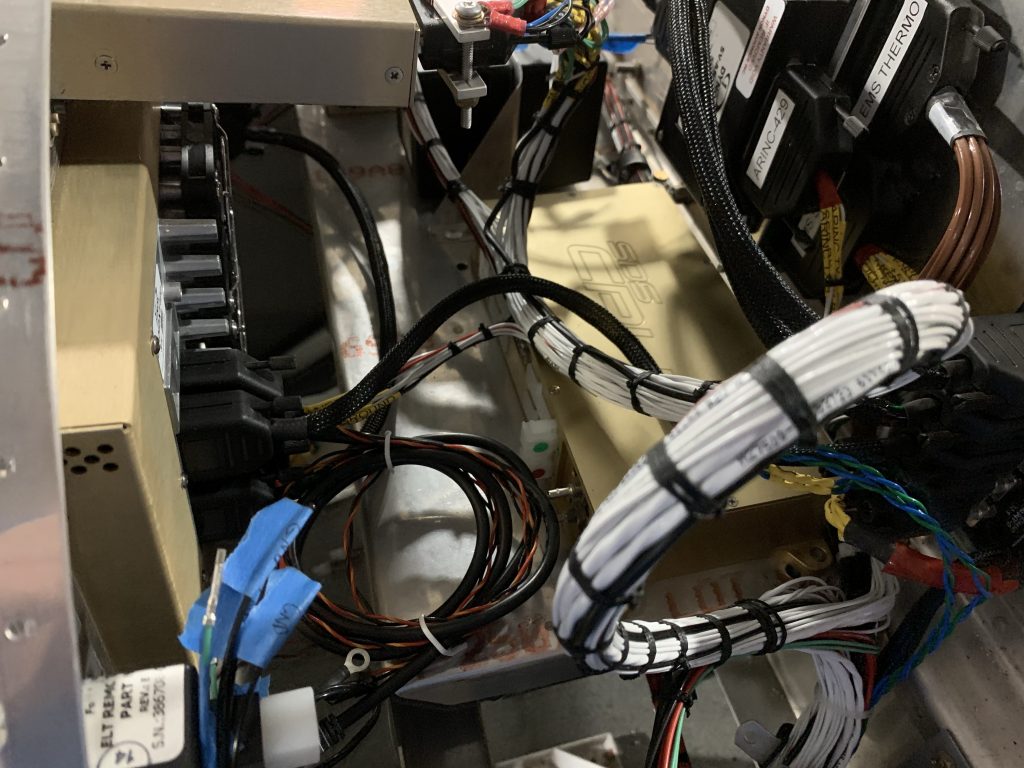 I’m going to leave it as-is for now – among other things, I don’t have any more 22AWG black wire with which to make another cable – and at some point test to see how annoying it is when removing the panel. I expect I’ll probably end up making a longer replacement cable at some point, though…I’m pretty sure that as-is it’ll be somewhere between extremely annoying and impossible to remove the panel with this thing in there. Oh well, can’t win ‘em all.

Final order of business for the night was to get all these connectors labeled. Since these are all bespoke cables for their runs, I don’t want to be at some point in the future where I have to trial-and-error all of these until I figure out which one goes where. Besides, I wanted to remind the label maker that it could print something other than miles of heat shrink tubing: 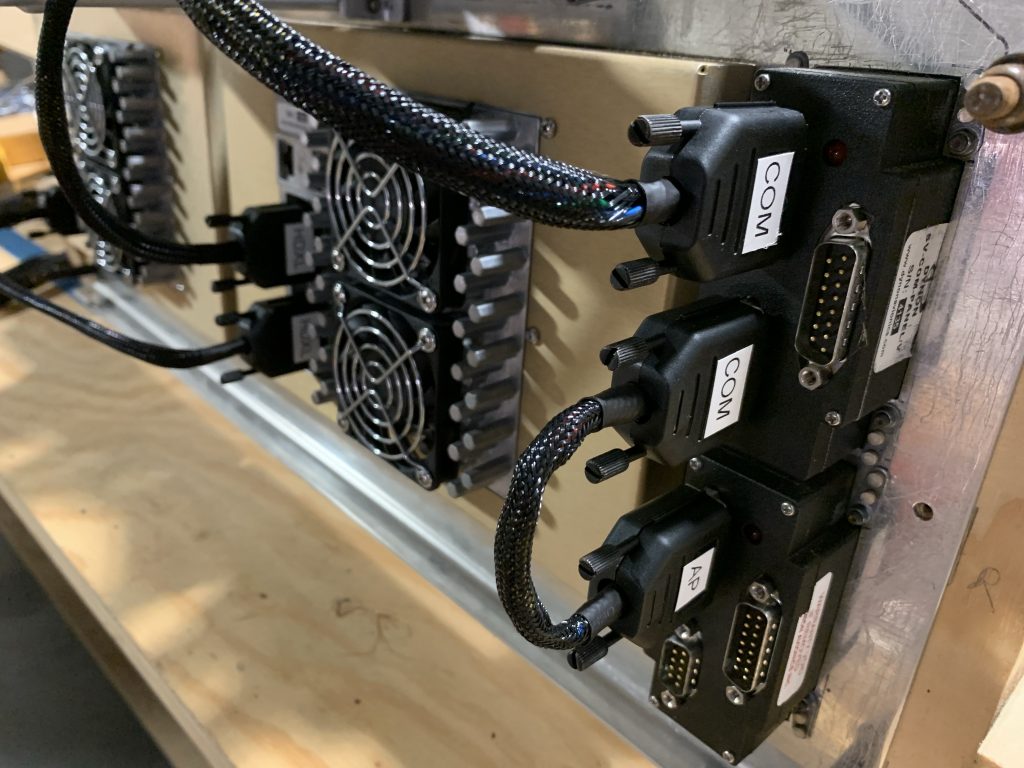 So that’s a good night’s work. I suppose my next order of business is to start working on more terminations behind the panel. I want to shorten and route the harness from the CPI backup battery to the ignition box, and then get the terminations done for the voltage regulators…though this brings me back to figuring out how to secure that main trunk in the gear tower first. Guess I’m going to have to go ahead and cross that bridge.

I also ordered another pile of stuff from Digi-key today, Some of that stuff will be required to finish these terminations, though I’ve still got materials to get started on the switch connections and so forth. Hopefully that order will come in by the end of the week.