Hard to believe I spent an hour and a half just finishing pulling wire bundles through the spar center section, but such is life. I worked on very carefully unwrapping the taped-up section that hung me up on Monday. There were a couple reasons for this – for one, some of the bundled-up wires have tape flags to identify them, and losing those and mixing things up would make life kinda interesting. For another, some of the spots I tapped were to indicate where branches were supposed to go off. Losing that reference wouldn’t be such a huge deal, but still something I wanted to avoid.

It turned out hat taped-up portion was only harboring three wires, the power/ground/disconnect leads for the autopilot roll servo. As I figured, it was easy to free their loose ends and then pull them through the spar separately. With that part settled, I finally finished pulling the main bundle through the spar, and got the snap bushings (which protect the edges of the passthrough holes) worked into place and installed. I also reinstalled the silicon-tubing protection on the gear tower penetration, which had come off when I was fishing stuff through the first time.

Next up was the secondary bundle that needed to go through the spar. This was the stuff I had to split off previously because everything wrapped together was just too bulky to go through one hole. I’d figured this would be the easy part, since it was a relatively small wire bundle, but…nope, not at all. Working from outside the fuselage, I just couldn’t get into a position to feed them through, so I resigned myself to having to work inside. A bit of a hassle since there are no floors in the fuselage right now, but nothing that can’t be “solved” by the strategic use of scrap lumber: 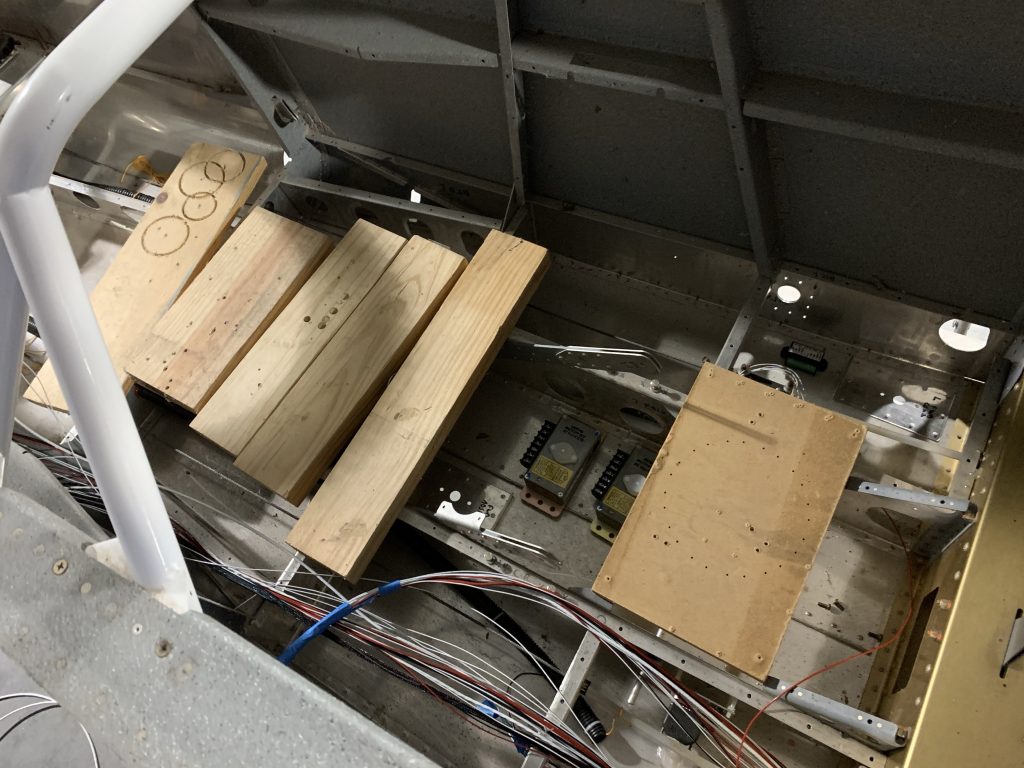 It worked, but wasn’t exactly comfortable. It did, however, provide an opportunity to take a photo illustrating the glamor of homebuilding: 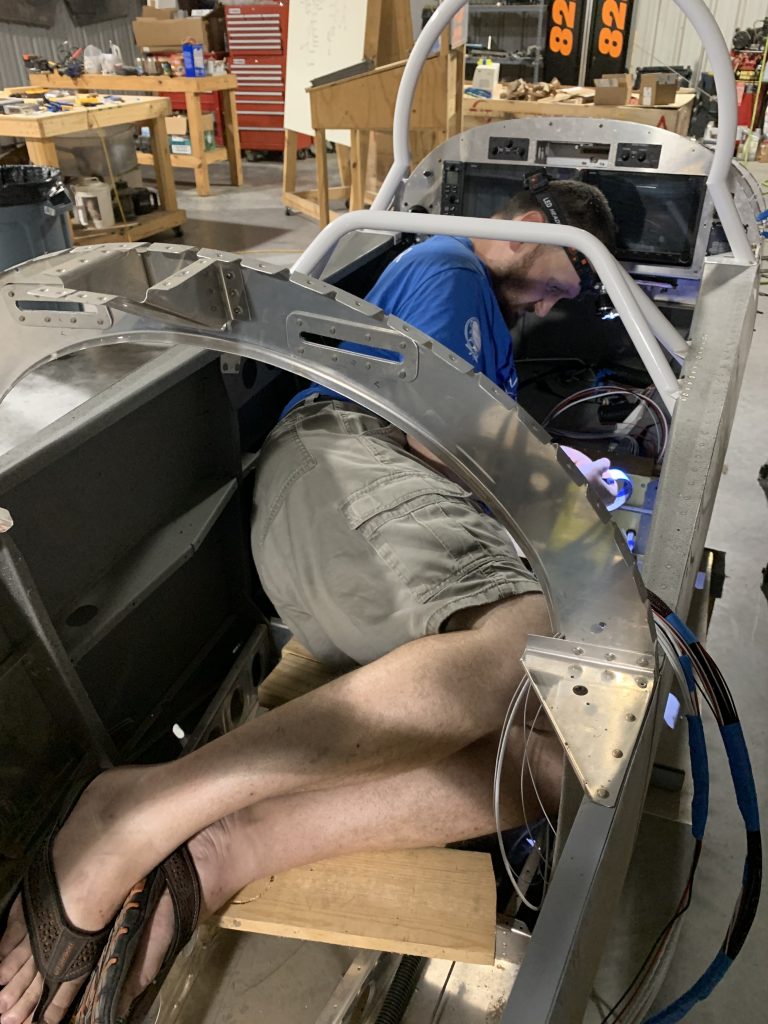 That photo was taken after I realized that even wiring inside, I couldn’t fish the loose wire bundle through. The wires want to curve since they came off a spool, making it impossible to blindly fish them through two small holes about 6” apart. So I got Josie to bring me a roll of masking tape and, while lying on my wonderful lumber mattress, I carefully bound up the whole bundle. With that done, I was finally able to get it fished through: 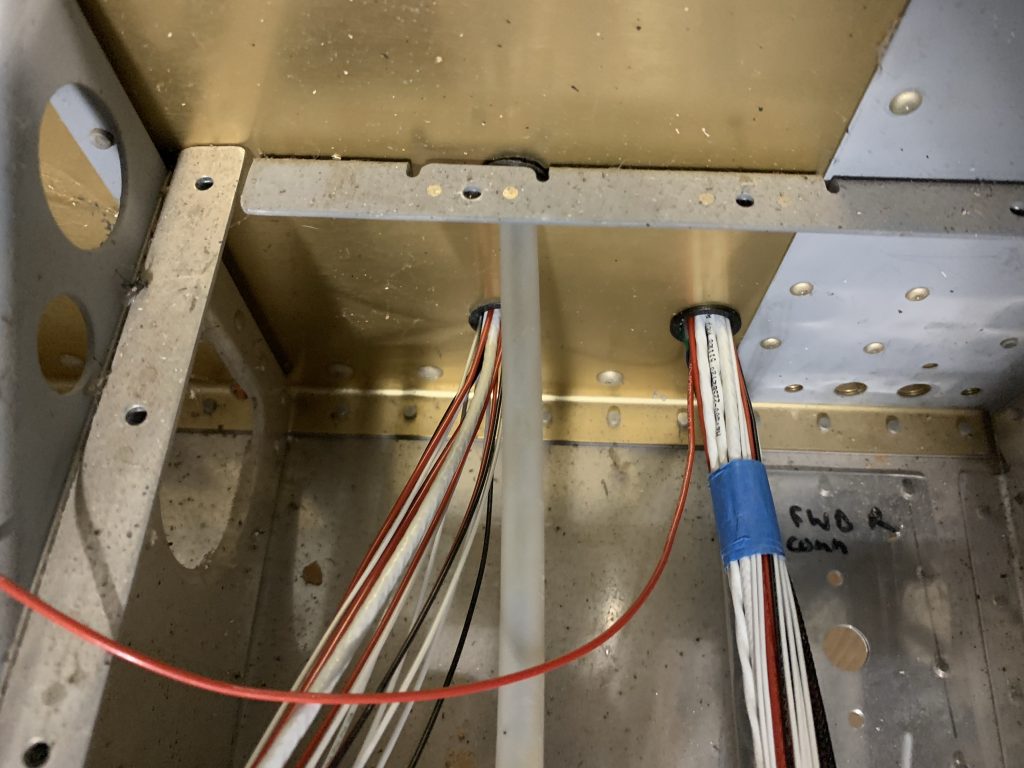 I also spent a bit of time untagging the rest of the main bundle here and essentially figuring out all over again where things were supposed to split and branch. Next up, I get to take all the wires I removed for this routing expedition and add them back to the bundle, before moving on to the next big fun of pulling the bundle through the conduit to the tail. Except first, I still have to do my new riveted anchors to the baggage ribs.

Realistically, though, I think before I do that I’ll finish at least the rough routing under the seat floors. I need to make a couple holes in the center seat ribs for a small run over to the left side of the aircraft; that branch will serve few different things: the rear stick wiring, the roll trim servo, and the left wing disconnects. I figure if I can get some organization done in this area, it’ll maybe simplify and clarify what needs to be pulled through the conduit.

I’ve also been thinking through where to go once I get the main thrust of this wiring stuff done. My engine is still very delayed due to supply chain issues that Titan is having, but after talking with some other builders it sounds like it makes sense to work on some of the upper fuselage stuff ahead of hanging the engine anyway. So maybe from here, I can get the top skins at least clecoed in place, and then start working on the canopy. I figure I’ll also reattach the empennage along the way, and eventually transition into a life of fiberglass work. I guess I also need to decide at what point I should get this thing standing on the actual gear legs.