Harnesses: validating fitment and other stuff

Booo work. It was fun having nice long productive days on the plane, but today was back to the normal grind. So now I’ve got to work on keeping the daily habit going.

I started out tonight trying to continue pulling the harness through the fuselage. I fed the long tail through the spar center section, and got most of it through there before realizing that this would be a little more complicated than I thought. Since I had to bundle up all the stuff that branches off this trunk aft of the spar, I’ve got a few different taped-up sections. Most notably one of those sections is to the forward side, and if I just pull the trunk through, that part will be right inside the center section. That’s not going to work too well for removing the tape…

So I picked something simple instead. I’ve been considering for a while how to label the fuse blocks. There’s nowhere near enough room on the things to put the actual name of things by each slot, so I decided here to just number the slots and then have a key somewhere else that will reference slots to actual names – not too far off from what you find in a typical automotive installation.

I spent a bit of time trying to manually work up labels on the printer that would line up with the slots, then discovered in the manual that it has a setting for printing a series of equally-spaced “module” labels. Perfect for this setup, except that there wasn’t a spacing option that was perfect, so I had to just cope with some misalignment here. But it worked out pretty well once I figured things out and trimmed the printed labels down a bit: 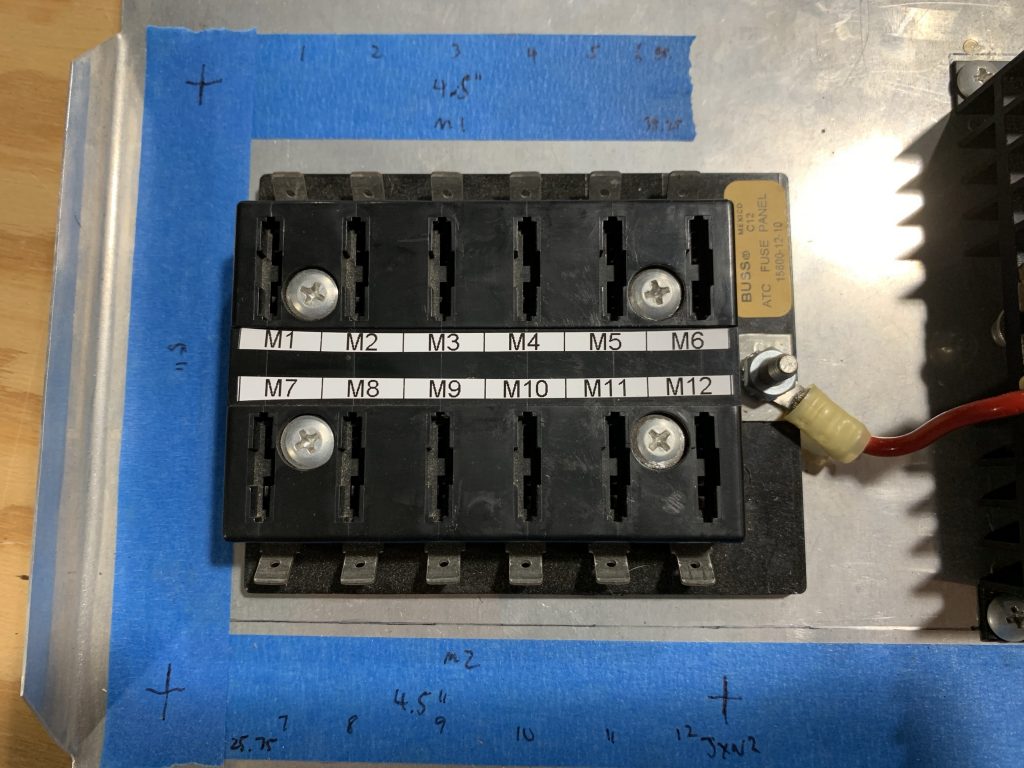 Next, I got to looking at the wiring run for the fuse shelf. I’m a little concerned that even giving what I thought was some extra length on the wire runs, they may not work to go all the way through the routing on the shelf to the various fuse positions. If so, it won’t really be a huge disaster – I can solve that problem just by adding a disconnect plug on the shelf. Honestly that’s something I might want anyway, if I ever want to remove this shelf for service. Without a disconnect I’d have to manually disconnect twenty-some tab terminals plus some cable securing stuff, and then be sure I reconnected it all right later on. I was willing to deal with that, but I’d also be willing to work with a disconnect plug as well.

OK well, before I even consider whether that’ll reach, I really need to start with the stuff I’ve already terminated, which has no real room for adjustment. So I decided to get the upper shelf installed, route the harness where it needs to go, and see that all the connectors I added already will actually work out. And it looks like I’m in pretty good shape; some of the routings are a bit longer or shorter than I’d like in a perfect world, but they’ll work. I’m probably going to want to add some chafing protection in some spots, particularly where the main network trunk cable is going to be touching the edge of the CPI2 controller.

Also, I think I’ve decided that I don’t like my fancy ground bus clamp thing I put together a few days ago for the intercom. I think I’m just going to use a short screw and nut to tie the ring terminals together, and cover the whole thing with heat shrink.

Anyway, here’s a look at some stuff actually hooked up: 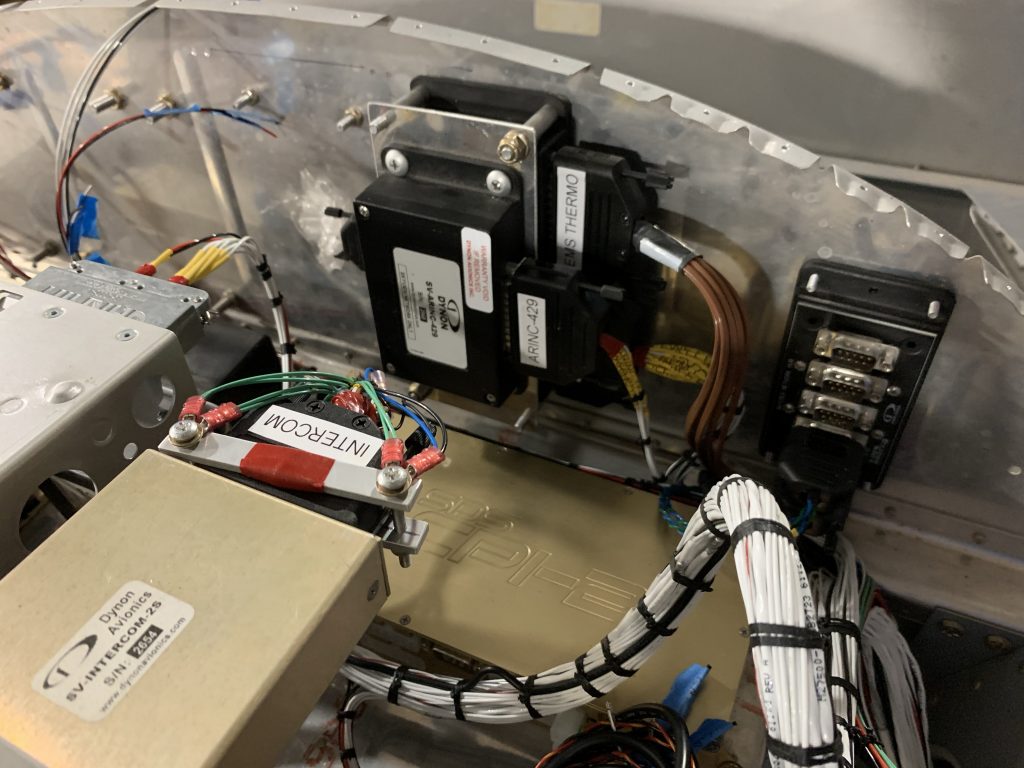 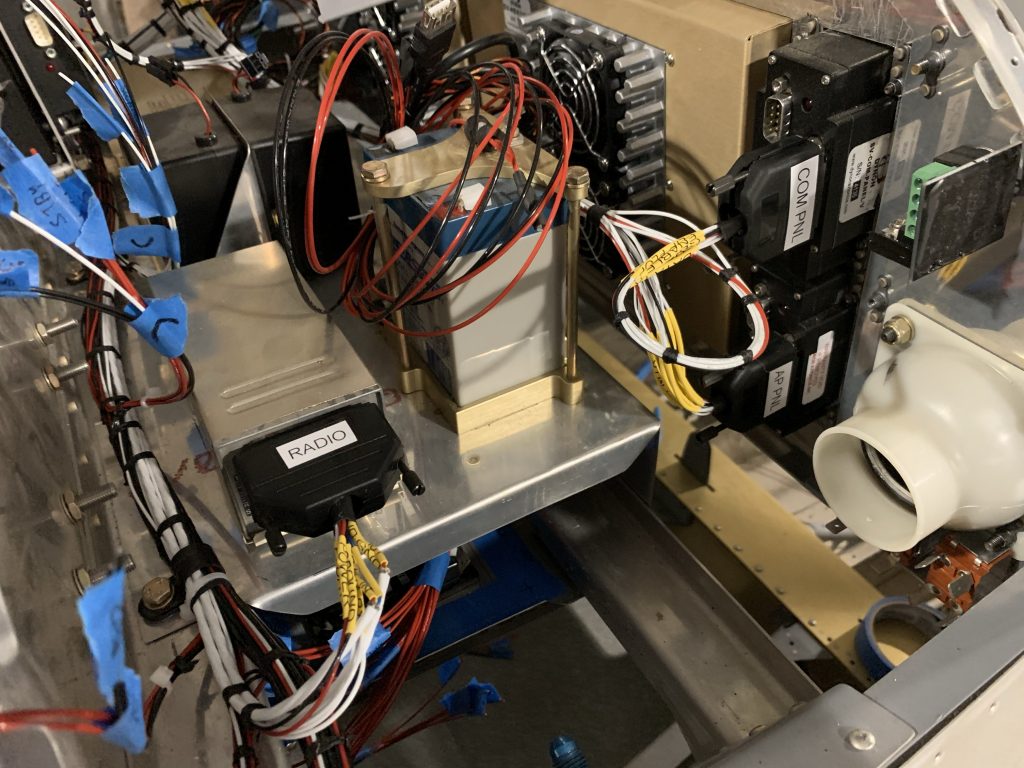 I guess tomorrow I’ll see about that bundle that bamboozled me earlier. I figure my next general move should be to verify that the harness stuff at the aft avionics shelf also reaches without issue. Everything else should be relatively straightforward outside of that.

Also, I’m going to rework the conduit runs back under the baggage compartment. I attached the conduit ends with these little zip-tie pads, using 3M VHB tape. For reasons I don’t understand, these pads have stuck just fine in the forward spots, but at the aft ends they’ve come off multiple times. So I think I’m going to see about pop-riveting the zip tie pads to the baggage ribs instead; they have little holes that ought to work for this. That’ll be something I want to fix before pulling the harness through the conduit.