Yeah, I got tired of trying to keep track of what part of harness stuff I was on. Besides, some better variety in these post titles will make it easier if I ever need to go back and refer to anything here.

I picked up this morning with the com radio connector; not super complicated, but it did call for a few window splices (doubled power/ground inputs, plus a combined phone/mic/PTT ground). All in all, though, a pretty uncrowded connector. But that just left me with the granddaddy of them all: the EMS sensor connector.

Even the pile of heat shrink labels I printed for this thing looks impressive: 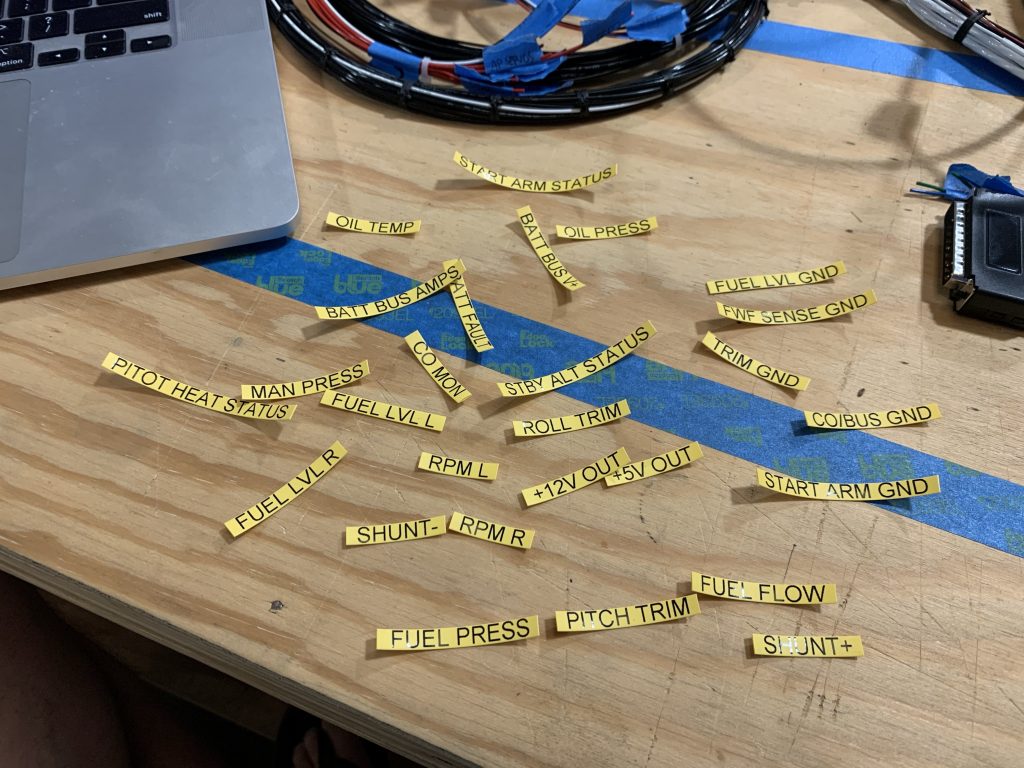 It was really fun trying to go through all 30 or so wires in this bundle and making really sure I was getting the labels right. The one nice thing is that these were almost entirely one wire-one pin; the only exceptions were the power and ground lines for the trim servo indicators. For the former, I window spliced them into the +5V out wire (which will go FWF for sensors up there), while the latter I was able to just twist the striped ends together and combine into a single pin, since the trim wires are pretty small.

Then it was time to pin everything up, again being really careful and triple-checking each pin before inserting it into the connector. Yeah, that’s a lot of stuff: 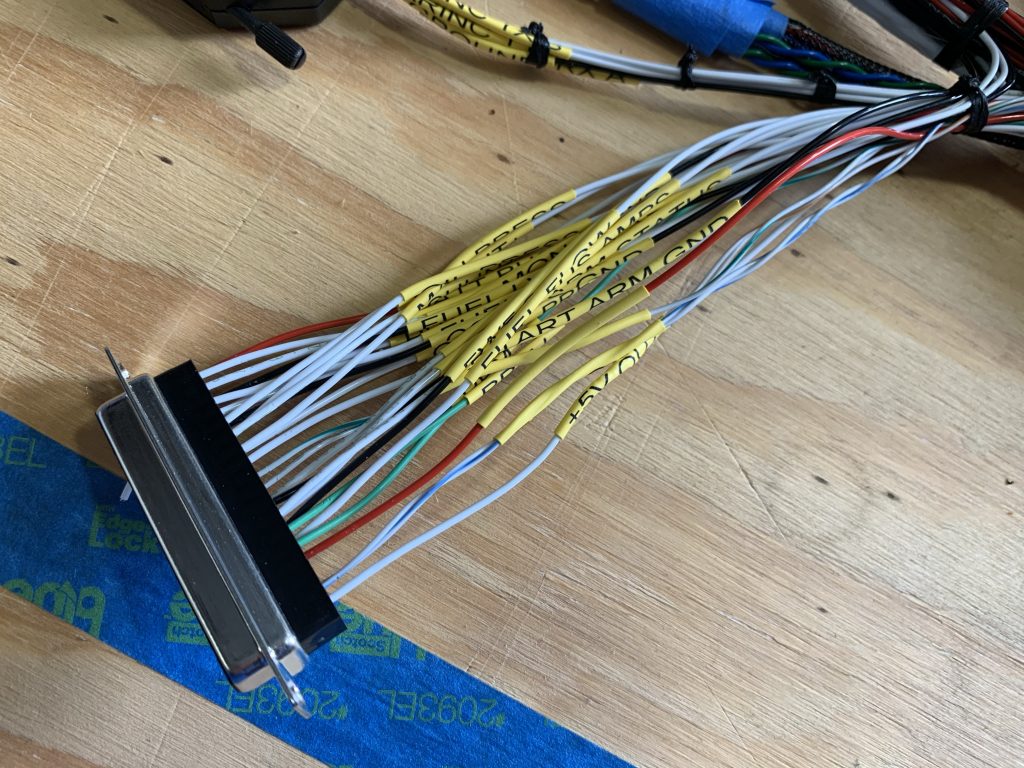 After that, I just did two more fairly simple connectors. One was the Skyview network cable that will connect the forward and aft network hubs; the other was the partial Skyview network cable for the autopilot roll servo. The autopilot servos use the same data pairs as the regular Skyview network cables, but with a single higher-current power/ground pair and a disconnect line. The latter three wires are run totally independently, but the network data lines I want to tap into the hub with everything else.

Finally, I got out the second EMS connector – which contains nothing but thermocouple lines for FWF stuff – and laid that out alongside the connector I’d already done, with the actual EMS unit. That allowed me to lay the thermocouple lines along the rest of the harness and get the relevant sections zip-tied together, so they’re secured temporarily. Then, by taking the existing FWF bundle and adding the CPI2 harnesses (which will have to be inserted from the FWF side later on), I verified that a 3/4” hole in the gear tower and firewall would be sufficient to pass this bundle.

That last part was important because I still needed a hole in the forward side of the right gear tower, for this bundle to go through, and I needed it done before I stuffed the harness into the fuselage. This was where I transitioned to preparing the fuselage to receive the harness. In addition to drilling that 3/4” hole in the gear tower and adding a snap bushing, I also added protection on the larger holes that wires needed to pass through.

At the tops of the gear towers, I took some of my surplus nylon pitot tubing, split it down one side, and slipped it in place around the edge of the hole. It doesn’t look amazing or anything, but it gets the job done: 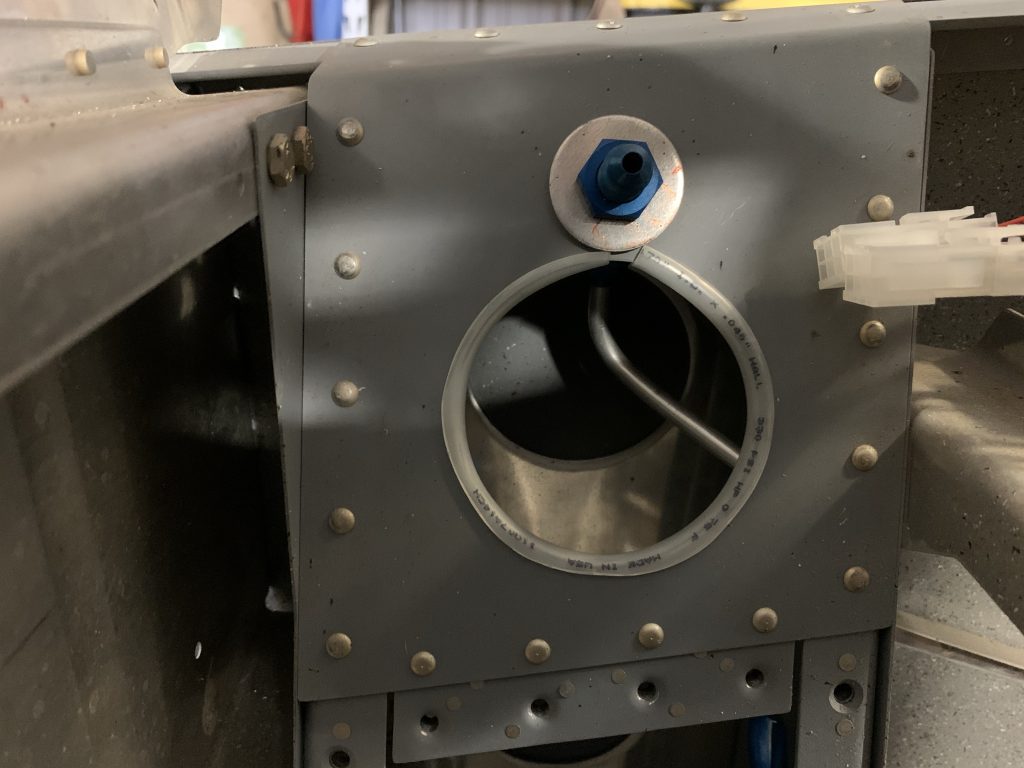 And finally, there was nothing left but to start trying to put the harness into the fuselage. This is a pretty awkward operation; the main thrust of it is feeding the entire harness down through the right gear tower and out the lower exit to the rear. Since there are a couple harness branches to deal with here, it’s just sort of a cumbersome case of feeding in a little, fiddling with the far end, pulling slack, feeding a bit more, and so on.

I got the harness fed in about as far as I think it needs to go, which allowed me to get both the switch console and FWF branches through their respective holes. The next step is to get this thing fed through the spar center section, but I decided that was a job for another day. I’ve had enough wrangling this thing for one night, I think.