So I picked up today with the shield ground bus I mentioned yesterday. I already had my idea of making a bus out of some thick aluminum stock, but the one thing I couldn’t work out to my satisfaction was how to secure that bus. My preference was to secure it to the D-sub connector somehow, so that it wouldn’t potentially be another thing to disconnect when pulling the panel.

One thought I had was to glue it to the backshell, but that presented a couple issues: first, if I ever had to open up the backshell for maintenance, the bus would probably get in the way. Second, I’d have to make sure none of the screws attaching the ring terminals were long enough to go through the bar stock, while also making sure they had enough thread engagement to hold. Doesn’t seem like much fun. Finally, just before bed last night, I had an idea. What if I used two pieces of stock and two screws to clamp the bus on the connector, and used those same screws to attach the ring terminals? It seemed both doable and elegant.

So that was this morning’s fabrication job. It’s pretty straightforward; two pieces of 1/8” stock just a bit longer than the backshell is wide. Both pieces have two screw holes drilled in assembly so they line up. The real fun is that one piece has small holes that are drilled and tapped for the #6 screws, while the other one has larger holes for the screws to just pass through. So the attach procedure is to to thread the screws through the tapped pice to secure the terminals, and then the other piece slips over the long screws and clamps in place with nuts.

Here’s the first mock-up of the thing: 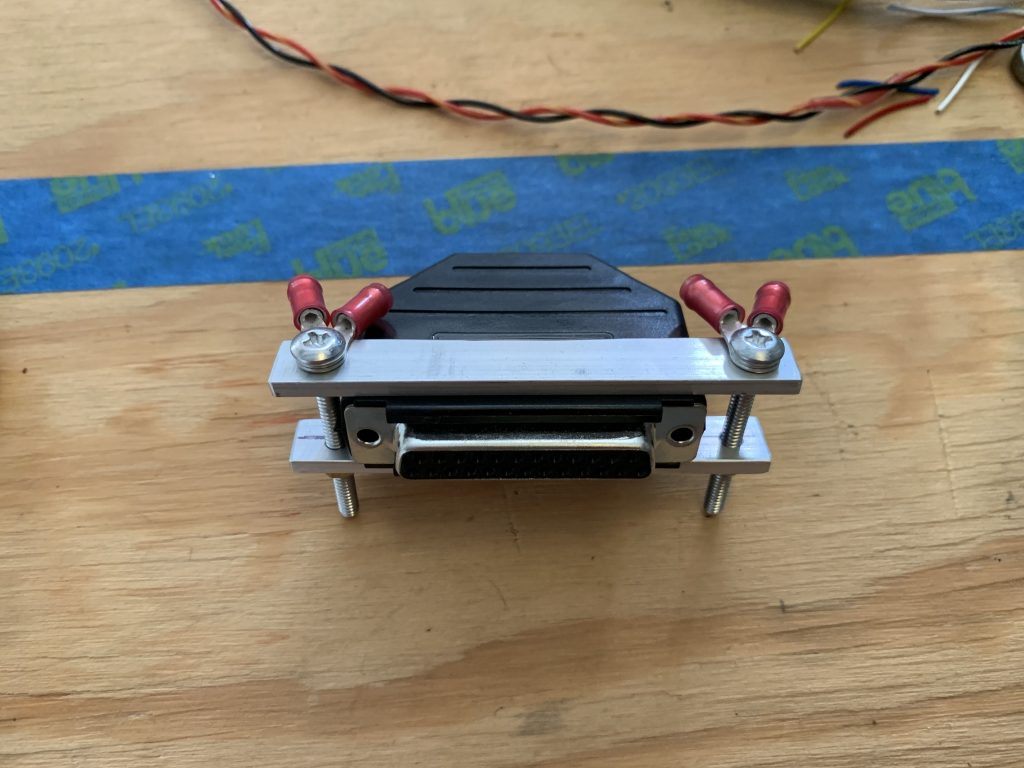 Alright then, time to finish up the terminations and get this connector put together. This one requires some attention, because it’s not by any means a case where I just put a pin on each wire and then install them in a connector. Nope, several grounds in the shielded bundles go to the shared shield ground, a couple of other mic grounds get tied together, and so on. And the end result is a really fat bundle that barely fits in the backshell strain-relief clamp.

Also, as if that wasn’t enough, about the time I finally got the thing buttoned up, I realized that I’d completely forgotten to add the audio input from the SDS CPI2. The good news there is that I heard back from them and my TS connector should work well. That still meant I had to open the whole thing back up and not only add another pin, but tie in yet another ground to the ground bus.

But the thing is finally done. Before assembling it again, I wrapped both parts of the bus with silicon tape. The idea is to help this grip the backshell better without putting a ton of clamping force on it, which probably wouldn’t be good for the connector.

The connector with the bus and ground leads installed: 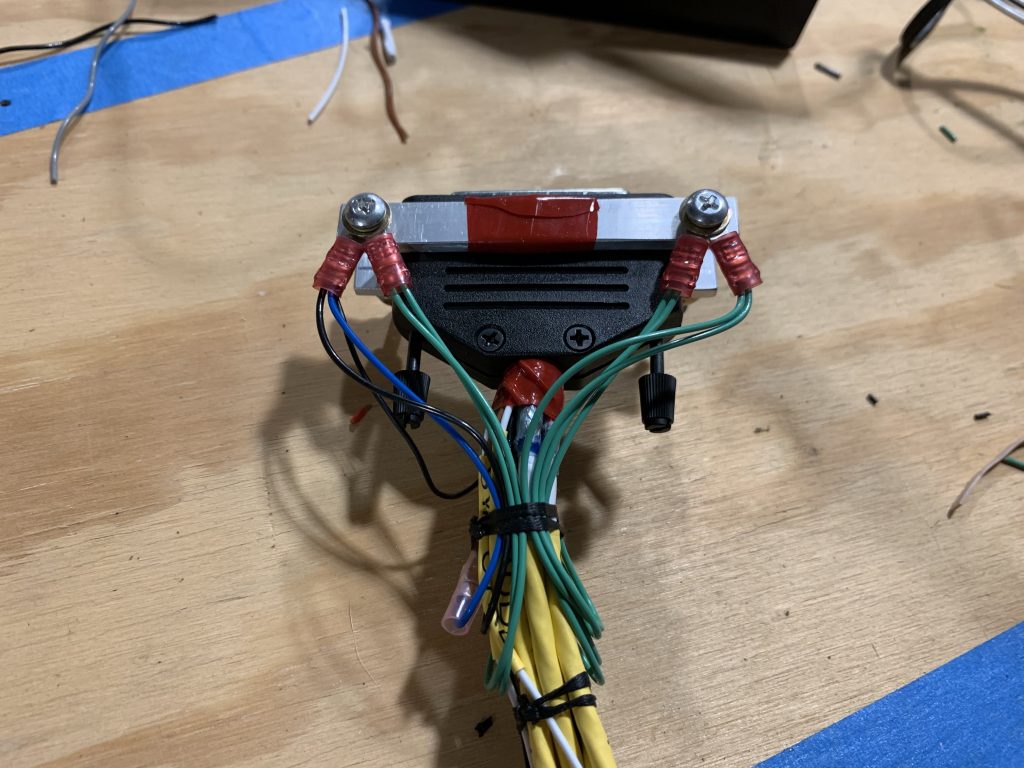 And a view from the connector side. I want to get some shorter screws from Spruce here, so they don’t stick out quite so far, but for now this gets the job done: 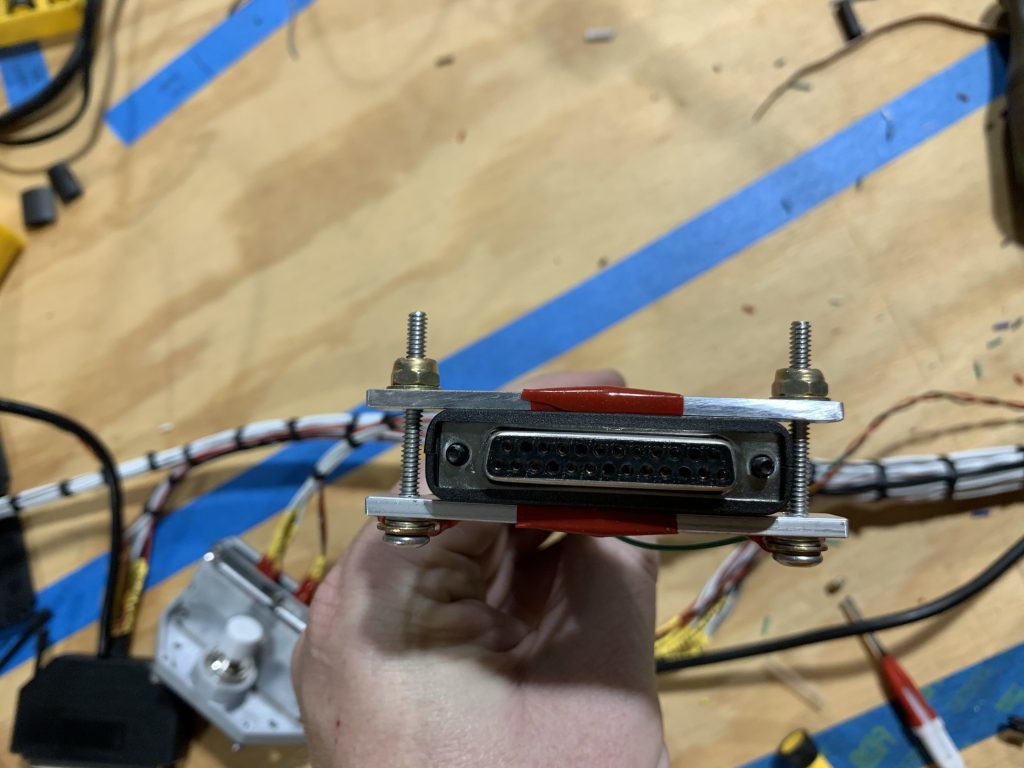 The intercom connector means that I’m finished with the service-loop branch that goes to all the stuff in the center panel. Next up are terminations on the branch serving the upper avionics shelf. After the fun of the intercom, I took the easy one first here, the ARINC-429 interface box; this is the device that allows the TSO’d Garmin GPS to talk to the Dynon displays, so I can get guidance from the IFR navigator on the big screens. This connector is super simple, just six wires (strangely, in a 25-pin connector).

I considered moving on to the com radio connector, but for that I need to do more splicing of a couple leads together, and I didn’t feel like starting that tonight. That’s a job for tomorrow. And when that’s done, I get to go to the real fun, which will be the crammed-full EMS connector.