Harness board layout and beginning assembly

First order of business today was making a first pass at fine-tuning my schematics. I had a few small items not depicted that needed to be added; not strictly necessary to start wiring, especially since most of these items were kind of self-evident, but I’m really making an effort to be exhaustive with my planning here. I also wanted to get to identifying where each ground would actually go, but by the time I finished the detail work I was kind of tired of messing with the schematics, so I put the laptop aside and went to work out in the shop.

The main task of the day was obvious: I’ve got a not-at-all-to-scale line drawing of the harness, which needed to be turned into a full-size layout on my work table, using strips of blue masking tape for the wire paths. This will be the template of sorts upon which I’ll build the harness. Putting this together was just numerous hours of looking at my whiteboard diagram, staring at the table and trying to visualize how to lay everything out so there’d be no interference, and then just adding one strip of tape after another.

All in all, it took several hours to get what you see here, which is the completed layout of the harness. In an extremely broad sense, the tape line winds from the lower right (stuff in the tail), up to the upper right (representing where the harness will reach the rear avionics shelf), the proceeding down and slightly right to where it joins all the stuff under the seat floors (like the wing connections), then over to the right where the fun really begins with all the stuff behind the panel.

Also, just to ensure there’s proper scale here, remember that this table top is a full 4×8 sheet of plywood. Even taking this photo was kind of a challenge, involving standing on a stool and holding my phone as high as I could: 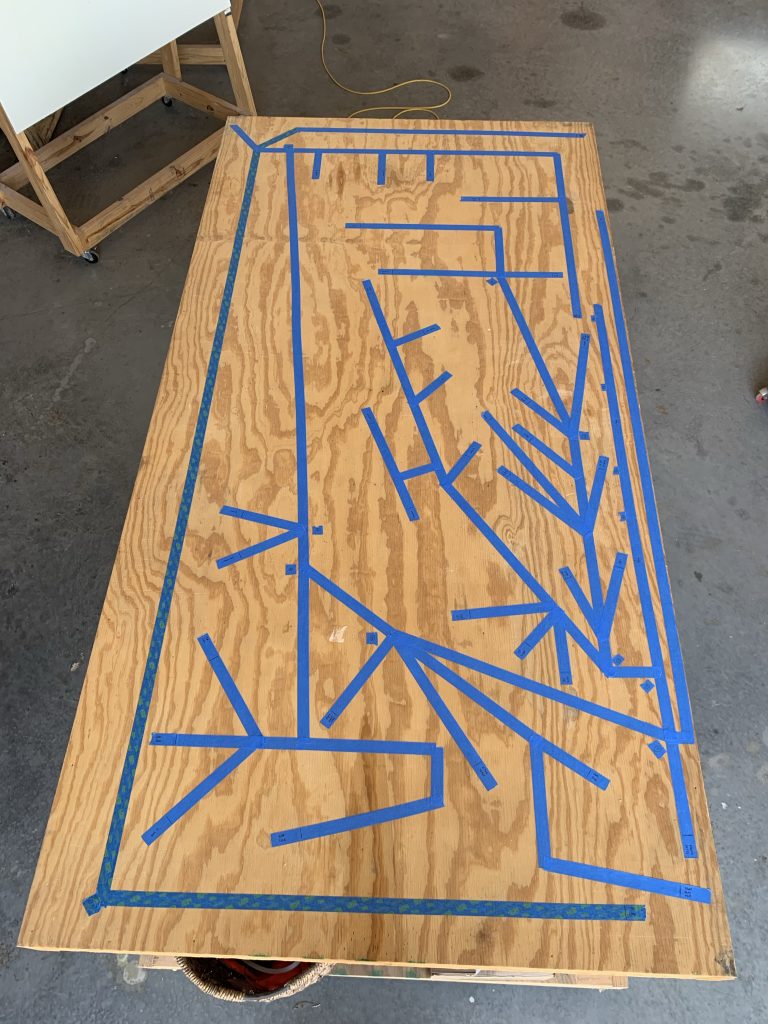 This didn’t quite complete the harness buck, though. Next up was adding nails at all the junction points, which is how the wires will be held in place as they’re wound along their paths. For this, I used some small finishing nails; as we’ll find out later, this was a poor choice. But i didn’t know it at the time, I just wanted to start stringing some wires.

Now, one thing that will make this harness fun is that I’m not building all this stuff up from scratch. Most notably, the harnesses for the CPI2 ignition are prefabricated, so they’ll have to be laid in amongst the other stuff, which might be fun. What makes this even more fun is that all the CPI harnesses are terminated at the engine end, so whenever this stuff is finalized, I’ll have to connect stuff forward of the firewall, and then work out the final wire lengths from there back into the fuselage. But that’s a ways down the road.

The point of all this is that the first thing I tried to do was lay in the CPI2 harnesses. I didn’t really expect them to stay permanently, but I did want to visualize how things would match up, and also validate that my rough-out of firewall-forward wire lengths was reasonable. Unlike all the other stuff here, I don’t know where FWF stuff will terminate, so I’ll just be leaving a ton of extra wire to be trimmed to final length later on.

The point of all this is that even just laying in those CPI2 harnesses, I had wires jumping off my little finishing nails. Obviously these were woefully inadequate. So after removing the CPI2 harnesses and packing them away again, I yanked out all those finishing nails and replaced them with some much larger cousins.

After staring at everything for a while, I concluded that there wasn’t much left to do but actually start laying in wires. I decided that my rough strategy here would be to 1) try to lay in the longest wire runs first and 2) work from the rear of the plane forward, so I could keep track of my work by labeling each termination as complete. That seems a lot better than trying to individually mark off each wire as I run it.

I didn’t really end up doing a ton here, because I kept running into questions to answer. Maybe the biggest oopsie was when I ran the 18-ga shielded bundle from the tail to the nav/strobe controller – after I’d cut it to length, I looked at the remaining bundle and thought it looked way to short to still be able to route from the strobe board out to both wingtips, and that was a good hunch. Apparently when I ordered this stuff I only accounted for the wing runs, and forgot about the tail light. Thing is, the tail light doesn’t even need three conductors (like the bundle I’d laid in), just two. The good news is that I quickly found a source for two-conductor shield bundle, which I’ll use for the tail light, and that original bundle will still be usable for my wingtip light runs.

In the end, I just laid out the pitch trim cable, cables from the rear-seat headset jacks, and connections from the ELT to the panel. I think things will begin to speed up from here; for one thing, I’m getting more confident in pulling and cutting wires (this is essentially confidence in my planning), and I’ve also worked out some other details, like labeling the ends of each wire temporarily with blue tape.

And while it’s not a lot, it’s still cool to see the beginnings of a harness start to take shape: 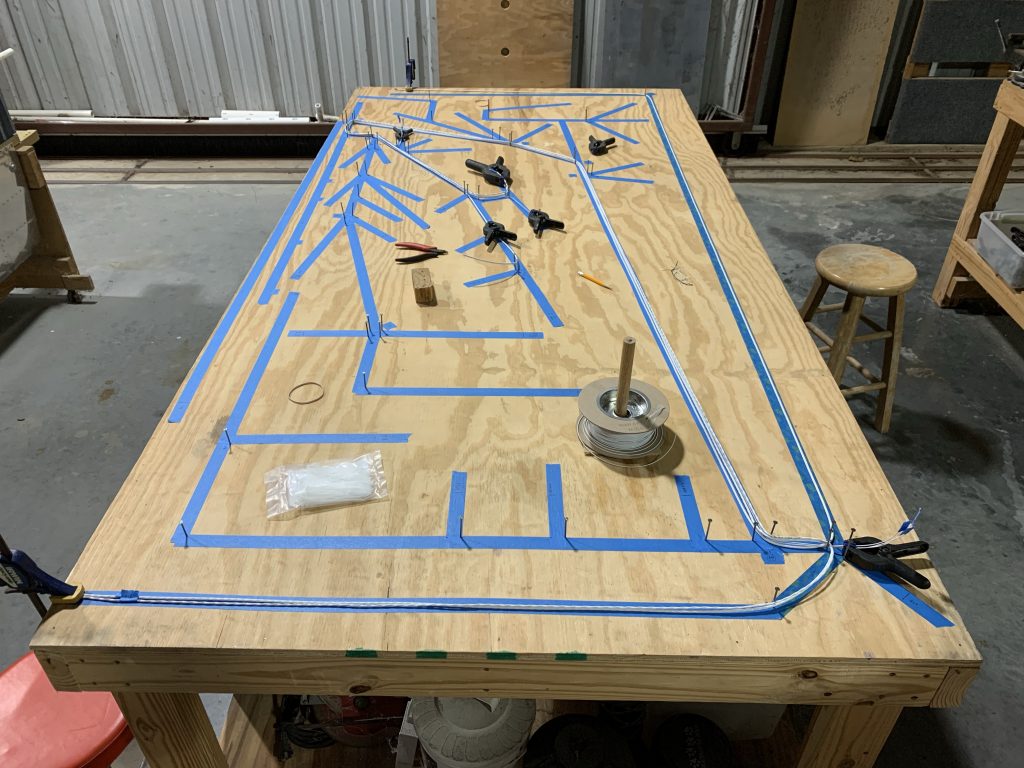 Instead of laying any more wire in tonight, I’m going back to my schematics to nail down those ground locations – that’s one of the things I need to get nailed down so I can continue, because some of the long runs from the tail I want to make next are ground runs.

I’m feeling really good about this stuff right now, though. Way back when I was first working out schematics, I was looking forward to doing the wiring, but kind of wondered if I’d still feel that way when I got into it. It’s still early yet, but I’m actively enjoying myself so far. Over the past few days I’ve been keeping my expectations low, thinking that maybe I could make some good progress on the wiring during my vacation, but after today I think I have a fighting chance of having this harness in the plane before I go back to work…which would be quite a victory indeed.