Another solid day’s work, and good progress in spite of a couple roadblocks. I was in a good place to get rolling (after a morning appointment) because I took the time last night to go through the schematics with a fine-tooth comb. I got all the grounds depicted properly, and corrected a few other items as well.

I decided my first order of business would be to run the power and ground wires to the rear-seat charge port. Doing this would allow me to close out that particular branch, and I’m going with a strategy of trying to close branches out whenever possible. I figure the fewer incomplete branches I have, the less chance there will be that I’ll mess something up or forget a wire.

This ended up being a rocky start to the day. The power and ground runs to the charge ports are 18ga, and while the power run was fine, by the time I finished the ground run…I’d used the majority of the 18ga black wire I had on hand. This was pretty obviously a problem; what I had left would be barely enough for the other charge port’s ground and the short airframe grounds out in the wingtips. I knew good and well I had more circuits that merited 18ga grounds, and a review of the schematic proved that out.

Even more annoying, the very next branch I was going to work on – the runs to the flap motor – also need 18ga wire. So this problem was directly affecting me almost immediately. I started to go ahead and place another wire order, but pretty quickly imagined myself just ending up making an order per day for the rest of the week and paying out the nose for repeated shipping costs. So I decided to pause for a bit, take inventory of the wire I had on hand, and work out more precise estimates of what I needed.

Basically, I just wanted to see that what I had on hand was generally well in excess of what I estimated that I needed. I’m sure I didn’t catch every single run in this really hurried estimate, so ample breathing room was what I wanted. In the end, I found I was OK on everything except 22ga black…where my usage estimate exactly matched my inventory. Yup, that ain’t gonna work. So I placed an order for the 18 and 22ga wire, and after thinking it over for a couple minutes, I went ahead and sprung for next-day shipping. I really want to stay productive during this vacation time, and I’d rather drop an extra $10 or so on shipping to that end.

With that minor crisis handled, it was time to see what I could do next. The flap runs are pretty straightforward, so I decided it’d be OK to move on to the other stuff on the aft avionics shelf. In the course of this, I worked out some more work habits to use to help me stay organized; first up was clearly marking any branch that was complete. For this, I just made another tape flag with a big “C” on it and wrapped it around the entire bundle. I also removed the spring clamps that had been holding that branch, and taped the bundle down. Since these clamps are in kind of short supply, being able to “recycle” them is pretty important.

An example of a closed-out branch (in this case, for the ELT): 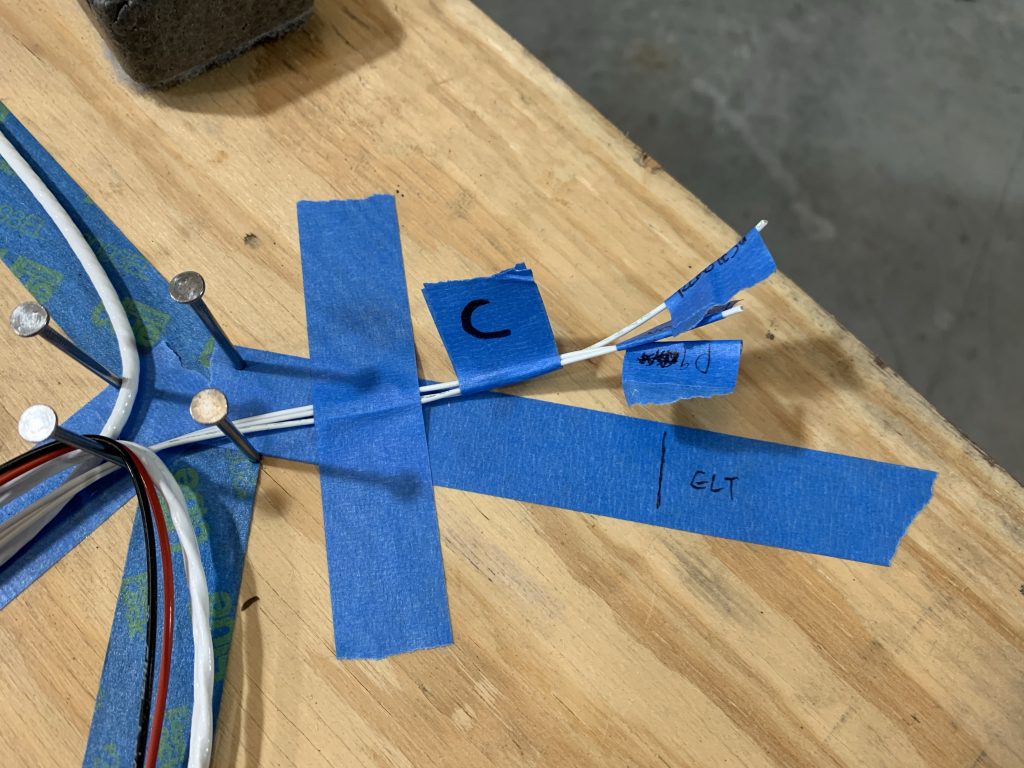 The next fun items were the transponder and ADS-B receiver. In addition to power and ground runs, these both have serial data connections to the HDX displays – something I hadn’t had to work with yet. Making these more fun is that these serial connections need to be shared by both displays, so instead of a simple point-to-point run, I needed to work in splits near the displays. To do this, I got to teach myself how to do window splices, something I’d be pretty good at by the end of the day. This is just where a small piece of insulation is removed from the main wire, and the stripped end of a second wire is wrapped around it, soldered, and finished with heat shrink: 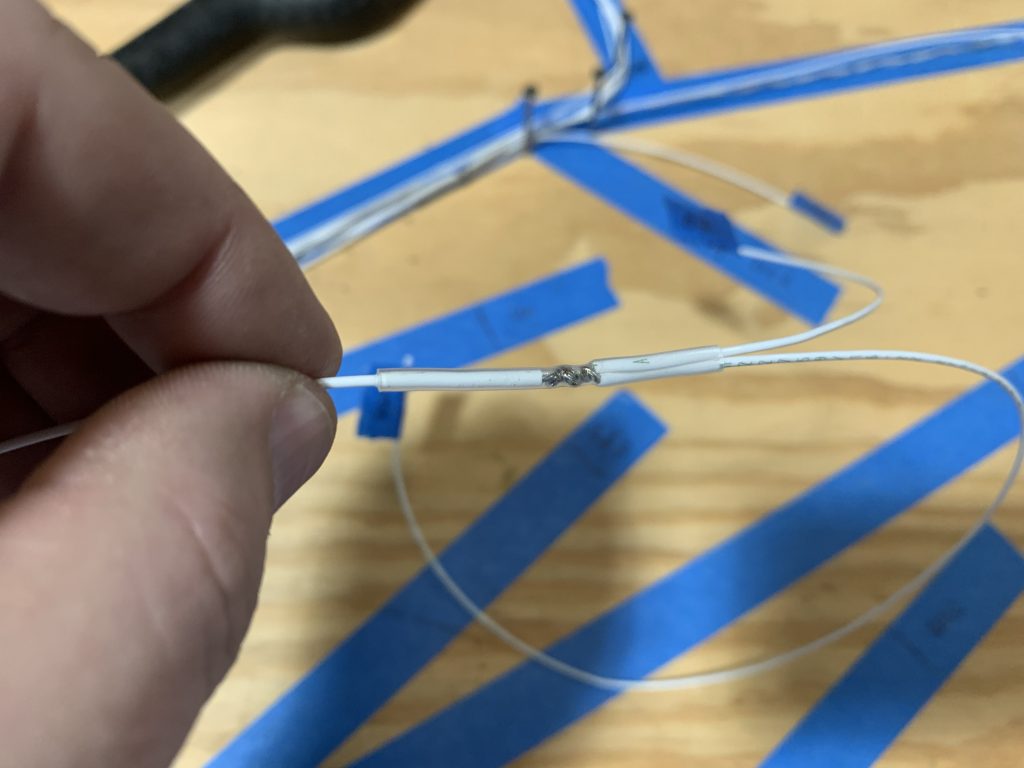 So now that transponder and ADS-B branches are closed out, and I’ve also gone ahead and run the power/ground/disconnect wires for the pitch servo (and also added window-spliced branches for the roll servo while I was at it). This makes the tail section of the harness pretty much done; the one thing I can work on right now is the network cable to connect the front and rear hubs, but other than that I’m waiting on the wire orders for the flap and tail light runs.

So now I’ve got a little more color diversity to the harness: 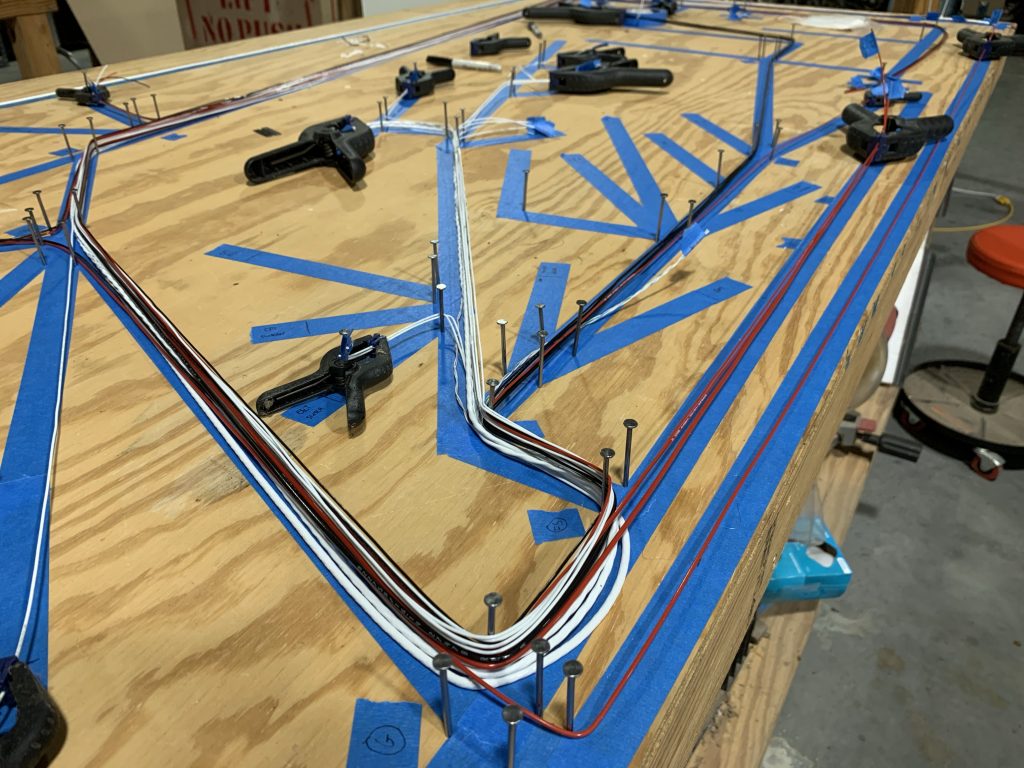 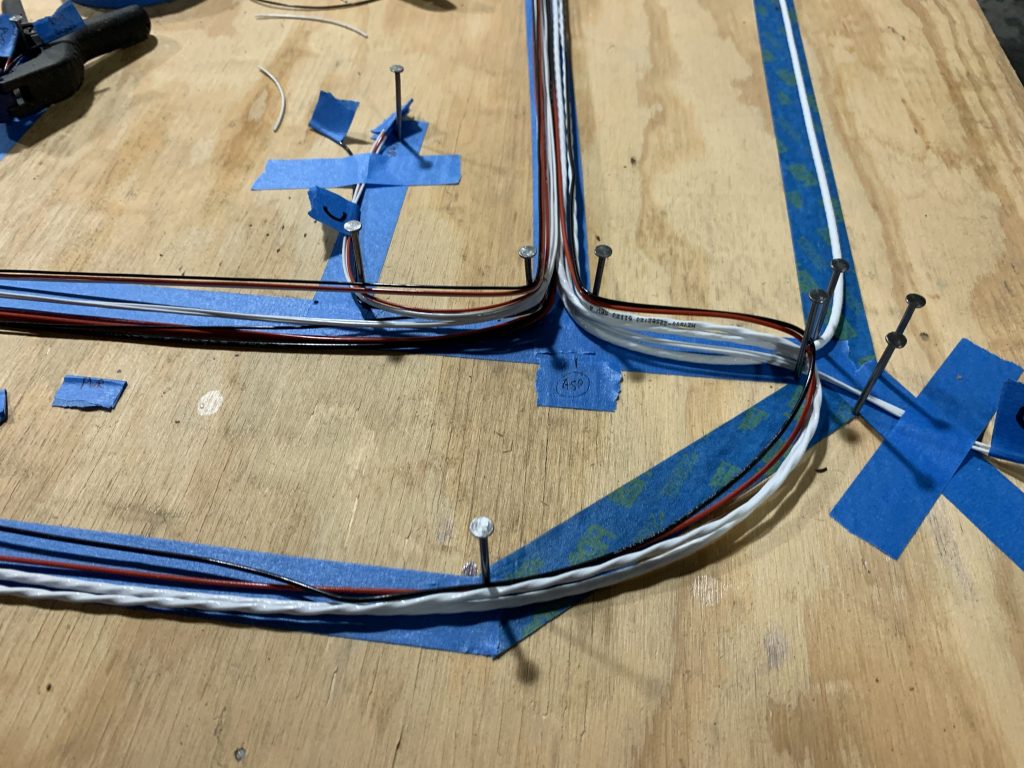 I’ve already been thinking a bit about how to move forward tomorrow even before the wire orders (hopefully) come in, and it looks like I can reasonably start working on some of the mid-cabin stuff – the remainder of the wing stubs, beginning the stick function wiring, front seat heat/headset jacks/charge ports, and so on. So while I’d really like to wrap up those tail runs, I’ve got plenty of room to keep going. It may be a bit optimistic – I’ve still got the complex behind-the-panel interconnects remaining – but I may even have all the wires laid out this weekend. It’d be really great to start temporarily building this stuff up and be ready to try stuffing it into the fuselage next week. Will that happen? I dunno, but hey, even if it doesn’t, I’m already feeling great about the progress so far this week.