This was a longer day than the hour count suggests; while I didn’t put it down as shop time, I spent several hours this morning running several parts orders. Some connectors and wiring supplies, both the charge ports I’m going to use, plus some other goodies like wiring tools and a 30A 12V power supply. Right now I only have a 10A supply, and I’m looking towards the time when I’ll want to power up a fair amount of the avionics at once, and 30 amps should do the trick nicely.

As far as shop stuff, I started out by ripping out all the fun stuff I installed yesterday. Seats are back in their box, floors and flap stuff are back on the shelves, and so on. Then I wanted to get the CO monitor box mounted on the baggage bulkhead. The spot I was intended worked out nicely, so I just had to drill a couple holes. Even better, I had enough spare hardware from previous work so I could mount this immediately without having to wait for anything: 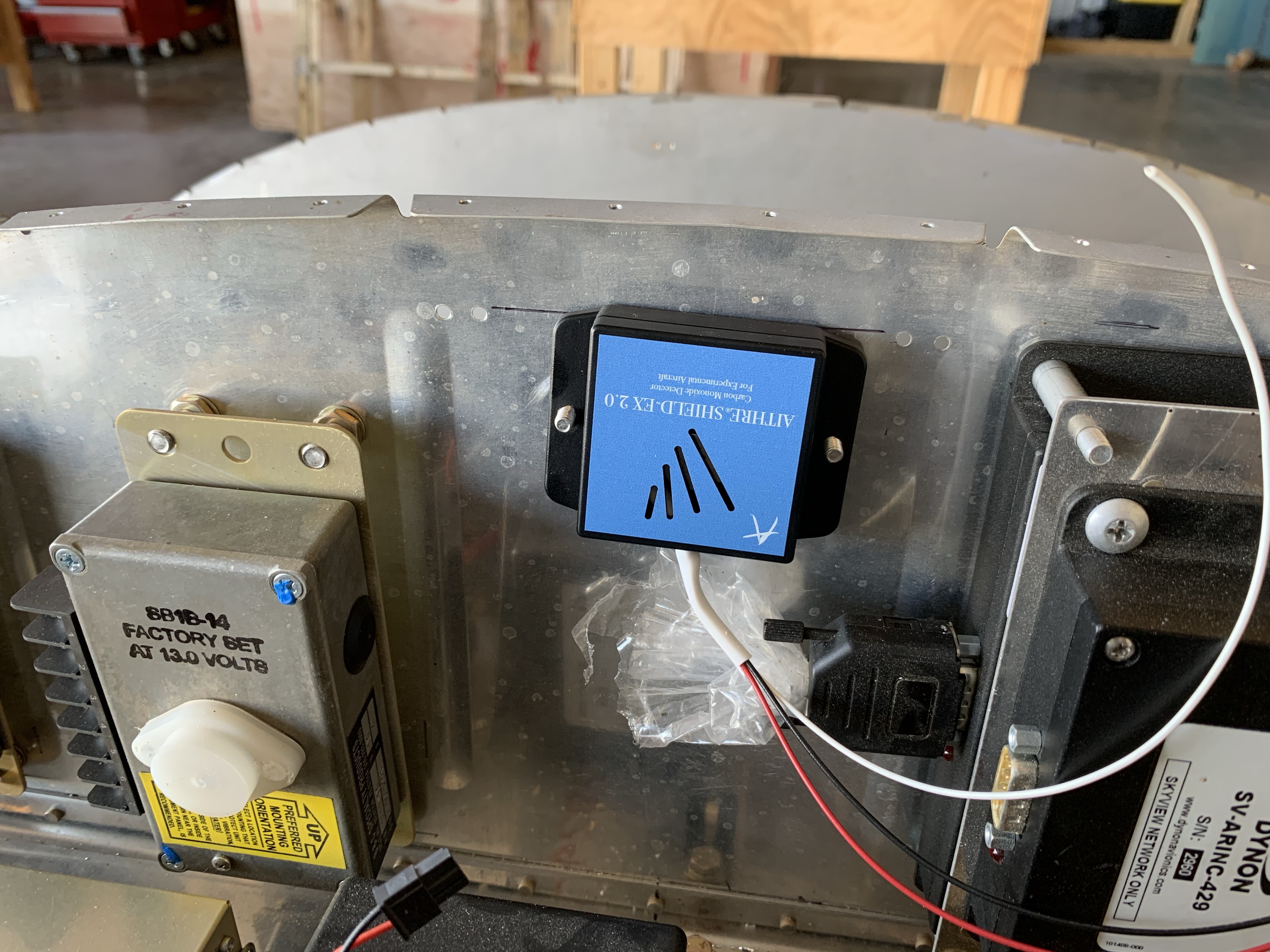 And then it was time to get down and dirty with harness planning. The overall intent was to take the line drawing I did a while back and 1) refine all the despited branches and groupings and 2) give each branch an actual length so it could be turned into a harness. The general idea for doing this was to run ribbon through the aircraft and use that to simulate wiring runs. I started by just running a single long ribbon along the longest continuous harness path – that is, starting back at the tail, going under the baggage compartment and seat floors, up the right gear tower, across behind the panel, back down the left gear tower, and to the firewall.

The original plan was to then add individual ribbon runs for various branches, but I decided that was overkill. Using that long run as a baseline, I marked up all the major junction points, and then made individual measurements along branches and to components and wrote those down. By using a tailor’s measuring tape, I could pretty well simulate curved paths branches might take. And at the end of the day, none of these branches need to be millimeter-precise or anything. While I’ll probably assemble the bulk of the harness on the table, I don’t intend to do any actual terminations to complex lacing until the whole setup is installed in the plane. So when measuring branches, I was just conservative with my lengths, with the expectation that I’ll trim to final length in place in the airplane.

The decision to terminate everything in place comes down to a couple points: first, I don’t really trust that I’ll get every measurement exactly right, no matter how careful I am, especially compared to seeing things in place. Second, since significant portions of this harness will have to be carefully threaded through the fuselage, I think it’s to my advantage to not lace a bunch of stuff up and compromise the flexibility of the thing. It remains to be seen exactly what the results of this decision look like…

Anyway, after a whole lot of marking up my line drawing, it was time to pull the long ribbon out and take my last batch of measurements, between the various junction points I’d marked previously. Kind of impressive to see all ~20’ of ribbon stretched out in a straight line, though I imagine it’ll be even more impressive when there’s a wire bundle this long: 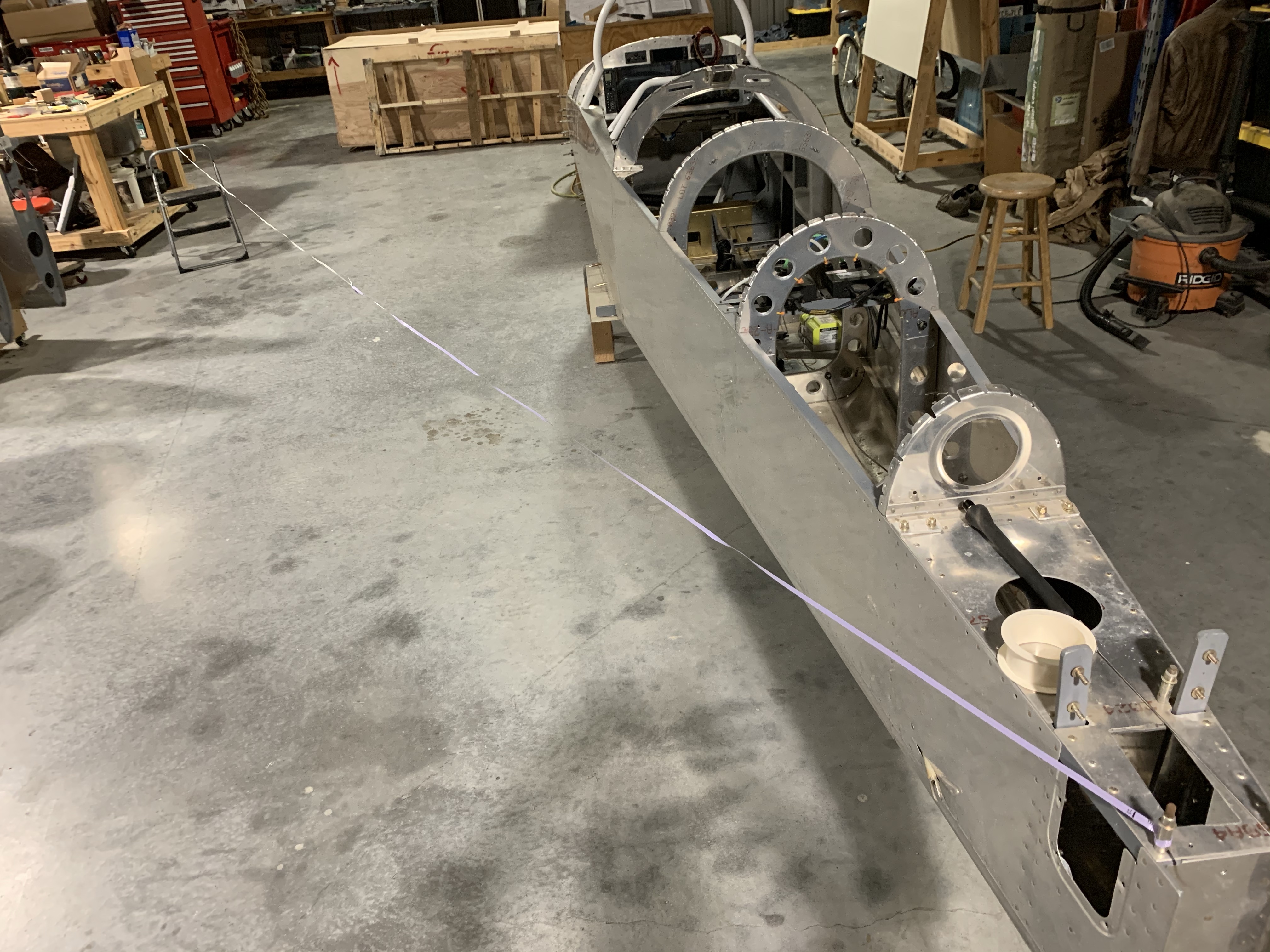 And for the final exhibit, here’s the heavily marked-up harness line drawing, which was the main product of today’s work: 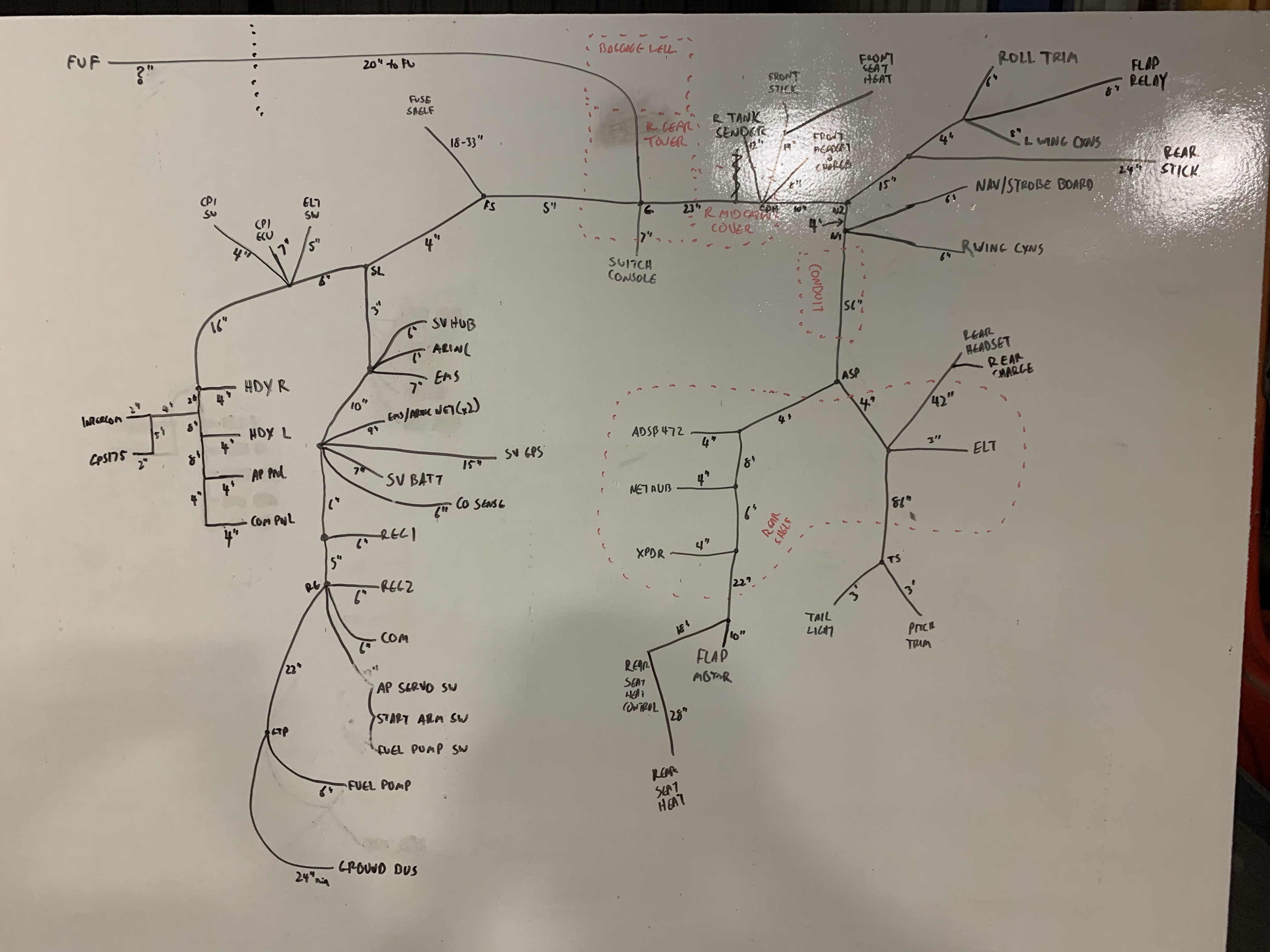 Next up, I get to put together a similar layout on my big work table, which is where I’ll be starting to actually put things together. This is when the fun will really begin. I also need to take a final pass through my schematics, I have a couple punch-list items to address there before I actually start routing wires. I think I also need to make some final decisions on what my grounding scheme for everything will look like. I know I’ve planned to do local grounds out in the wings for the landing and taxi lights, but I think most everything else I’m going to end up taking to a single ground bus on the firewall. I should probably get rigorous with the schematic and give each ground-bus item a discrete tab label so I’m sure I’ve got enough terminals up there.