Now that was a good solid day’s work, which is exactly what I wanted. Since I haven’t taken much in the way of vacation time over the past year or so, I’ve got a ton of time saved up, and with no plans to go anywhere any time soon, I decided to just take myself a two-week staycation. My intent is to go bananas on airplane work, and today was the kickoff day.

The general idea is to get going on these wiring harnesses. I’ve got most of the big ideas in place from previous planning, but there were still some details to work out, and that was my focus today. Overall, the day’s work was kind of all over the place, but that’s honestly my comfort zone when it comes to abstract work like this, sort of taking it all in and working on things as they come to me. Anyway, the main stuff remaining to finalize were locations and/or wiring runs to: both seat heaters, both control sticks, charge ports front and rear, rear headset jacks, and the ELT antenna.

The ELT was the first thing I looked at, figuring it’d be fairly straightforward. My plan has been to mount the antenna on the right rear armrest, with the antenna curving around the bulkhead above the seat. Locating this antenna on an RV-8 is a little interesting; there’s not much in the way of exterior skin space that’s usable. On top of the tail would be a traditional location but the sliding canopy means almost all that area has to be clean. The old 121.5MHz antennas would go well underneath the empennage fairing, but the newer 406MHz antennas are too long.

Anyway, remember how I thought that’d be simple? Well, the antenna seems like it needs to be mounted at an angle to make that work, and I never could settle on how I wanted to do that, and eventually I sort of quietly moved on to something else, namely the seat heaters. Figuring out where to route the harnesses seemed like it really required that I have the heaters installed so I could see where the plugs would sit…so I pulled out the seats and heater pads and got to work.

These pads are kind of cool; they’re trimmable (in one dimension, at least) to fit inside the seat cushions. The pads for the setbacks didn’t need any trimming, but the bottom cushions definitely needed some work; I trimmed those both for length, as well as cutting a slot in each to allow the harness crotch strap to pass through. Here’s one of those pads, marked for cutting, but with me taking a photo and trying to put off the point where I started chopping off parts of these non-cheap (but not stupid expensive, though) pads: 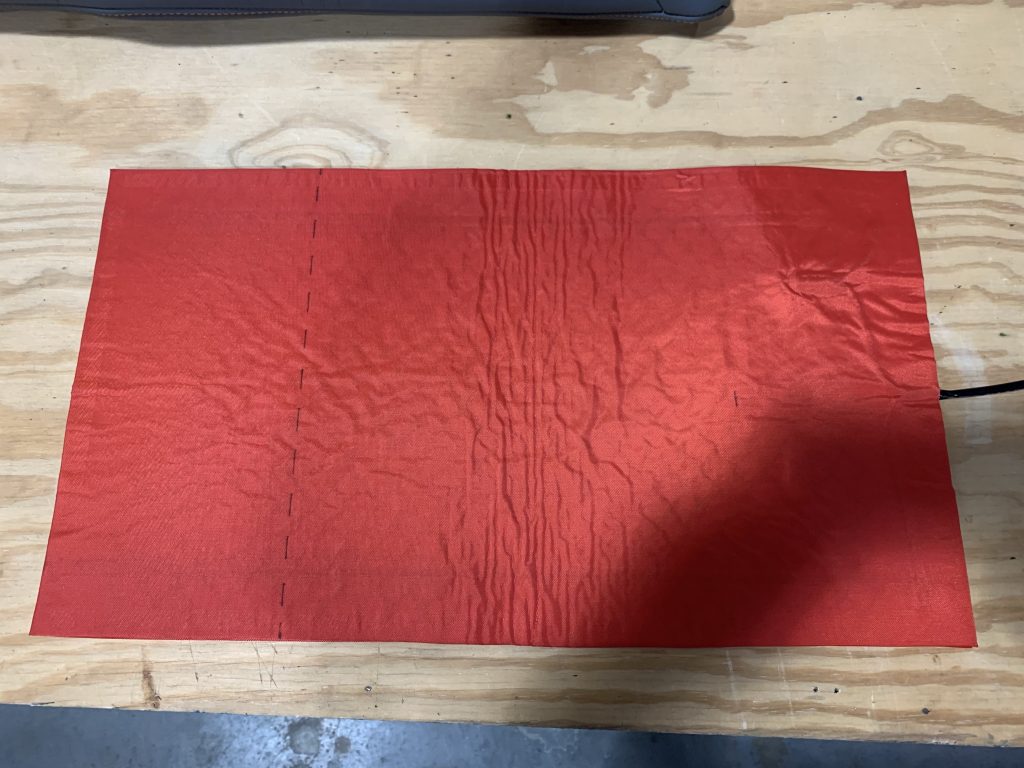 Of course, I wanted to test out the pads as well, so for both the front and rear seats, I laid the cushions out on the workbench, attached the pads to the provided wiring harness, hooked them to my power supply, and cranked the heat. Yup, they get nice and warm. Hey look, another photo! 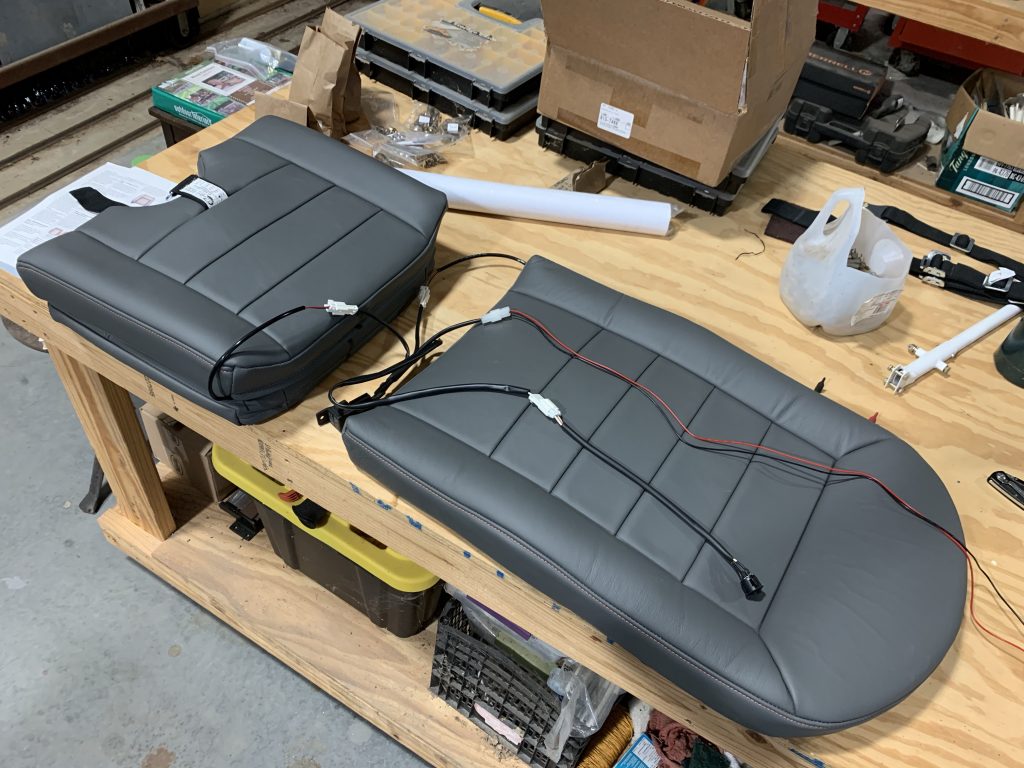 In practice, I’m not going to actually use the harnesses shown above. As provided, the heater system provides a switch with off/low/high positions, and makes use of a bulky relay to do some of the switching. I’m going to be ditching that entire setup and just controlling the heat level using a couple of PWM dimmers. Before I could do that, though, I needed to figure out how the wiring would work, which meant reverse-engineering the heater harnesses. Turns out, at the end of the day, it’s pretty simple: with the switch on low, the two heater pads are connected in series, and with it on high, they’re in parallel. Thus on high they draw about four times the current and get warmer. For my setup, I’ll just be wiring them up in parallel, since I want the highest PWM setting to correspond to maximum heat.

So there…seat cushions with harness pigtails. Next up was a whole lot of installing the seats, moving the pigtails around, scratching my chin, removing a cushion or two, thinking some more, reinstalling, etc. Most of the thinking here revolves not so much around being able to connect stuff, but wanting to keep the harnesses as hidden as possible, while still allowing for serviceability; the seats are going to come out on a semi regular basis, as are some of the covers in the vicinity that are involved. So kind of a lot of thinking forty steps ahead.

That was the main thrust of the day, but just to list some other stuff I was considering:

So while actual work in the shop is done for the night, I’ve got a whole list of research topics, which will probably culminate in some part/component orders. Which sounds like it could be a hangup for wiring progress, but I don’t think it is. All of today’s work was just leading up to pulling ribbon through the fuselage so I can work out all the assorted branch lengths for the harness. With the exception of the charge ports and headset jacks, I’m pretty much at a point to keep going with that.
So, let’s see what tomorrow holds…
Posted in Electrical, Fuselage. Bookmark the permalink. Hours Logged: 7.5