Oh boy, what fun. Today has been super slow going – we started out trying to finish up the forward gear crossmember. Yesterday we did all the rivets in that except for four in the center that attach two nutplates, which in turn are part of the rudder pedal mount system. Those went pretty easy, so we then went to work on the inboard edges of the lower forward skins. Like with the nutplates, these were flush rivets with the flush side inside the cabin, which meant I was sitting inside shooting while Josie was bucking.

Now, the thing people will tell you about shooting solid rivets is that handling the gun is the easy part – mostly all you have to do is hold the thing straight and have the right sense and trigger control to hit rivets for the proper length of time. Bucking, on the other hand, is a bit more of an art. You’ve got to hold the bar so the face on the rivet tail is parallel to the surface, and you’ve got to keep it in that orientation while a high-speed air hammer is beating the crap out of the other side. Getting this right means finding a middle ground between holding the thing with a death grip and letting it use bounce everywhere. Sort of a .38 Special “Hold On Loosely” thing.

Anyway, that’s a long intro for this tedious bit of work. These were only maybe 18 or 20 rivets, but there was a lot of me shooting, then climbing out to examine a shop head, then coaching Josie a bit more on the bucking, and so on. The end results were not the best set of shop heads ever, but none of them were horrible enough to drill out. This is especially true because where these were located, drilling any out without damaging the holes would have been a whole new challenge. Sometimes there’s a real judgment call to be made between a subpar rivet shop head and the potential for damage if you drill it out to replace it.

Side note: lest anyone thing I’m making excuses for poor workmanship, this exact dilemma is called out in the shop manual. In particular, re-shooting after drilling out can often lead to a worse rivet than the first – the hole has likely been enlarged a bit, there’s a bit more slop, and thus more opportunity to cause trouble.

Anyway, after getting through that slog, Josie went for a rest while I got the cooling ramp clecoed in place for later riveting. Some of the attach rivets for this are blind rivets, so I went ahead and got those set. Then I spent some time cleaning the shop before we took the dogs for a pre-sunset walk. We decided to do another riveting session before dinner, and this time we went for the row of rivets on the forward side of the spar carry through. These went mostly well, though I folded over a couple rivets bucking from inside – there are a couple spots with bolt heads on the bulkhead here, and working around those to get the bucking bar in place was really tough, especially considering I had very little freedom of movement.

The real fun came with the outboardmost rivets on this row – the aft end of the lower longeron is in the way, so there’s no way to use a full-size bucking bar. Instead I had to use the small edge of one of my thin tungsten bars. Doing this requires very precise control of the bar, and is pretty error-prone. Even better, I had to get into a different position for this, squeezing my upper body in between the saw horse and the aft upper brace (at the top of the gear towers). This led to yet another “action” shot, this time with Josie just sticking her phone under the cockpit and trying to capture my contortionist adventures: 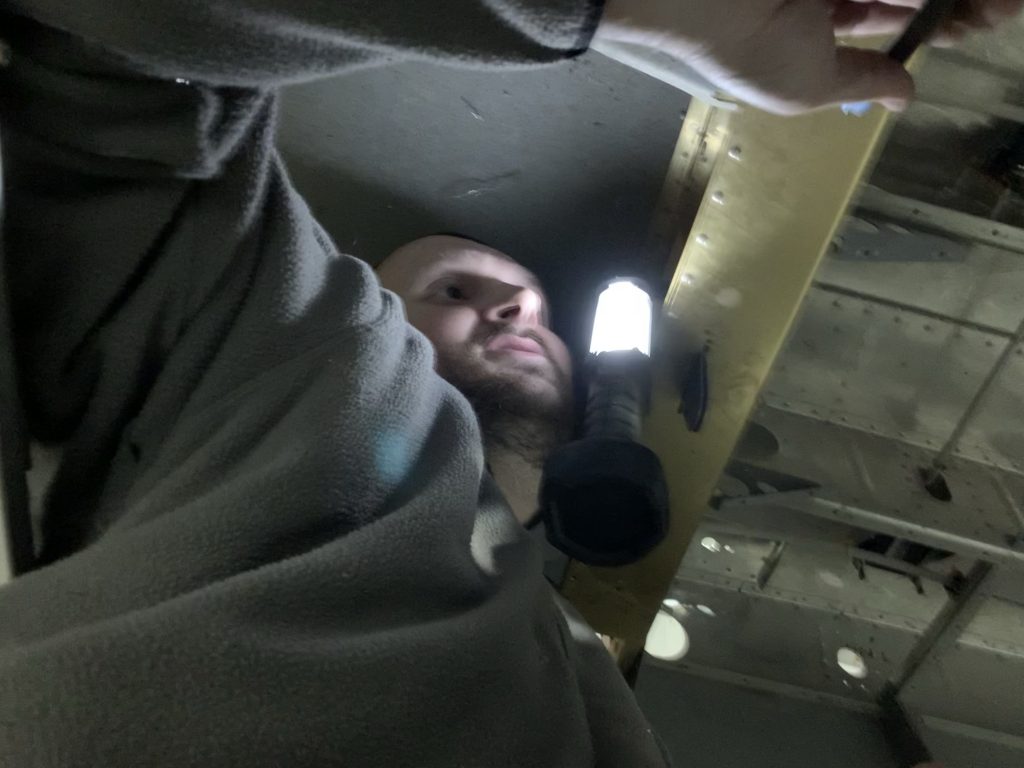 What’s not so obvious from that picture is that my legs are sort of sticking off to the left side. I felt quite a bit like a pretzel. But hey, i got both of the tough rivets bucked with no issues, which let me breath a sigh of relief.

That was where we called it a night. I took a few minutes to drill out the four bad rivets out of that row – we’ll pick back up with those another night. We’re talking about trying to do consistent short evening session this week to finish this stuff up. At first I was a bit frustrated at the rate of progress, but I have to remember that Josie’s not nearly as experienced at this as I am – she’s going to go slower and get a good bit more mentally taxed than I do. As with everything homebuilt, slow and steady wins the race.