So riveting last weekend didn’t happen – Josie wasn’t feeling well on Sunday. And while that kept me from really working during the week, as the riveting is kind of my blocking thing right now, it wasn’t a total loss. You see, Friday I got a nice big box from Cleaveland Tool that contained my seats. I ordered these late last year, and after a fair amount of thought, went with leather seats, but kept the look fairly simple – just plain gray with some orange topstitching. This will match up with my expected exterior paint design, but without being too garish (or requiring that I match, say, orange leather with an exterior color I’m not yet sure about).

Of course, I had to temporarily put the floors in and cram in the seats for some photos. And yes, I climbed in and did a test sit, both in front and back. 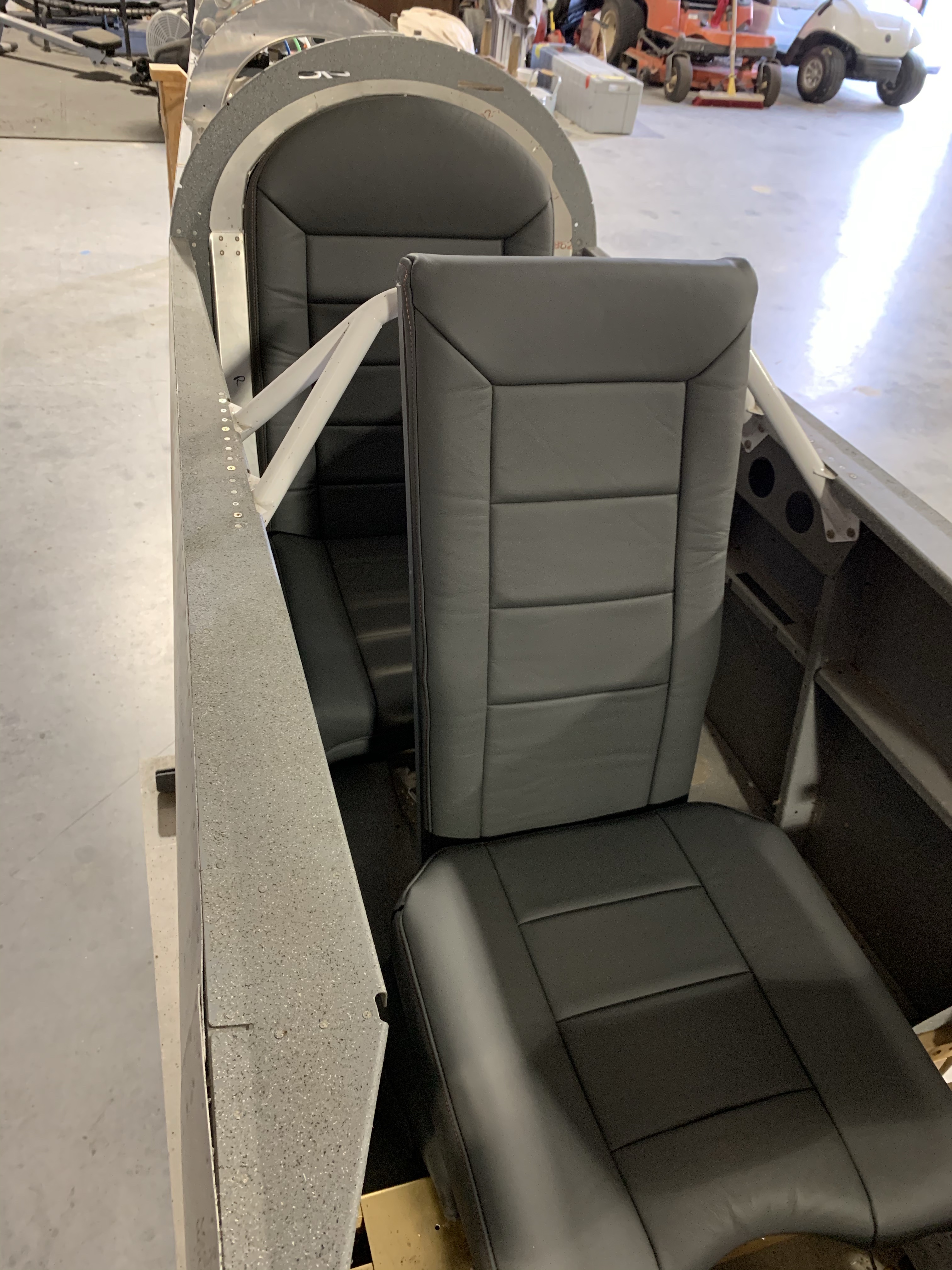 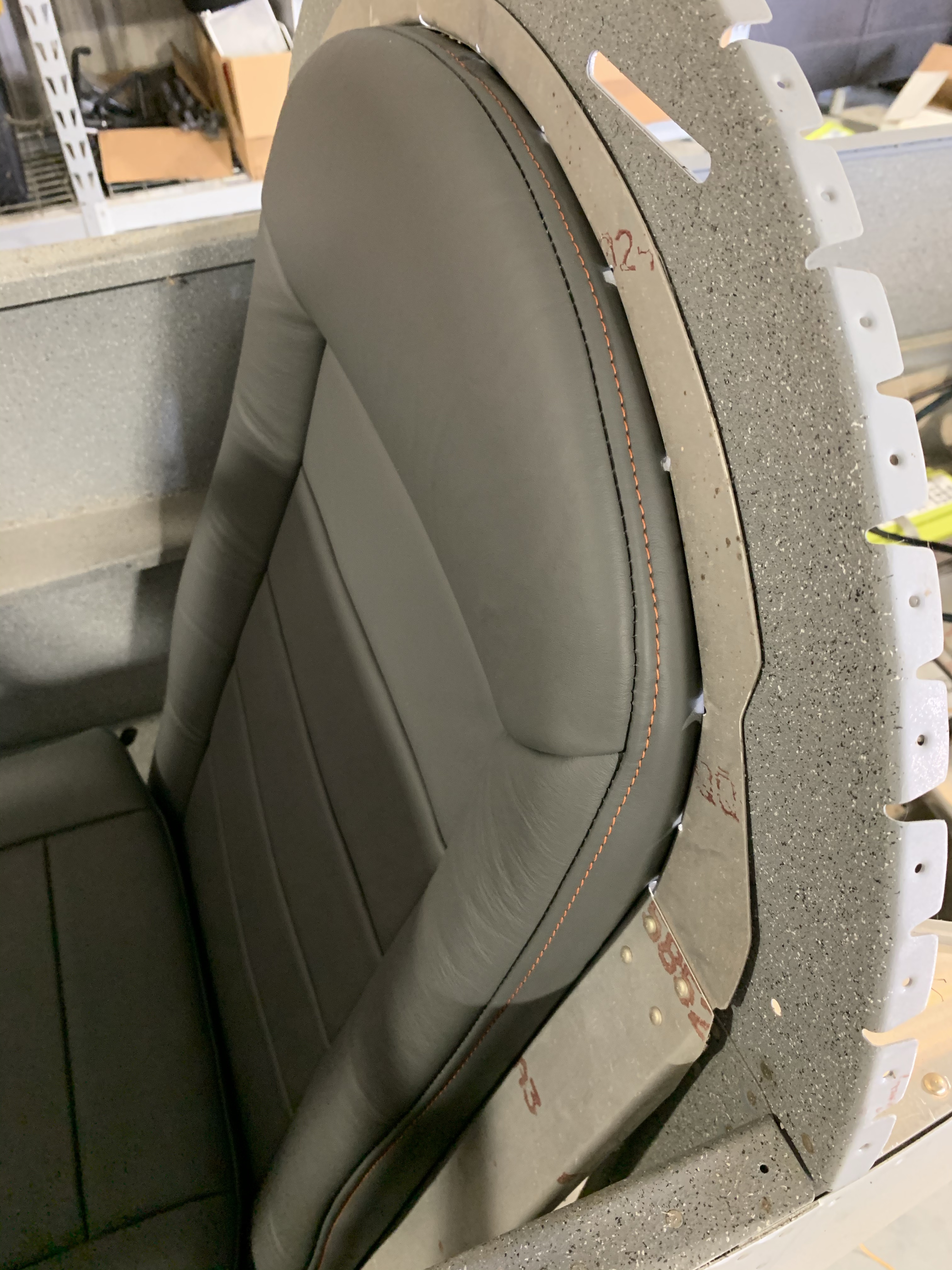 Anyway, that takes us forward to today. Well, I guess sorta last night, because I spent some time just really getting things organized for the riveting work. Flipped the fuselage, got it on the sawhorse, pulled over a table, put the rivets/gun/bucking bars/etc on it…I mean really getting those ducks in a row. And so this afternoon we went to work.

First up were the antenna doublers that I fabbed up a while back. I figured these would be a good easy intro since Josie hasn’t done any riveting in some time. These were going fairly well until we got to the com antenna doublers, which are located right behind the spar carry-through. We’d just shot the first rivet when I really looked at what we were doing, and realized I made a dumb choice when I made these.

Notice those four holes in the pic below? Those are for the wing attach bolts. And the forward flange on that doubler is right in the way of them. Not necessarily a problem if I insert the bolts from forward, but even then they might be annoying for getting the nuts in place. I’m glad I noticed this now, that would have been a really unpleasant surprise when it came time to hang the wings. 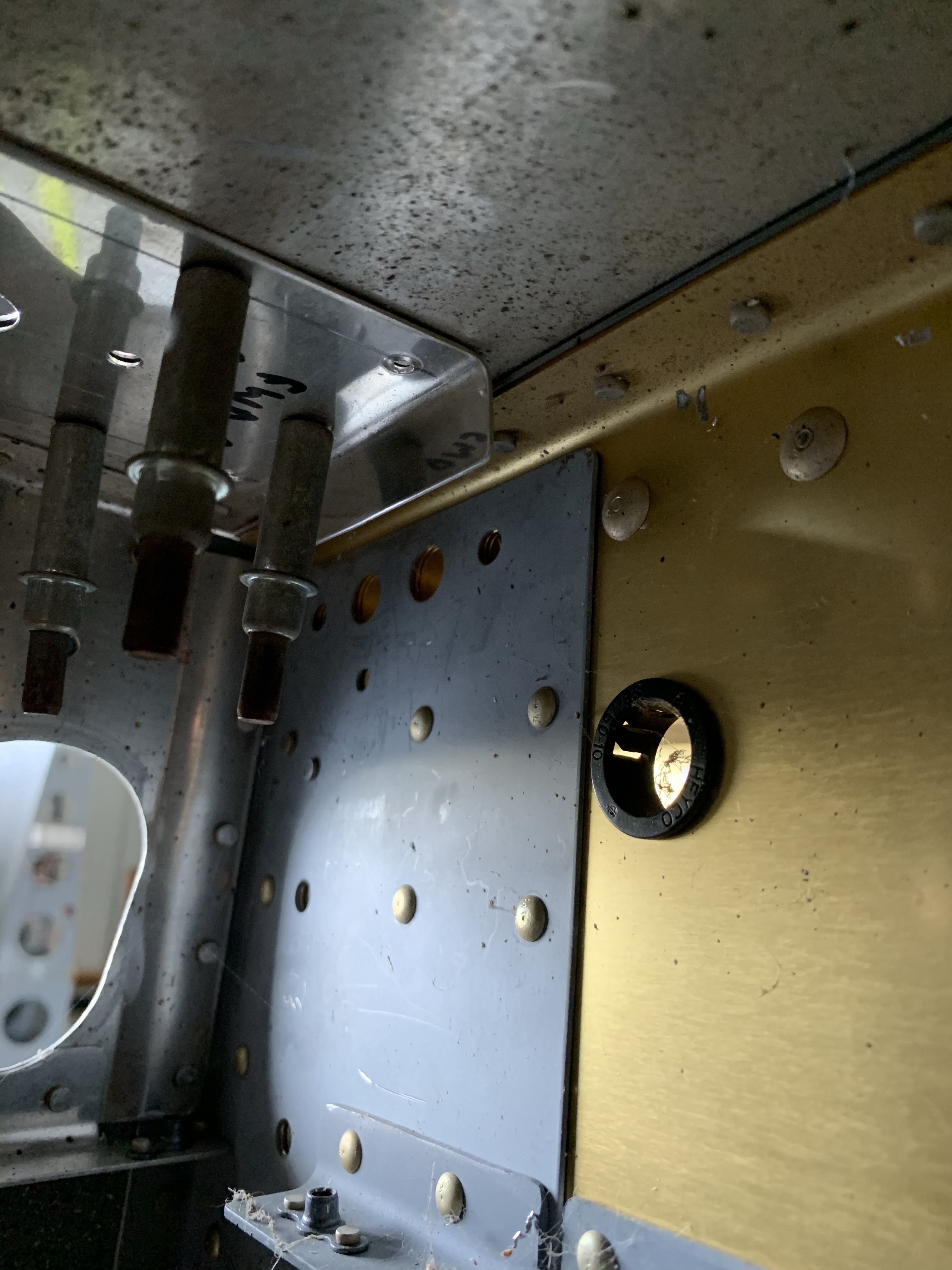 Easy fix though – there’s no real need for that forward flange, seeing as how it’s right beside probably one of the sturdiest areas of the aircraft. So we just paused riveting for a bit, and I removed the doublers and just removed those forward flanges. Easy peasy: 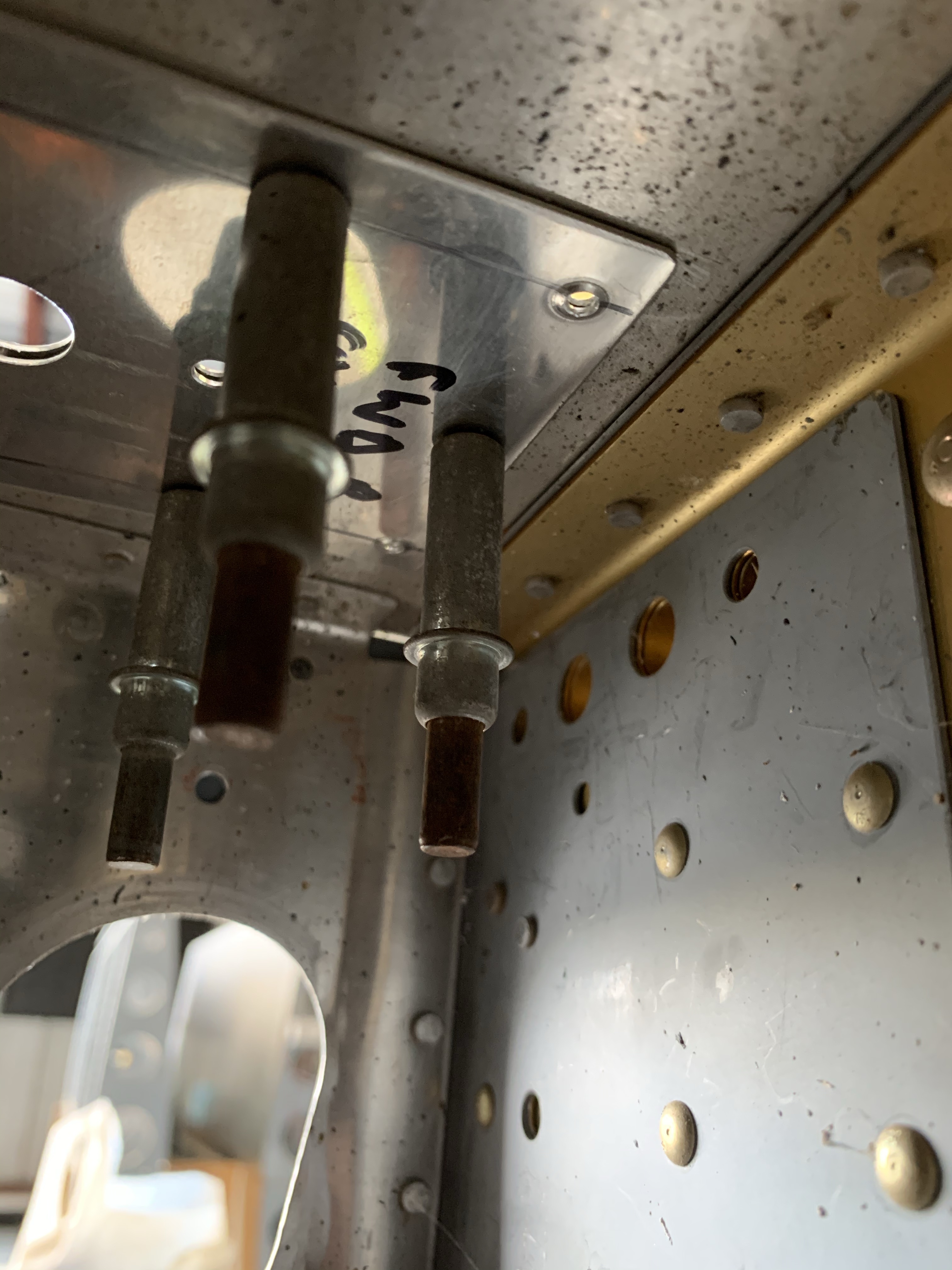 Sometime around when we were finishing up those doublers, Josie decided to get a rare action shot of me doing my thing. Well, maybe not an action shot, just me demonstrating the glamor involved in homebuilding…by which I mean slithering out from under the inverted fuselage: 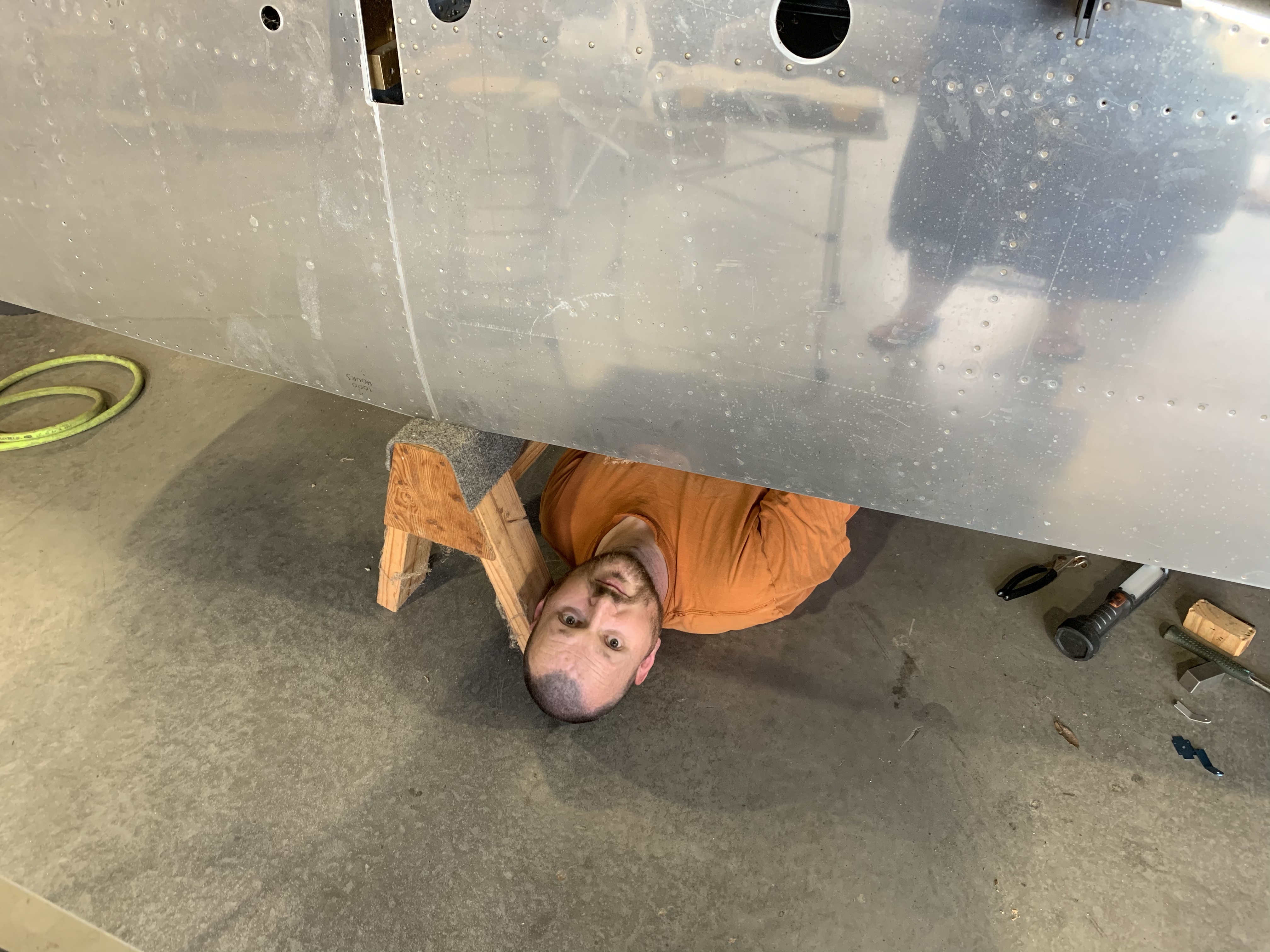 After that, we had time to get the forward landing gear crossmember riveted to the forward floor before it was time to duck inside for some dinner. That was the end of the the day’s riveting, but it allowed me to go ahead and get the bottom forward skins installed, which I did after dinner. Just got to put a sealant bead on the firewall flanges and then get these guys clecoed in place. I also went ahead and installed all the rivets that didn’t require two people. So now I’ve got most of the components at least in place: 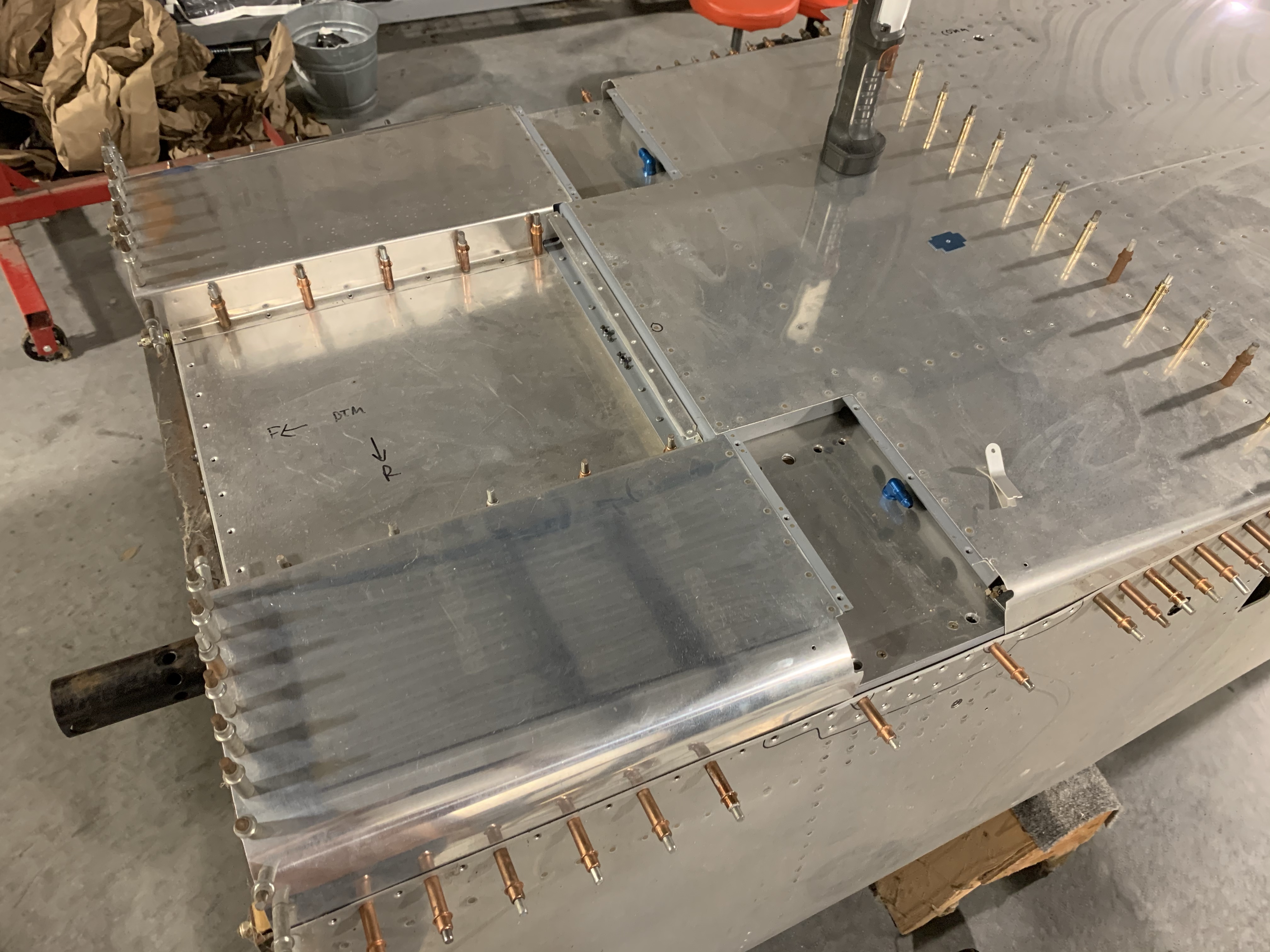 Only thing still missing here is the cooling ramp, which will have to wait until we do a lot more riveting. From here, we’ve got a bunch of rivets along the bottom edge of the side skin (in assembly with the lower longeron and the bottom skins), another line along the forward side of the carry-through, and then the remaining ones on the forward bottom skins. Oh, and there are also a bunch of flush screws to install at the base of the gear towers, which we might as well do as a team.

The only real hangup here is a couple of rivet holes along the lower longeron – there were two spots here where the parts didn’t quite line up properly, and I ended up drilling the holes out for 5/32” rivets. Only problem is, while I have an assortment of those on hand, I don’t have the length needed for this stackup of materials. I thought about doing #8 structural screws instead – because they’re the same size and I have them – but once again, the ones I have aren’t the right length. I figure if I’m going to order fasteners I’m just going to get the rivets I need to go here.