It’s kind of challenging sometimes to keep a positive attitude right now. Even though I’m rationally aware that the stuff I’m doing is progress, emotionally it doesn’t seem super productive spending time standing around staring at things, grunting sporadically, and maybe sketching on a whiteboard from time to time. And that’s pretty much how I spent today, just really try to think about how to best route all the wiring runs behind the panel. Along the way, I changed my mind about some stuff…again. Sometimes I’m never quite sure if I’m being indecisive here and going in circles questioning myself, or actually refining things over time. I’m pretty sure it’s the latter, but the human brain sure is a pesky thing sometimes.

Anyway, the one big decision I made was about how to route the wiring runs going forward of the firewall. I’ve always been planning to bring the main power supply cables in through the left side of the aircraft, through a prepunched hole, but then there’s all the sensor connections and so forth. My working plan had been to route this bundle just inside the deep part of the forward baggage compartment – this would keep the wires from being exposed to potential damage in there.

But the more I considered the logistics of this, the less sense it made. Most notably, trying to work out the harness junction over by the right gear tower would be challenging, but also, I’d have to figure out how to get that bundle to turn a really tight corner to head for the firewall, which would mean also getting liberal with adel clamps or something to secure the bundle. The real kicker, though, was this – keeping the wires out of the baggage area to avoid damage seems good, but instead putting it right beside where my feet will go every single time I fly maybe isn’t such an improvement.

Now, there is a stiffener riveted to the side skin about halfway up from the floor, but it doesn’t stick out too far. Still seemed like this was a potential spot to route the bundle, and keep it protected and somewhat out of sight. Question was…how big would this bundle be? Kind of an important consideration. So I gathered up some of the preexisting harness pieces that would make up this bundle – the eight thermocouple wire pairs and the CPI2 bundles for the coil packs and crank trigger sensors. The only thing missing was for the other engine sensors…OK, time to go refer to my schematics. Turns out this is simpler than it seems, and all those sensors only require eight more wires. This was starting to seem manageable.

Finally, I checked the harness pieces I had against a snap bushing, and found one that they went through with plenty of room for a few more wires. Overall it looks like the bundle will be 1/2” to 3/4” in diameter. Very manageable for this spot. Really, the only thing to work out is how to secure the bundle. There are a couple of options here, but so far I’m leaning towards adding another piece of angle to create a protected space for the bundle…or I might just put some of my ample conduit supply here, just not sure the best way to secure it.

That can wait, because even if I don’t know the exact solution I’ll go with, I’m sure it’s a solvable problem, and all this head-scratching was just in service of figuring out where the harness would split back by the gear tower. Between this decision and a few other similar (but less complex) machinations, I finally got to a point where I felt comfortable expanding on my harness diagram, to cover the entire area behind the panel: 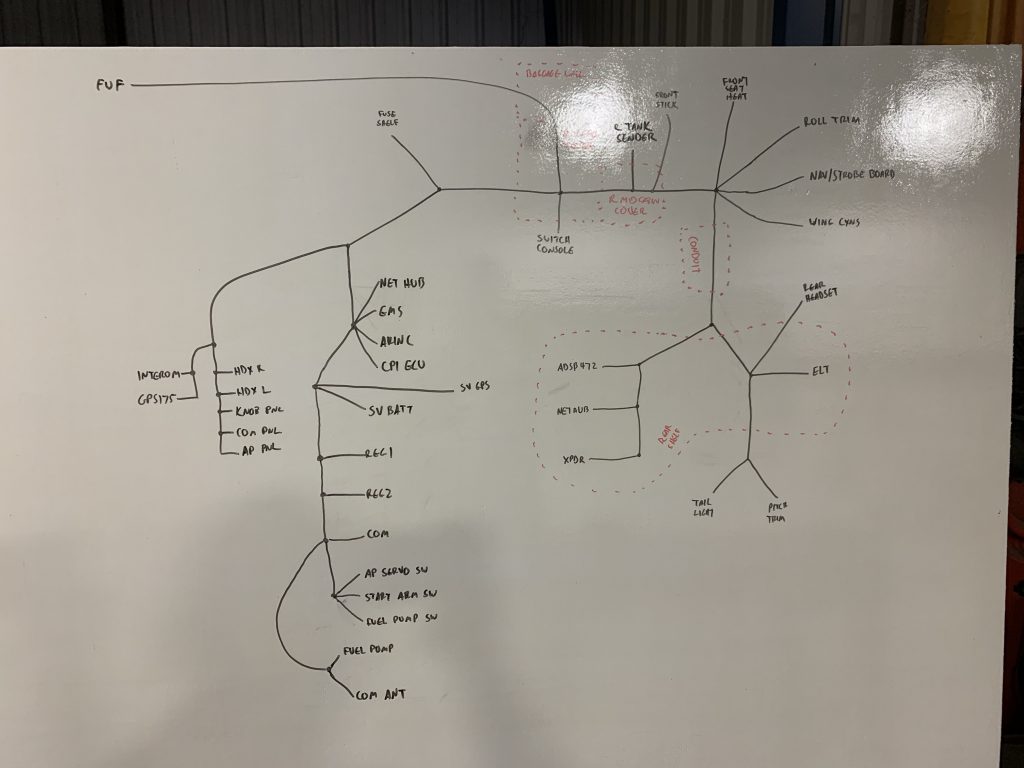 This lays out the general architecture back there: the harness will split somewhere near the right side of the upper shelf, with one bundle serving the components on the shelf, baggage bulkhead, and panel wings (the righthand branch), and another serving the removable center panel. That latter will need some kind of allowance for a service loop, so I can pull the center panel out and disconnect everything for, well, service. Of course, even as I write this, I realize that I forgot a few components here, but nothing that majorly changes things.

The one conclusion I’m coming to here is that it’s probably high time I stopped trying to envision the entire harness in my head, and started actually stringing wires and solving problems in the real world. Which means that I absolutely need to get off my butt and finish the fuselage riveting that I’ve been putting off for so long. Once that’s done, what I think I’ll do for the harness is build up the portions between the tail of the aircraft and the top of the right gear tower, and pull that through the fuselage. For the rest, including all the behind-the-panel and firewall-forward portions, I think I’ll be better off building the harnesses in place, rather than trying to carefully measure each one of those branches above and prepare harnesses on a table.

In the meantime, I can still go ahead and get components mounted to the shelves and baggage bulkhead, in addition to doing the cutting on the wings. But I still feel like I’ve got to stop putting off the riveting work. That’s sort of the elephant in the room that’s roadblocking real progress.