So tonight was about starting to figure out what the harness behind the panel ought to look like. It started with sitting inside and looking over my schematics, with the main goal being to decide whether to not I wanted to add in disconnects for certain modules (like the center panel or the upper shelf). After doing a bit of thinking and tallying up pins that would be needed, I decided that adding those disconnects wasn’t worth the effort. I think the main benefit of doing a single disconnect would be simplifying the service loop needed to allow removing the panel, but at the cost of more planning, more parts to order, and more wire terminations that could be a source of issues down the road.

With that decision made, it was time to start making a go at the layout. I decide to try and do some sort of iterative whiteboard work, sketching out the layout and visualizing the interconnects between devices. The idea is just to layout the paths that wire bundles will have to take, not to detail every single wire. The end result I’m going for is a diagram like the one I drew a while back for the harness to the tail of the aircraft – basically just laying out the wire runs and nodes, which I can then turn into measurements that become the baseline for harness building.

This, in turn, made me rethink some of my wire routing decisions. Initially I’d expect to have significant wire bundles exiting the upper shelf on both the left and right – on the right side would be power/ground connections, plus the beginnings of the run to the aft fuselage, and on the left would be the firewall forward runs, for the engine management system. The main hangup with the latter is that I intend to run the CPI2 FWF harnesses just inside the forward baggage well, to keep the wiring runs manageable. I think it makes more sense to run all the FWF EMS runs through that point, rather than splitting them up. That will leave me with just two firewall penetrations for wiring – the CPI/EMS one we’re talking about here, and one on the far left where the main power feed from the battery will enter.

I think this will be good for packaging behind the panel as well. On the left side I’ll have some SCAT tubing to feed the fresh air vent, which would potentially make routing a decent size wire bundle more interesting. By taking the bulk of the wiring off the left side, this makes things a little simpler. There will still be some wiring over here, but it’ll be limited to a pair of coax runs (for the radio and GPS antennas) and a few wires for fuel pump power and the left tank level sender.

Anyway, the end result of this was some fairly indistinct whiteboard material. Probably this entire diagram will go away and I’ll start over again, because while it decently depicts the interconnects between boxes, I don’t think it’s going to work for depicting the actual harness layout. I expect to end up with sort of two horizontal “trunks” – one that represents connections being router from the far right across assorted boxes, and another that links all the main panel stuff (and this can include the aforementioned service loop).

So at a glance it kind of seems like wasted work, but I think it did wonders for helping me get a better rental image of how things will go together here. I’ve just gotta do a lot more drawing… 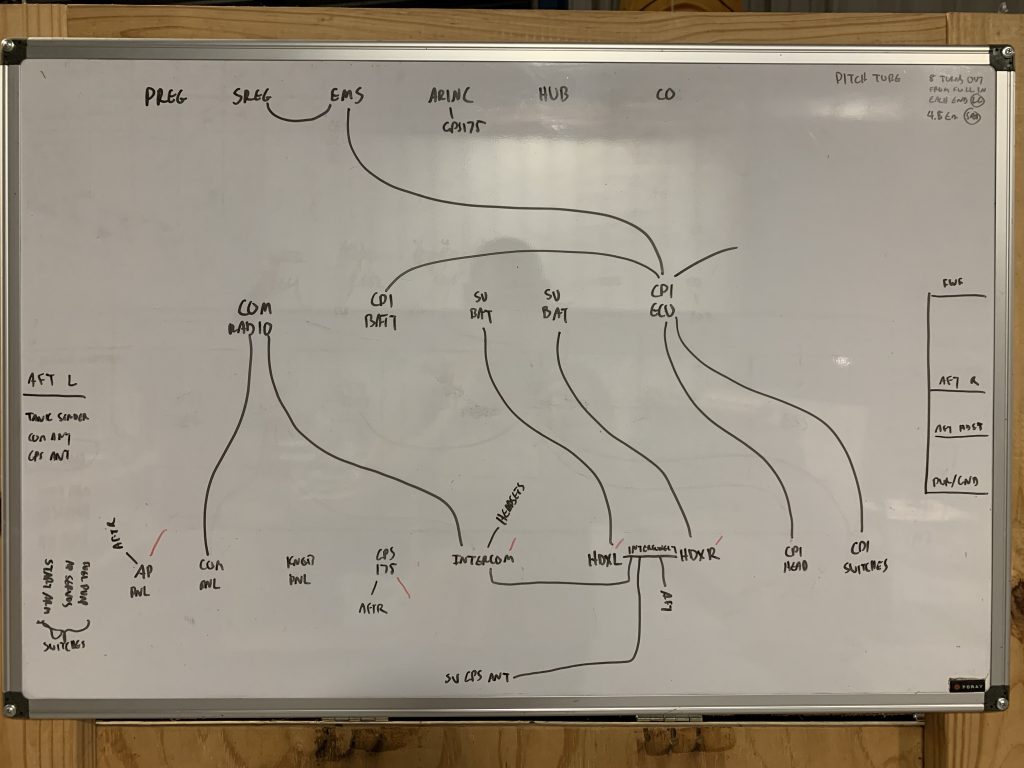