So ends a few weeks of “vacation,” so to speak. Not sure why I got back in my “do other stuff but not airplane building” habit, but it happened. But hey, here we are again.

The one fun thing I had to figure out how to deal with was the Dynon intercom. The main issue at hand was that the mount holes in the faceplate were, for some reason, larger than the other three similarly-sized units. Everything else mounts with #6 screws, but the intercom had holes for #8 screws. That seemed wrong, but it turns out that it’s intentional, or so I was told by the Dynon folks. Their advice was to use mount it with #6 screws anyway.

Well, that could work, but there’s another issue with the intercom: the panel cutout specified in the manual was much larger than the actual unit. That, in turn, would mean that the screws would have to do all the work of locating the intercom, which would in turn be problematic since they’d be undersize. I was just imagining having to carefully align the intercom while tightening the screws every time it had to come out. This isn’t an issue with the other units because the panel cutouts are a snug fit – the unit is primarily located by the cutout, and the screw just secure it to the panel.

After thinking this over quite a bit, I decided to fab up a piece of sheet with a cutout sized to snugly fit the intercom; this could be riveted to the panel itself, with he rivet heads hidden, and thus set this setup like the other units, where the screws weren’t responsible for locating the unit.

It actually took me two tries to make up this plate – I decided to use some scrap .025# sheet, and at first I convinced myself I could make the rough cutout using snips. That turned out to now work out at all; on the second one, I did the rough cut with a Dremel cutoff wheel. Then, just like the rest of the panel, I did lots and lots of filing to size.

Originally I’d expected to not the plate to fit around the nutplates and rivet it separately, but it occurred to me that it’d be simpler to just sandwich it between the panel and the nutplates, and let those rivets also mount it. Getting everything lined up to drill required some brain power, but I got it done. (though not without drilling some shallow holes in the back of the intercom faceplate…oops)

Here’s a look at the locator plate riveted in place with the nutplates. It looks kind of crappy, mainly because the larger cutout in the panel never got really squared up since it was already oversize. None of this is visible with stuff installed, thankfully. 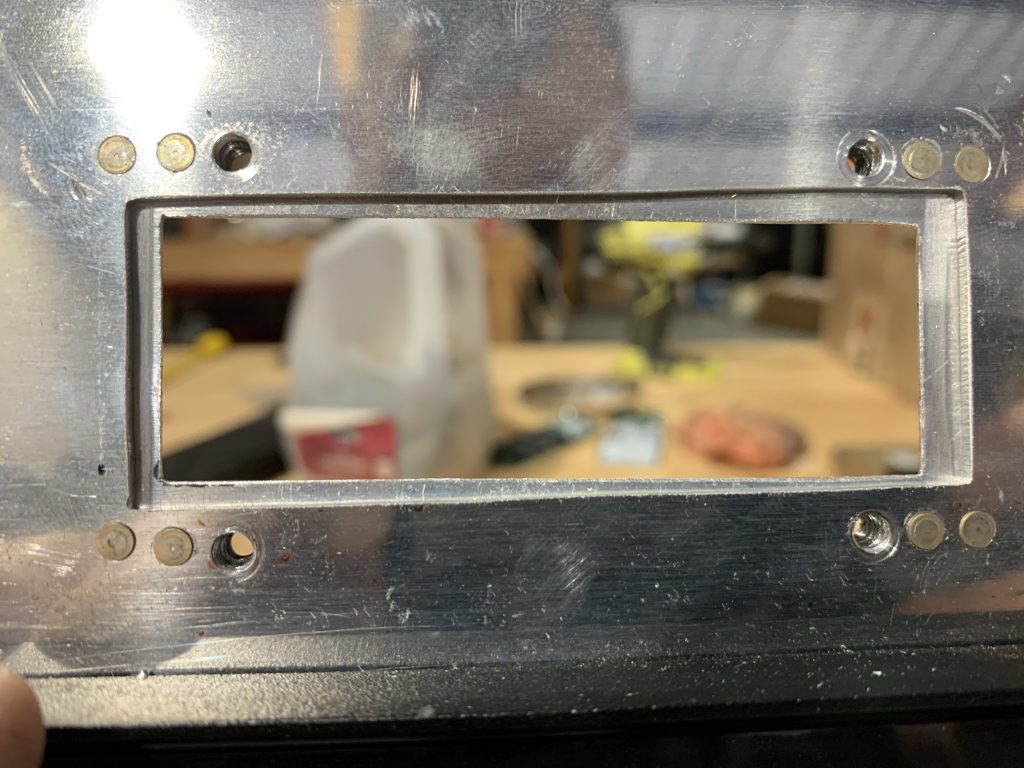 Then it was on to the GPS-175 rack. This was another bit that required some thinking to figure out the fitting process – I ended up removing the knob panel and intercom so I could clamp it in place using the mounting angles. Took a fair bit of trial and error to get things straight before I finally felt comfortable drilling the holes to rivet the angles to the panel. I was acutely aware that a mistake here would probably mean starting over…again. I really didn’t want that.

But it worked out nicely, and then of course I had to get everything installed and hang the thing in the fuselage: 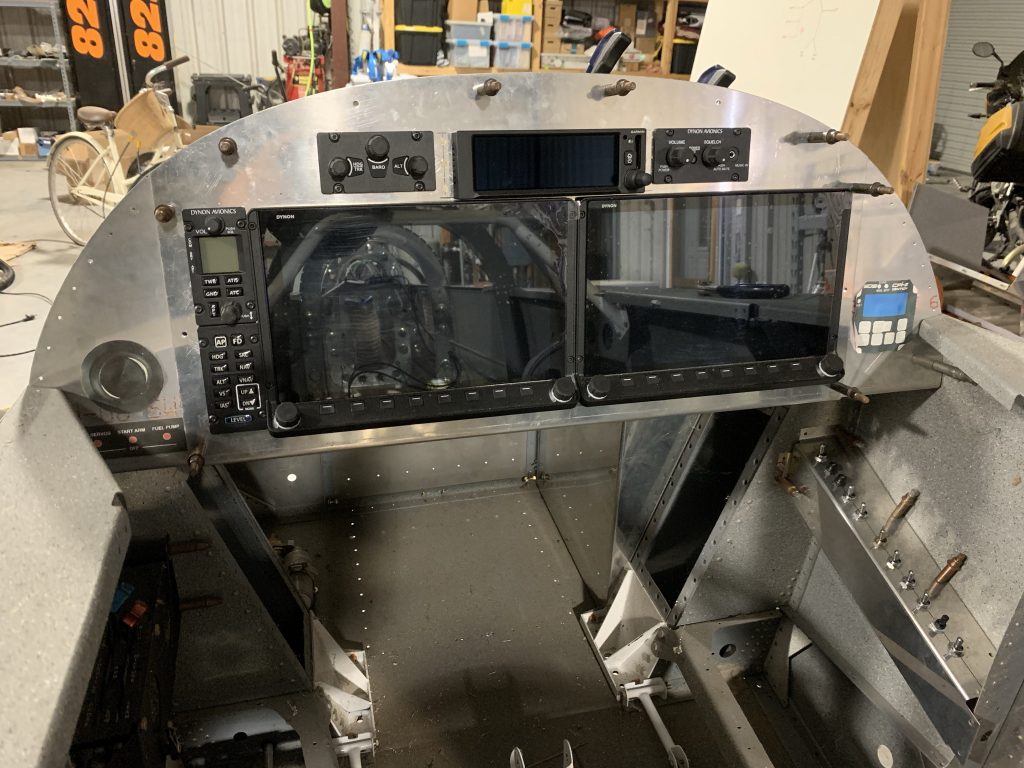 This has me back to the original reason for doing all this: checking the layout behind the panel. I can finally do this for real, because my box from Ross at SDS came in Thursday, so the ECU-shaped piece of cardboard went away and was replaced by the actual ECU unit (visible on the shelf just in front of the two Skyview batteries in the next photo). Also visible here is the CPI2 backup battery, now mounted in its tray from SDS: 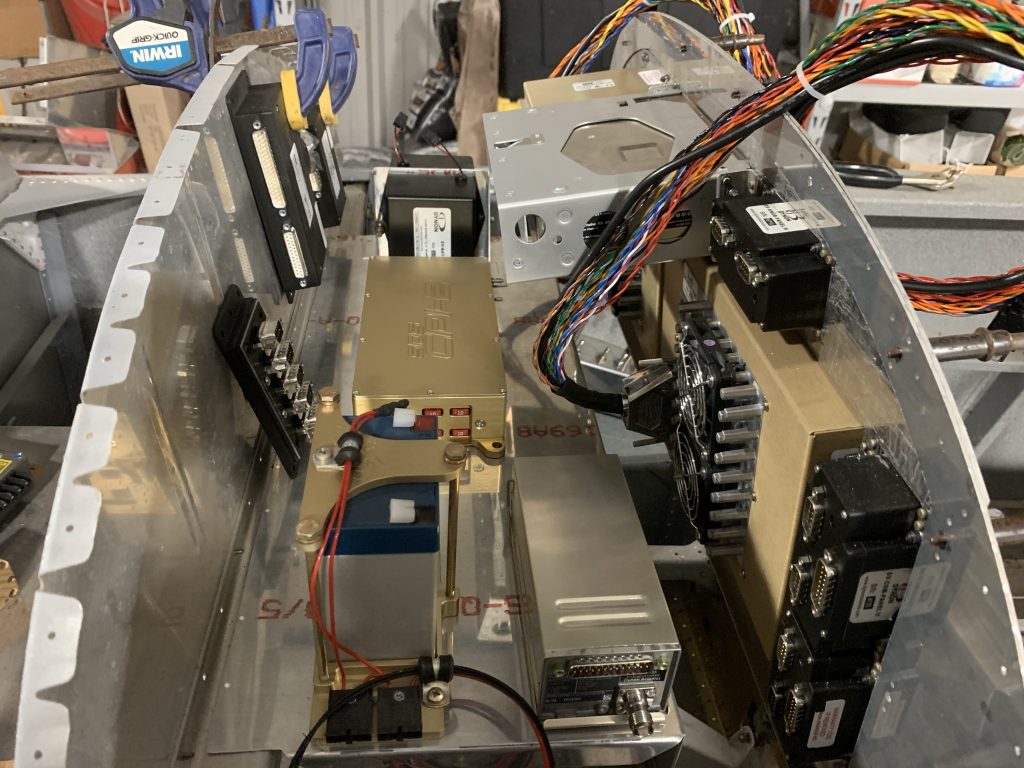 I’m still not quite sure I’m 100% OK with this layout. I think it’s mostly OK, but the one thing that’d be annoying with this setup would be if any of the six blade fuses on the end of the SDS ECU blew. They’re visible on the box, on the end facing he camera. It’d be kind of fun to try and pull those without removing the entire box from the shelf. Still…I’m thinking it may be unavoidable. I think the only way to make those easier to access would be to turn the ECU box 90°, so the fused faced the panel. Doing that would require adding a little extension to the shelf, as the box is too long to fit on the shelf that way. I dunno if it’s really worth doing that, but I think tomorrow I’ll futz around with positioning stuff here and see if I find anything I like better.

Once I get this stuff mounted, the real fun will begin – deciding exactly how the wiring will be routed back here.

Also, I’m thinking about going ahead and doing the rest of the panel – the outboard wings. Mostly that’ll be doing a few more switch mounts, but there’s also the air vent on the left side and the cutout for the CPI2 controller on the right – that one will be fun since it’s octagonal…