So this is sort of a catch-all post, and also includes some work from a few nights ago that I never got around to writing up. The first thing one might notice is that this post is not the “panel cutting part II” that one might have expected, and that’s where the story begins.

Before I even went out to try and work Monday evening, there were some questions about whether my panel cuts were going to work. One thing I didn’t think through before I started cutting was how I’d attach the GPS-175 rack to the panel. For all the other components, the attachment is really simple; the GPS rack is a different matter. Basically, it’s a sort of sleve that the GPS unit slides into, and how it gets attached to the panel is up to the installer. The most common way would be a short piece of angle on each side of the rack, one side screwed to the rack, the other riveted to the panel. But since I put the knob panel and intercom right up against the GPS, there was no room for that. But I had a couple idea I was going to tinker around with.

That all became a moot point as I was preparing to finish the last two cutouts, because I noticed that I bungled the intercom cutout. Basically, when measuring in from the device outline to lay out the cut lines, I switched the measurements, and as a result cut a hole that was too narrow and too tall. And because of the way this worked out, I’d cut out the material needed for the attach screws. No coming back from that one, unfortunately. But it didn’t bother me too much, since I was already considering that the GPS rack might be a deal-breaker.

I still got some stuff done that night though, just went looking for menial stuff, which resulted in me digging out the antenna doublers I made a while back and getting their rivet holes dimpled – that’s in preparation for the fuselage riveting session that I really hope I can get done soon.

That brings us to tonight. I’ve got a new panel blank on order from Van’s, which should be here early next week. In the meantime, I needed to find stuff to work on – in fact, I need to generally get in the habit of finding stuff to do even if my “main” desired task is held up by something. I’m never going to finish this if I can’t find ways to be productive outside a narrow area of focus.

So I started by going ahead and jabbing up the GPS rack attach stuff. Nothing too exciting here – I cut a couple short pieces of angle, shortened one leg from 3/4” to 1/2” to minimize the amount of dead space I’d have to put between the GPS and its neighbors, marked and drilled it for the screw holes in the rack, and installed nutplates in the angles. Got those installed in the rack for a test-fit, and they look good: 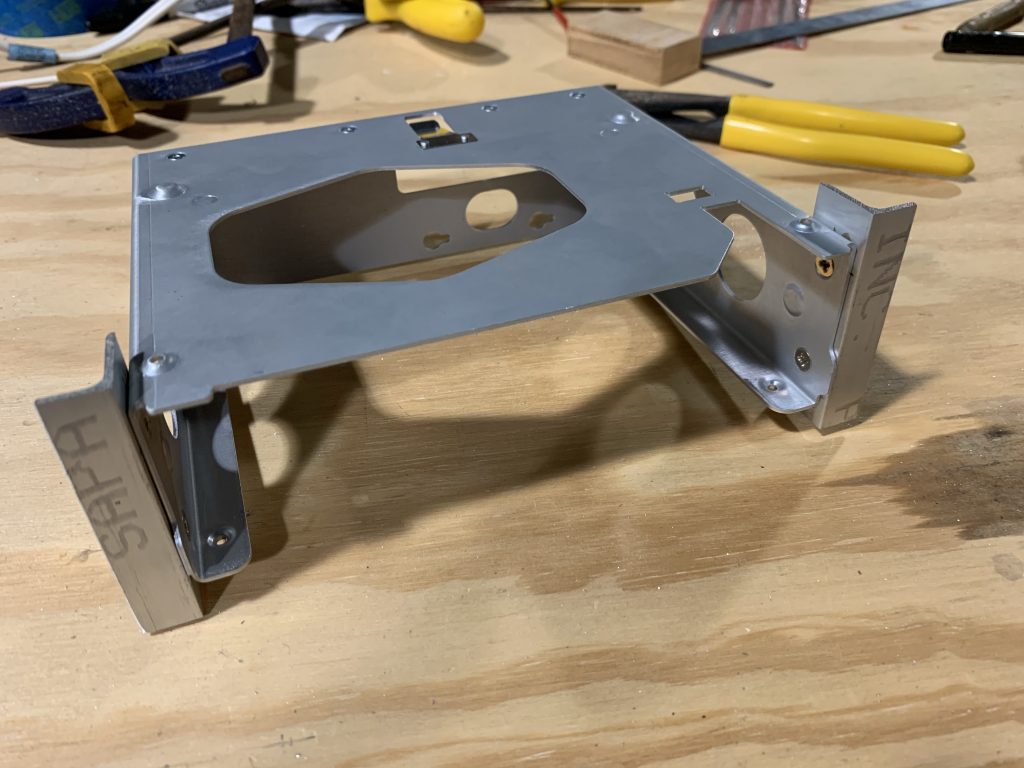 Note that they’re still oversize; I’ll need to remove them and trim to final size before I fit them to the panel for real.Also worth noting here is that the real fun is positioning these angled properly relative to the forward end of the rack. The rack needs to be carefully located relative to the panel surface for the GPS unit to sit flush like it should. I ended up here with the angles a bit further back than I want, but that’s the error I’d prefer; I can add shims in between the rack and panel if needed, and I expect I’ll end up doing just that.

OK, now what to work on? Well, there was a new service letter released for most of the recent tailwheel RVs a couple months ago. Not a mandatory service bulletin, but something recommended to be done if desired. Basically, there have been instances of deformation of the last tail bay, believed to be due to stresses from the tailwheel, specifically if the tailwheel hits a significant bump while turning – thus putting a strong side load on this area. The fix is to add a diagonal stiffener on each side of the skin in this area to provide some reinforcement.

I decided this was worth doing preemptively, and so when I ordered some parts from Van’s a while back, I included the two stiffener pieces, and I decided tonight was a good time to take on this project. Overall, it’s pretty straightforward.

First up, the two end rivet holes for each stiffener are located. The service letter provides instructions for these; basically, you draw an arc a fixed distance from a few reference rivets, and use the intersections of those arcs for the rivet holes (note the marks upper left and lower right): 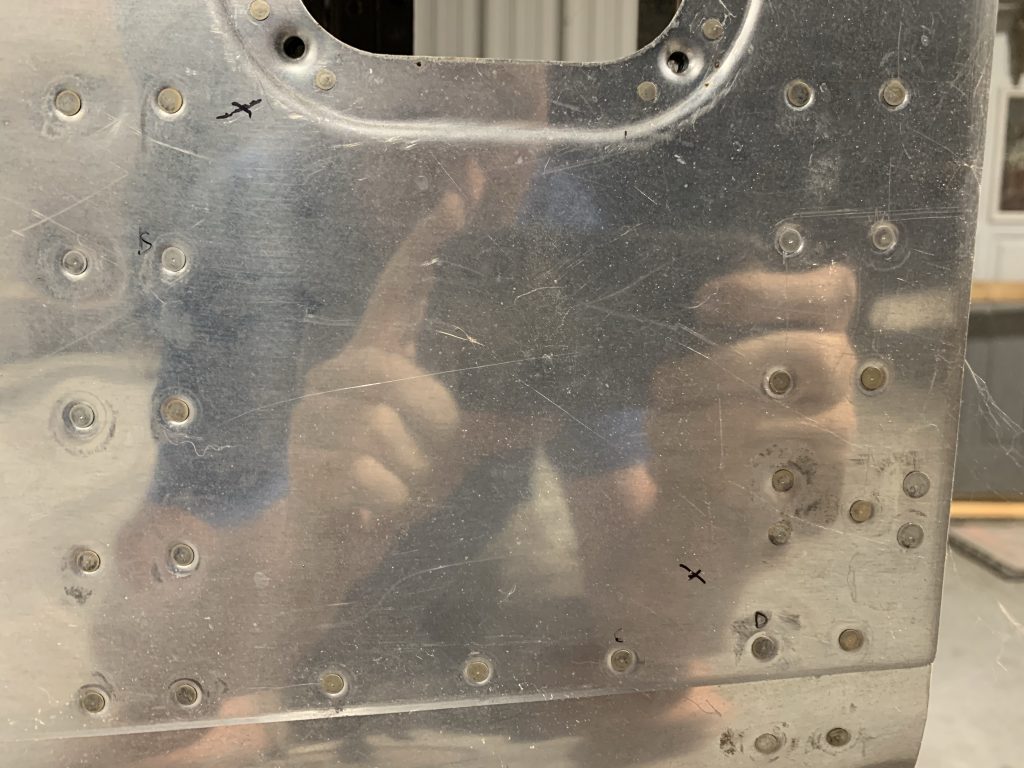 These holes are used to initially locate the stiffener on the outside of the skin, where it’s used as a drill guide for the other three rivet holes. After some demurring, it’s time to cleco the stiffeners in place inside the skin and check for interference. It may not be super obvious from this photo, but the aft end of this stiffener overlaps the aft bulkhead flange, so it’ll need to be trimmed: 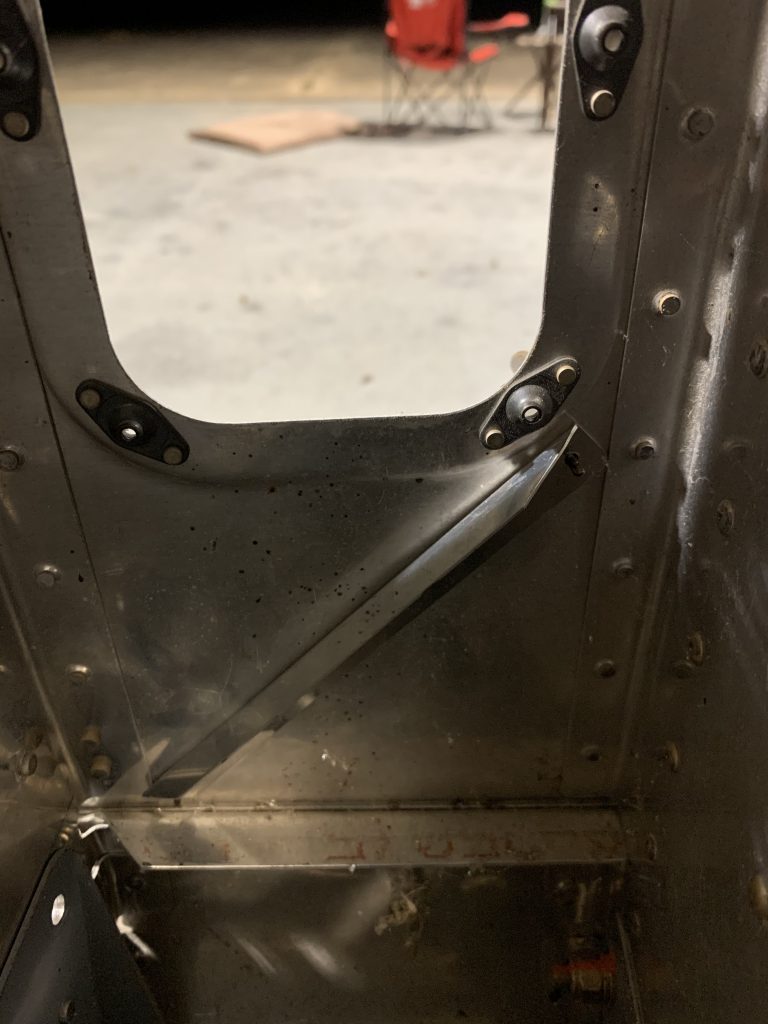 After trimming both stiffeners (they both had the same interference with that bulkhead), doing some trial-end-error to get everything right, I got them all polished up on the bench grinder and dimpled. Then it was time to dimple the holes in the skin. The upper/forward three were easy enough to do with a 3” yoke, but the other two on each side required breaking out the pop rivet die set – which is really hardly up to the task of dimpling this thick skin. I ended up dressing those dimples with a countersink bit to get the rivets to sit properly flush – the dies themselves didn’t quite cut it. Now the stiffeners are clecoed in place and ready for riveting: 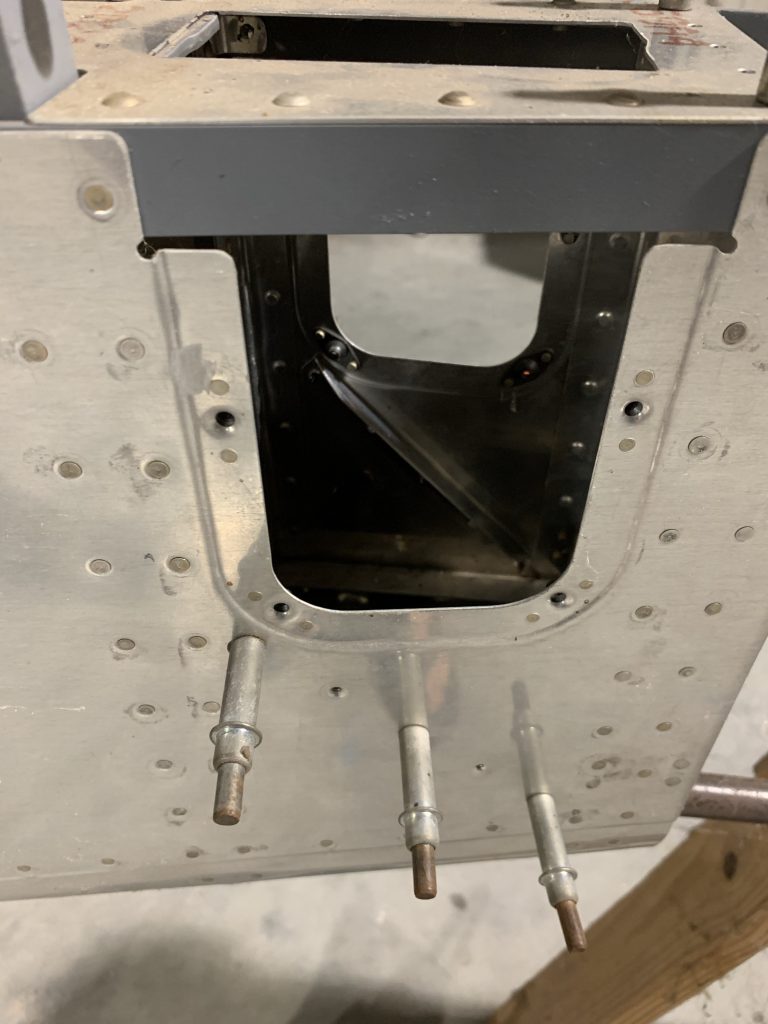 Since it was nearly 10:00 now, and since some of these rivets will have to be done with the gun, and since I want to be nice to my neighbors, that’s where I called it a night. I figure I should be able to finish this up tomorrow.