Yup…today it was time to start making a whole bunch of cuts. Last time I was trying to decide what tool to use, and after some research, I ended up picking up an oscillating Dremel multi-tool. I was far from certain it would work well for this purpose, but based on some feedback from friends, I decided it would be worth having one around in general even if it didn’t work for this. Which is a good thing, because after some testing, I decided it wasn’t the right tool for cutting the panel. It’ll go through thinner sheet quite well, and is very controllable, but for thicker material it’s slow going…and I figure the slower the going, the more time I have to mess up a cut.

So in the end I went with the good old jigsaw. The main downside to this was that it meant having to make a lot of big pilot holes in which to start the saw – unlike the plunge cuts I’d hoped to make with the oscillating tool. So the first order of business for the day was to lay out and drill a bunch of holes – first, #30 holes at all the inside corners I’d be cutting, then 1/2” entry holes for the jigsaw blade. Essentially, I spent about the first hour of the day just drilling.

Then, with all the various holes done, it was time to go to work with the jigsaw. Not much to go on about here, just lots and lots of careful cutting, plus frequent pauses to sweep/vacuum up the copious aluminum dust I was making. Here’s a look at the state of things after making the first couple rough cuts: 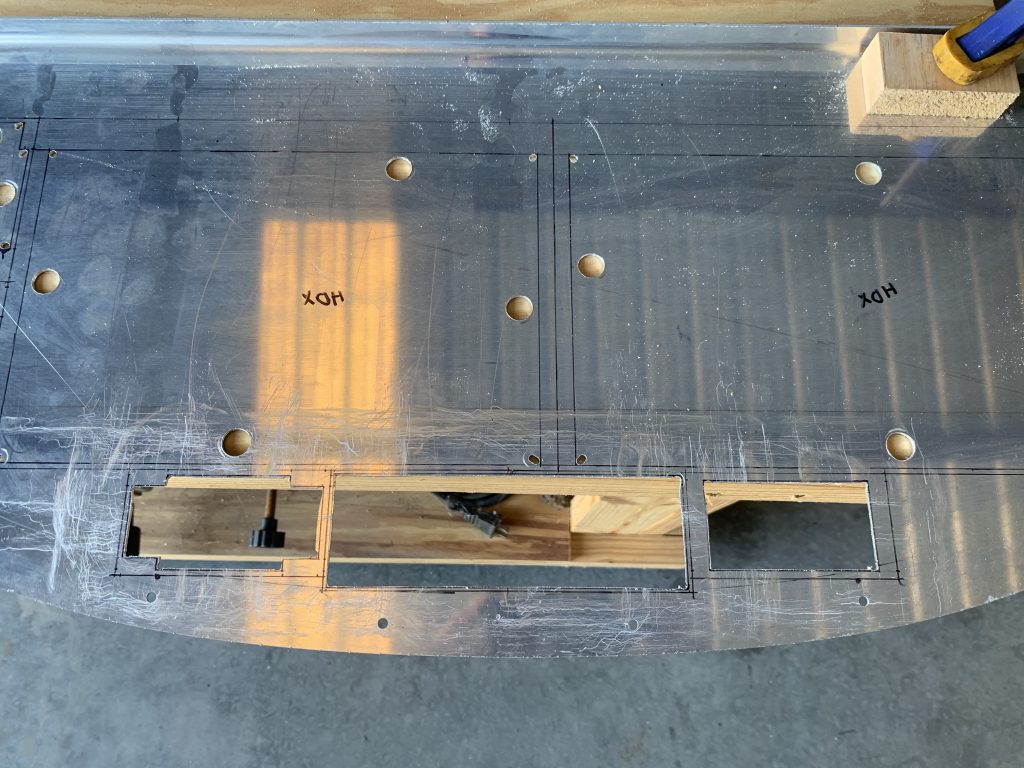 Eventually, I had all the rough cuts done. I intentionally cut a bit away from the final cut lines, wanting to carefully sneak up on final dimensions instead of risking overdoing anything. Another fun part of this was dealing with clearance issues that affected the jigsaw. For the lower right cutout below, the stiffening lip at the bottom edge of the panel made it impossible to effectively cut the two outside vertical lines – hence why that cutout is a bit rougher looking than the rest. I got creative to remove as much material as possible with the jigsaw, but there was just going to be more to take off later for that one: 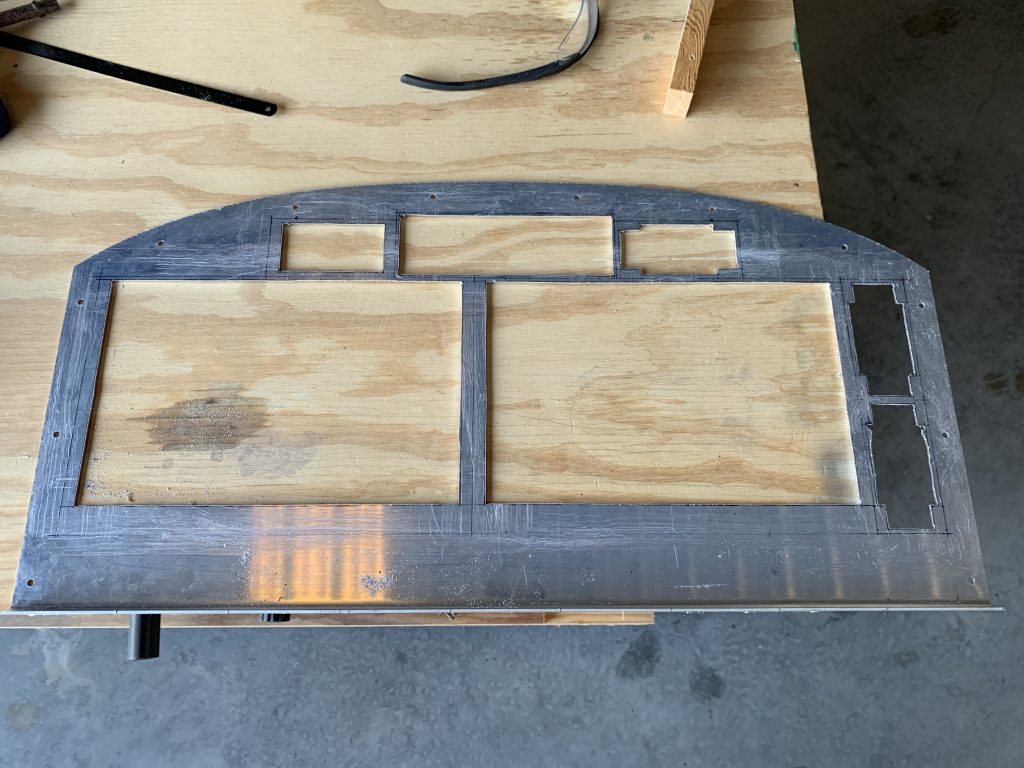 Next came the tedious part of the process: getting those cutouts up to size. I started with the large display cutouts, which are pretty straightforward but also pose a bigger challenge in getting the long edges straight. The first display cutout took me probably an hour or more – I was really being conservative in sneaking up on final size. The second went a lot faster, since I had a better idea of how the cut lines I’d drawn related to final size. Basically, it was a case of removing the lines entirely (vs removing material right up to them) for a good fit.

The tedium paid off with some motivating test-fit action: 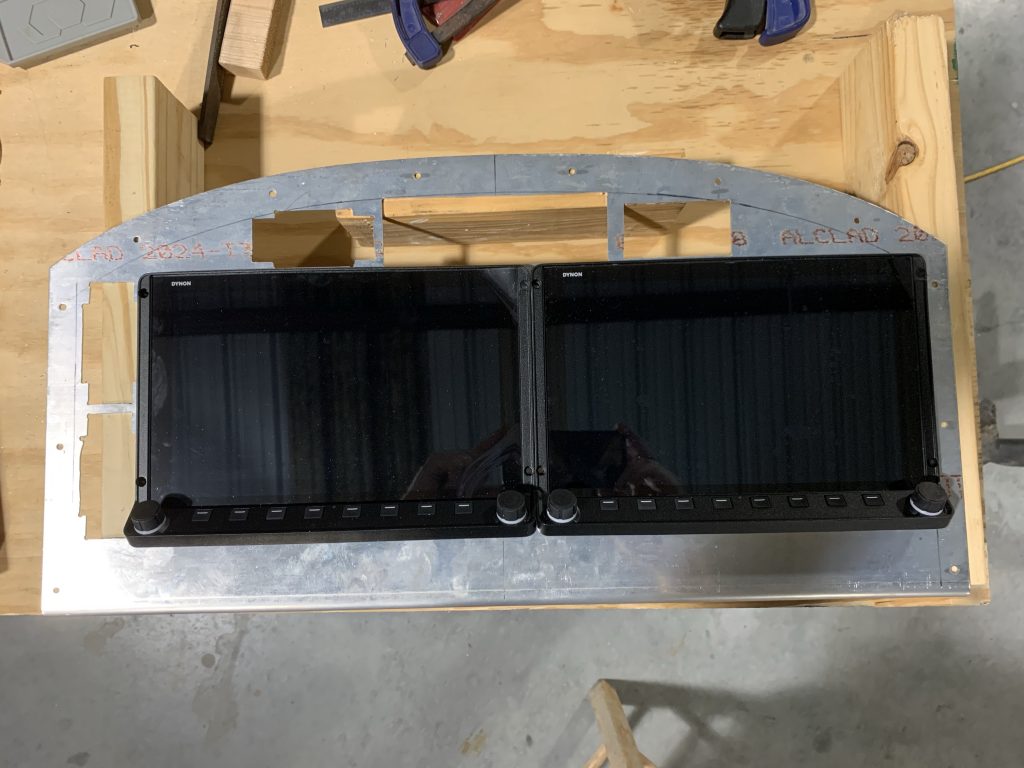 Then it was on to the real fun: working with the sort of cross-shaped cutouts for the AP/knob/radio heads. Working up to the fit here was a whole lot more fun, since it wasn’t just a matter of “the cutout’s too narrow here” – there was also the question of whether it was the inner or outer edge that was too small. And here I repeated the previous performance with the display; I probably spent an hour and a half getting the first piece (the AP panel) to fit, and afterwards decided it was time to break for dinner. After that, the other two I got done in less than half an hour each.

And at this point the test-fit action was even more fun to look at: 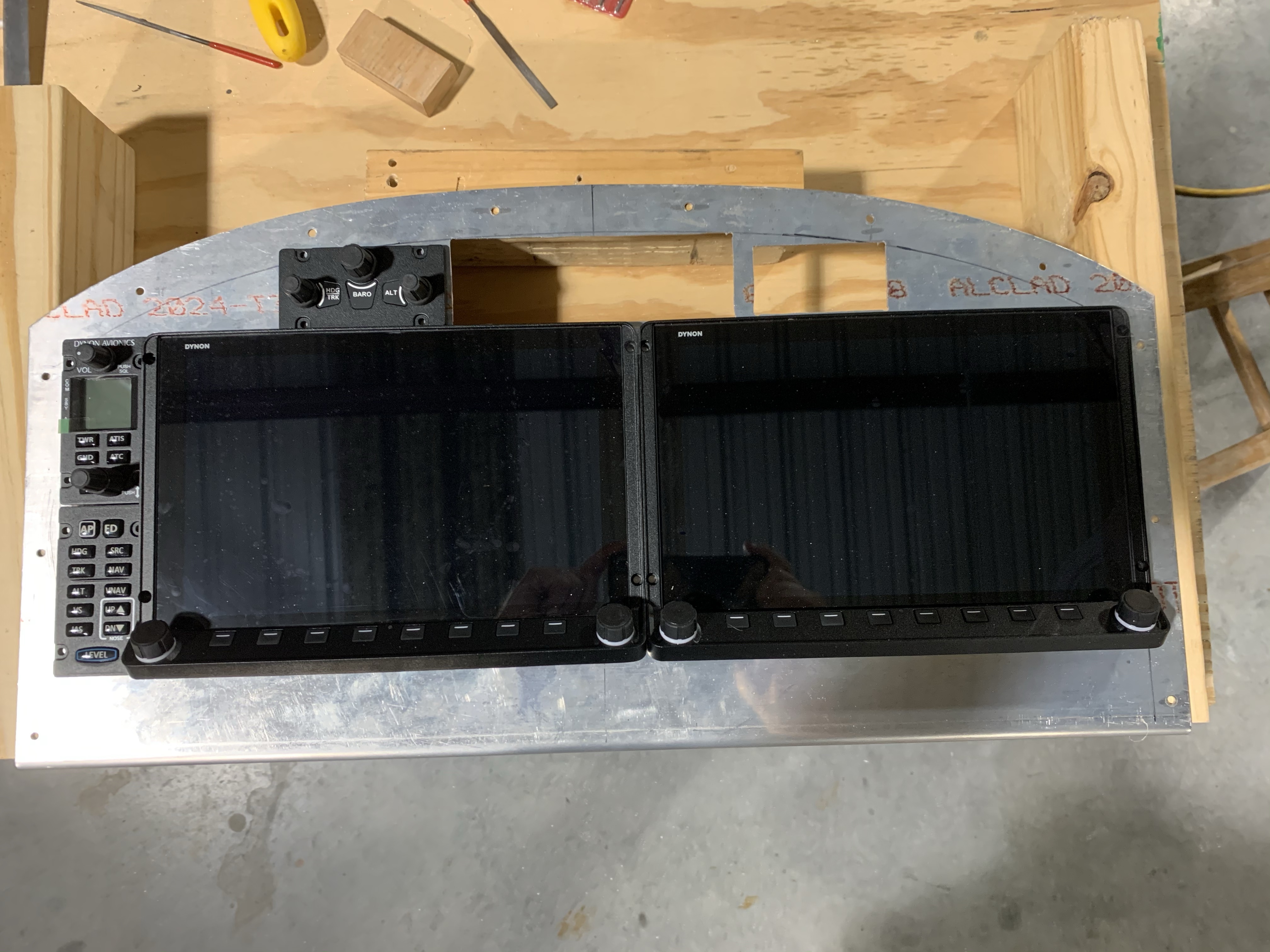 The good news is that this is probably the worst of this work. The intercom and GPS-175 cutouts are fairly normal squares, none of the crazy stuff, and should go faster. The one thing I need to figure out is how I’m going to attach the GPS-175 rack to the panel – probably something to ask around on VAF about.

Once I get the other cutouts done, I’ll do a final test fit of all the components at once, and then I’ll actually drill the screw holes and get the nutplates installed; by doing this last, I can ensure that everything line up really nicely while I’m doing the holes, though to be honest everything is looking great so far just fitting snugly in the assorted cutouts. Then I can actually hang this thing in the fuselage and evaluate my behind-the-panel layout.

(I’d also like to climb in the thing and play with the avionics while making airplane noises, but that would require taking the fuselage off the rotisserie…not really worth it. Later…)