So as I mentioned last night, I think it’s high time to go ahead and get this panel cut so I can convince myself for once and for all that my avionics shelf layout is solid. Plus I’ll need this done before I can start finalizing the harness behind the panel as well.

A perennial question has been whether to cut this by hand or have it CNC’d, and I’ve decided to go with the former. My motivation here is that I feel like I’ll spend as much time making a precise CAD drawing (mostly figuring out how to do so) as I will just doing everything by hand. Also pertinent here is that I haven’t finalized the exact location of some things, which I think is easier done drawing on actual parts.

So with that in mind I printed out assorted layout sheets and went to work with a ruler and a Sharpie. The first order of business was to figure out the vertical location of the whole group of stuff; basically, I want to place everything as high on the panel as possible. The limiting factor there ends up being interference between the brace behind the panel and the upper outboard corners of the intercom and knob panel. Those flank the GPS-175, which is centered on the panel, so it was pretty easy to draw out the horizontal edges of the bezel outlines and then figure out the highest point the bezels could be.

Once those three items were laid out, the rest of the design flowed from there, and I got the bezel outlines traced out for the two displays and the radio and AP panel. I took some time at this point to hold various components up to their outlines just to sanity-check that I hadn’t done anything grossly wrong.

Next up was working out the actual panel cutouts. The displays are pretty easy; they just have slightly smaller rectangular cutouts. The same is true of the intercom and GPS-175 cutouts. The other three Dynon units are a little more fun, as they require sort of cross-shaped cutouts – I guess they needed extra space in the modules to fit more stuff? Whatever the reason, those were a little more tedious to get done, but not horrible.

So now I’ve got all my cut lines all laid out. I haven’t bothered to mark any of the attach screw locations; my intent is to use the actual components in place to mark and drill those. That way I can clamp everything in place where I want it and ensure it all lines up properly; there will be enough room to work with the cutouts to adjust positioning as needed. 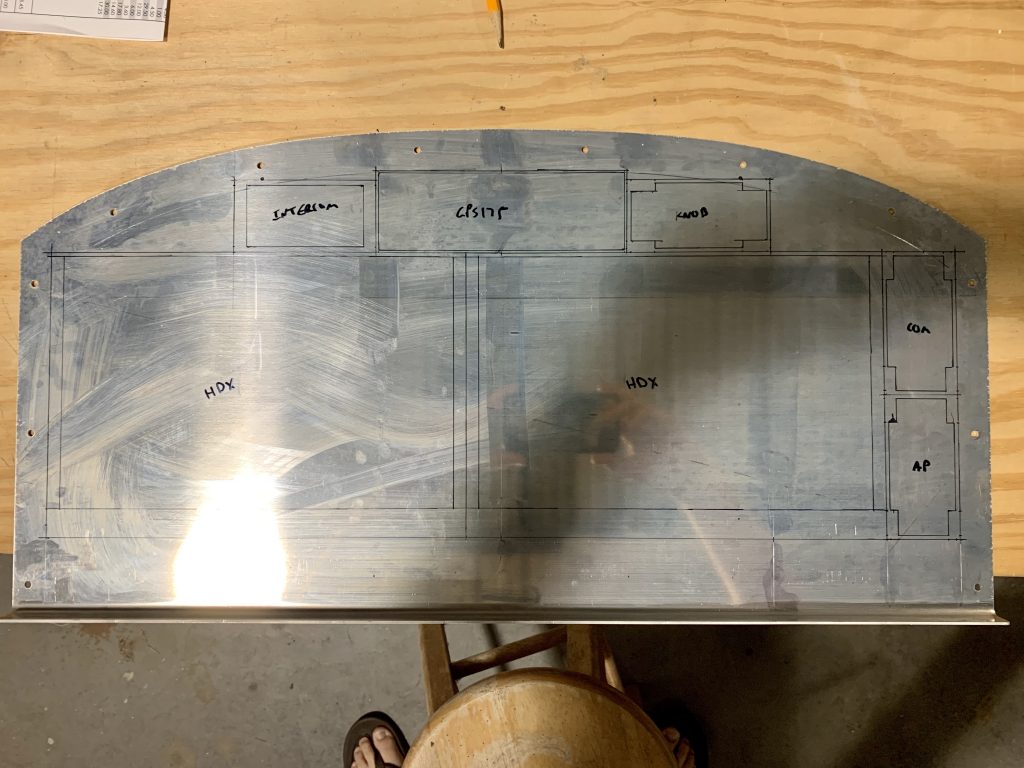 The remaining question is how I want to actually cut this. Typically I’ve done stuff like this with a Dremel cutoff wheel, but it’s not especially precise and will probably not like the thick material here. I’ve seen where people mention using a jigsaw with a metal cutting blade, which I have, but I’ve never been a huge fan of jigsaws for making precise cuts. The other option, which I looked into last night for a bit, is to buy something like a Dremel SawMax, a compact high-speed circular saw. They’re supposed to work well for making straight cuts, though I think it might be a bit much for the smaller cutouts. I’m somewhat tempted to get a cheap vibratory saw and see how it does against aluminum.