Well, not the most productive day in terms of shop time, but progress is still progress. The first thing I attacked today was some reorganization. With the recent electrical stuff I got, plus some other hardware, I was kind of outgrowing the parts bins I had, and I picked up another one when I was at Harbor Freight last weekend. What started as “find homes for this stuff” eventually turned into a pretty involved shuffling of parts.

Among other things, there was a lot of ground to be made by consolidating hardware – because of the way Van’s ships hardware bags, it’s very possible to have the same item split up in multiple places, That was doubly true since I had some hardware I’d bought independently. In the end, I emptied out probably ten or so assorted hardware bags, either by combining items or just being able to dump the contents of s bag into a dedicated bin.

With that done, I was once again left to figure out something to work on, and I settled on fabricating a mount for the two Skyview backup batteries. I’ve had this idea for a while, as a way to simplify packaging behind the panel, and I even had a rough cardboard template that I made up a while back. I’d been unsure whether I wanted to do this or not, but there’s been a little too much imagination involved in considering the layout behind the panel, and I felt I needed something physical, even if it ended up not getting used.

The fabrication was pretty straightforward, again using some scrap .025” sheet that was lying around. Even though I had that cardboard template, I laid out the piece here from scratch, using an actual battery (unlike the template, which I made based on dimensions from the Skyview install guide).

After the first rough cut, I had the general shape – a central rectangular part that the batteries would rest against, two triangular ears to provide support, and tabs to hold the screw holes that will secure the thing: 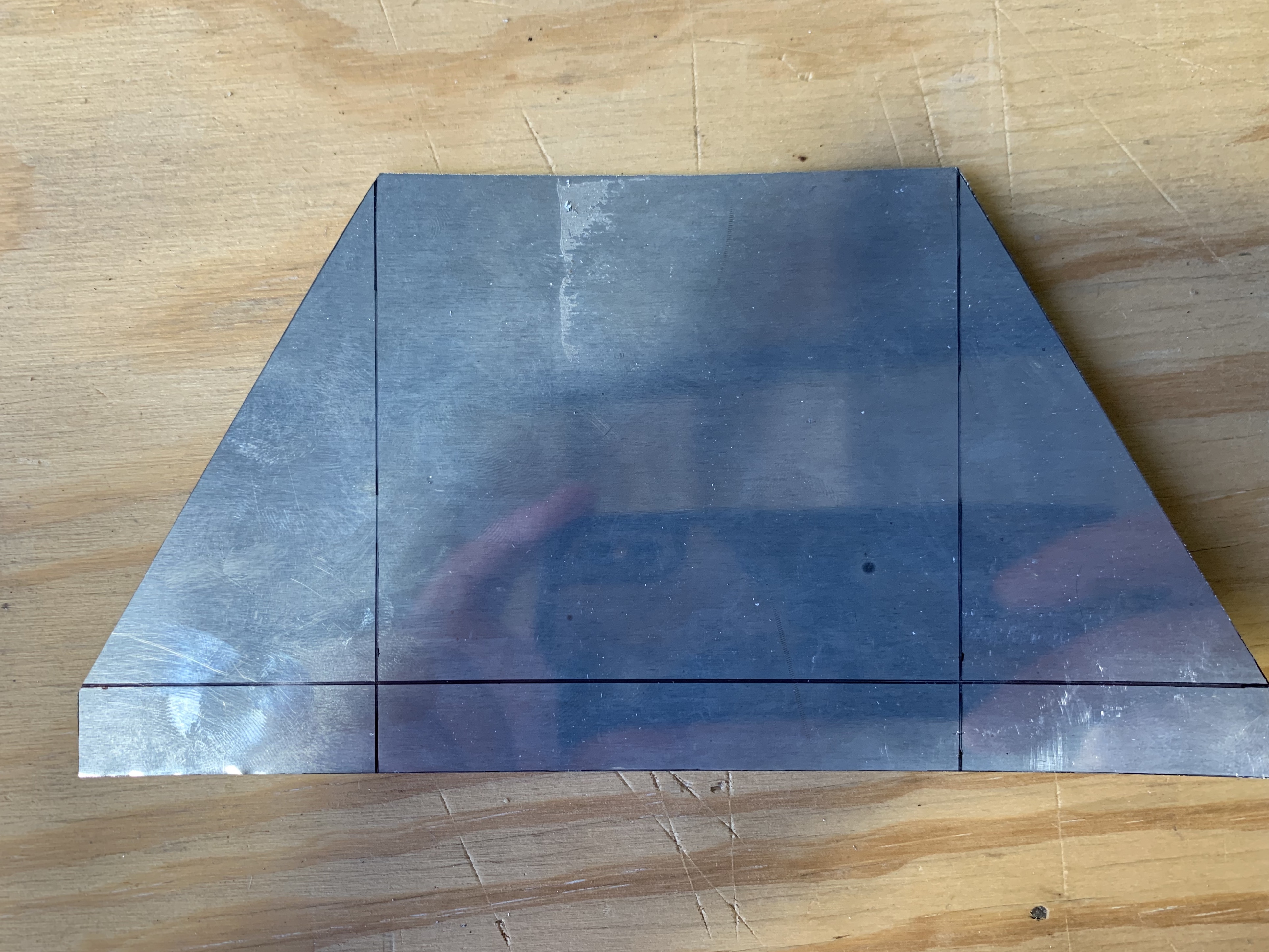 A bit later, after cutting out the area between the ears, finishing all the edges, and laying out and drilling the mount holes: 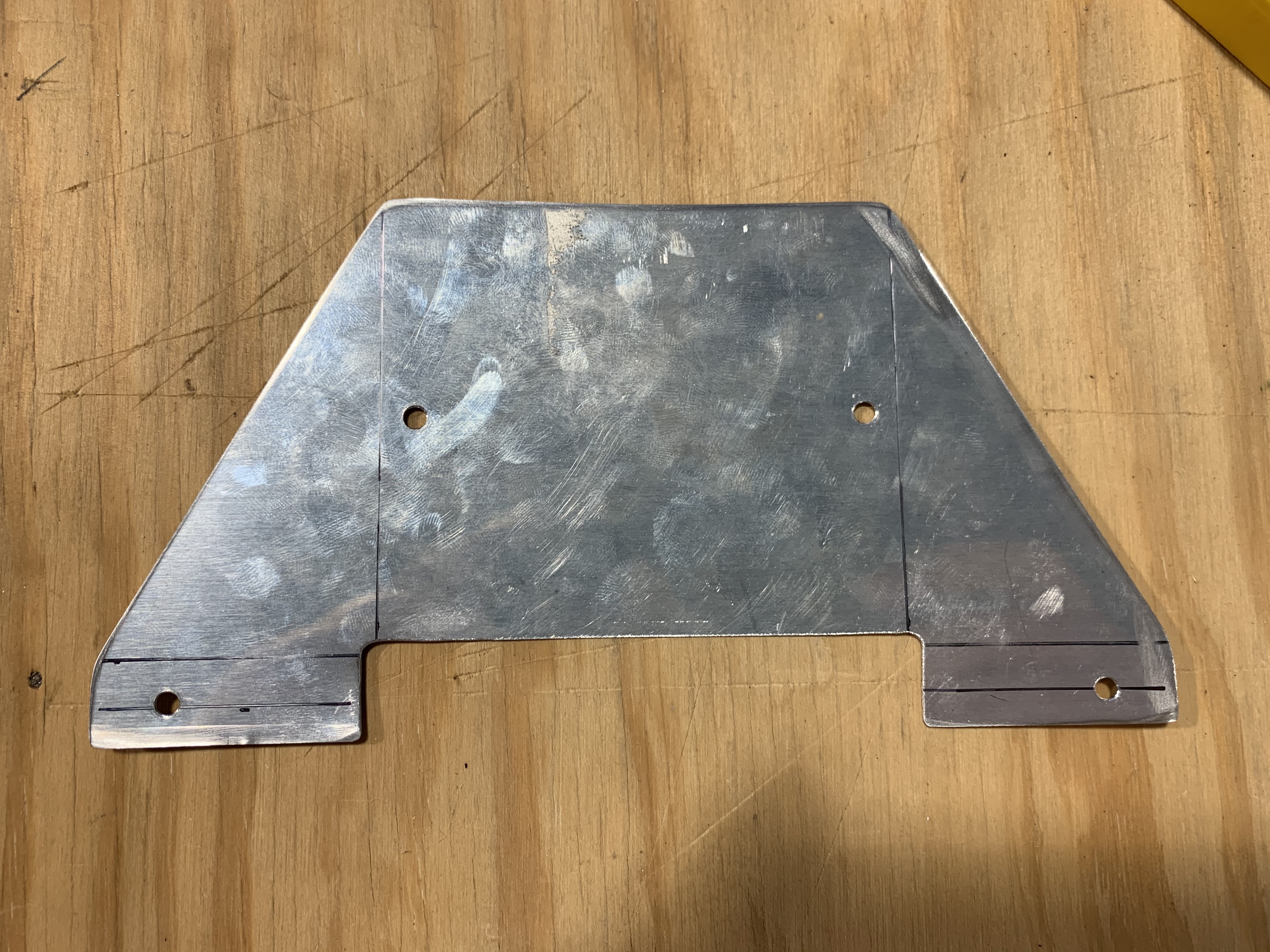 Then it was time to break out the dead blow hammer and commence physical violence, using the workbench as usual as a bending form: 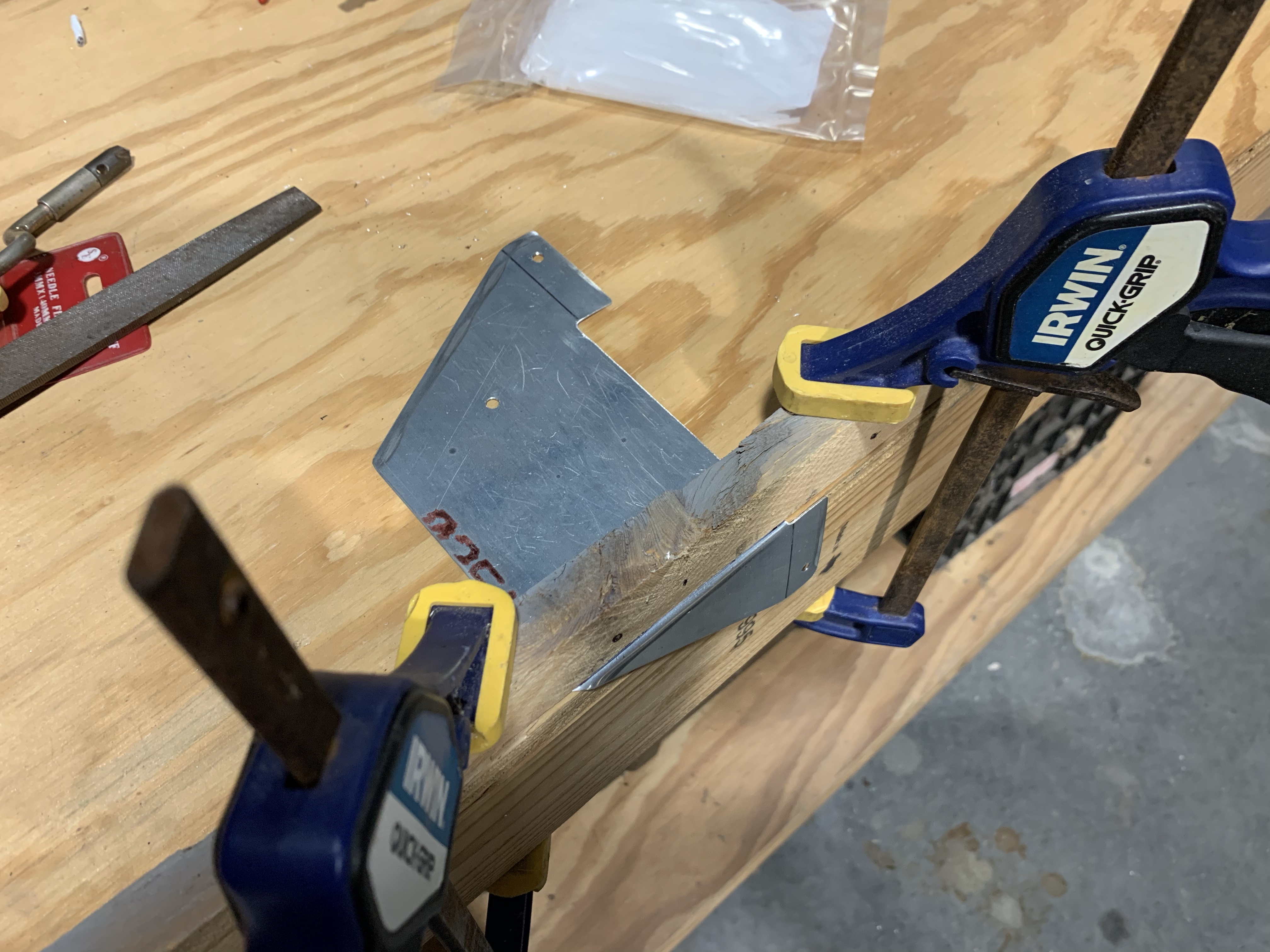 Some final tweaking with the hand seamers, and it was done. I’d intended to go ahead and screw the batteries in place, but…I need some longer 8-32 screws than what I have right now. So I had to make do with clecos instead: 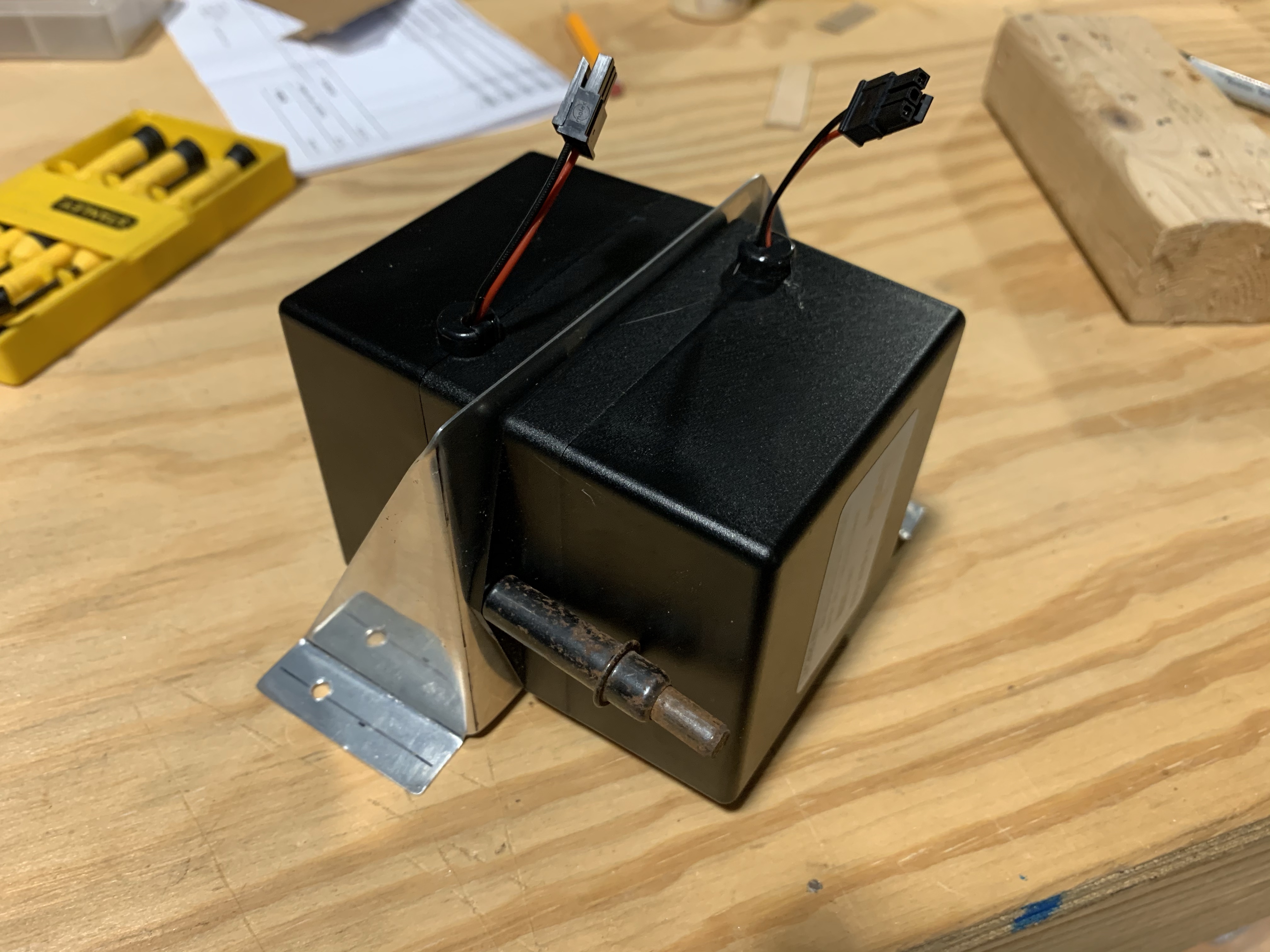 The mounting of the batteries to the piece will use the aforementioned machine screws, along with nylock nuts. That’ll be a little tedious to install and remove, but the idea is that if I ever need to service these, the batteries and mount will come out as a unit. I also like how this setup puts both wiring harnesses right on top where they’re 1) easy to access and 2) don’t take up any of the shelf footprint.

I do think I’m going to add another screw hole in each mounting tab though, now that I look at this. Otherwise I’m imagining the center web of the mount gradually abrading the shelf since it’ll probably be able to vibrate a bit. I may even go wild and cut a lightening hole in the center web to save a teensy bit of weight…

With that done, it was time for yet another Tetris session with the avionics shelf. This time I ended up breaking out some clamps to accurately envision parts that will go in the baggage bulkhead. That matters since that’s where about half the stuff may end up going. And after a bunch more shuffling, I think I may finally have a workable arrangement here: 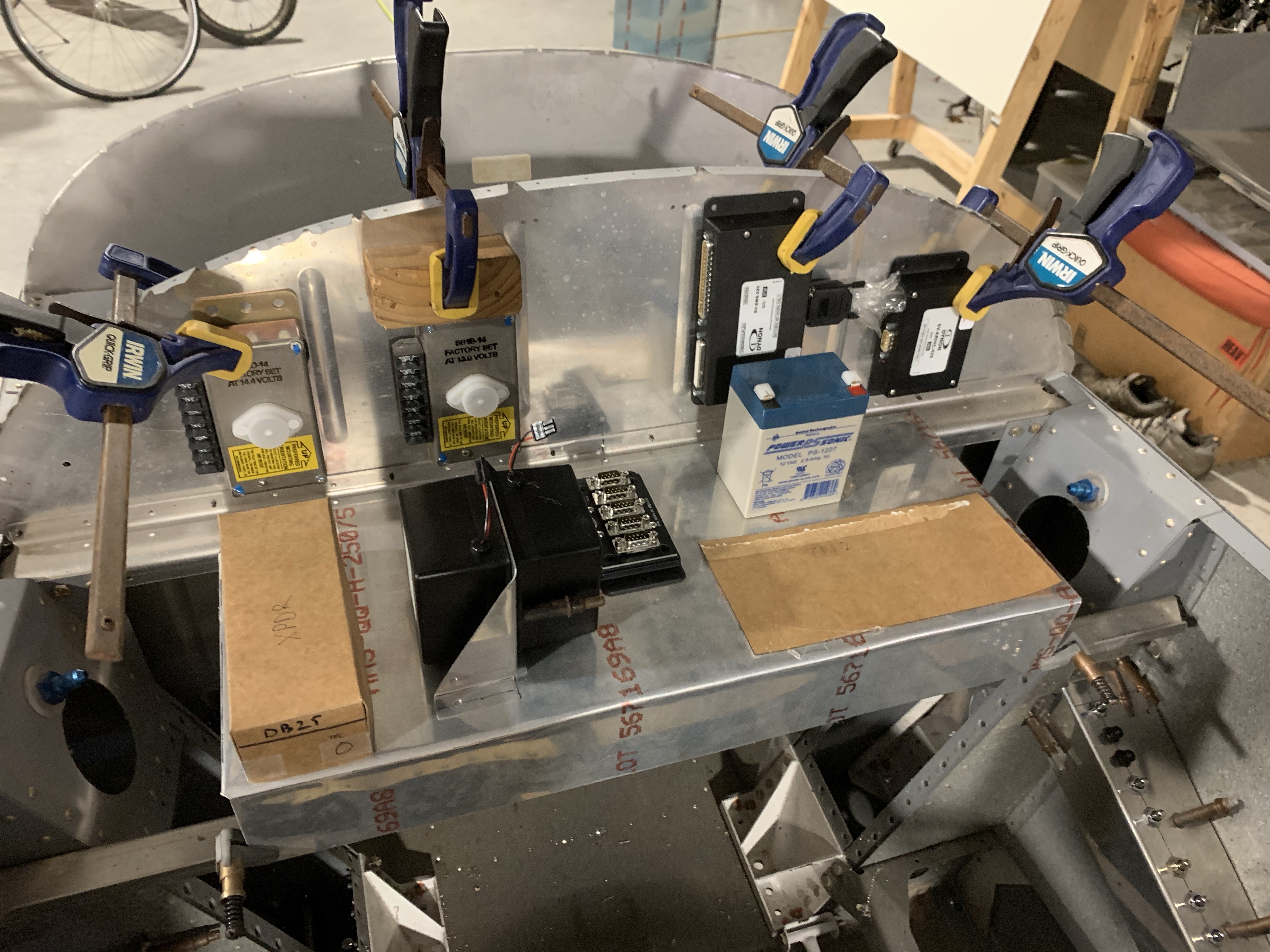 Most of my previous plans had the EMS module (second from the right on the vertical bulkhead) on the shelf, to the far left. That module presents fun packaging challenges, since it has a DB9 Skyview network connector on one side, and two more D-sub connectors (37- and 25- pin) on the other. Having it on the edge of the shelf seemed like something that might bite me later; in that same area I’ll have scat tube coming up for the fresh air vent along with the brake line from the gear tower. It seems prudent not to pack this area too tightly with giant harness plugs as well.

This layout leaves lots of rook for those big connectors, and I think overall makes better use of the baggage bulkhead space than previous ideas. There are still a couple things to consider before I finalize this. First, I really need to get my CPI2 ignition ordered so I have the real unit to play with. I’m not too concerned about the actual control module (the cardboard piece far right), but the backup battery mount may not fit where I think it will (but boy I sure hope it does). Second, I also need to consider the various D-sub connectors on the stuff in the panel, especially the displays. Which makes me think that maybe I really need to get the panel cut.