After a pretty lazy start to the day, I got right back to work scratching my chin while looking at how to arrange all this stuff under the seats. The good news was that it was simplified quite a bit by my decision to ditch the terminal strips. Now I just had to figure out where and how to mount the Flyleds control board. The board comes with four snap-in plastic standoffs that are kind of absurd in length: 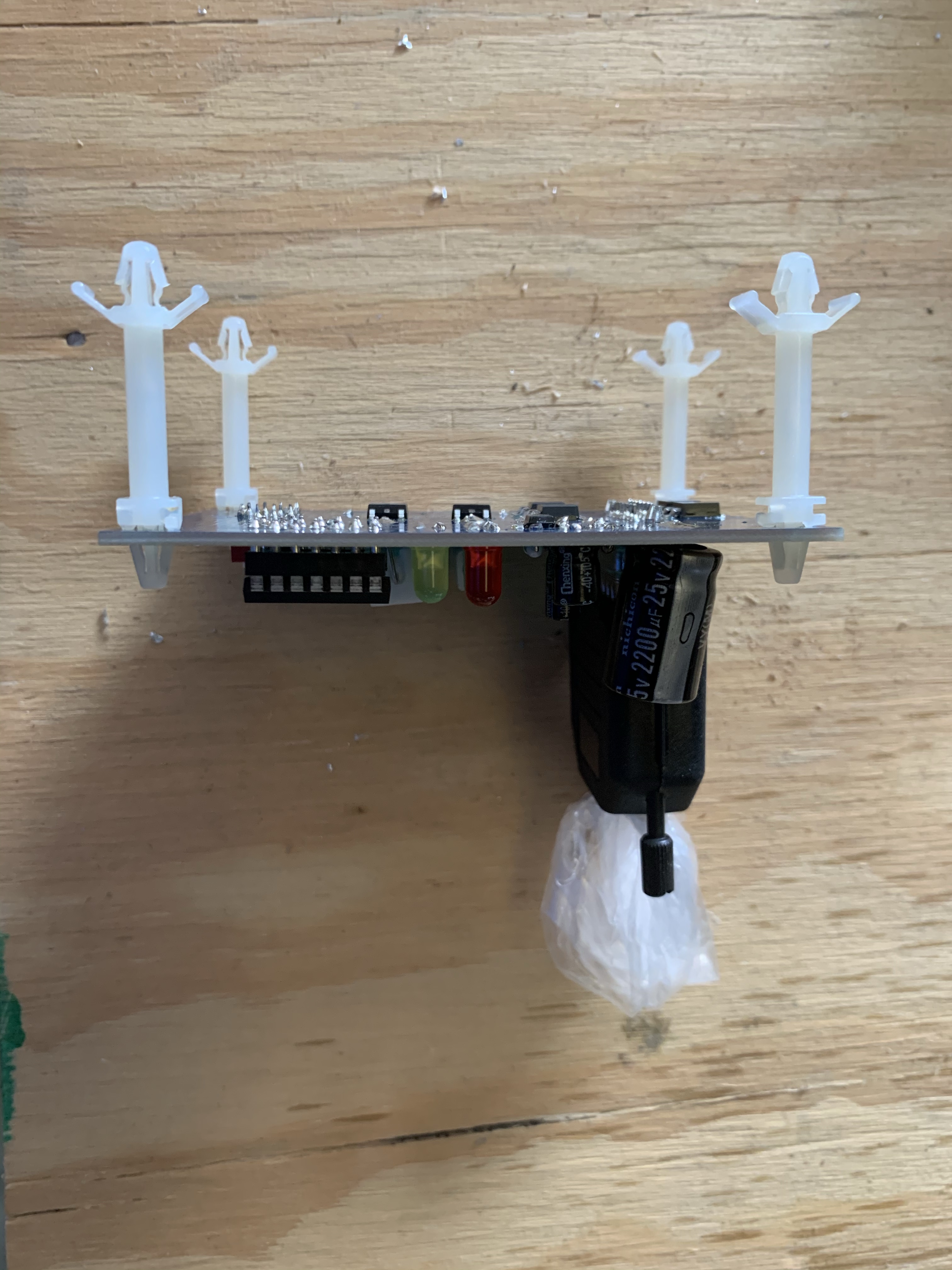 I wasn’t quite sure I wanted to use those, so I tinkered around quite a bit here. I thought semi-seriously about working out something involving machine screws and spacers, but that would have required yet another hardware order, and so eventually practicality won the day. If I invent new methods for every little thing, not only will this project take forever to finish, but I’ll go broke from paying shipping charges.

Also, one nice thing about the plastic standoffs is that the hole locations in the mounting surface don’t have to be super precise – and in fact, I intentionally made them not quite match up with the holes in the board. Since these standoffs are so long, they allow the board to move around a little more than I like. I did an experiment with some scrap, where I set the mount holes slightly further apart than the board, with the result being that the standoffs are splayed a bit and provide just bit of extra stiffness.

This also gave me something to use as a drill template for the seat rib in the airplane. I ended up locating the board on the right-side rib, facing outboard. The long standoffs mean that the location of the footwell is a bit of a concern, but by putting the board as far aft as possible, there’s no interference (I checked by putting the forward floor assembly in place with the board in there)

The vertical orientation minimizes the space taken up on the floor/bottom skin here: 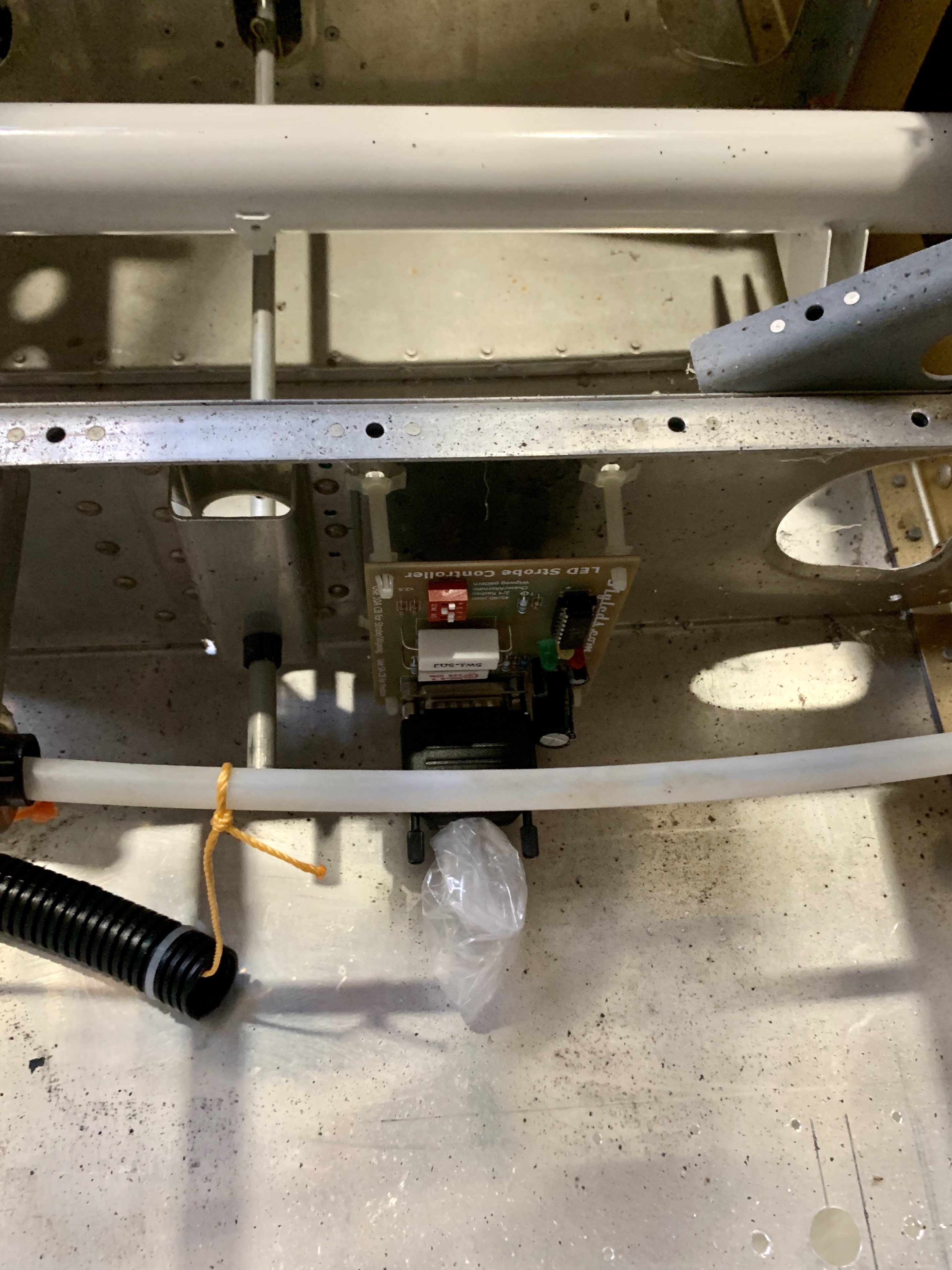 Next up, I decided it was time to address the conduit runs back to the tail section. The first order of business was to take care of the missing 3/4” hole in the bulkhead below the rear seat. I’ve probably written about this before, but for some reason there are a pair of 3/4” holes in the rear spar carry-through, but only one corresponding hole in the bulkhead aft of the spar. And getting to this location to drill a hole is challenging.

I ended up buying a hex-shank step drill bit off Amazon; this was still too large to go in the adapter for my angle drill, but that problem was easily solved by way of some home machining…by which I mean chucking the bit backwards in a drill and turning the shank against the bench grinder: 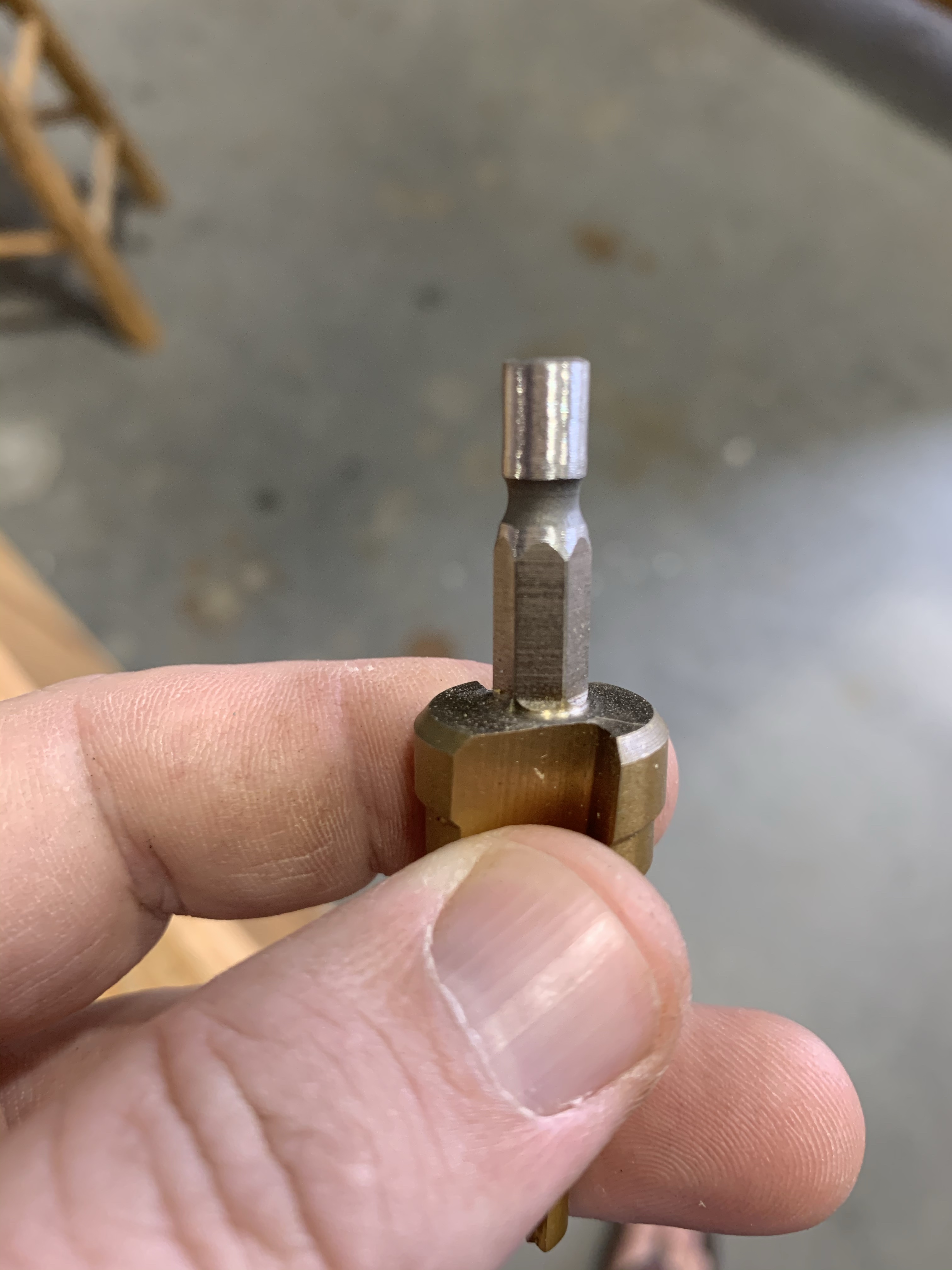 But hey, now it works in the angle drill: 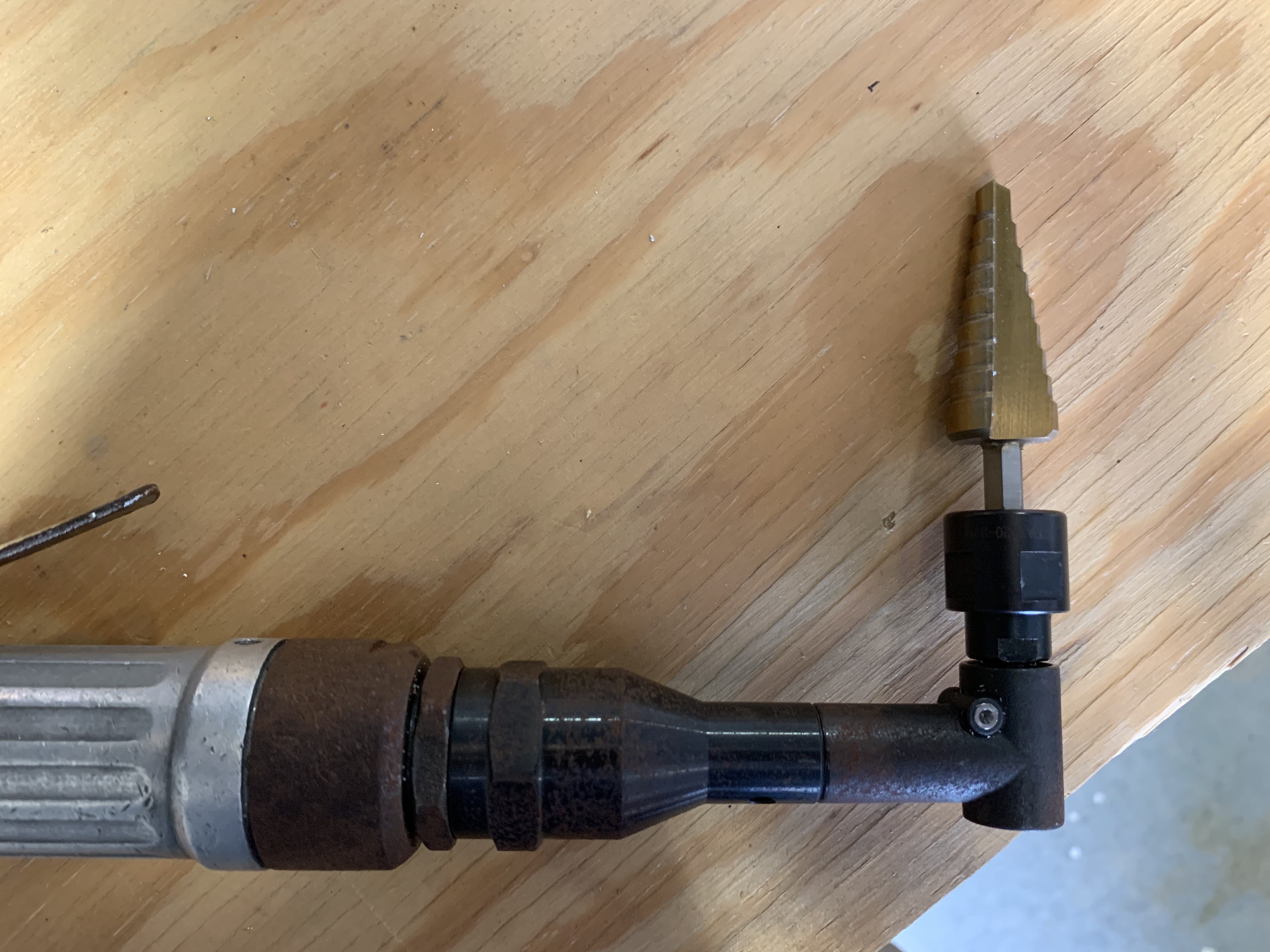 After getting that hole deburred as best I could given the tight quarters, I measured and cut my two conduit lengths, and then set about the joyous task of pulling the stuff through the bulkhead holes. This isn’t too bad of a thing when you have good access, like I did for the wings a while back, but here it was a lot more awkward. Since the conduit runs close by the seat ribs, getting a solid grip on it to give the firm pull needed to get it moving was tough. Nothing to be done but just keep plugging away, though.

With that worst part done, I got to work securing the conduit ends in place. Since there aren’t any bulkheads at either end of the conduit, I needed a different way to secure the stuff. A while back I ordered some little stick-on bases that a zip tie can pass through, and this was my first time actually using them. They came with some 3M foam adhesive, but I elected to scrape it off and use some 3m VHB stuff instead, which ought to provide plenty of long-lasting adhesion.

A close look at one secured conduit end: 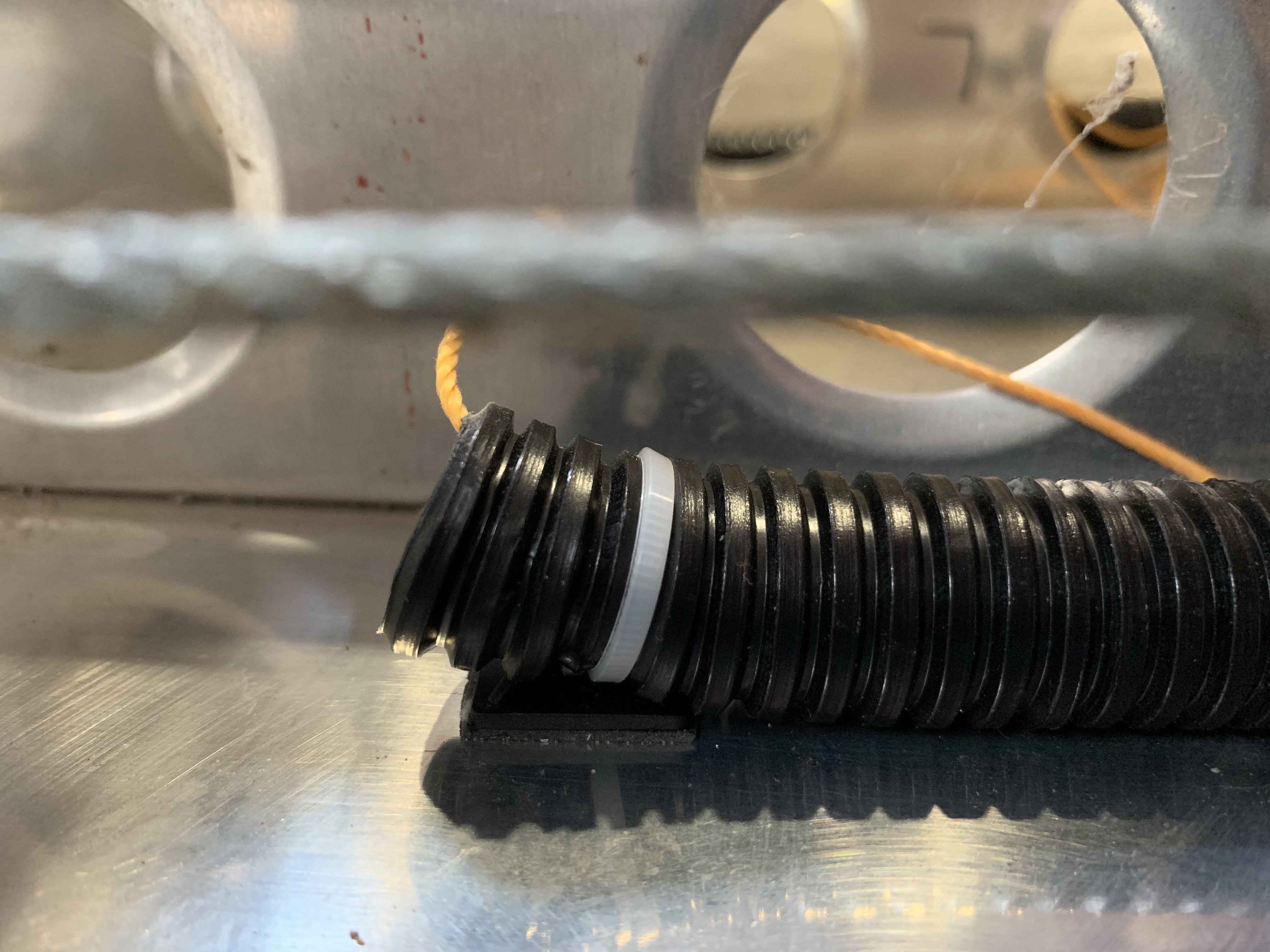 I also went ahead and ran pull strings through each conduit before fully securing them into place. When it was all said and done, I had a nice conduit run on each side of the aircraft: 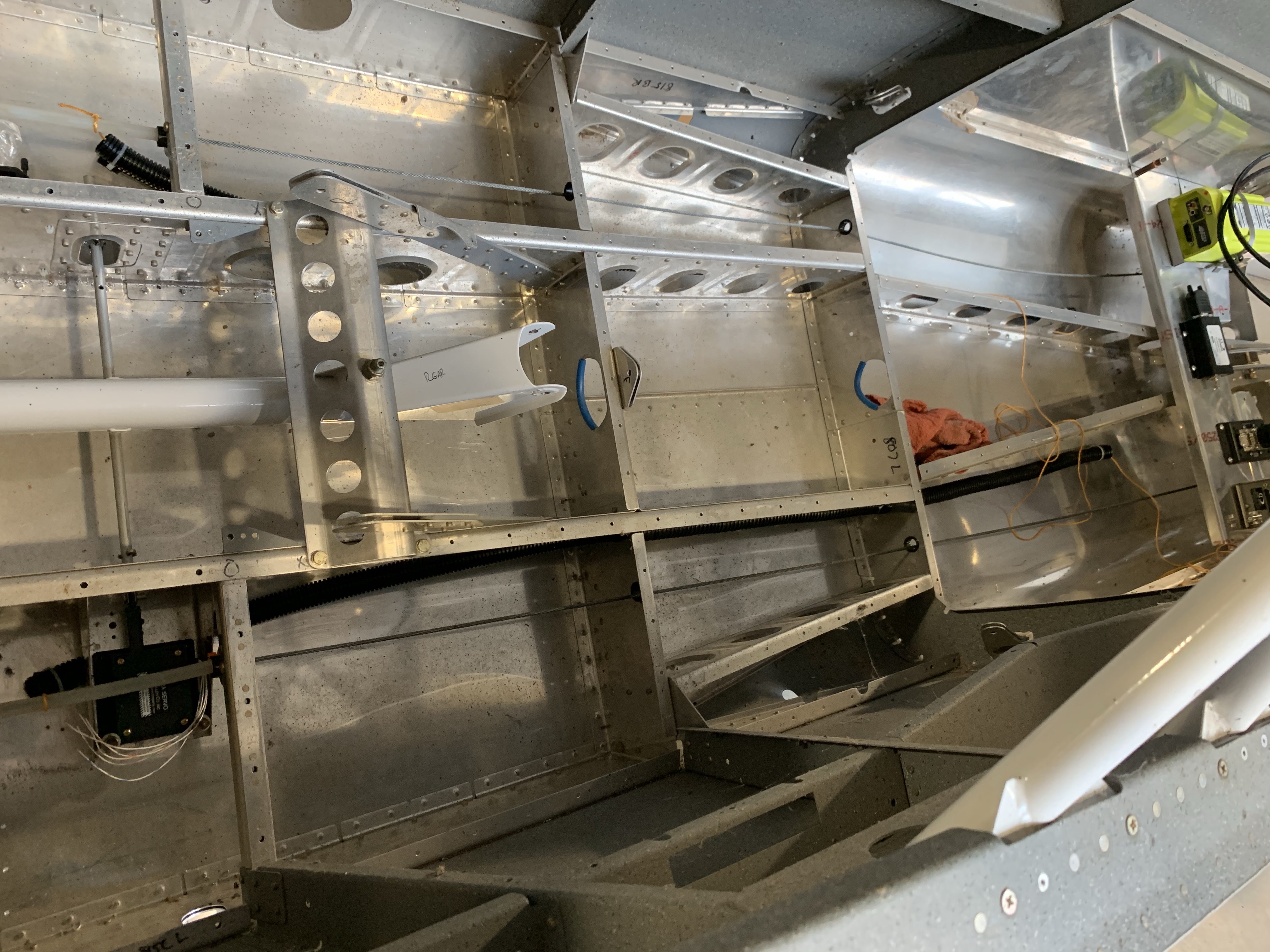 A close look at the forward ends; on the left side, the conduit ends just ahead of the roll trim servo mount, and on the right it’s pretty similar but positioned a little further outboard: 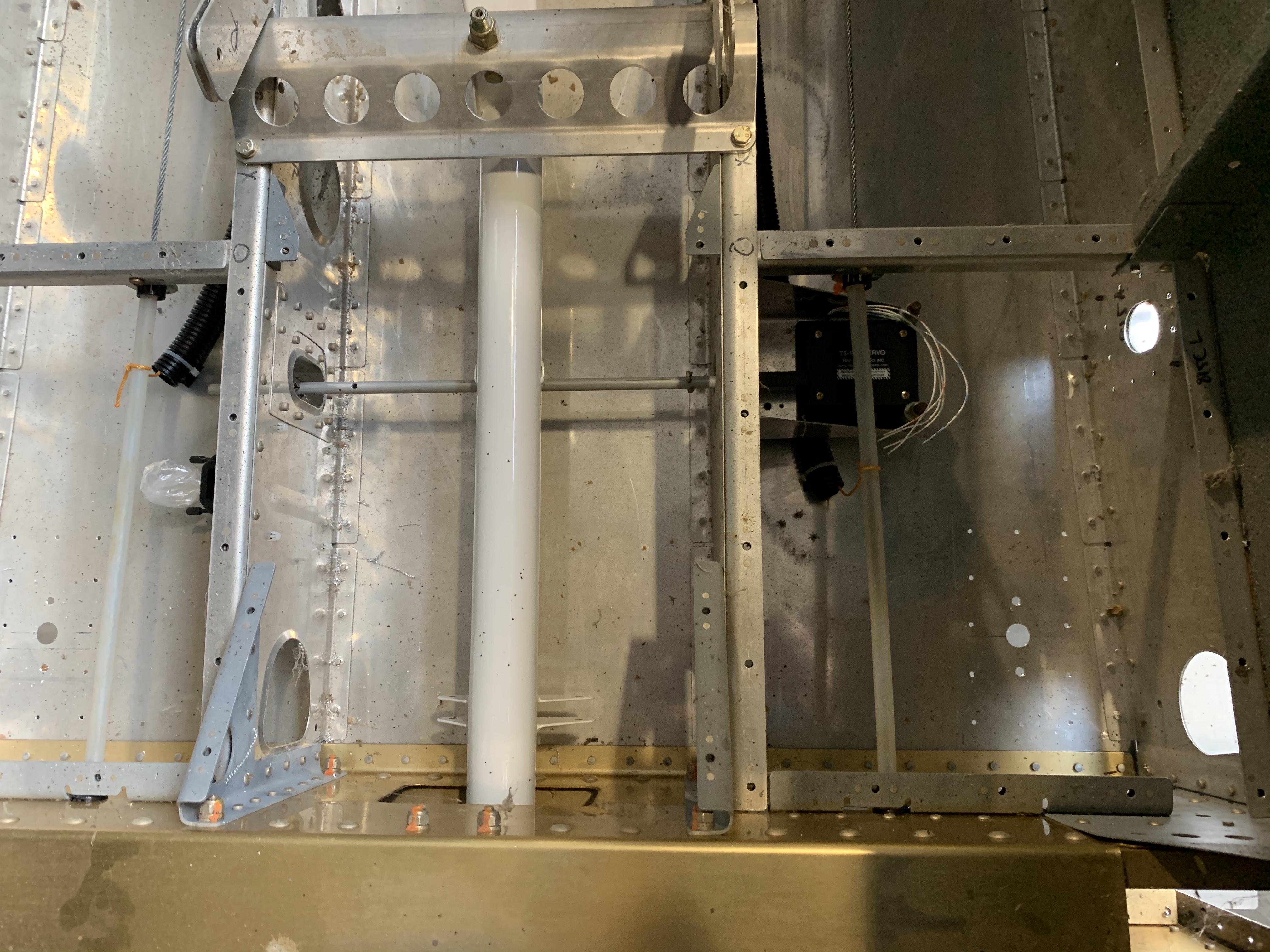 And at the aft end, the conduits somewhat follow the baggage ribs, and end just ahead of the rear avionics shelf: 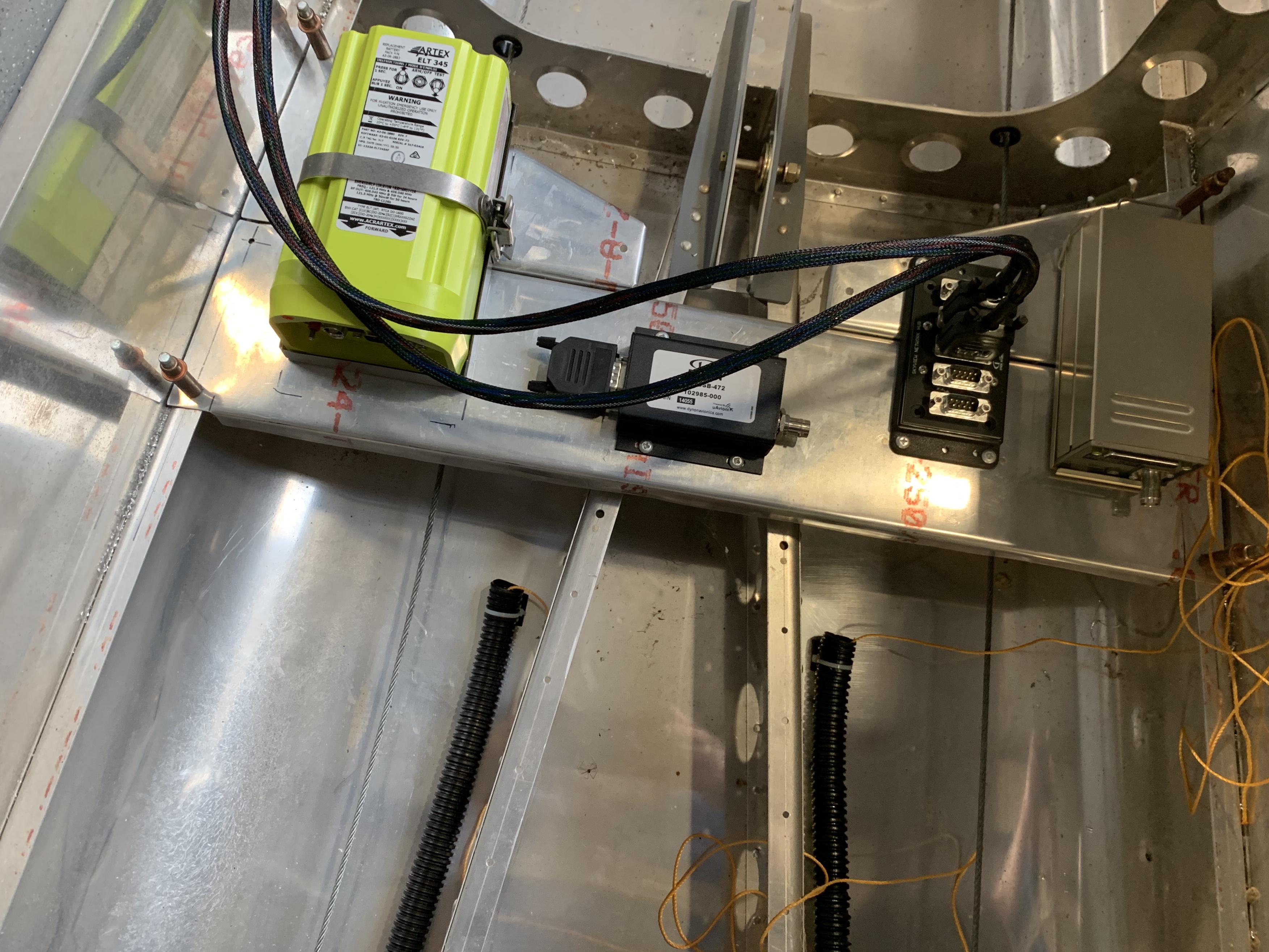 With the conduit in place, it became somewhat easier to begin visualizing the harness layout, and so I started sketching out a diagram of the harness on the large whiteboard I had nearby: 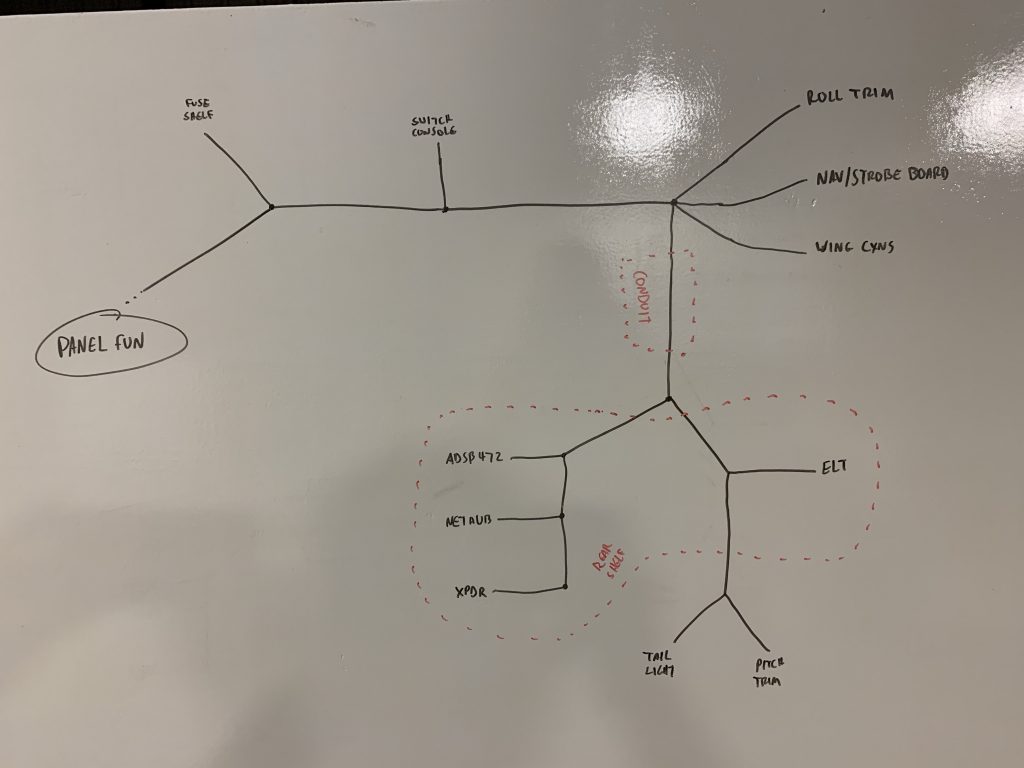 None of this is to scale at all; the intent is rather to identify “nodes” in the harness, where branching occurs. I’ll be able to use ribbons or something like that to later figure out the length of each run between nodes, which can be used to figure out the actual length of individual wire runs. It also currently glosses over what’s surely the most complex part of the whole thing, as indicated by the “panel fun” bit. I’ll need to finally settle on component positioning behind the panel before I can get that part sketched out.

I’ve seen where some people attempt to construct the entire harness outside the airplane, get it laced up all nice, and then install it. That sounds interesting, but I’m not sure it’s going to be feasible. What I’m roughly expecting right now is to get the main “trunk” of the harness – the section between the panel and the rear shelf – assembled and laced, but I expect to terminate and lace up everything else inside the plane. Fortunately most of that work will be not hard to get to (the panel area), but I’m sure it will yield some nice rats-nest photos down the line.

For now, though…I really need to pause this wiring work and get the bottom fuselage riveting done. The more stuff I put in here the less fun it’ll be to shoot those rivets, and I’ve been putting them off way too long.