Today I picked right back up with the rear shelf. I was happy with the locations of all the components there, so I marked off and drilled all the various mount holes. The one interesting bit out of all this was the ELT, whose manual insists that I should have drilled #19 mount holes, despite all the preexisting holes in the tray being obviously sized for a 3/16 bolt or screw. So I drilled them #12 instead. This annoyed me for a bit, because I thought I’d need to order yet more fasteners for this, but wait, I did order some 10-32 screws already. Good thing I bought extras in an assortment of lengths.

Anyway, there was just an extended grind of making those holes, laying out nutplates of assorted sizes for all of them, and getting those nutplates riveted. But then it was done and I got all my stuff attached. 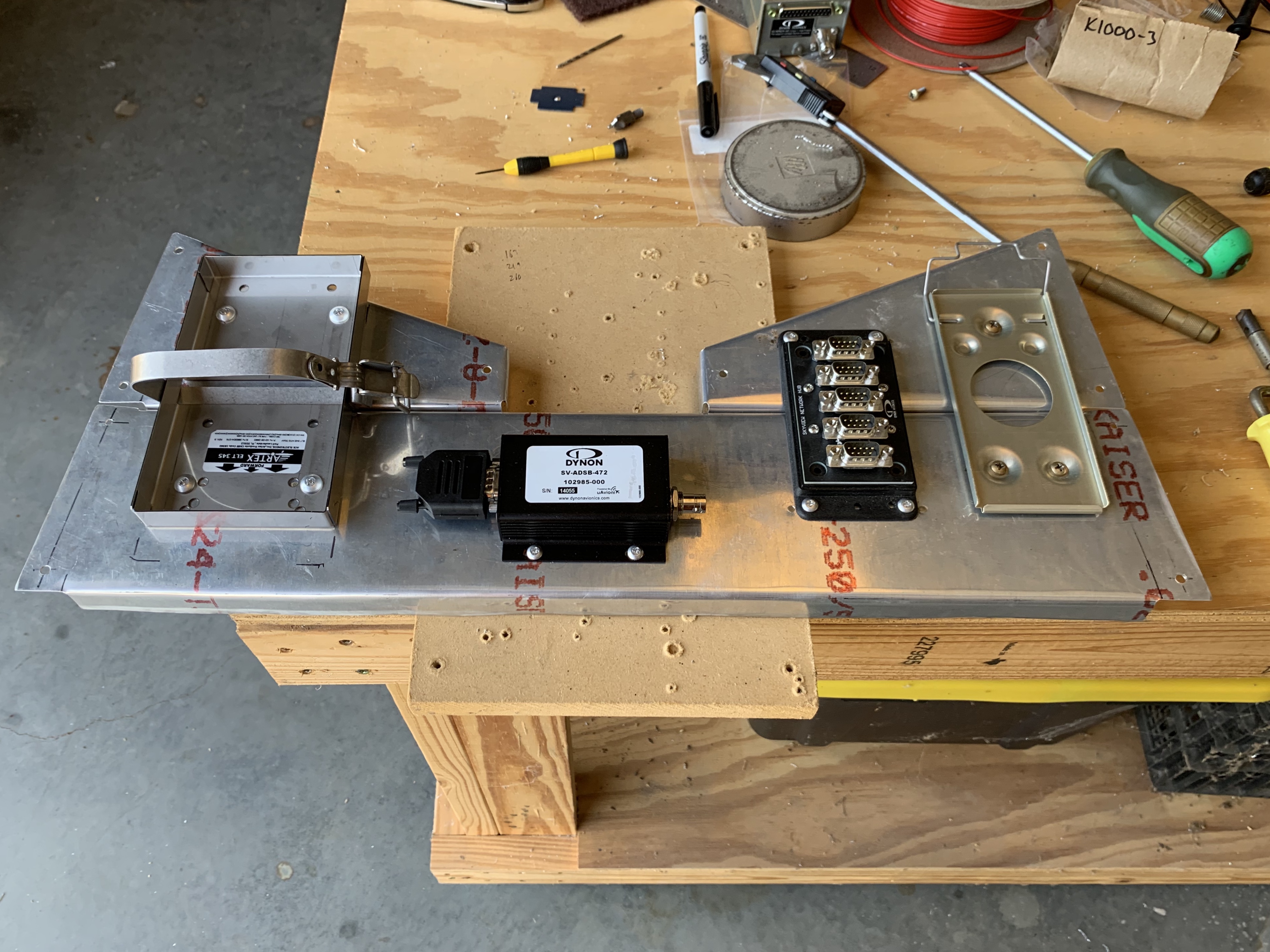 That allowed me to move on to the original thing that prompted wrapping up the shelf: the network cables from the network hub (second from right above) to the ADAHRS. This would be my first time assembling a Skyview network cable – hooray for new things! Now, it wasn’t strictly necessary to make these – Dynon sells prefab cables, and those probably would have been a time-saver – but by making my own, I can make them exactly the length I need and also save a decent bit of money.

They are a bit labor-intensive, though. Each cable consists of four twisted wire pairs (two power/ground and two data pairs), plus a ninth single wire. Here again, you can buy pre-twisted wire if you want, but I didn’t do that either. Twisting your own isn’t really that hard – Stein from SteinAir has a pretty good video on his Youtube channel showing how to do it with a drill, and it works well.

But first, I had to figure out how long to actually make the cables. One idea I’ve seen is to rub ribbons through the fuselage and use those as a way to measure future wiring runs. In this case, rather than going looking for ribbon somewhere in the house, I decided to use my huge surplus of static tubing instead. I figured it was a little easier to have this hold the expected routing than ribbon. Looks kind of ridiculous, but it does the job: 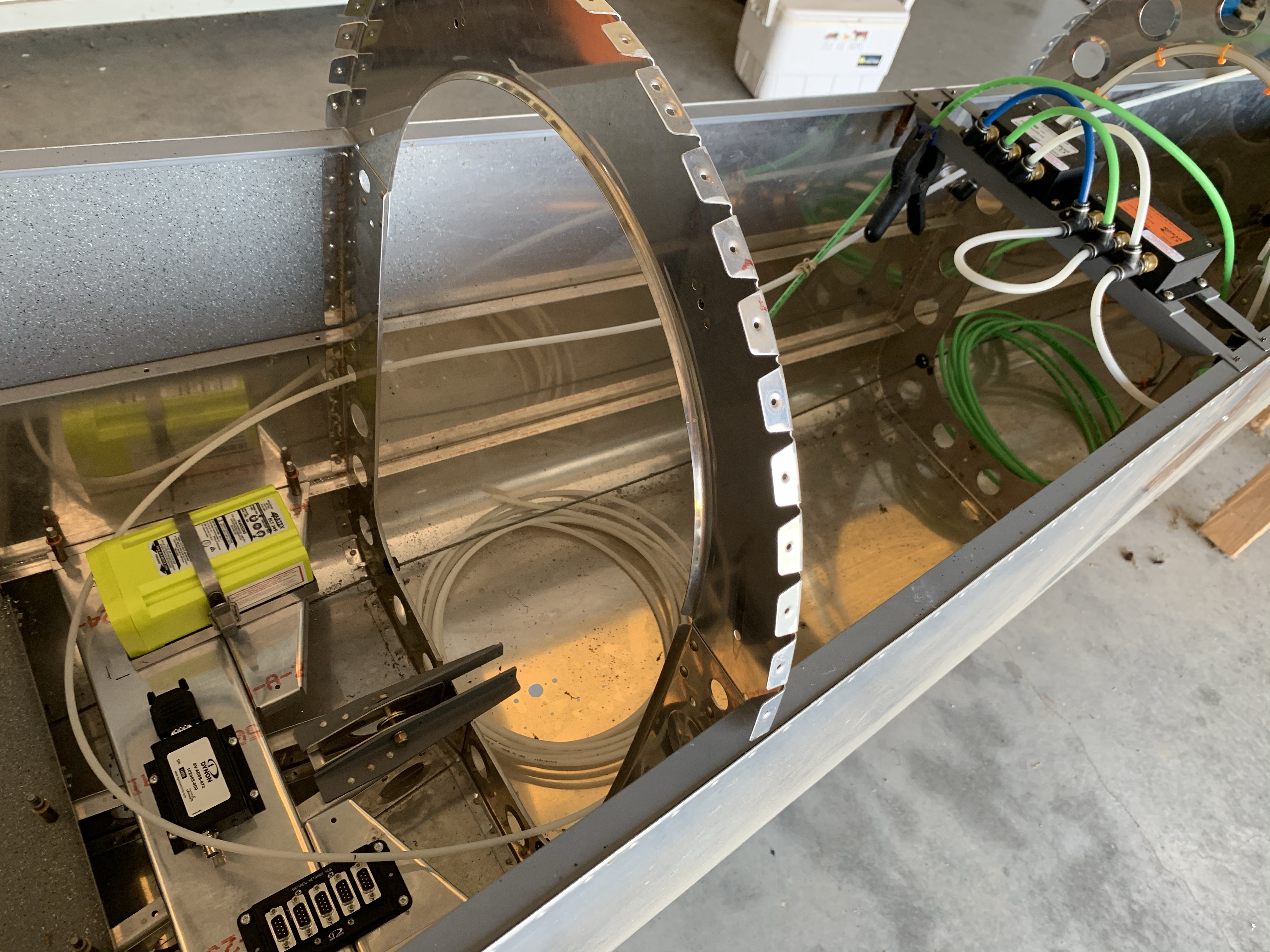 Now, the prefab network cables have each wire a different color, to properly differentiate between the identical pairs, but I didn’t want to spring for a bunch of special color wire. Instead, I used red/black for both power/ground pairs, and green/blue for both data pairs. I used my printable heat shrink to label the pairs so I could be sure to pin the connectors properly. After labeling one end of the wires thusly, I stripped each end, crimped on the D-sub sockets, and then very carefully pinned my first connector. Some heat shrink at the strain-relief point, and into the backshell it went: 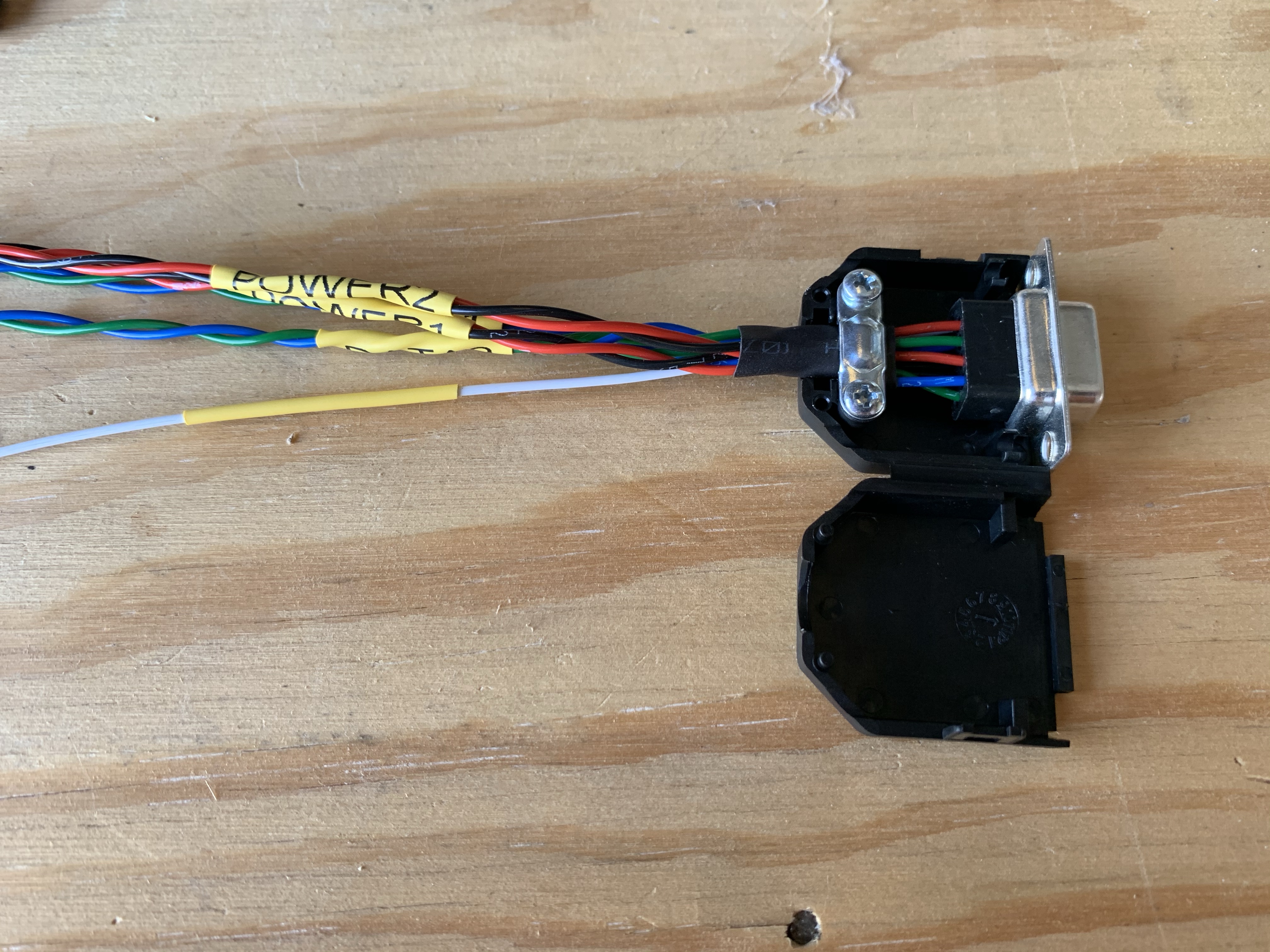 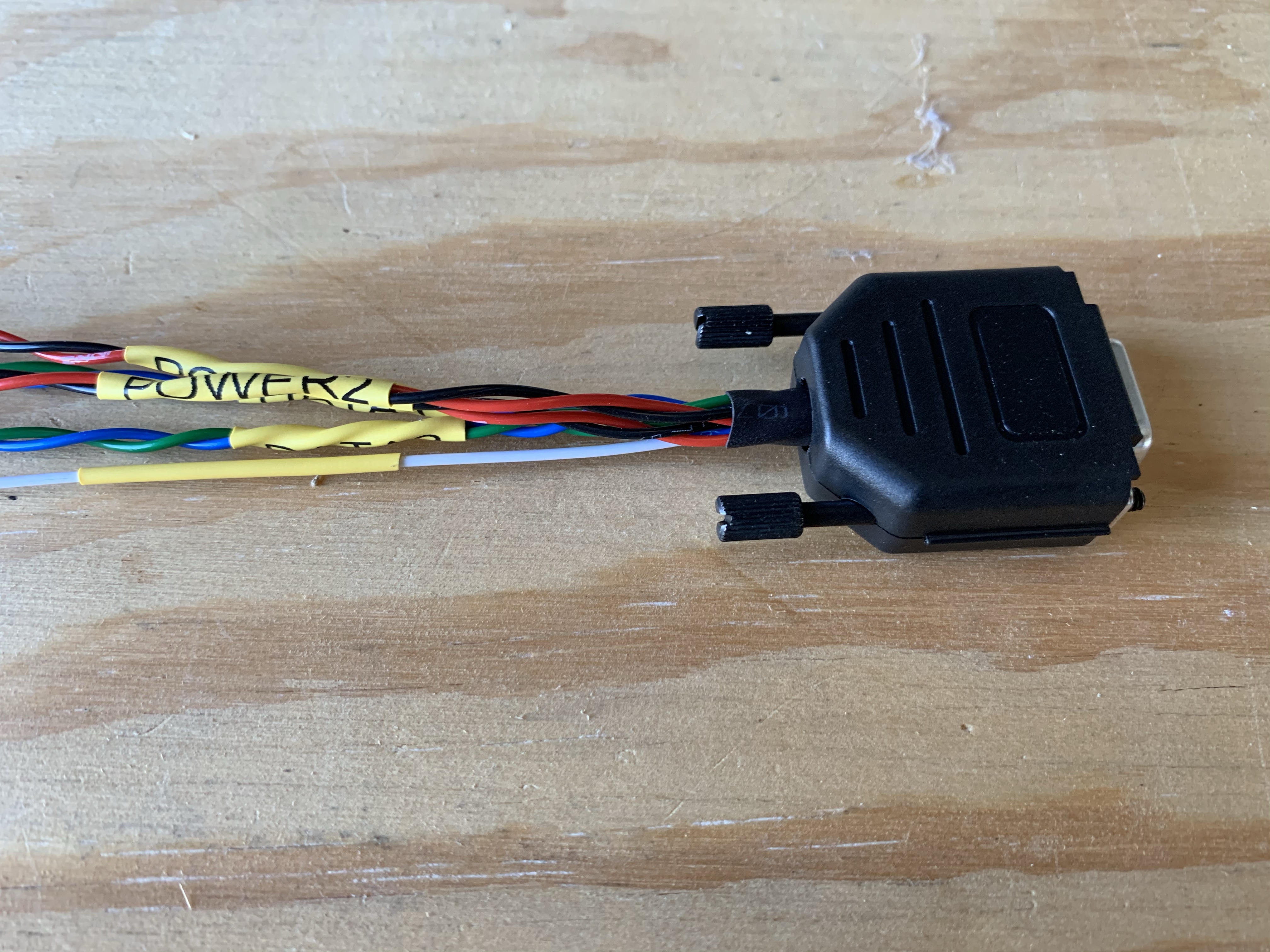 Next up was bundling up the cable. My initial intent was to go to town cable-lacing the thing, but after just a few knots, I didn’t really like the way things were laying up. I think the lacing probably works better for non-twisted wires; in this case the twisted pairs seem to just make for a lumpy bundle between ties: 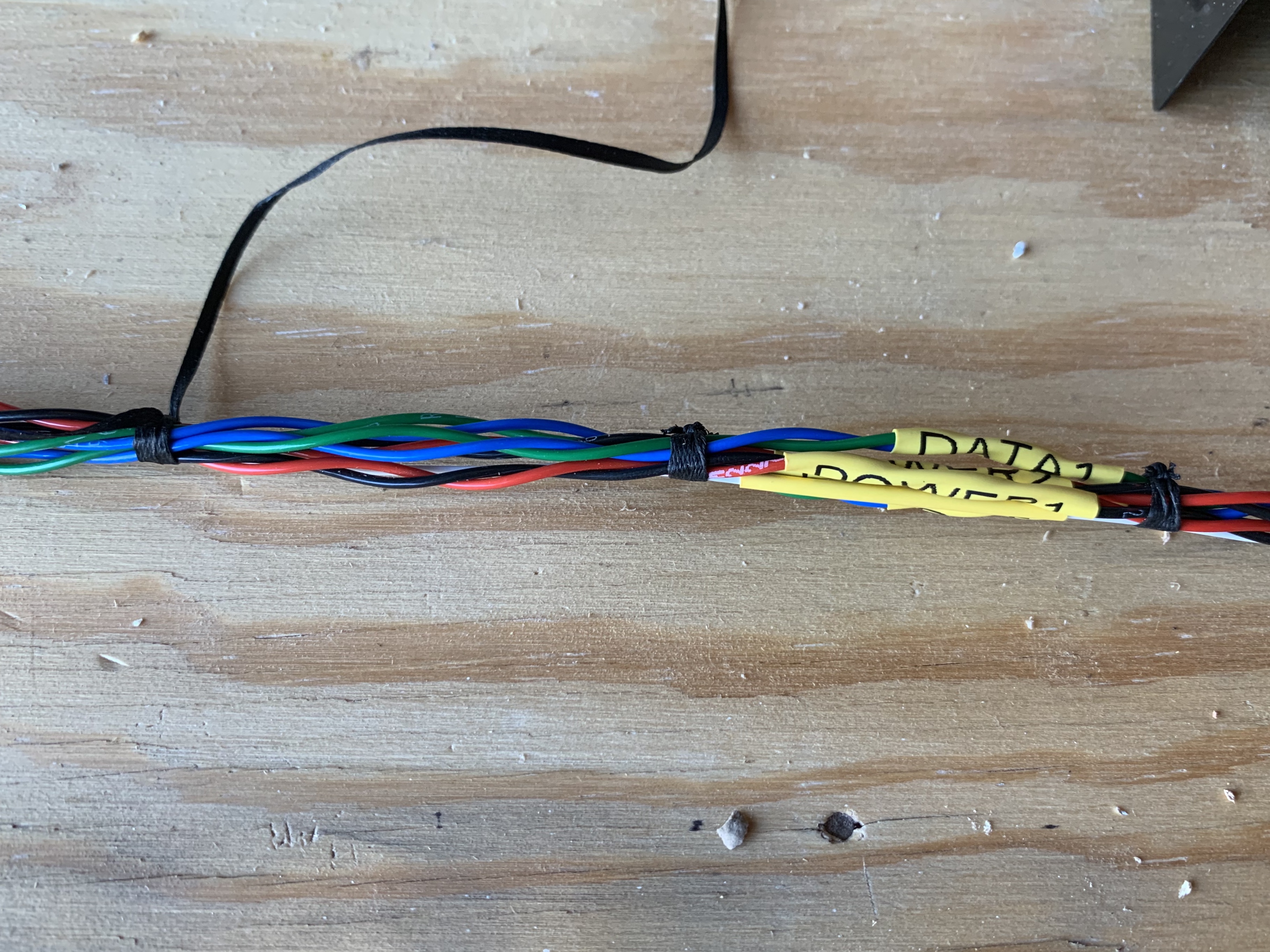 Instead I decided to use the 1/4” flex wrap I bought a while back to just enclose the entire length of the cable. This provides the sort of smooth overall finish that I’m going for, at the cost of some annoyance – getting that stuff over a bundle of wires has a sort of greased-pig quality to it. Once I got the sockets crimped on the other ends of the wires, I took it over to the fuselage and got it routed.

The question at this point was whether to go ahead and pin the other end and add the backshell, or wait until later? Leaving it as-is meant having the end of the flex wrap to possibly fray. Previously I’d imagining just having the network wires live in the larger bundle it’ll be routed with, but now that I’ve wrapped the whole thing, there’s nothing to be gained there. So I decided to go ahead and finish the cable. Later, when I pull the other wires to the tail for the tail light and elevator trim, I’ll just lace them into a single bundle in place.

But before committing to heat shrinking everything together, I tested the cable, making sure that the corresponding pins on both ends were continuous. Definitely a better-safe-than-sorry moment. There were no issues, so I finished the cable and plugged it into both ends of the run. At the moment, there’s a lot of slack, but the routing at the shelf end will be more circuitous than what’s represented here: 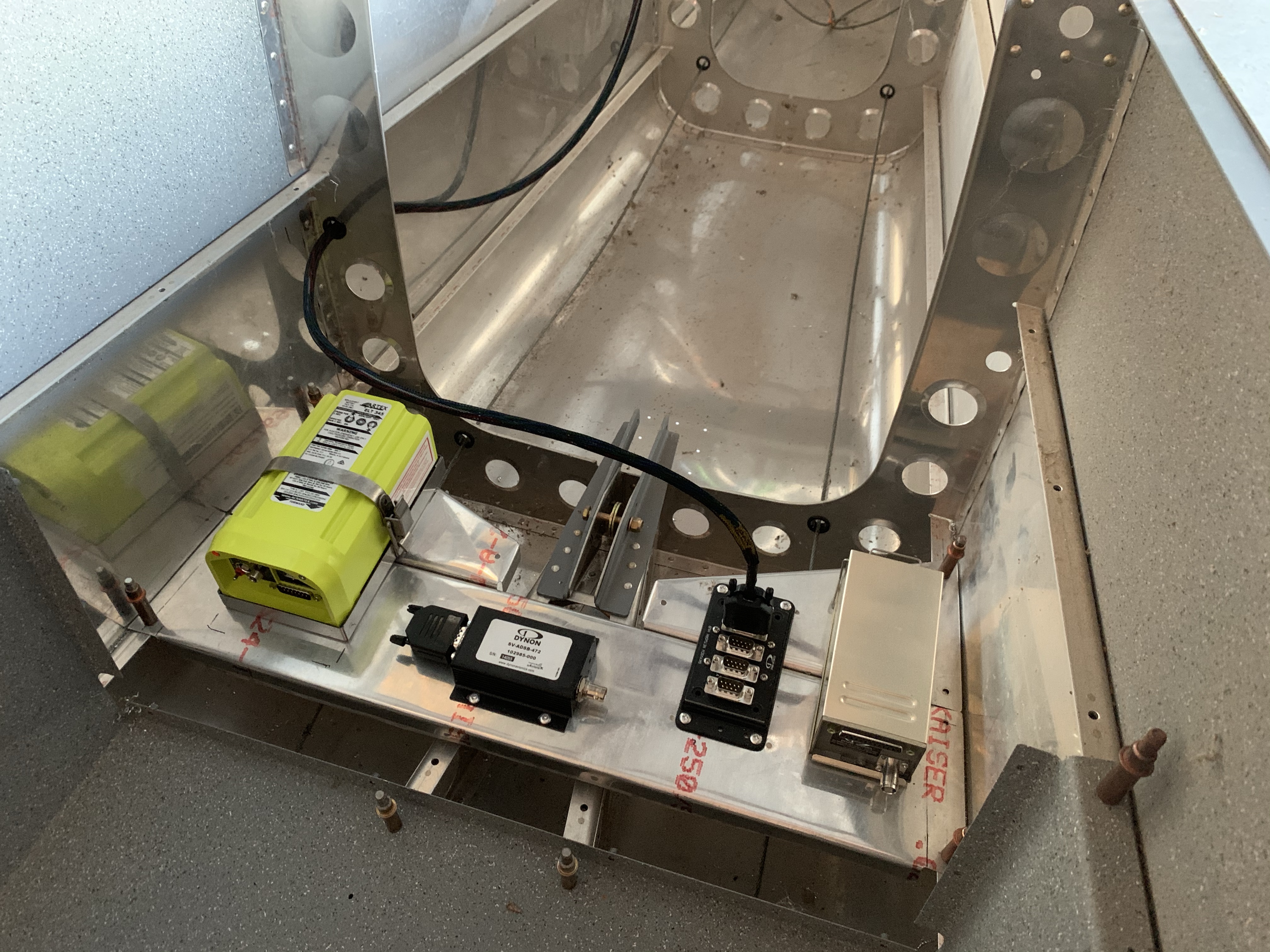 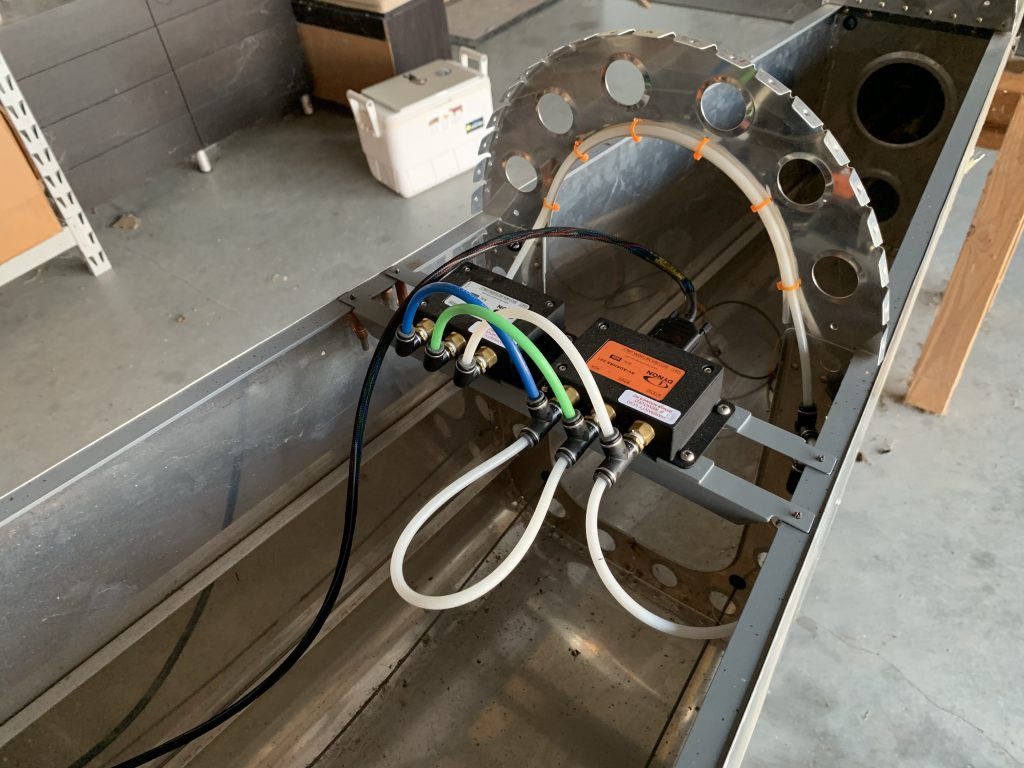 In the end, it was definitely tedious and time -consuming, but this was also my first time doing any actual d-sub stuff, so I imagine that the next cable will go a fair bit faster. One thing I’m thinking about doing is building up a couple dummy connectors to allow for easier testing of these cables. To do this one, I had to grab two unused pins and insert one into the location being tested on each end, and probing those with the multimeter for continuity. The pins were necessary because my probes are to large to go into the sockets. With a dummy connector, I could chain the individual circuits together and basically test them all at once. I’ll have to think about that one.

Next up, I get to repeat this exercise, except the next cable will be 2” shorter than the other one. I guess that’s when we’ll get an idea how much quicker subsequent cable build-ups will be. Now it’s time to go put together yet another Digi-Key order. Maybe a Spruce order too. Oh, and possibly SteinAir…so many things…