Well, it was another day of road blocks of a sort, but I did my best to get stuff done in spite of it all. I’d intended to try and get most of the switch console wiring done, though I knew going on that I had at least one roadblock. One thing I replaced in this second console attempt were the circuit breakers; when I was ordering my regulators rom B&C I saw they had mini Klixon breakers, much more compact than the ones I got from Digit-Key previously. Since I was worried about the clearance between the breakers and the side of the console, going with those was a no-brainer. The problem is, these breakers need a #6 ring terminal, unlike the #8 for the original breakers. Guess what ring terminals I don’t have on hand? Yup.

But I figured I’d at least get started on the wiring stuff anyway; I’d probably not get to the point of loading up the connectors or bundling the harness, but I could at least get some terminations done. So I drug all the assorted wires needed out on the workbench, and here I was confronted with another problem: I’ve been intending to terminate the console harness with a pair of Molex Mini Fit plugs; this was the best way to get a fairly compact connector overall, since Molex doesn’t do more than two-row connectors in this form factor.

The problem is, I saw that the current rating of those connectors was fine for everything I have, but didn’t consider the wire gauge the pins could accept. And it turns out the biggest they’ll take is 18AWG, whereas I need both 14 and 12 for the seat heater and pitot heat, respectively. I did find that there’s a Mega Fit series that will work with this wire size, so I’m going to rework my connections here into a 6-pin Mega Fit connector for the high-current stuff and a 20-pin Mini for the rest. More stuff to order…

Oh, and that still wasn’t the end of it. I also didn’t have the right blade terminals for the 12AWG wire needed for the pitot heat circuit, so I couldn’t terminate those to the switch either.

I still decided to go ahead and cut the wires that I could and crimp on the terminals needed to connect them to the switches, but that was as far as I went. I’ll have to wait until I have the rest of the stuff I need before I can turn this rat’s nest into something that looks actually organized: 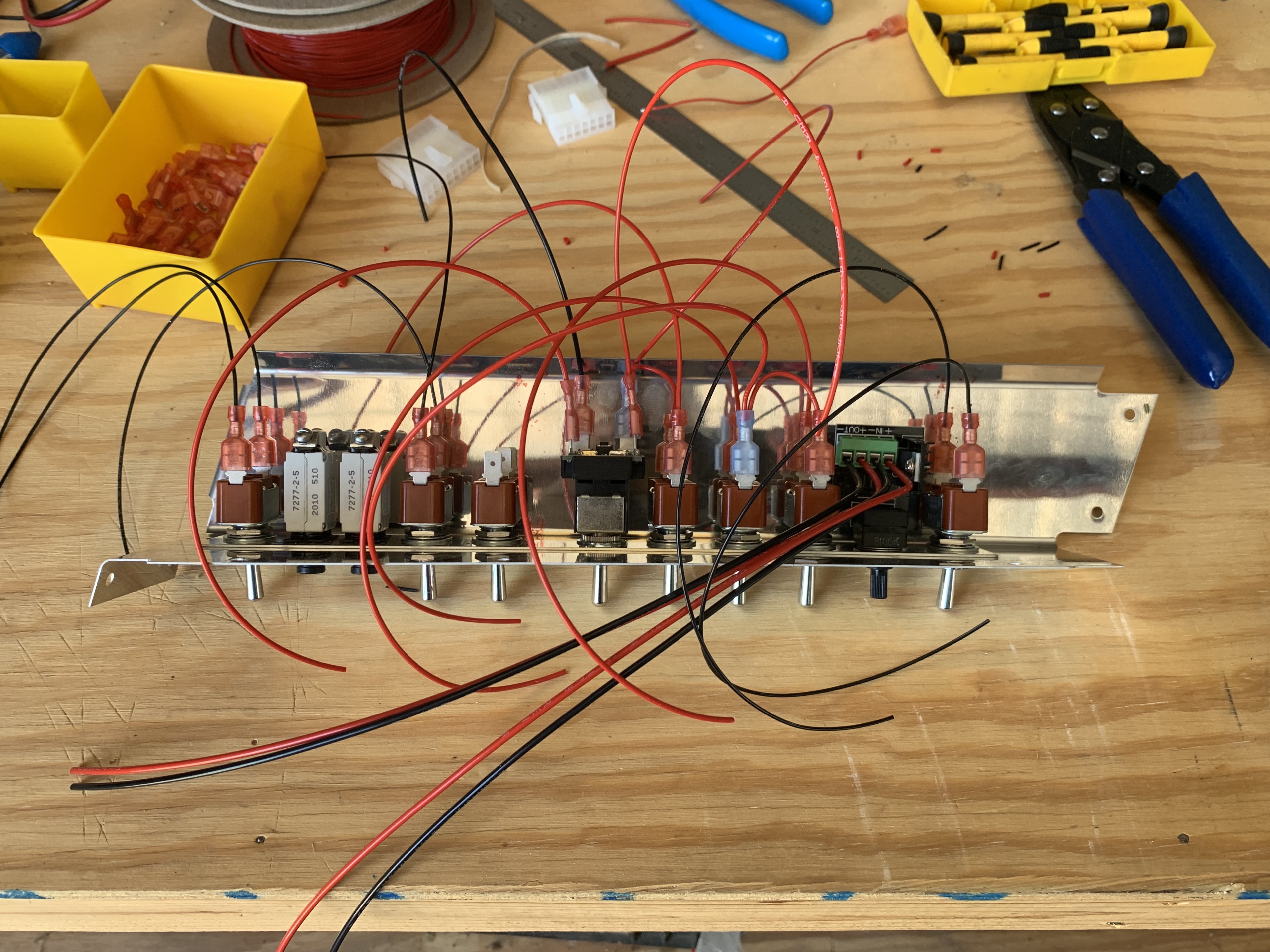 So – what to work on next? Part of me wanted to sit down and start getting more parts orders together, but I can do that any time, and maybe wait until tomorrow in case I find more stuff I need. I still don’t want to finalize anything on the forward shelf until I get the CPI2 ignition stuff on hand, but I’m quite confident I can get everything I need up there – and that means I can start finalizing the rear shelf.

What actually started me on this path was trying to think of other wiring things I could do fairly independently, and the one thing that came to mind was the Skyview network connections in the tailcone – specifically the runs from the network hub back to the ADAHRS units. I won’t want to bundle those until I have the trim and strobe runs going back as well, but I can still get through all the pinning. But first I needed to have the hub location nailed down.

Before that, though, I needed to actually make the shelf attachable. So I carefully positioned it, got the four screw holes drilled, and installed the nutplates in the longerons. Then I pulled out the pertinent components and worked on a decent layout for them – which I’d already roughed out, so this was just finalizing things. Nothing much changed here, except that I think I had the hub and ADS-B receivers switched previously. This new layout makes it easier to get tot he receiver’s harness connection, and positions the hub close to where the pitch servo will live. By doing that, I’ll be able to just terminate the wires on the servo with a D-sub, and plug them directly into the hub – no intermediate cable needed. 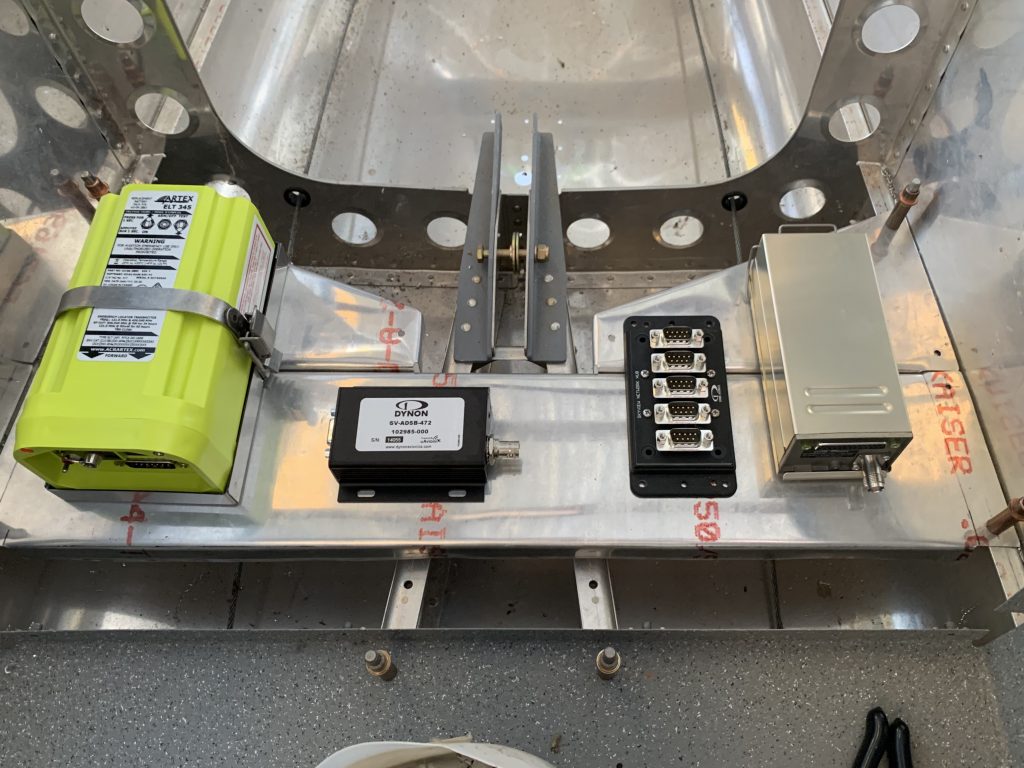 So that was pretty much today’s work – I didn’t quite get to laying out mount holes in the shelf before I had to go to an afternoon appointment. Tomorrow I should be able to get this stuff mounted and at least start on those network cable runs. And I guess place some parts orders…