So a couple weekends ago I made my first failed attempt at getting the mount holes done in the switch console. That, of course, ended in me ordering a replacement part. Well, the replacement (plus some raw stock for making a better switch retainer plate) came in last weekend. This week I’ve again been sort of dodging the mosquito population, though it’s finally died off enough that I did some evening work tonight, and I decided to pick back up on the new console.

Now, the issues last time mostly revolved around the holes in the console not lining up with the holes in the retainer plate. At the time I’d decided that when I redid this, I’d rivet the plate to the console to make sure everything lined up. In the intervening time, though, I decided that that wasn’t necessary, and would add decent complexity getting those rivet holes lined up. The real issue wasn’t so much a wandering step drill as it was my dumb decision to make those holes while holding work pieces by hand on the drill press.

So I decided to have a go at it doing it the same way as last time – drilling the pilot holes in assembly between the two pieces, but enlarging the holes to final size separately. This time, though, I’d make sure the work pieces were clamped securely while drilling. To facilitate this, I built up a sort of jig with a couple 2x4s. This made a piece tall enough for the console to sit on, and I next used the console to drill holes in the block matching the screw holes, which would allow the console to be clecoed in place while working.

Then it was over to the drill press to start opening up the mount holes. This worked a lot better than last time, and reclamping the work for each hole was nowhere near the annoyance I might have thought it was. Here I am partway through opening up holes on the retainer plate:

Finally, after making a whole lot of metal shavings and sawdust, it was all done and it was time to see if they matched up. If they didn’t, it wouldn’t be the end of the world actually – since I didn’t mess up any of the console holes (unlike last time), worst case I could make another retainer and trace the holes from the console onto it, It’d be really painstaking to open those holes up by hand, but it’d work.

But it wasn’t necessary – everything lined up perfectly this time, and I was able to get all the switched, circuit breakers, and the PWM dimmer installed:

And of course, with that done, I just had to cleco the console into the plane. You know, just to check fitment. Very important. Plus I could lean over the cockpit and flip switches like I was doing my preflight check. Also very important. 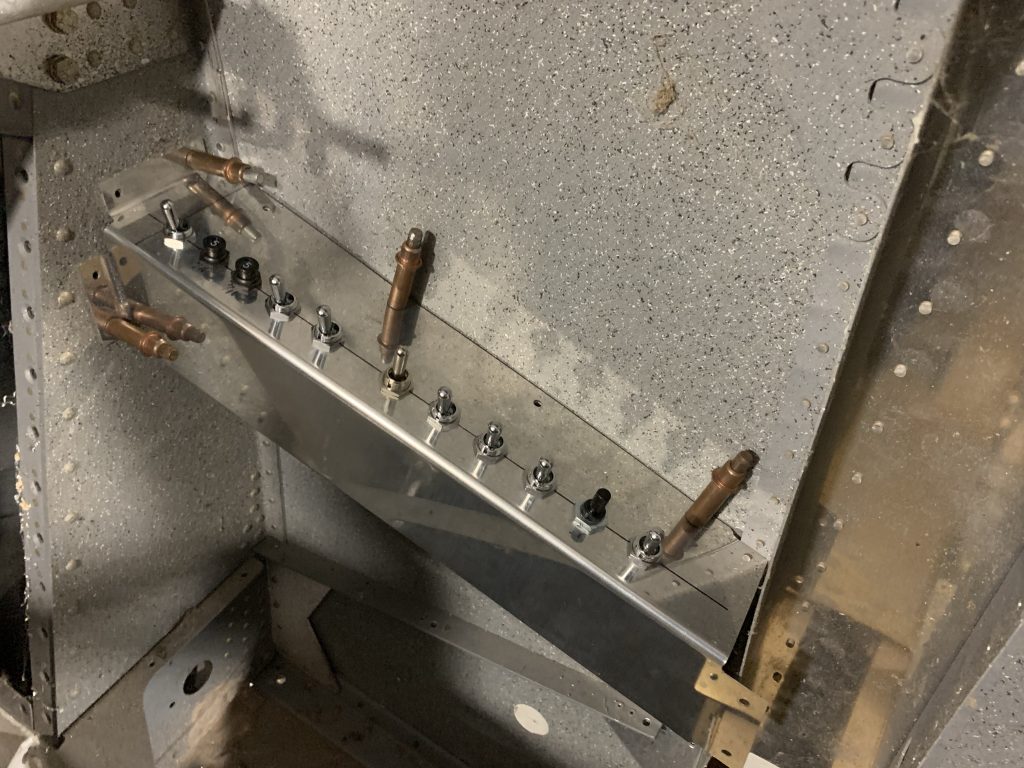 So that was a good night’s work, and it’ll set me up nicely to start putting together the wiring harness for the console tomorrow.

In other news, manic ordering of parts has continued. I got my finish kit ordered this week, mailed off order forms for the engine and my seats, and in really big news, found out from Whirl Wind yesterday that my prop is going to ship next Tuesday! That’s barely a week-and-half turnaround on something I expected to possibly take months (based on other stories I’ve heard about Whirl Wind). To say that I’m please would be an understatement, though this also means I’ve got to find somewhere to store that thing for several months.

Next up on the ordering front is the CPI2 ignition; I shot an email off to Ross at SDS today, but didn’t hear back; I’ll probably give him a call on Monday to get that rolling. Oh, and I also got both my voltage regulators from B&C this week – another component I’ve got on hand to work out the behind-the-panel stuff.