Started the day off today with some much-needed cleaning, though it had an ulterior motive as well – to clear up some good working space on my big table. I wasn’t sure whether I wanted to start mounting things the fuse block shelf, or something else, but eventually I settled on at least starting with some more harness work…which ended up being basically the one thing I worked on today.

For the backstory – these switches will be for the CPI2 electronic ignition. Since this will be my sole form of ignition, I’m ordering a dual-ECU system for redundancy. Accordingly, I need a separate power switch for each ECU. To make things more fun, each switch needs to be double-pole – the CPI2 had separate power feeds for the ECU itself and for each ECU’s associated coil pack.

That’s not the end of the fun, though. As outlined above, each switch will control the power feeds to one of the ECUs. But since the CPI2 has its own dedicated backup battery, all that will happen if the power is turned off while the engine is running is that the CPI2 will automatically switch to backup power. This is actually a good thing for preflight purposes – by turning the power off, I can test that the backup battery switchover works as expected. That’s pretty important, since losing power to the ignition means the engine goes quiet.

Anyway, the other takeaway here relates to the traditional preflight mag check, during which each magneto is switched off in succession to check that the engine will run on just one. I want similar functionality here, but as outlined above, turning the power off won’t cut it. The CPI2 does provide a function from the controller to do this, but it’d be nicer to have external switches. These could also come in handy if I ever need to cut the engine right now, ie when pulling the mixture is too slow. The CPI2 provides kill inputs for this purpose.

The question becomes how to do this. This convenience didn’t seem worth adding two more kill switches, but integrating it into the existing two switches would work well. The end result is that I bought three-pole, double-throw switches – up is power on, center is power off, and down (a momentary position) sends the kill signal for one coil pack. So the runup procedure will be to kill power to verify backup battery functionality, then pushing each switch down in succession to test individual coil packs.

Here’s the catch with this plan – while single/double pole/throw switched can be found just about anywhere, these beasts aren’t so common. That’s a concern if one of these ever craps out, since it’s a safety-of-flight item. Being stuck somewhere while waiting on a Digit-Key order doesn’t sound like much fun. So when I ordered these a while back, I went ahead and ordered three so I could carry a spare.

One final bit of fun – this particular configuration was only available with solder lugs. I would have preferred fast-on tabs (which all the other switches have), but, well, too bad. So to facilitate a possible in-the-field swap, I decided to install a stub harness on each switch to allow for easy swapping.

That’s a really long way of providing background for what I did today, which was to cut the various wire colors and gauges, solder them to the appropriate switch lugs, heat shrink over those joints, print heat shrink labels for the wires, crimp on Molex pins, and insert the pins into their connectors. Well, only 2/3 of the way for that last one…because I forgot I ordered a spare switch on that Digit-Key order, and only ordered two six-pin connector sets. Oh well, when I get the connector all I’ll have to do is insert the pins.

So yeah, this is what I got out of those three hours of work: 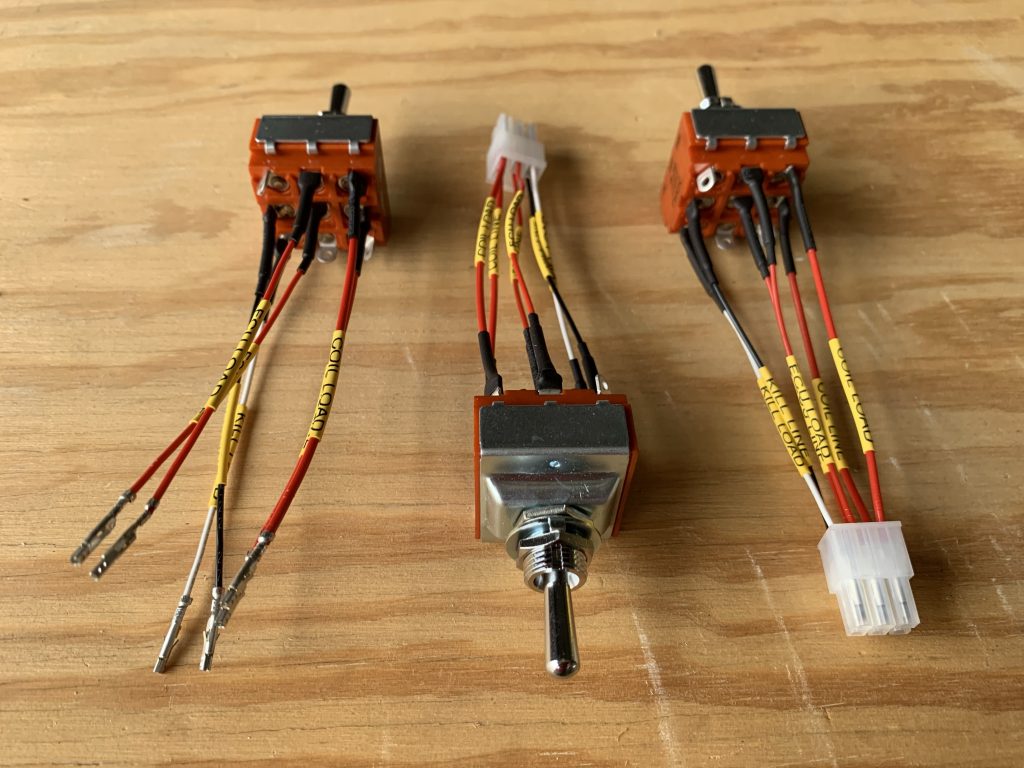