Posted on October 4, 2020 by pclifton
I swear, I’ve been trying to work this week, but now that we’re a week+ out from all the heavy rain, the mosquito population boom is in full swing, which makes being out in the hangar any time in the afternoon an unpleasant thing. Saturday meant I could finally get out there in the morning when things were a little quieter.
I will say though, it hasn’t been a dull week. I took the time to start pulling the trigger on a lot of big purchases, specifically stuff whose lead time I was worried about. I now have my order in for a Whirl Wind 300-72 prop, and I just need to send in my order forms to Titan for my engine and Van’s for my finish kit. I also hit up the three popular interior vendors, and will probably be mailing off that order form early next week as well. Finally, I’m waiting on some information from Titan so I can send my order to SDS fo the CPI2 ignition system – which I want on hand so I can finalize the avionics shelf stuff behind the panel. Oh, and I also ordered and received my ELT this week, and hopefully should get my voltage regulators from B&C in the semi-near future.

This should take care of all the long lead-time stuff, the things that have the potential to stop me from making steady progress into next year. I think the only thing I still need to find out about is my exhaust from Vetterman. I saw some comments on VAF this past week that imply they may be pretty busy right now too. I note that Aircraft Spruce sells some Vetterman products, but I don’t think they have the specific exhaust I want – as far as I can tell, they stock the two-pipe crossover systems, but I want the four-pipe, which should make the cowling a little less busy. Guess I’d better reach out about that next week too…

Anyway…let’s talk about this weekend. The Spruce order I received this week included the small snap bushings that I needed to work out the wiring issues with the landing lights. I mentioned this a while back, but to review, the Flyleds light units have two sets of terminals: the taxi-light terminals are on the back side of the light unit, but the landing-light terminals are on the front. I was stuck a while back on figuring out how to route both those pairs of wires to a single plug, while still allowing the light unit to be removed from the mount. Basically, I needed a set of wires to pass through the light unit.
What I worked out was to add a tiny hole in the edge of the light unit, outside the actual printed board area, with a snap bushing, and then to modify the mount to accommodate this. Getting this done started with a whole lot of careful measuring, thinking, marking, reconsidering, and so forth. I didn’t have a lot of margin outside the circuit board area to get this done, so getting this right was pretty important.
But eventually I was satisfied and drilled my nice little 1/4” hole, which can be seen below. Note the circular line just inside the hole and outside the terminal; this is the edge of the “safe zone,” ie the area I really needed to make sure I didn’t breach: 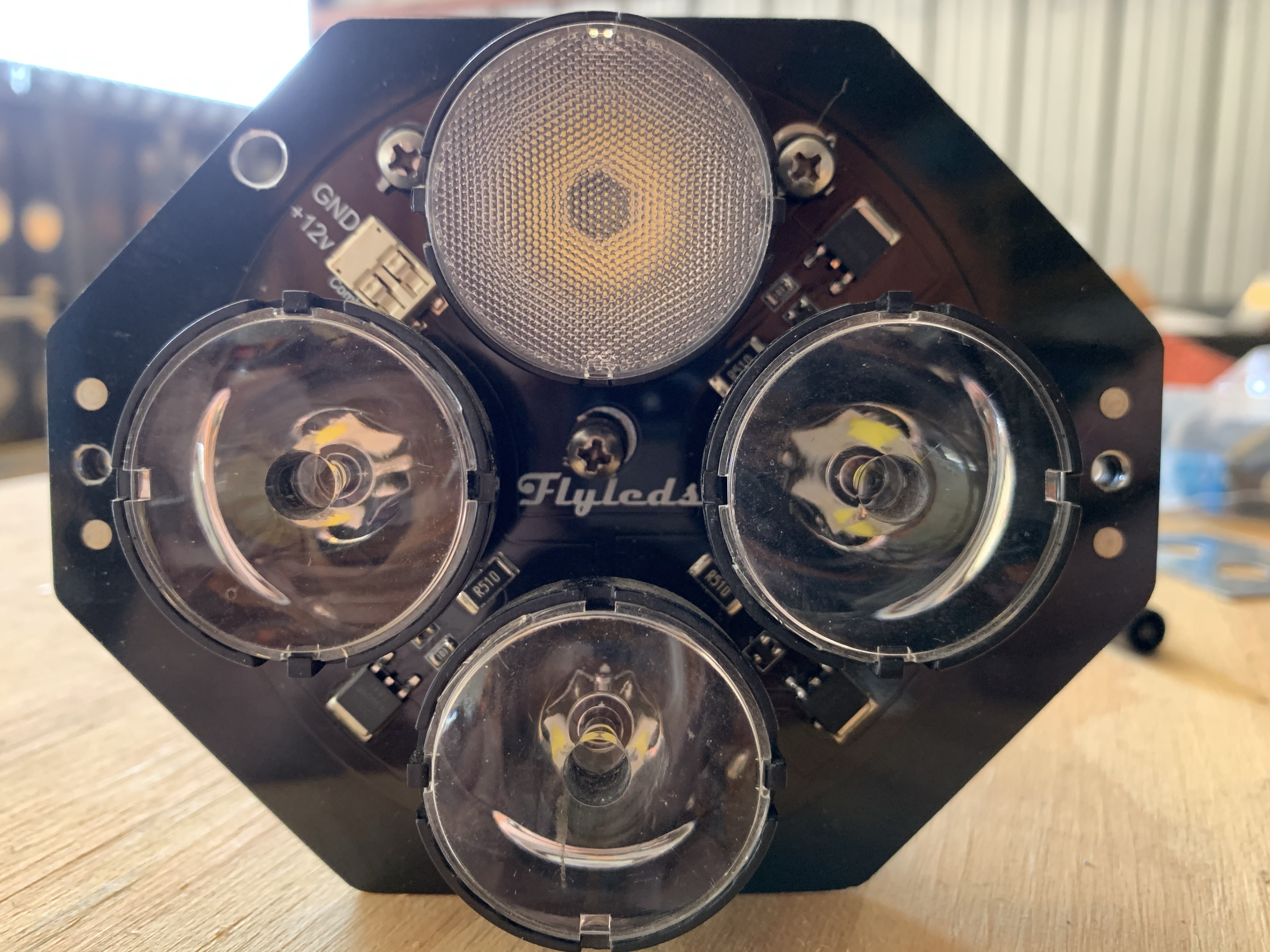 Next up, I needed to adapt the mount to accommodate this hole and the snap bushing. I started by screwing each light in place, and using the hole to trace a starting point for the mount modification: 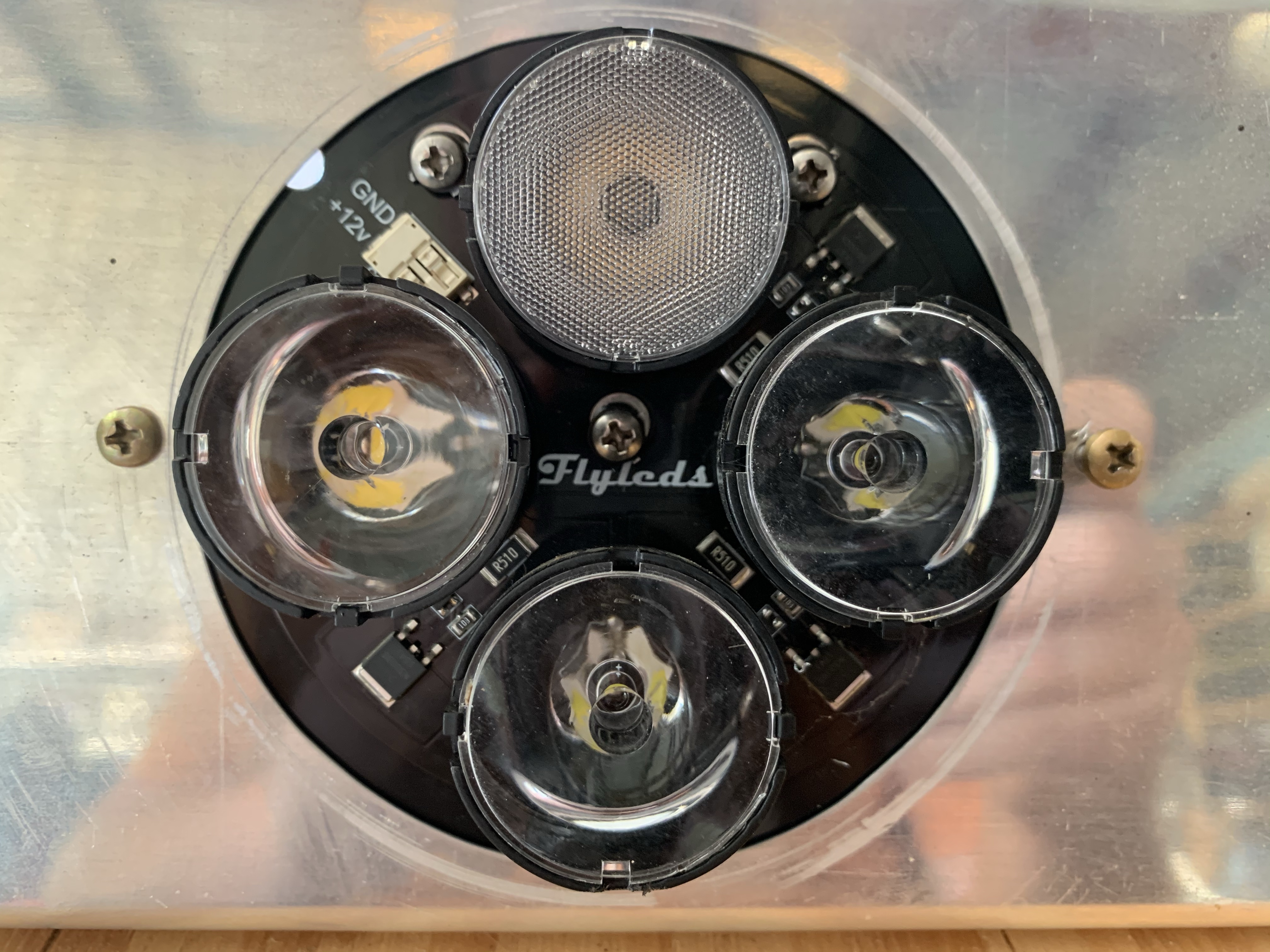 That was followed by a fair amount of trial-and-error, trying to remove just enough material to clear the snap bushing. It took a bit, but eventually it all worked out: 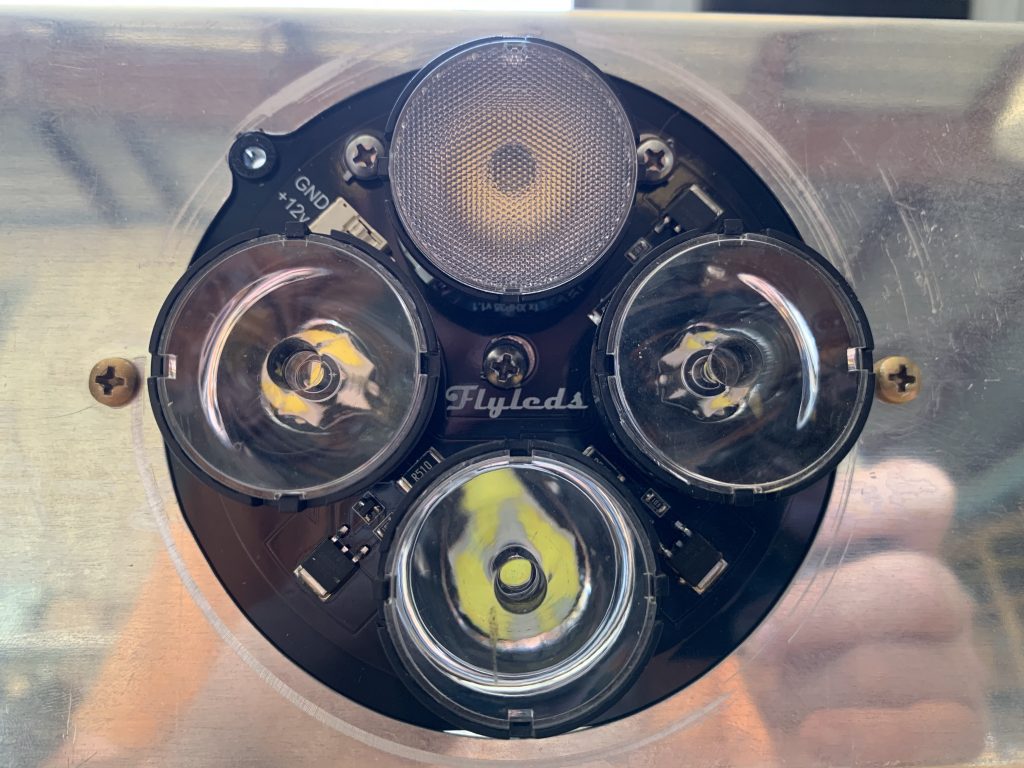 Next up, I went to work adding the wiring pigtails, which will stretch to the outboard rib and mate up with a connector from the main wiring. Here we can see the power and ground wires for the landing lights, going into the snap bushing: 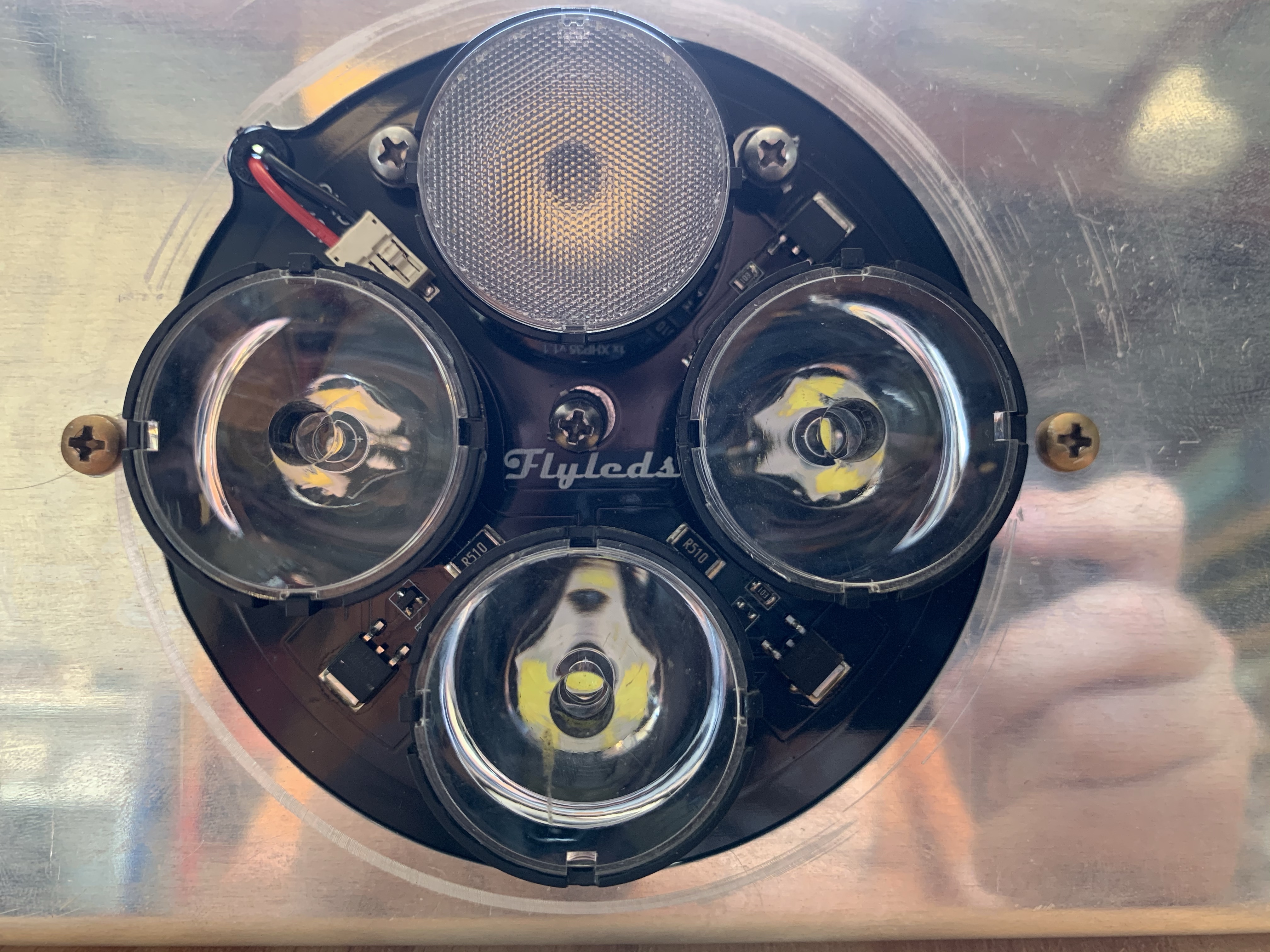 Then, from the back, we have the wires from the taxi light. These wires pass through a sort of tight space between the two pieces here, which got me worried about chafing, so I added some snakeskin wrap and secured it with heat shrink. The unwrapped wires are the ones from the landing light: 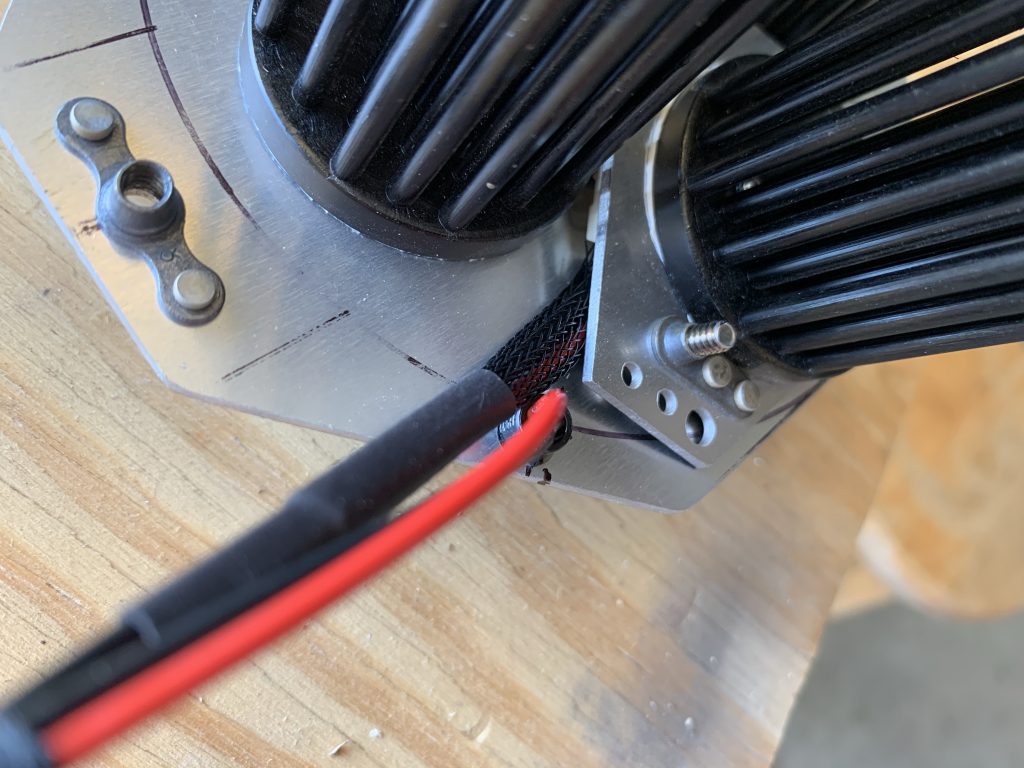 Each stub harness was then finished with a four-pin molex connector. This was really my first chance to use my printable heat shrink, which I’ll be making extensive use throughout the aircraft. I also got to work on my cable lacing chops a bit – the job I did on the pitot heat harness a while back was kind of so-so, but I found a nice technique video on Youtube that helped me do these a lot more efficiently and cleanly:

And then it was time to put these back in their box…again. I moved on to one detail I glossed over for the lower shelf (where the fuse blocks will live) – I needed to secure the two hinge pins. Nothing really fancy here; I cut two hinge eyelets, added a strip of sheet to tie them together, then located and added a nutplate in the bulkhead for the retainer to tie into. Now my shelf hinge pins are properly secured: 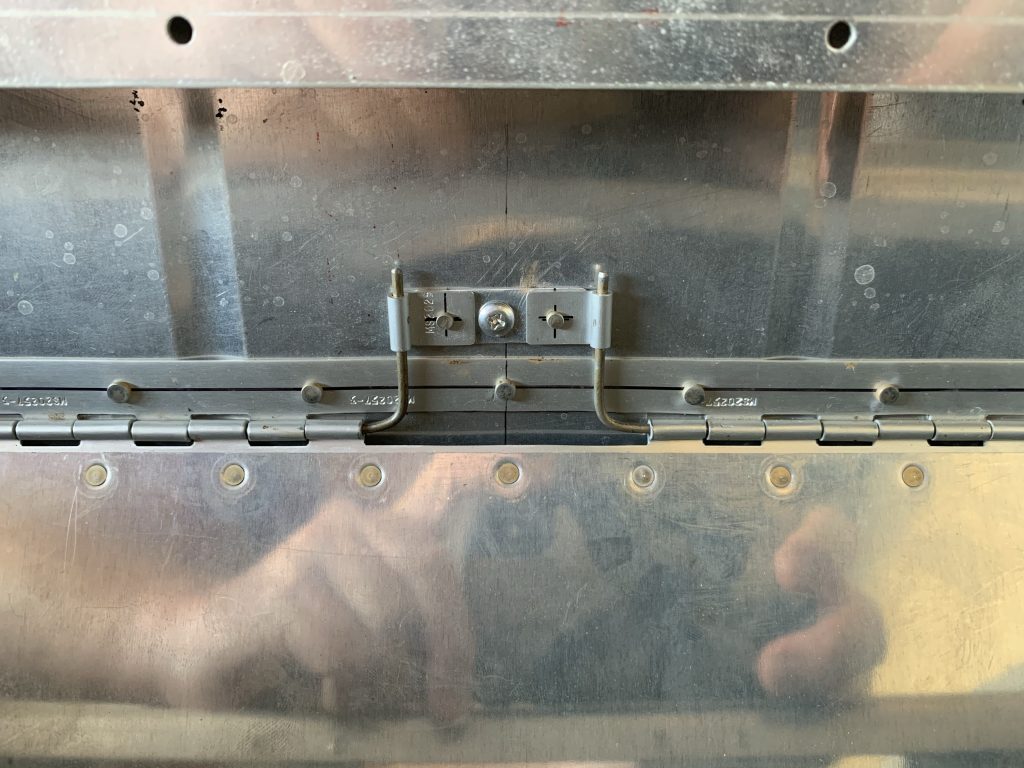 It was about this time that the invading mosquito force started ramping up, so I made that quitting time. I’m kind of thinking I might go ahead and mount the fuse blocks and other stuff to this shelf, maybe even start tying together the components that don’t require external wiring. Except I think I need some of the heavier-gauge wire to do that. Guess I might be making another order for stuff this week. I’m starting to think that shipping charges might make up 5% or so of the total build cost…