Once again, it’s been one of those days when all the effort seems to be mental, and very little happens from a physical standpoint.

One note from yesterday: after doing some reading, I decided against my idea of temporarily mounting the left wing so I could locate the conduit penetration. Sounds like that would be at least a three-person job, and I’m not sure the benefits would justify the effort and risk – besides, I don’t think there’s real reason to do it right now anyway.

To start the day, I decided to evaluate my idea of going back to running the pitot lines through the conduit, and I did this in the most practical manner possible – by cramming examples of the wires I’d need into the tube, along with the pitot lines. Here I’ve got two 12AWG wires (power/ground for the pitot), one 22AWG (pitot heat status), two 18AWG (landing/taxi light power), and the big shielded wire for the nav/strobe light units. It all fits quite nicely, so I declare this idea to be feasible. This at least settles one packaging concern. 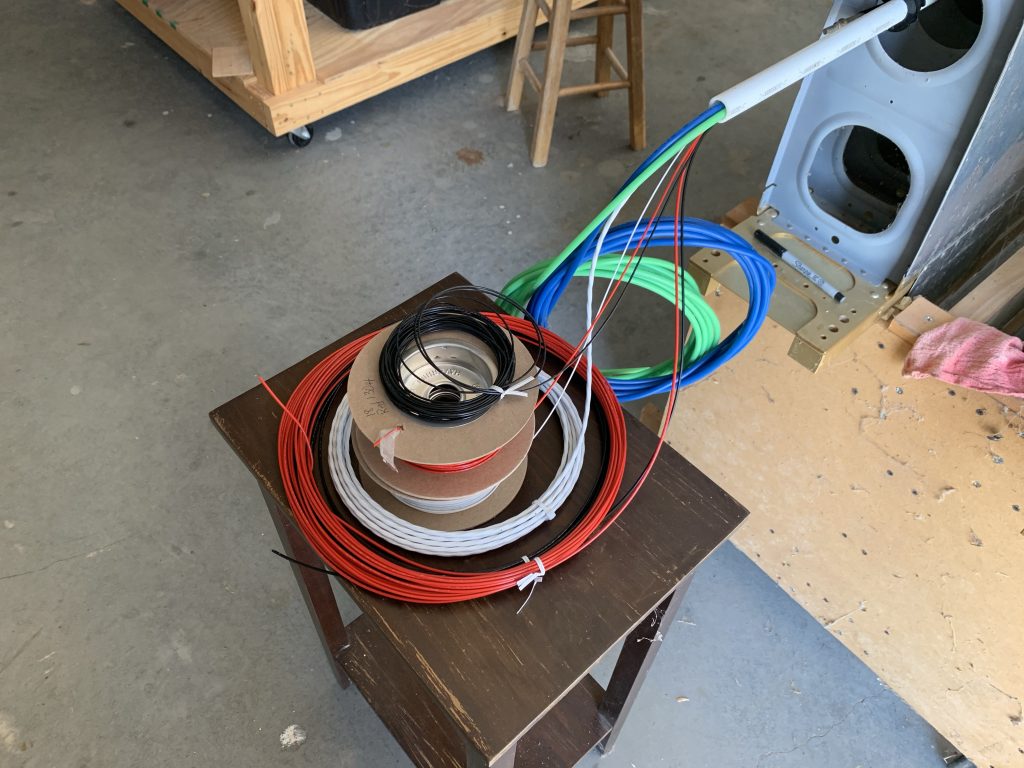 Next, I moved on to looking at the pitot controller. I still can’t finalize the wiring run to the pitot location until I get some supplies, but I figured I could at least work on the connectors a bit. One problem here that had to be solved was with the two 26AWG white wires that go from the controller to the tube. These twisted pairs end in Molex micro-fit connectors, and a couple weeks ago, while trying to clumsily de-pin one of them, I pulled the wire out of the contact. I ordered a proper removal tool from SteinAir, only to find that apparently I need two of them to de-pin, since each pin has two tabs, and the tool only has one prong.

I’d already ordered the necessary parts a while back, including extras, so I just decided that I didn’t need to de-pin after all. I just cut off the old connector, crimped on two new pins, and installed them in a new connector. Done. Also good practice for when I build the intermediate harness later on.

Also, while I was in a crimp experimentation mood, I decided to give my D-sub crimper a try. I cut off a small length of 22AWG and grabbed pins, sockets, and a connector for good measure, all from my last SteinAir order. Crimping the pin was super easy, as was inserting it into the connector with the insertion tool I got from Amazon. Extracting it was a different story – turns out buying this tool from Amazon was a poor choice. The extraction end is malformed and unusable. So now I have a test pin inserted into a connector and I can’t remove it. Fun.

This pretty well transitions into what I spent the rest of the day doing, and that was compiling yet another round of orders. I knew I wanted a actual non-crappy D-sub pin tool from Stein. I also wanted to order the conduit from Amazon that I was looking at last night. Oh, and I wanted some cushion clamps to use for routing the wires at the wingtip, once I had all the materials to actually mount the pitot controller.

And of course, since I was ordering stuff, I wanted to maximize the utility, so there was lots of looking forward to other wiring stuff and adding items. In the process, I sort of firmed up my plans for components under the seat pans – mainly terminal strips for interconnects to wing wiring stuff, but also rough location ideas for the Flyleds controller boards for the nav lights and the landing light wig-wag function.

Now I just need to go actually complete these orders. The real question is, how many days will it be before I realize I need even more things? Also, how much of the cost of building this plane will have gone directly to UPS and FedEx? I don’t want to know…