I’ll tell you, the more time goes by, the more I really come to understand the whole “90% done, 90% to go” maxim among builders. In my mind, I have a whole roadmap of things to be done, mostly revolving around getting the wiring done. Yet every time I go to try and move forward on that, it seems like there are myriad little hangups preventing forward progress.

As of today, I’ve received all the wiring stuff I ordered. A whole lotta wire in various gauges and colors, an absolute boatload of D-sub components from SteinAir, plus the relay and diode I’ll need for tying the busses together. The general goal of this was to be ready to permanently install the conduit runs in the wings and get all the wiring pulled, and specifically the first thing I wanted to address was getting the pitot heat controller installed with its extended wiring harness.

And yet…after thinking about how to run the wiring from the controller to the pitot location, I’ve decided the smart thing to do would be to put in a short run of split loom conduit from the wingtip to the pitot bay. If I were to ever need to replace that wiring, this would vastly simplify the process. It also provides better wiring protection, and finally, enables me to satisfy a concern I had about the wiring service loop.

I’ll need enough slack in the wiring to allow the pitot to be removed from the mount until I get to the preinstalled disconnects. But with no good access to the pitot bay, the best I can hope for is just cramming the wire in there and having it floating around unsecured. It’d probably be OK, but the thought bothers me. With the conduit, though, I can keep the service loop normally at the wing tip, where I can secure it carefully. If I need to remove the pitot, I can just feed the extra wire into the conduit, providing the slack needed at the mount.

The downside is that, well, I need some conduit before I can move forward on that. The good news is that I can get that from Amazon and have it here early next week with free shipping. But it’s still a wait…

That brings us to the next hangup of the day. This started with me thinking about the holes I’ll need to cut in the fuselage sides to allow the main wiring conduit to protrude inside, but that moved into a different question related to the pitot tube. I’ve been planning on running the nylon pitot/AOA lines though snap bushings in the ribs alongside the main spar. But then I have to figure out how to get them into the fuselage. I can’t just make penetrations right in line with the line locations, because on the fuselage that’s where the spar center section structure lives. There’s an existing hole nearby, but that’s where the aileron push tubes pass through…routing lines through there seems unwise. So if I stick with location, I’ll have to route the lines in the tight space between the wing root and fuselage aft to some sort of passthrough.

The more I think about this, the more I end up back at my original plan, which was to route the lines through the wiring conduit. Then it can enter the fuselage at the same place as the wiring, thus simplifying everything quite a bit. Additionally, the lines can exit the conduit at the wingtip, and go through the same flex conduit as the controller wiring, and have the same service-loop securing setup as the wires. That has a nice tidiness to it.

The question just remains: how well will everything fit? Well, at least I now have the materials needed to make that evaluation. Something for tomorrow’s to-do list, I guess.

So that brings us to the one bit of tangible work for the day, though there’s an amusing twist at the end. This returns us to the question of making the fuselage penetration for the main conduit. A while back I came up with the idea of making a template that I could use to locate those holes, and tonight I decided to put that into practice.

Basically, the idea was to locate the conduit relative to the bottom of the aft side of the spar. This wasn’t too hard, just required some careful work with a try square, ruler, and other fun stuff. I then transferred my measurements to a piece of scrap 1×4, and drilled a #30 pilot hole. I figured I’d eventually use this to drill a pilot hole in the fuselage, which I’d then enlarge with a unibit.

With the pilot hole drilled, I did a visual test against the conduit bracket on the inboard rib, and it seemed to line up well, so I added the last piece: another scrap 1×4 piece screwed 90° to the other one. The idea is that this piece is slid into the center section and held against its aft side, providing the reference needed to locate the hole.

Here’s the finished piece, sitting by itself and then held in place on the fuselage: 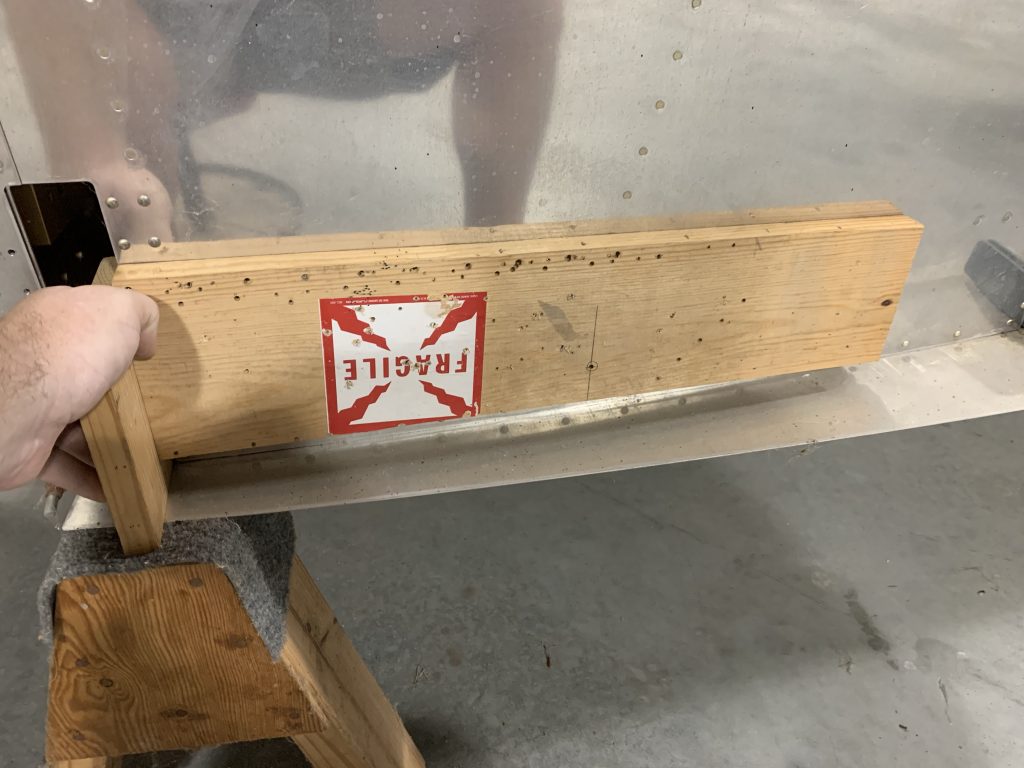 Now, for the amusing twist: I’m not sure I’m going to use this after all. After attaching the 90° piece, I did another sort of test-fit against the end of the wing spar, and then it seemed the hole wasn’t lined up well at all. Granted, this is probably because I had to hold the piece much further from the conduit bracket, but that just made me think that there’s a lot of slop in this setup, and so my overall trust in it is pretty low.

I’m thinking that just figuring out a measuring scheme I can transfer to the fuselage is smarter. Maybe first measure the distance from the bottom of a wing rib to the bracket center, ensuring I’m square against the rib when I do it. Then I can make on the rib where the line intersecting the bracket hits the rib, and measure the straight-line distance from that to the intersection of the rib and the spar. That should be easily transferable to the fuselage, and seems more reliable than my template idea, which kind of feels like the old telephone game where intermediate reps end up garbling the original message.

I’m also thinking now about just seeing if Josie can help me…well…very temporarily install a wing on the fuselage. This would have a couple benefits: I could then run the conduit through the wing in question and directly trace its outline on the fuselage, and have a lot more confidence in the hole location. I could also measure the clearance between the inboard rib and the fuselage at that location, which would help me trim the conduit to final length, and thus eliminate a source of trial-and-error when the time comes to more permanently fit the wing.

Will I do it? I dunno, we’ll see if I still feel positive about the idea after a good night’s sleep. Though first I guess I’ll be finishing up my Amazon order…