So today’s task was to work out the landing light mounting. Way back when, I bought the Duckworks leading edge landing-light kit, and at that time I’d intended to use some sorta-nonstandard Whelen lights, and so the kit I ordered came with blank mounting plates – rather than, say, having an existing cutout for a PAR36 bulb.

In the intervening years, Flyleds became a thing, and I went with their combo light, which we’ve seen before. One of the nice things about this combo light is that it fits in a PAR36-sized cutout (though the unit is a lot deeper than a PAR36 would be), so it’d work great with that Duckworks mount…if only I had it. And in fact. I did consider just ordering two new mount plates, but in the end it seemed stupid to not at least try to cut the mounts I had.

And really, the task is pretty simple. Vertical positioning of the light is a no-brainer – just put it on centerline. The horizontal position is more interesting, though – the mount spans the entire bay in the leading edge, but the cutout is small, so the light obviously needs to be aligned with the cutout. So I spent some time with a ruler, reaching inside the bay, to measure the distance from each rib to the corresponding side of the cutout, and the width of the cutout itself. Armed with this information, I marked off the rough size of the light on the plate – a 4” square (technically it’s round but the square works fine for this). Then I installed the mount in the wing and verified the lineup. Actually, I did this twice, because the first time I measured a bit wrong and put the mark an inch off. Which is, of course, why we start with just marker…

This photo (and a few subsequent ones like it) is a bit awkward – the wings are still in the cart, leading edge down, so I’m basically shooting up from the floor to get this angle. Yeah, I did a decent amount of squirming on the floor today: 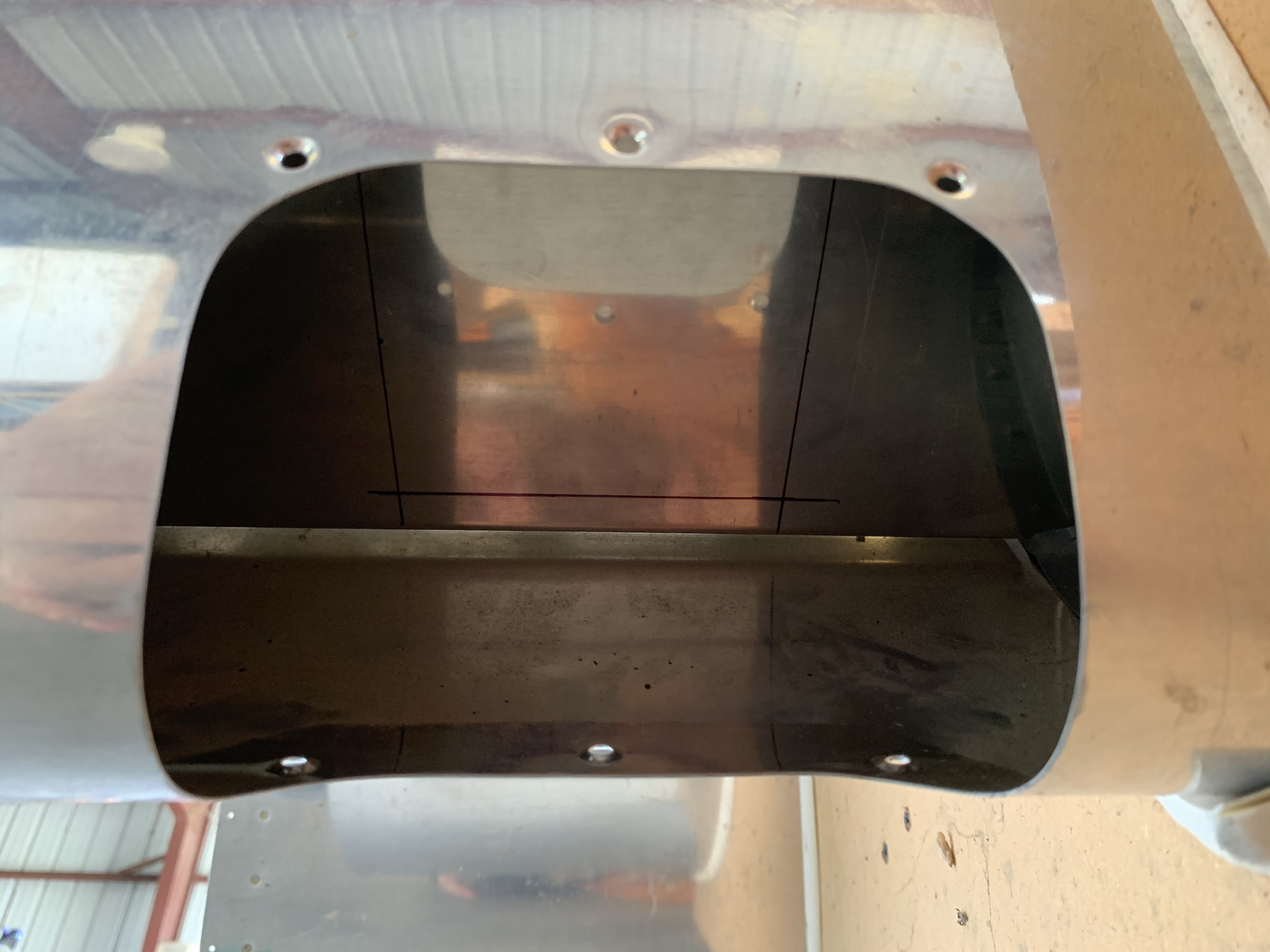 With the position verified, it was time to make the cutouts. I actually decided to make these about 4.25” instead of 4”, to provide a little more clearance for some of the components. This ended up being unnecessary, for reasons we’ll cover later, but oh well. My fancy hole-cutter tool, which hadn’t been used in some time, made short work of this: 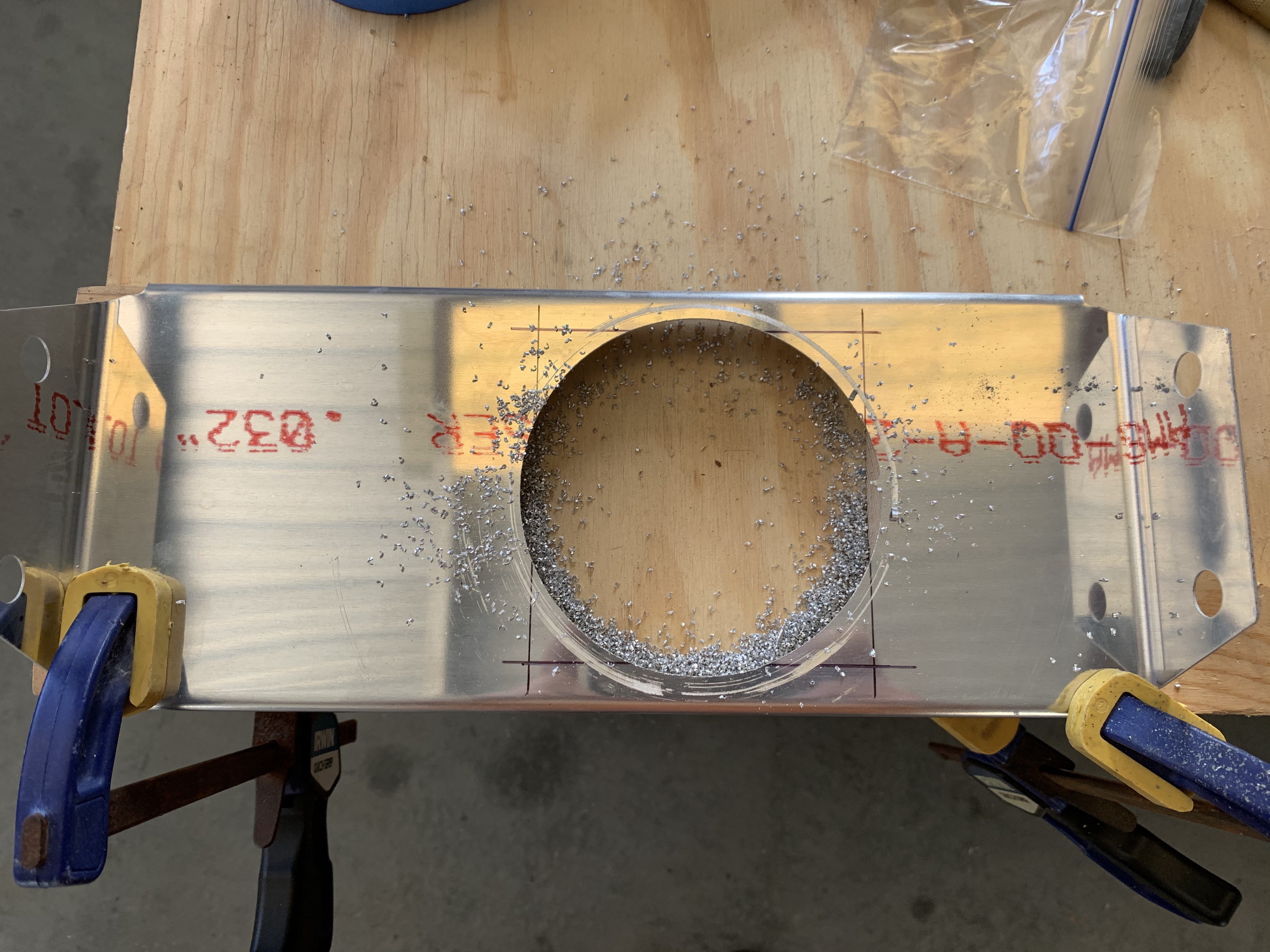 Next I did some more positioning lines, which allowed me to position a light unit in each mount, and use the prepunched mount holes in the lights as a drill template for the mounts. This gave me my mounting screw locations, and allowed me to cleco the lights into the mounts for the first time: 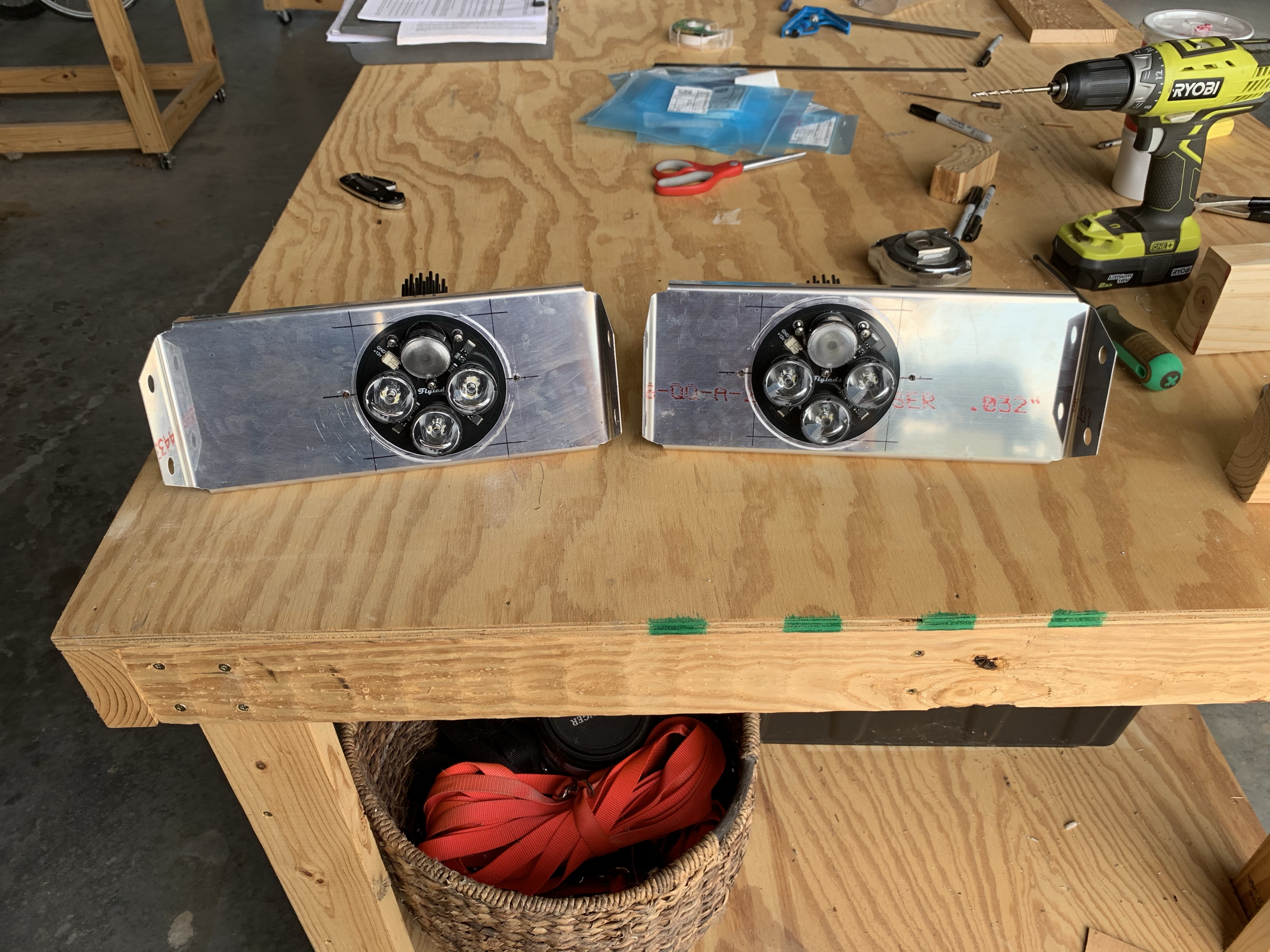 Now, that photo – in particular, the way the lights are located behind the mounts – belies a whole ton of head-scratching. At issue was the question of how exactly these lights would be installed (and potentially removed for maintenance at a later time). Put simply, there seems to be no way for the lights, as delivered, to be inserted into the bay of the leading edge. There are two possible avenues here – in through the leading edge cutout, or through the lightening hole in the outboard rib.

Still, there was the problem that the light wouldn’t fit through the rib hole either. The useful news here is that while the combo light circuit board is rectangular, the actual circuit traces are confined to a 4” circle. The rest of the board is fair game for trimming to fit a particular application, and that’s exactly what I did.

My original plan was to mark a circle just a bit larger than the mount cutouts, and use that to trim the boards, retaining two “ears” where the screw holes were located. This plan lasted about as long as it took for me to try and figure out how to trace the cut line with a marker. That was challenging enough, but making the cut would be not much fun either. So I decided to start small, and simply mark 45° cut lines starting at my potential mounting “ear” locations. I figured worst case, if those cuts weren’t good enough, it’d be material I’d be removing anyway for the circular cut idea.

Removing the corners still didn’t quite allow the light to pass through the rib, but by simply trimming a bit off the top and bottom of the boards, I was in business. It still takes some careful maneuvering to get the light through, but it’s doable. The resulting trimmed light unit has a sort of elongated octagonal shape: 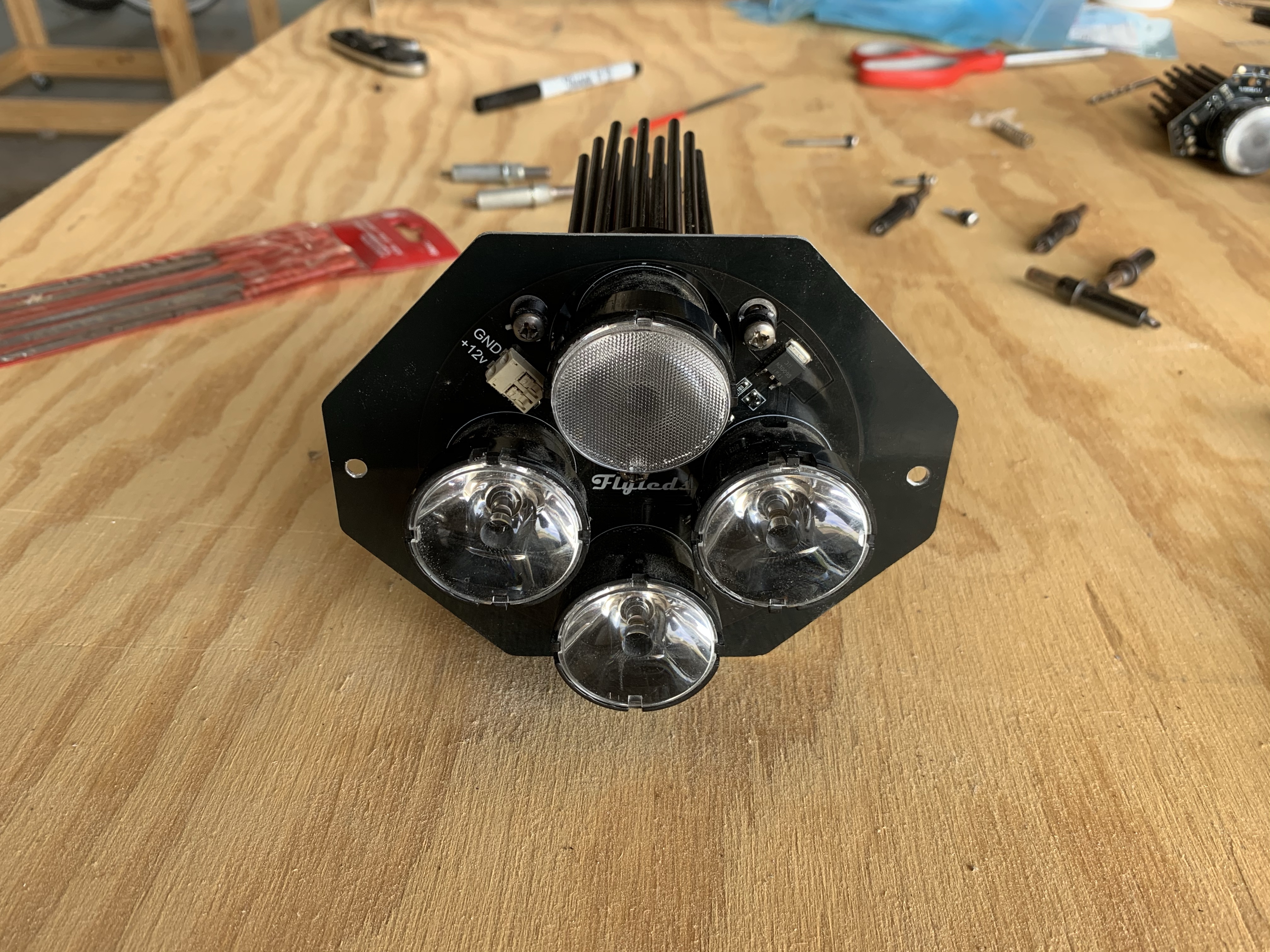 This just left the question of attaching the lights to the mounts. Normally, if you were installing the lights from the front, you’d install nutplates on the back of the mounts, to receive the mounting screws. That wouldn’t work in this case, so there were two options: either install the nutplates on the front of the mounts, so the mount screws were installed from inside the wing, or install the nutplates on the light itself, so the screws would go in from the front. The latter seemed like a better option: first, I wouldn’t have unsightly nutplates visible in my landing light cutout, and second, trying to line up the screwed working through the lightening hole sounded like no fun.

So I drilled the lights for the nutplates and got them installed, and then, it was finally time for a full-up test fit. First, the mount went in, then the light, and the result looks pretty good: 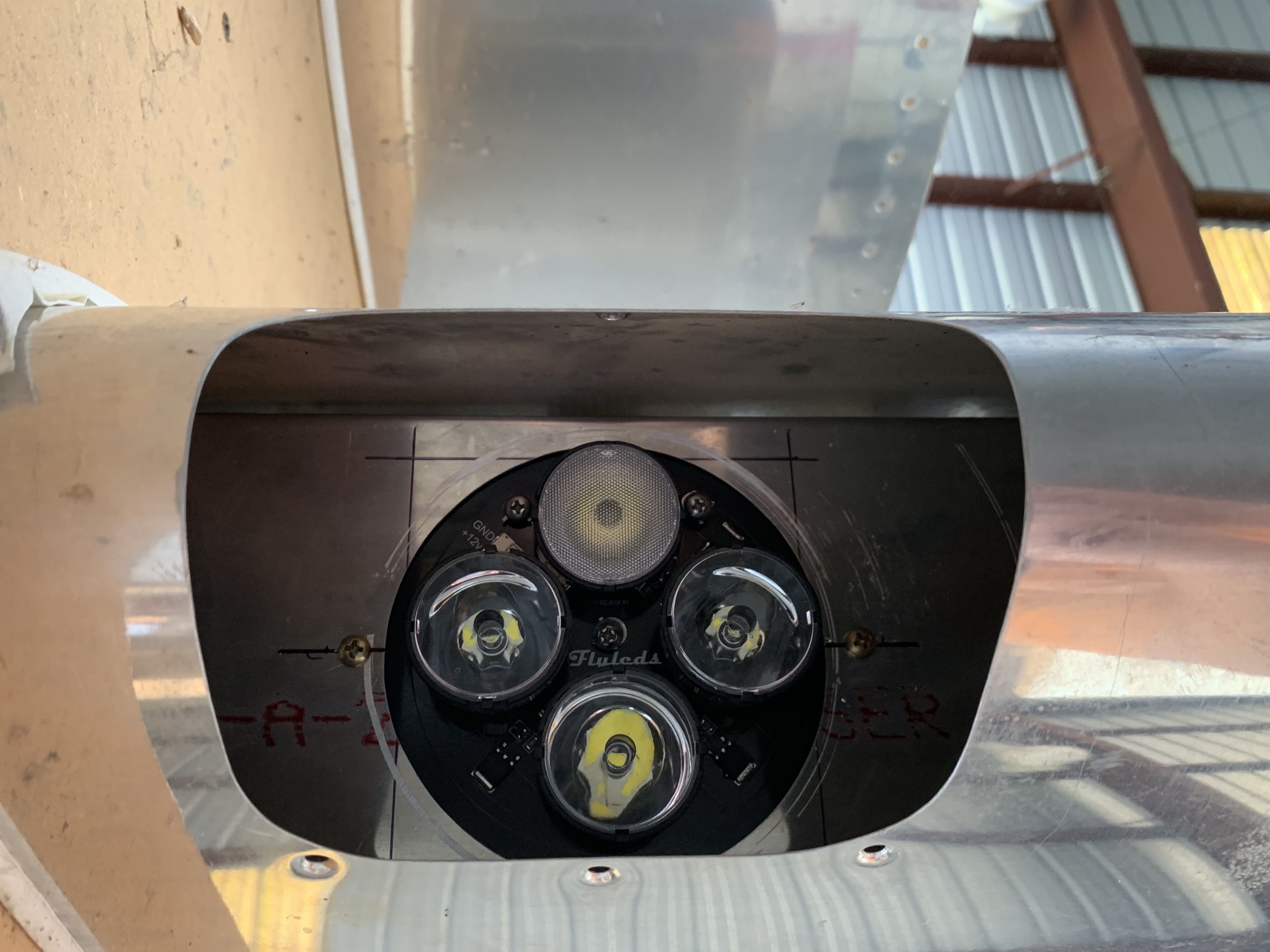 From the back side of the bay, we can see that the heat sinks have plenty of room: 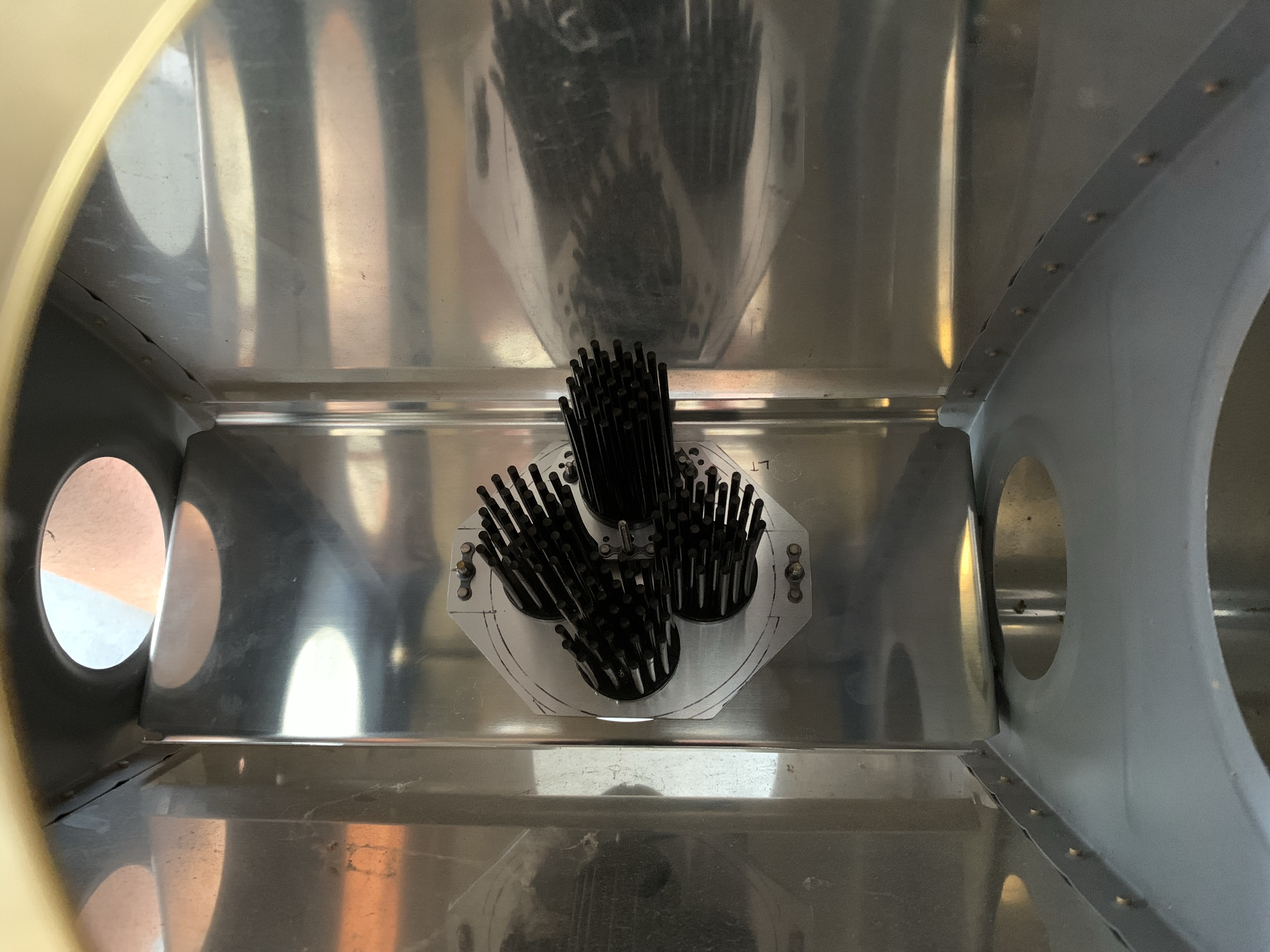 So that’s pretty much the end of this bit. The one remaining question is how I’ll handle the wiring for these; this is particular interesting since the wires for the three landing light projects attach on the front of the unit, while the wires for the taxi light attach on the rear. I intend to run all four wires to a single Molex connecter in the wingtip, and I’d like for the wiring pigtail to be removable along with the light unit; so I may have to get creative with that. Worst case, i guess I could just use two two-position connectors instead of a single four-place. In any case, I can’t really do anything with this until the wire comes in.

So now I guess I gotta figure out something else to do that doesn’t involve wire. Maybe I should dig up the aileron trim servo and see about getting that system done; I worked on that years ago, got frustrated, and moved on. Perhaps I’m better skilled now than I was then…