Well, this is sort of a conglomeration of work from the past few days, though until tonight it was mostly short sessions of standing around and sort of squinting. Tonight, though, I made an actual effort to make something of those squint sessions. As I may have mentioned before, I’m currently considering a sort of two-shelf system behind the panel. The upper shelf would only be accessible by removing the center panel section or EFIS screens, but the lower one will house fuse blocks, and so I want these to be relatively easily accessible on the ground. So I intend to make that shelf hinged somehow, to provide that easy access.

Part of the question was how to do the hinging. My original idea was to have the shelf be separated into two sections, each of which would be hinged at its outboard end, and thus sort of swing down from the middle. I think this idea would maximize use of space, but add significant complexity in wiring. Sp instead I’m so far going with a one-piece shelf that hinges from the forward end. The main detraction here is that when lowered, the shelf can interfere with the gear towers. So when I did some measuring and cut out a cardboard mockup tonight, I had to sort of chamfer the corners a bit to provide clearance with the towers.

But with that actual mockup, I could lay out the components and start to really consider their layout. Basically, what I expect to have living here is the main power distribution hardware and the SDS CPI2 electronic ignition CPU. The CPI2 unit is kind of optional; I’m mainly including it here because it does include a couple built-in fuses, though if those ever blow it’d mean some very abnormal fault had happened upstream. I might end up rethinking this location, since as we’ll see, things are kind of snug.

The power distribution hardware consists of three fuse blocks, one for each bus: main, essential, and battery, plus some extra hardware allowing for emergency measures. Since the electronic ignition means I’ll have an electrically-dependent airplane, I’m paying special attention to redundancy here. The setup here is based on Bob Nuckolls’s design, where an essential bus includes two potential feed paths: a normal one from the main bus, and an alternate one from an always-hot battery bus. Making this work requires a relay to switch that alternate path, and a large diode to prevent the alternate path from back feeding the main bus. (the idea is that the essential bug is used when loads need to be seriously conserved) That relay and diode are the other two items depicted in this first sample layout: 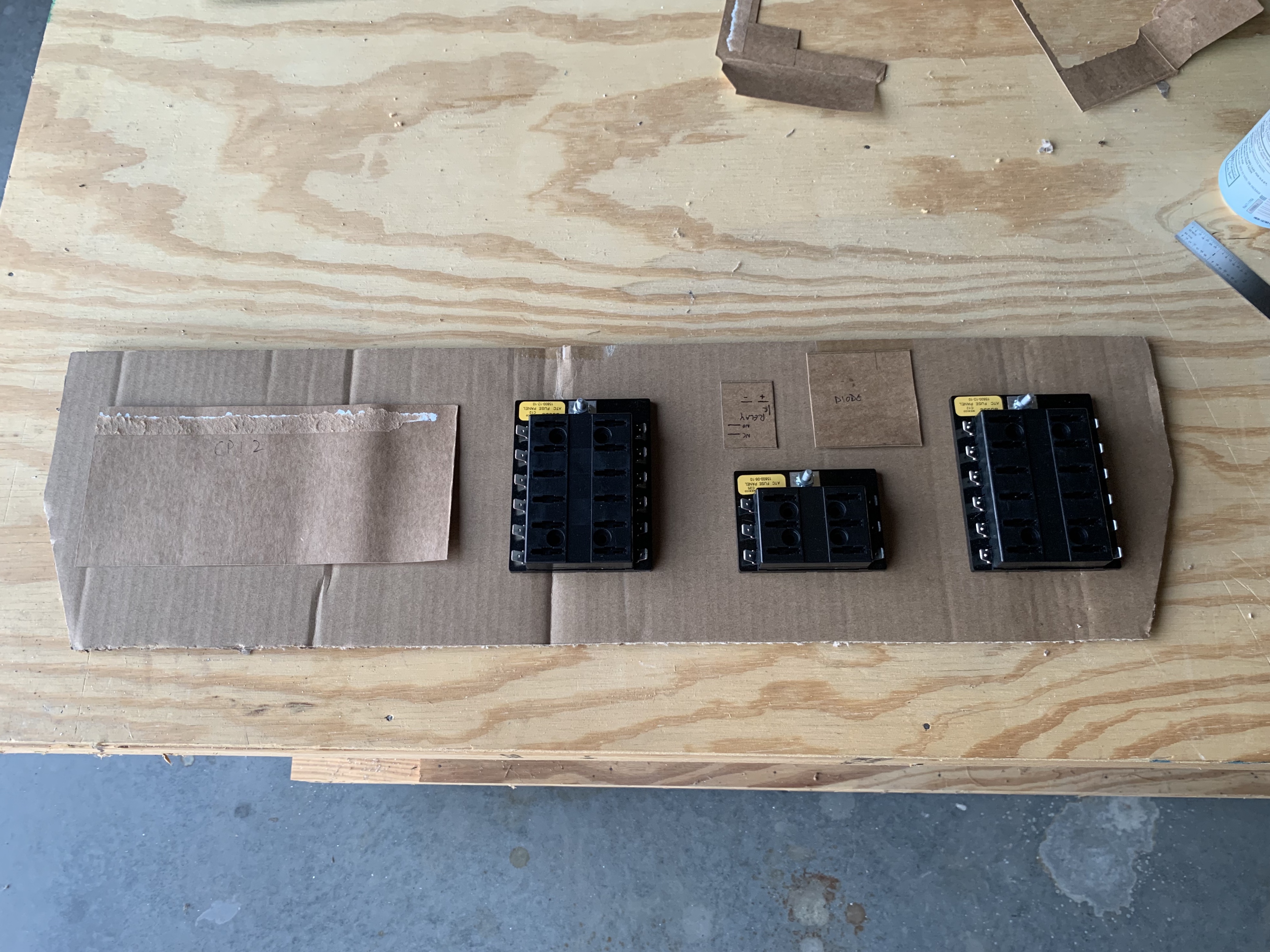 The thing with this setup is that the layout and routing of the wires is actually kind of important. This actually drive the arrangement of the fuse blocks; my initial idea was to putt he smaller battery block on the far right, but routing the wires to the essential bus works better if that block is located far right.

Still, I wanted to better visualize the wiring runs, and instead of drawing on the cardboard – not necessarily great for iteration – I decided to transfer this layout to a whiteboard. (and, now that I look at it, I see that I inadvertently switched the locations of the diode and relay) The colors here represent the two power paths and, by extension, different wiring sizes. Red is the main power distribution from the alternators, and will be sized at 6ga to be able to handle the max possible output from an alternator. Blue is much smaller wire, used for supplying the battery bus from the battery itself, as well as supplying the essential bus. Wire size here will likely be 10ga, assuming I can refine my load planning a bit.

Not depicted here are the outputs from each block, which I’d expect to run along the bottom of the shelf before branching off to their various destinations. 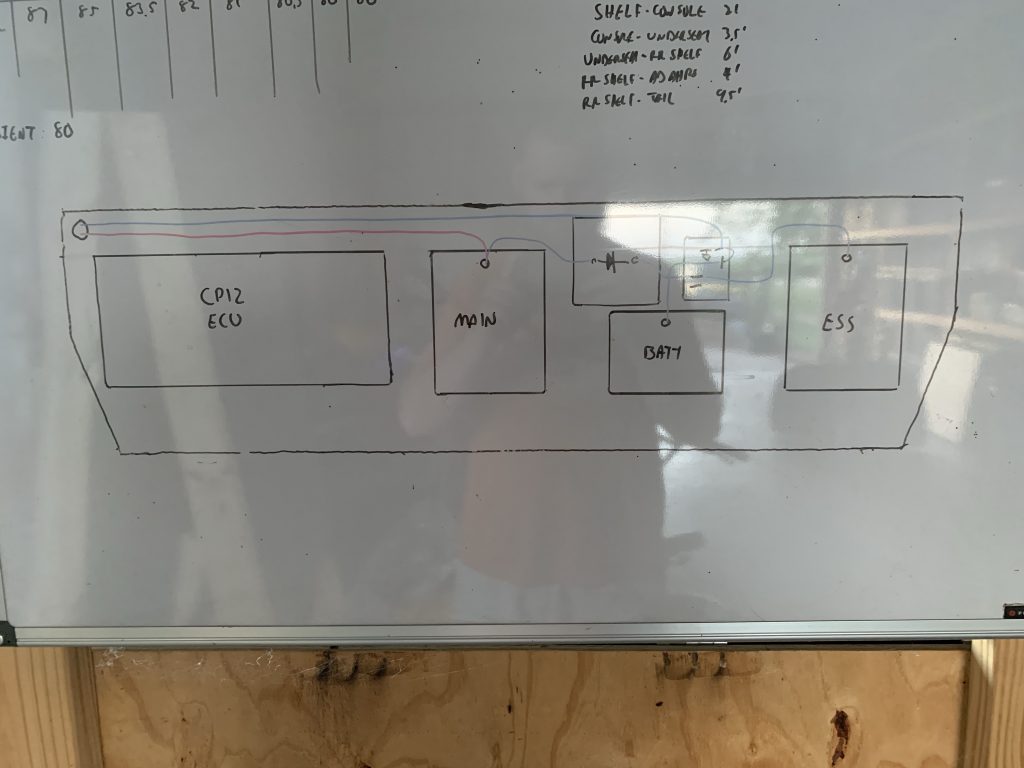 Anyway, I’m still not completely happy with this layout; in particular, I feel like things are potentially cramped for the wiring runs at the top & bottom of the shelf. I’d prefer to make the shelf narrower in this dimension too – making it this wide would require hinging it at the baggage bulkhead, a bit more complex than hinging it at the forward brace. But I don’t think I can spare that space and still make this layout work…so I’m wondering if the thing to do is to let the CPI ECU live somewhere else. Then I could rotate the two large fuse blocks and gain some room here. I suppose I should do some similar planning for the upper shelf to determine if that’s feasible.

Lots and lots to think about…