Yep, finished up this shelf today, for the most part working in half-hour shifts before retreating to the air conditioning. Houston summer has definitely arrived in full force.

After cutting another section off my wing skin to start with, I laid out the cuts. The nice thing about using a dedicated form block like I did in this case is that it can double as a template – just lay it on the sheet and trace around it, and since my flanges are intended to be 3/4”, the same as the block thickness, the flanges can be traced using the edges of the block. Much faster than doing a bunch of careful measuring. I also laid out my tooling holes in the block and pre-drilled them, so I could use the block to drill those in the pieces and ensure that both parts could be attached to the block. 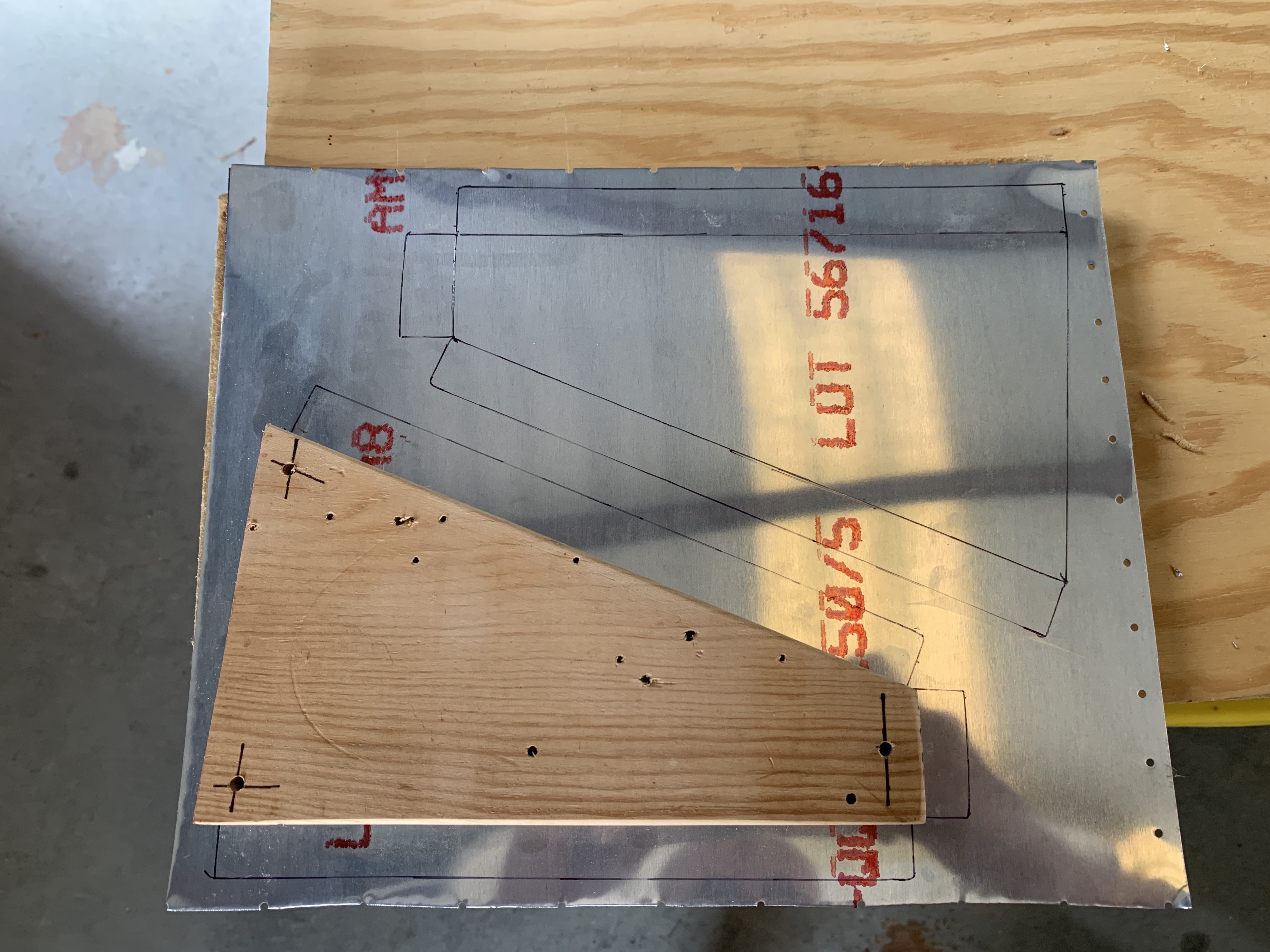 Some time and a bunch go cutting and filing later, I had the sheet pieces ready for forming: 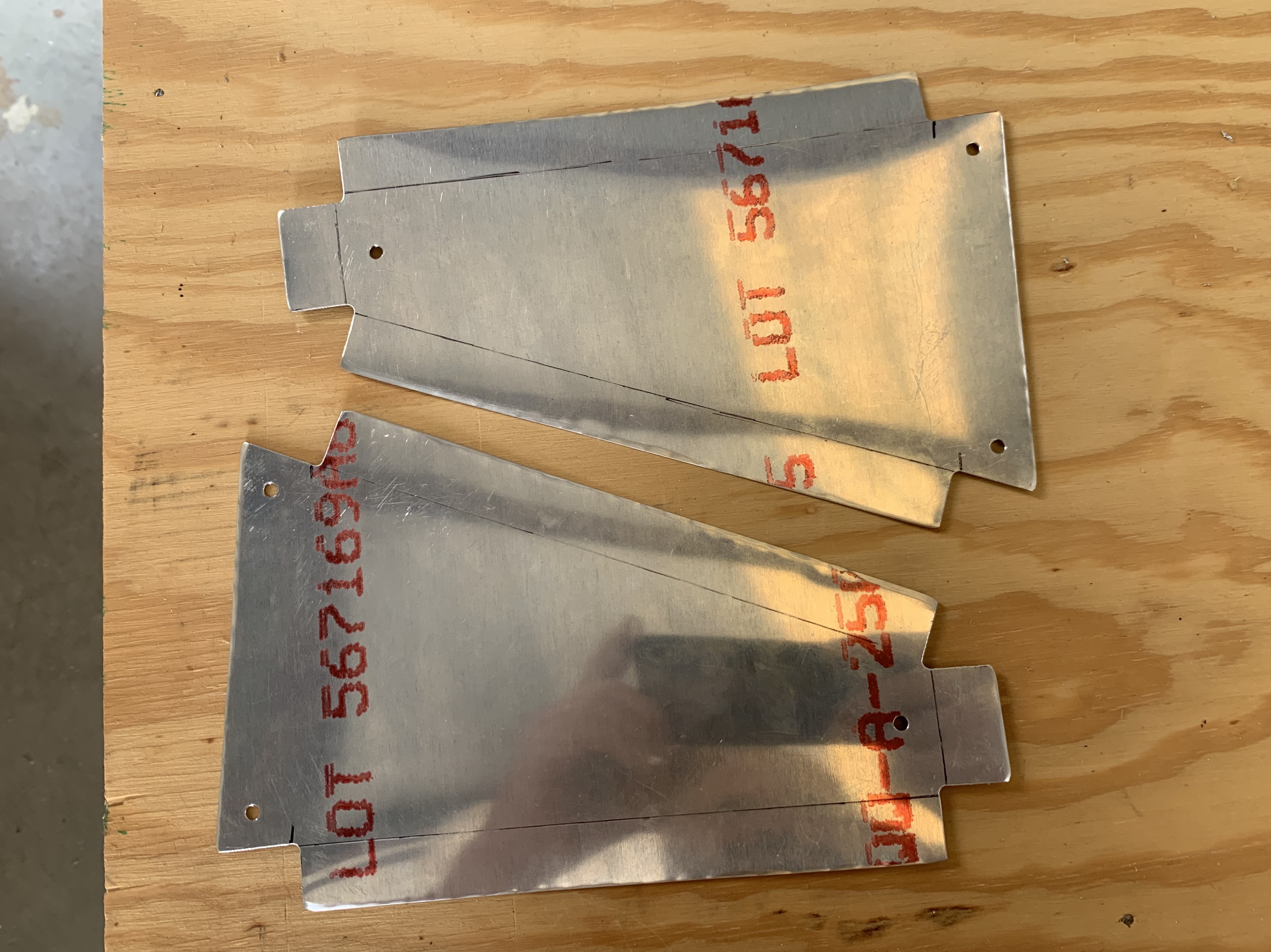 From there, it was just a matter of clecoing the sheet to the form block, clamping it in the vise, and applying some strategic physical violence with a hammer. The only hangup here is that thank to the material’s springback, I can’t quite get a 90° bend with this block. That would require relieving the edges of the block a bit, and then wouldn’t be symmetrical and thus wouldn’t work for these pieces. 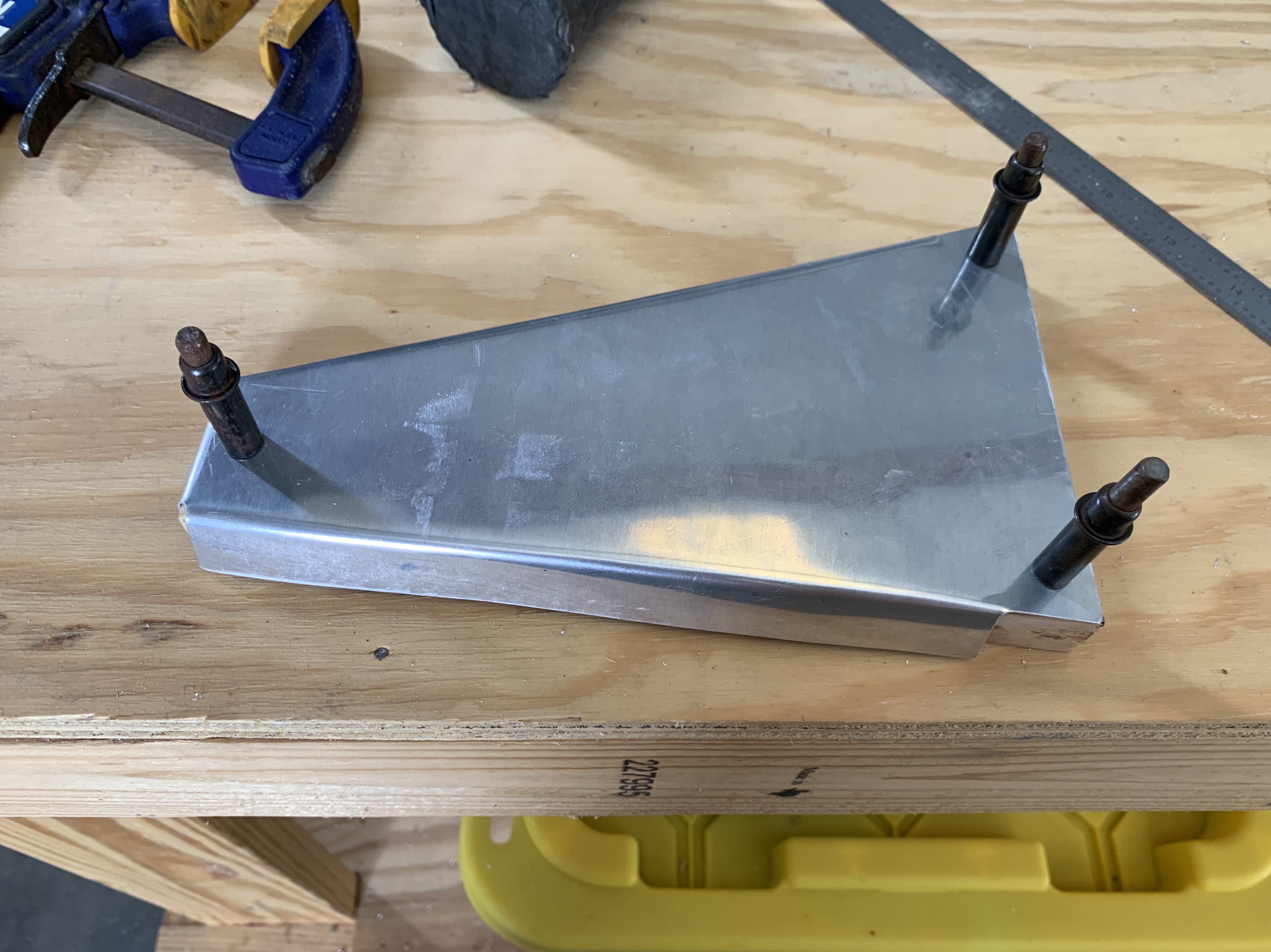 After squaring up the flanges, it was finally time to cleco the assembly together and see how it fit. Seems decent: 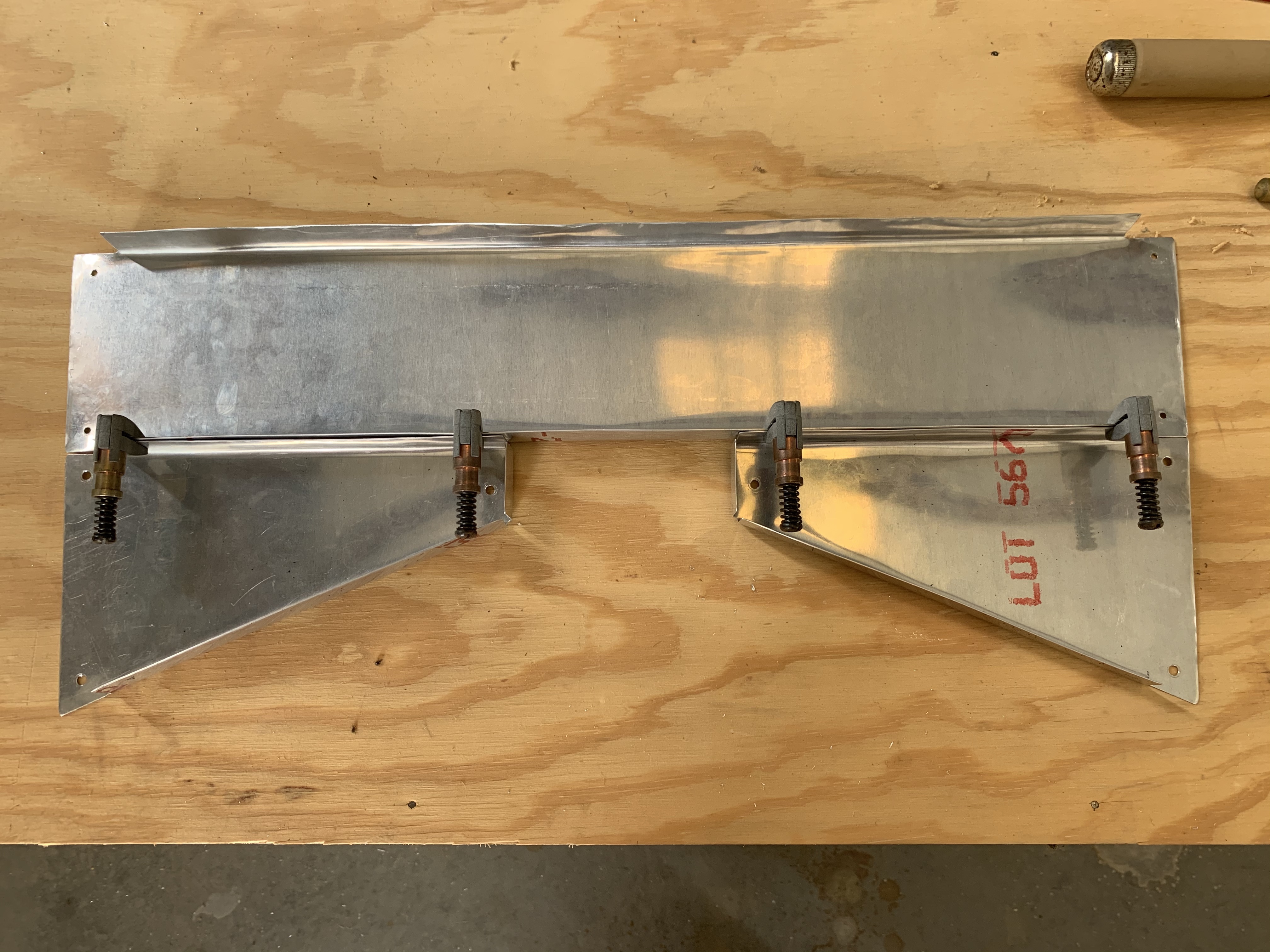 After that there was just laying out the drilling the rivet holes, and eventually squeezing rivets to assemble everything. After a test fit in the fuselage, I needed to work on the outside edges a bit to match up to the fuselage taper, but eventually it fit like a glove: 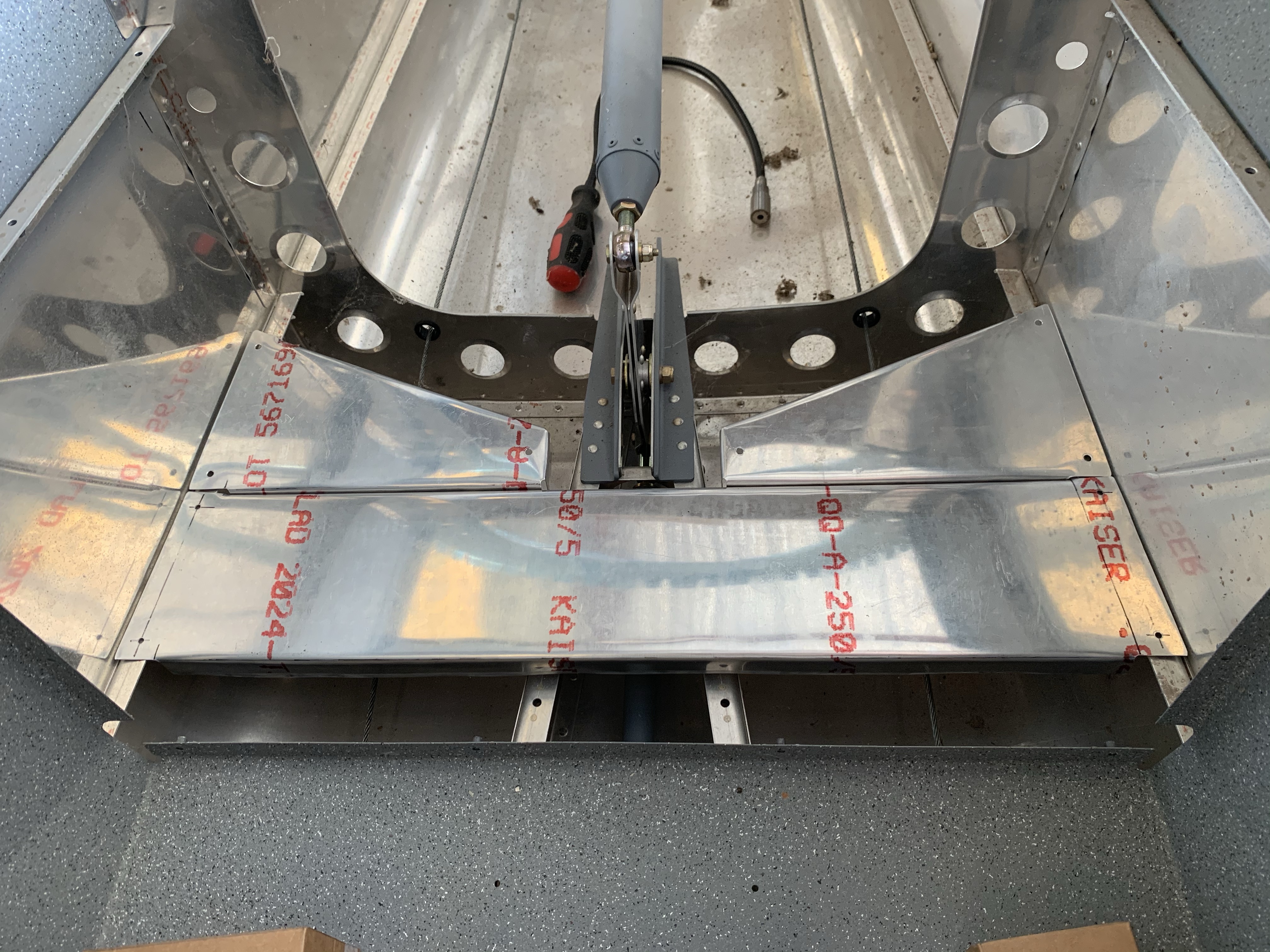 And here it is with the cardboard unit mockups sitting roughly in their planned homes: 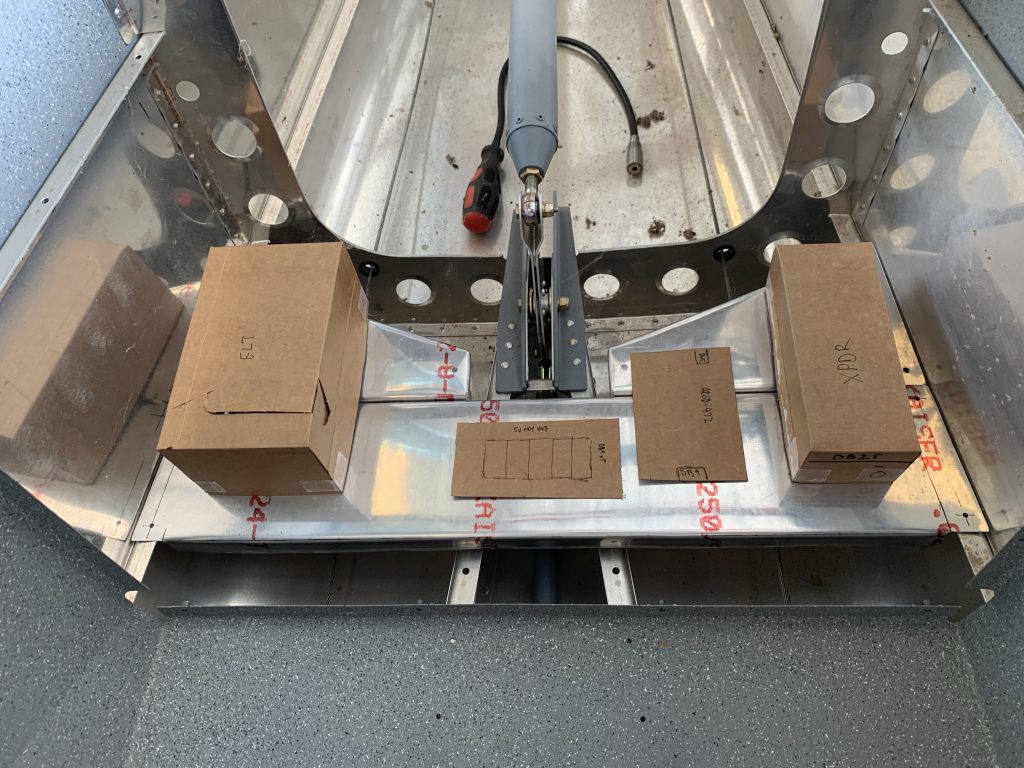 I still haven’t determined if the remote com radio will be located here or behind the panel up front. I realized yesterday that when I was mocking up stuff for the forward avionics shelf, I completed forgot about the ECU unit for the SDS CPI2 ignition. Granted, I haven’t gotten anywhere close to having a real layout for that shelf, so it’s not a huge problem, but it is another thing that could make me decide to move the radio aft.

I’m not convinced that’s going to be necessary, though. I have the beginnings of an idea for basically a two-level setup behind the panel, but it’ll require some tinkering to see if it’ll work. The general idea is to have two low-mounted shelves on the right and left, which will be hinged at their outboard ends and can be swung down beneath the panel for access. The fuse blocks could go on the left side, and the CPI2 controller unit on the right. (I want this to be somewhat-easily accessible, since it has some fuses in it that might need service in a pinch)

Above this would be another flat shelf, high enough to clear the units on the hinged shelves below, and that could house all the other units, stuff that can be less easily accessible. Getting to those would require pulling the EFIS units and/or the entire center panel.

My fuse blocks should come in from Stein Air tomorrow, which will help me start to determine whether this idea is feasible or not. Coming up: lots more photos of cardboard and cheap plywood mockups, I suppose…