Trying to make an avionics shelf

So when I got started nice and early this morning, I decided to go ahead and start fabricating my aft avionics shelf, and I figured I’d start with the most complex part of the thing – the carefully-bent piece of angle to support the sort of wraparound shape of the back of the shelf.

So I cut off a chunk of angle long enough to do the deed, plus some extra because I’m not a complete idiot. Then I used the plywood mockup I had to mark where my bends would be, and cut out notches to allow for those. Those were rough cut on the band saw and then refined with files, and then the bends could be made. It ended up nicely fitting with the template: 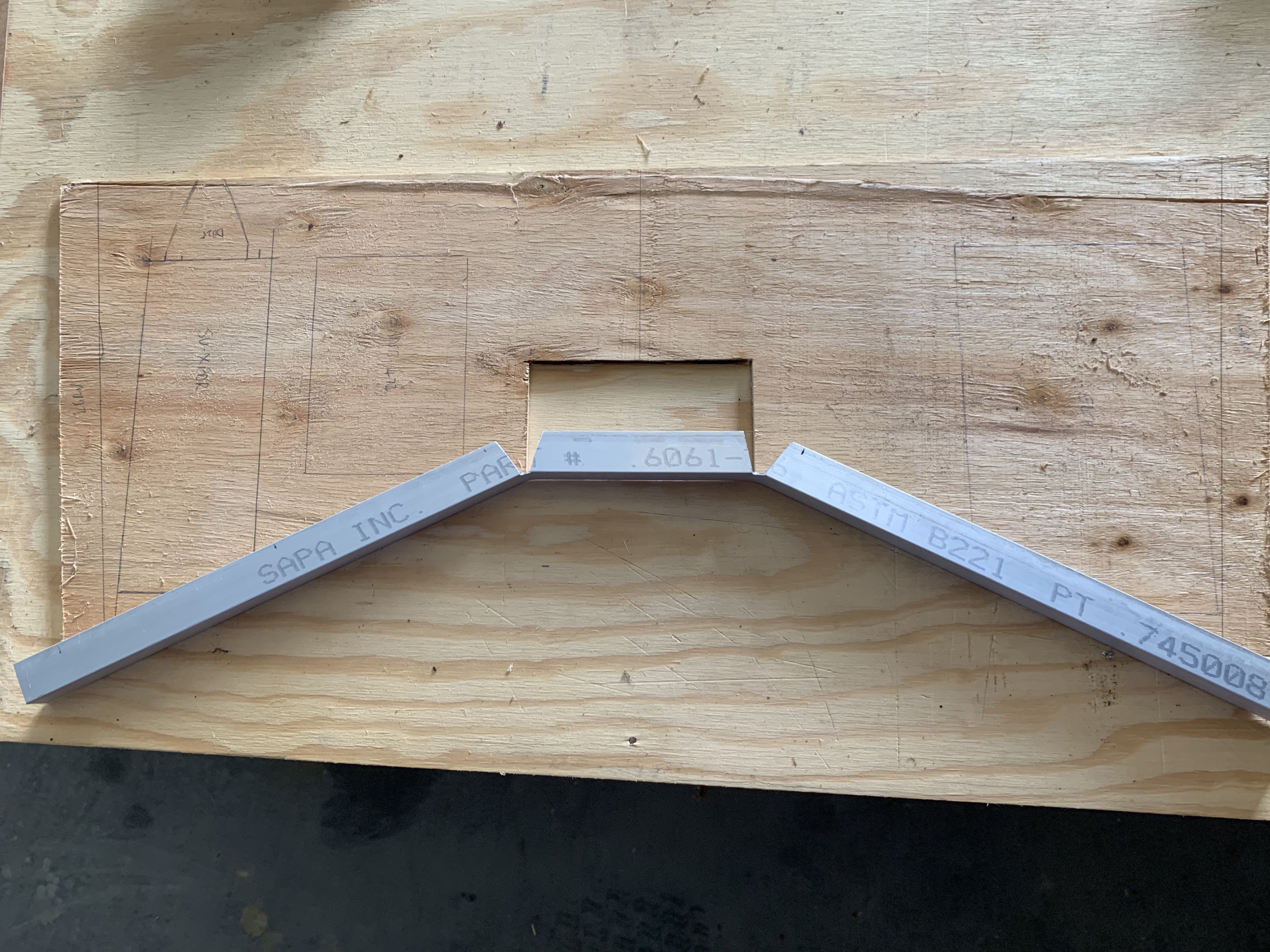 Next, I used the template to trim the ends to length, and all I had left to do was to remove one leg of the angle to leave mounting tabs that could bolt to the longerons. And that’s where this went sideways – I set up the trim wrong, and ended up mangling the ends. Welp…learning experiences abound. So I cut off another chunk of angle and started over again. This time I got the mounting tabs done right, and the piece ended up fitting nicely in the fuselage: 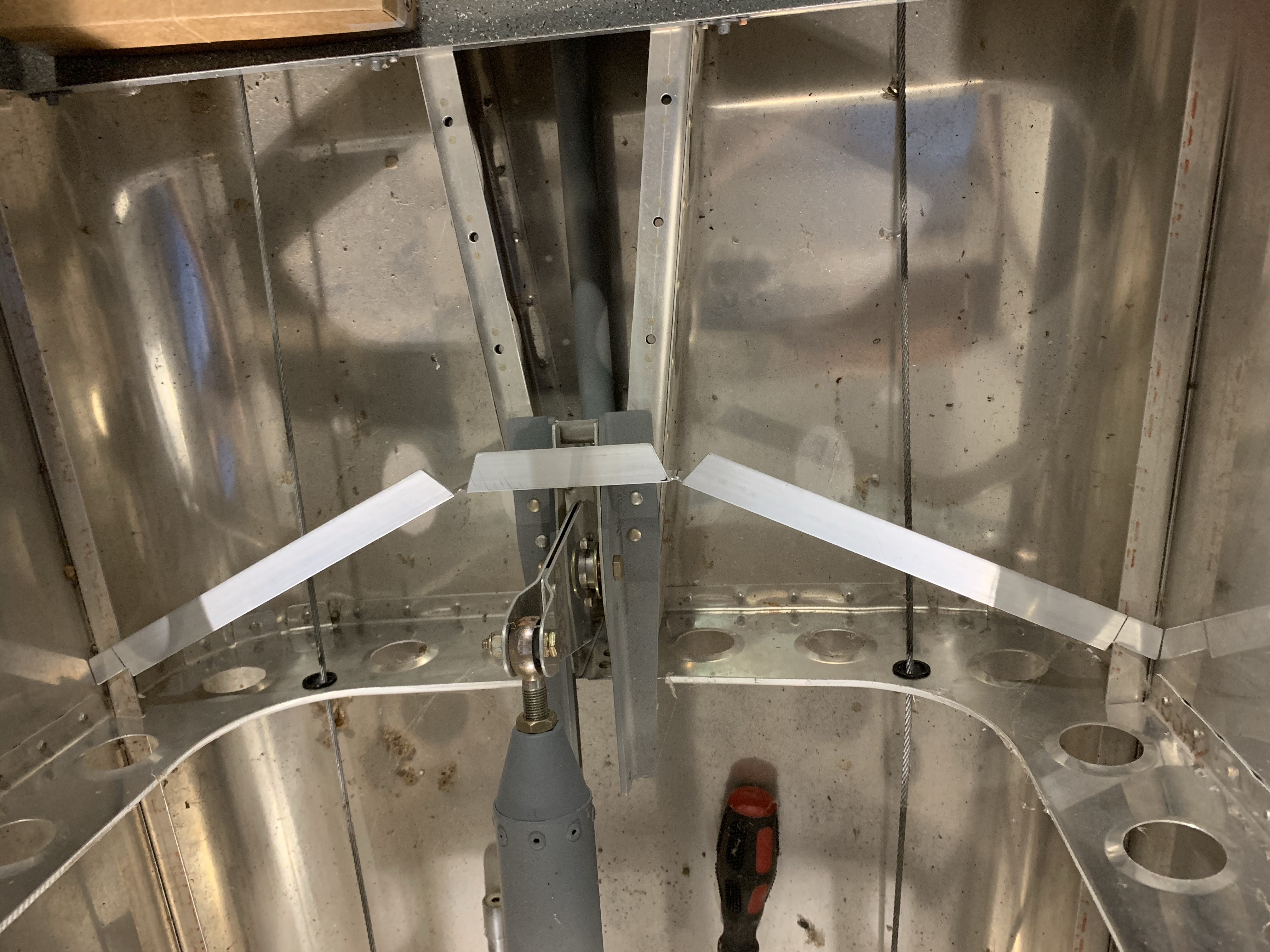 Well, except for one thing. I neglected to account for how, where this piece crosses the fuselage centerline, there’s the beginnings of the elevator bellcrank mount, which sticks up enough that the center of the angle contacts it: 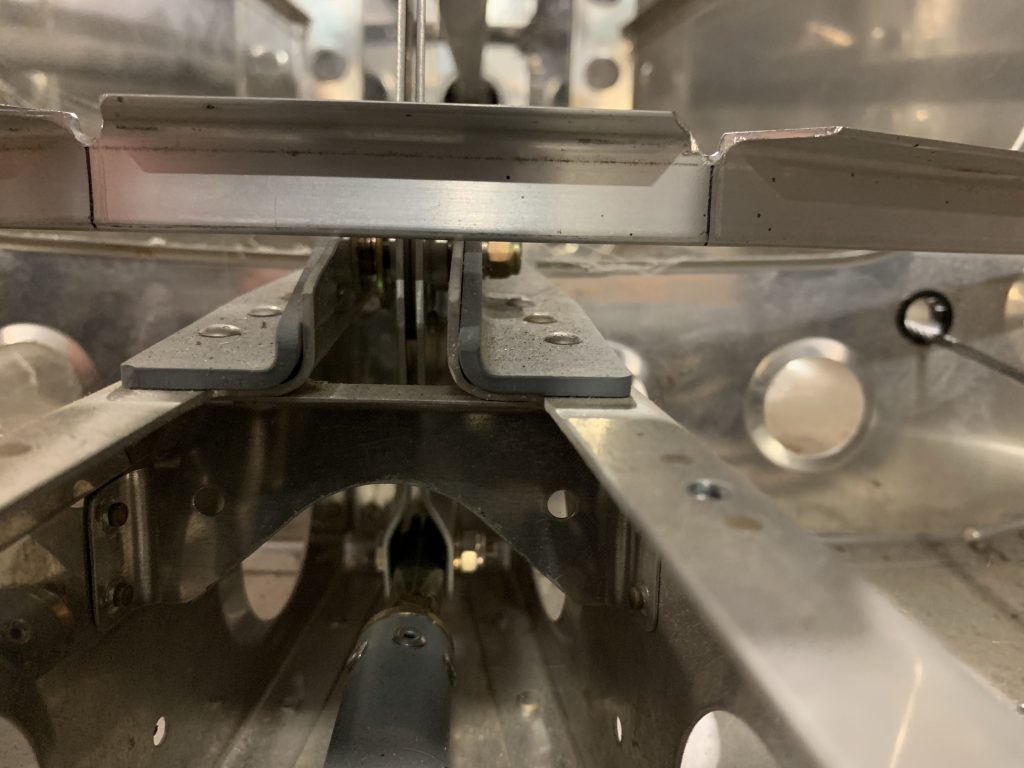 I made an attempt to cut a small relief in the angle there for clearance, removing about 3/16” of the 1/4” angle, but it still contact lightly, though it at least sits level now. Still, I’d probably need to make that relief cut twice as deep to ensure no contact, especially under loads in the air. At that point, I’d have removed a lot of the rigidity provided by the angle here, and right at midspan, where I most need that rigidity.

So long story short, I think I’ve got to go back to the drawing board here. What I may end up doing is figuring a way to tie into the nutplates on the baggage ribs, which are there to support a rear battery box, if installed – but mine is going up front. That would at least provide some nice support to the center of the shelf, but making everything line up properly will likely be a challenge.

So yeah, time for some more thinking.

UPDATE: After mulling over this some more, one conclusion I’ve come to is that I am seriously overbuilding this avionics shelf. Basically, my planned structure would consist of aluminum angles to bridge across the fuselage, with sheet rivet to those angles to form the shelf. However, the upper baggage shelf – which will sit right above this location – has no sort of steparate stiffeners whatsoever. It’s just .025” sheet, with a little rigidity provided by way of bent flanges forward and aft.

Van’s doesn’t list a specific max weight for this shelf, but for the sake of comparison, everything I’ll be putting on my avionics shelf is just over three pounds. If I were to end up putting the com radio back here, it’d go up to about 3.75#. I’m sure that baggage shelf can support well over that!

So with this in mind, I’m going to start with rethinking my shelf and just using sheet aluminum with bent edge flanges for lateral support, instead of the complexity of bending angle in fancy ways. I’ve already got an idea how to use this approach to build my strangely-shaped shelf, too. Maybe I’ll give that a try tomorrow.