Pretty much the same story as last time. Tonight I made up cardboard mockups of the remaining units I need to plan for, and which I at least sort of intend to put behind the panel. Then I got to looking at the area behind the panel with an eye towards making up an avionics shelf. What makes this interesting i that there are two braces that go across the cabin, tying together the tops of the gear towers. These seem like great starting places for a shelf, except one is higher than the other for some reason.

Still, it seems like people are using these for their shelves; one photo I found simply makes the shelf sort of L-shaped, placed at the level of the lower brace and then having a vertical element to tie into the higher one. I’m tentatively leaning towards just having a sloped shelf going between the braces. I kind of like this better than the L-shape thing, and I think it’ll actually make the stuff back here a little easier to work with for maintenance; I can either remove the EFIS units or the entire panel center section, and then have the shelf stuff presented nicely to me as I sit in the seat.

Anyway, for the time being I cut out a piece of cardboard roughly the size of the shelf and tried laying stuff out on it. Everything seems workable off the bat, though I haven’t carefully accounted for the space needed for connectors. I’ll likely end up with some things mounted against the baggage bulkhead as well, most notably the two voltage regulators (not shown in the following photo). 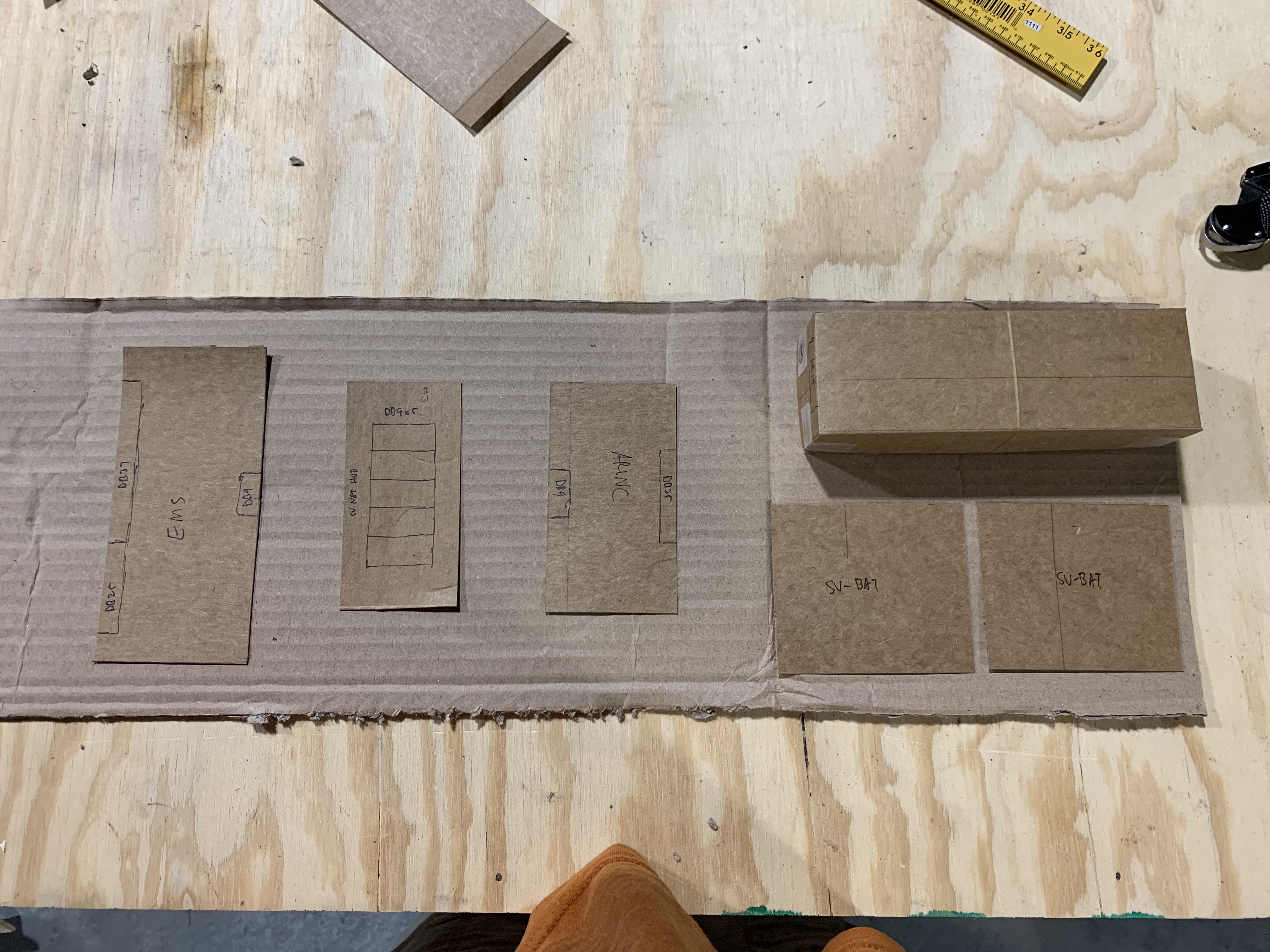 So none of this is final by any means, particularly since I need to account for those connectors. I guess maybe I should make up cardboard versions of those as well; it feels a little weird but this is definitely something I need to take into account. Mostly now I just get to move stuff around over and over again.

In other news, I’m continuing to accumulate parts. Got some tailwheel stuff coming in tomorrow, just ordered my fuse blocks, and it would appear that the prop governor I ordered via a VAF group buy is about to ship. Oh, and I might have a line on a slightly-used exhaust system for about half the price of a new one. Not super confident that one will work out, though – it’s the Vetterman system I want, but it’s for an IO-360 in an RV-4. Part of me wants to think that the packaging in the cowling can’t be that different, but since Vetterman has different part #s for the two exhausts, clearly there are some differences. But maybe the RV-4 exhaust can be made to work…the savings would certainly be nice.